Poultry are like dogs when it comes to ageing: size matters. Smaller birds like bantams tend to live the longest and most productive lives, often reaching their mid-teens.  Heavy breeds like Orpingtons and Plymouth Rocks will be ‘elderly’ when they’re about six years old, but may continue to lay sporadically.

Commercial hybrids (Shaver Browns, Hyline Browns) are technically ‘light’ breeds, with an adult bodyweight of around 2.5kg. However, their life expectancy is generally only 3-6 years due to their genes. Hybrids are genetically programmed to lay early (from 18 weeks), almost an egg a day, until they are around two years old. They achieve all this while eating a highly economical diet that gives the farmer maximum eggs for their money. Longevity is not a breed characteristic of interest in commercial farming. 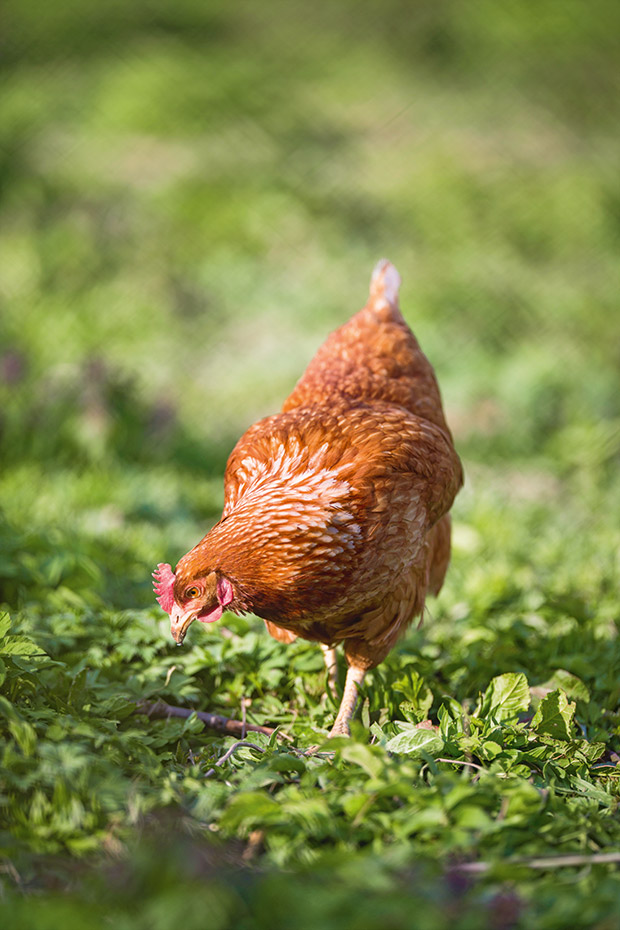 There are always exceptions. I’ve had a confirmed report of a Hyline hen reaching 13 years, thanks to a lot of TLC and no expense spared. But mostly, modern hybrids tend to succumb to reproductive issues. A common issue is egg peritonitis, due to their highly active ovaries. A hybrid can lay more eggs in their two-year laying cycle than many heavy breed birds will lay in a lifetime. Their systems are operating at an increased pace, and short lives are the price they pay.

CARING FOR THE OLDER CHICKEN

Most people who own poultry don’t cull their birds when they become unproductive. You may end up with a flock of geriatrics who require more care. When a bird becomes a pet, owners often go to great lengths and expense to keep their friends alive. The problem is, it’s difficult to assess when a bird is in pain as they do a good job of hiding it. In some cases I hear of, I recommend euthanasia. I believe knowing when to end a bird’s pain and say goodbye, before the bird becomes distressed, indicates a respectful owner.

Historically, farmyard hens and roosters were kept until their egg production slowed down. A top hen will only lay an economic number of eggs for 3-4 years. Once past that time, the number of eggs will get lower, and she will spend more of the year moulting (and not laying). If you’re looking at it in terms of monetary return, it’s hard to justify paying for 12 months of feed if you’re getting less than 100 eggs.

Hybrid hens on a commercial farm will lay more than 300 eggs in the first 18 months of their lives, and are then culled. A small fraction of the three million or so laying hens in New Zealand are rehomed. The lucky ones may live another 2-3 years before health issues begin to cause problems.

If economics is not why you keep poultry, and you keep birds into their senior years, these are some of the common health issues you’ll see:

1. Ensure access to a good quality, balanced poultry feed, and clean water, 24-7. If you can keep older poultry separate from the rest of your flock, give them Pullet or Grower feed as they don’t need the high levels of calcium in Layer feed.

2. Many older birds get arthritis or articular gout (inflammation of the joints). Have a range of low, wider perches or stairs to help old birds get off the ground and away from cold draughts at night.

3. Regularly apply a coating of petroleum jelly to the scales on their legs. This suffocates any scaly leg mites, but also helps to keep the scales supple, and has a mild anti-inflammatory action. 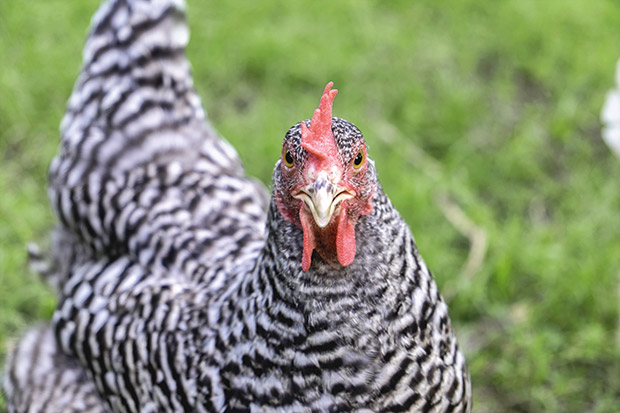 4. Check that the claws are not too long (perhaps due to less scratching) – trim with dog nail clippers but avoid the ‘quick’ or it will bleed.

6. Offer apple cider vinegar in water for two days a month to help with any gut issues (2ml of 10% vinegar to 2 litres of water).

These issues may be found in young birds too, but are a common cause of death in old birds. 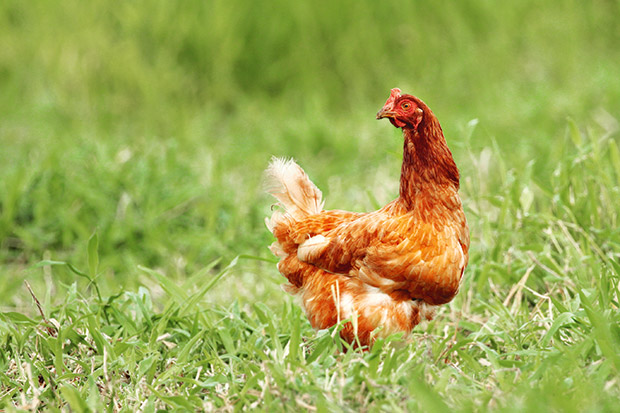 More stories you might like:
Case study: How a maternity bra helped give Rose the ewe an udderly happy life

Older hens and roosters don’t need the high levels of calcium in Layer feed, which can cause kidney damage. Feed them a Pullet or Grower feed, if you can feed them separately from your laying hens. A 16% protein ration also reduces the likelihood of visceral gout. Don’t offer additional oyster grit or egg shell supplements.

Excess protein, in the form of amino acids, can build up in the blood. This uric acid crystalises as a white deposit over the membranes surrounding the heart, joints, air sacs, liver, and inside the kidneys. This can be fatal, causing sudden death when kidney tubes become completely blocked. Stresses, like a move, a shortage of water, or starting to lay, can exacerbate a blockage. 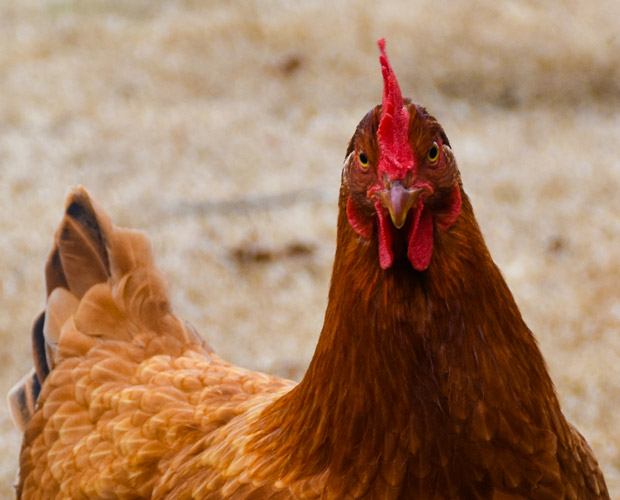 A bird without water for 24 hours or longer can suffer kidney failure. Another issue is articular gout, which is similar to visceral gout. Chalky urate deposits cause joints – most noticeably the feet and legs – to swell and appear deformed. It restricts a bird’s mobility, causing weight loss (as they are physically unable to reach their feed), and depression.

Poultry are quite prone to various types of tumour. The likelihood of tumours increases as a bird gets older. Mareks disease can produce tumours in nerves, eyes, and ovaries, and is more common in young birds (under six months). Lymphoid leucosis is a virus which causes tumours in birds, usually in those six months and older. It can be transmitted from hens to chicks via the egg, and between birds.

One manifestation – called Big Liver disease – causes the liver to swell with white nodules of tumours. It can become so big, it fills the abdomen. The bird may have a very pale comb, depression, appear very full in the abdomen, and be unusually heavy compared to birds of the same breed/size. There is no cure, and it’s often not detected unless a necropsy is done.

This can cover a range of conditions which may affect the ovaries, the shell gland, and the oviduct. The rate of egg production slows year on year from the first laying cycle, when egg numbers will be at their peak. Older hens become more prone to reproductive problems, which are often fatal. Egg peritonitis can be caused by egg yolks which, when released from the ovary, slip into the abdominal cavity instead of going down the oviduct. The yolks can accumulate in the abdomen, and often cause an infection. Some birds cope, but usually the egg material becomes infected and the bird gets septicaemia. 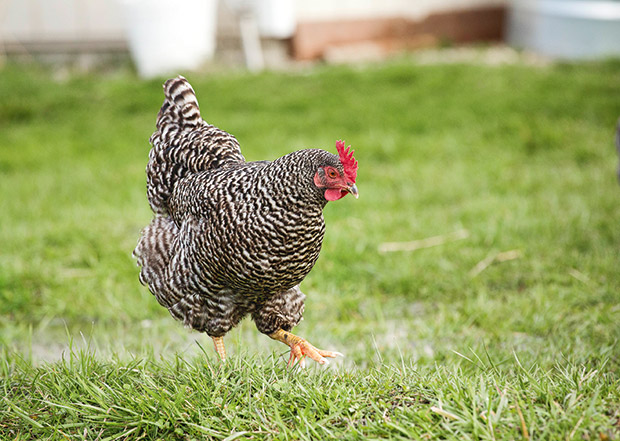 Inflammation of the ovaries or oviduct can sometimes be successfully treated with vet-prescribed antibiotics. The laying of misshapen, thin-shelled, or shell-less eggs can be an indication of failing reproductive organs. However, if the hen remains alert, happy, and is eating well, it’s possible she can carry on. A non-functioning ovary (hens have two ovaries but only one works) may result in a hormone imbalance. Her behaviour and appearance may become more rooster-like, and she may attempt to crow.

It is a breach of the Animal Welfare Act to abandon an animal. It might appear at first glance that poultry you see living on the roadsides or in parks are ok. But we know from animal welfare volunteers around NZ that this isn’t the case.

Dumped birds suffer, then die. They struggle to find food. They are riddled with mites and parasites. They are easy prey for predators like dogs, cats, ferrets and stoats. They are often found with infected wounds, or old healed injuries, possibly inflicted in dominance fights that take place every time a new bird is dumped. What you don’t see when you drive past are the birds dying or dead in the undergrowth.

WHERE TO FIND HELP

If you can’t cull a bird, get someone to help you:
• ask your neighbours
• find one of the many poultry groups around NZ on Facebook
• get in touch with your local poultry club, www.nzpoultryassociationsinc.co.nz

TIP OF THE MONTH

It’s important to ensure your flock always has access to plenty of fresh, cool water in a clean container over the summer months. If a chicken’s intake of water is decreased, its feed intake will also decrease. This can lead to a reduction in egg production. It’s also important to make sure that chickens have shaded areas on hot days.