How to protect stock and property on lifestyle blocks SPONSORED 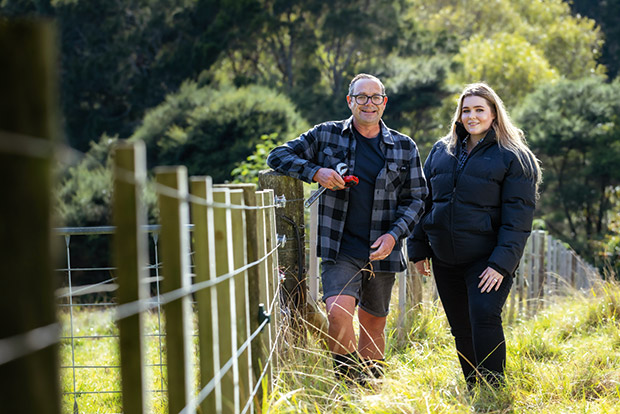 Early on a summer morning a few years ago, a central North Island lifestyle block owner woke up, went outside and noticed most of his sheep were missing. There was no damage, no evidence of any interference on the property, and no witnesses.

Suspecting theft, he reported it to the police, who confirmed there was a massive rustling problem across the region, with hundreds of sheep disappearing from other properties that year. If the stock had been stolen, the police said it was most likely done through a slick operation involving dogs, trailers and yards. But without any evidence from security cameras or witnesses, it would be almost impossible for the police to recover the sheep.

It may be unfortunate, but incidents like this are common in rural communities, where insufficient security and few people make it easy for thieves to steal stock and property. Many lifestyle block owners believe stock rustling and property theft are phenomena limited to big farms with hundreds of animals. In reality, rural thieves do not discriminate, and any property with livestock and farm machinery can be a target.

According to Federated Farmers, livestock theft costs the rural community $120 million every year, although much of it goes unreported. FMG’s lifestyle insurance specialist, Montana Kerr, says the frequency and costliness of these incidents mean it’s critical for property owners – whether they have 50 hectares or two acres – to ensure their security measures are robust enough to protect stock and possessions.

SECURITY ON THE BLOCK

Lifestyle block owner and chef Michael Van de Elzen owns several cows and sheep on his 5.2-hectare property near Muriwai, northwest of Auckland. Although he has few animals compared with a big farm, he remains vigilant about security. He’s installed motion-sensing cameras and sensor lights around buildings and put padlocks on virtually everything that opens and shuts, especially places where tools and machinery are stored.

“It’s crucial because, as anyone who owns a lifestyle block will know, the correct equipment and tools are a huge investment and need to be kept safe,” he says. 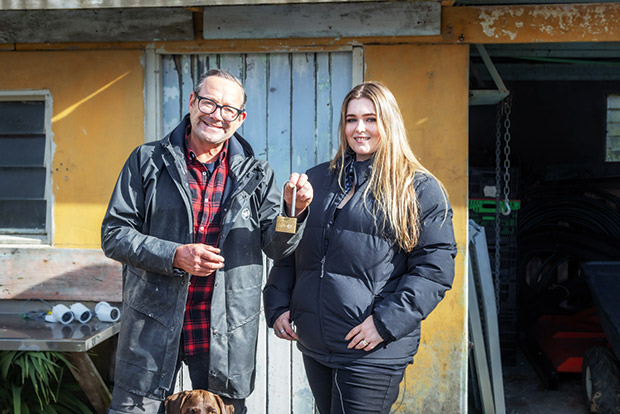 Michael has put padlocks on everything that opens and shuts on his block.

Michael says adding good padlocks should be the very first priority for new lifestyle block owners. “You can put these in immediately as a first measure and then look into other options like security cameras and sensor lights,” he says.

Even if a new property or farm comes with suitable padlocks, Montana says it’s crucial to replace them. “Definitely the first thing to do would be replacing the locks in case there are any keys held by previous owners or people that have had access previously,” she says.

Statistics have shown the most commonly stolen items from farms were quads and farm bikes. Alarming news reports have identified a link between high fuel prices and an increase in the theft of petrol and diesel – another reason for block owners to install suitable padlocks on fuel sheds and tanks on their properties. 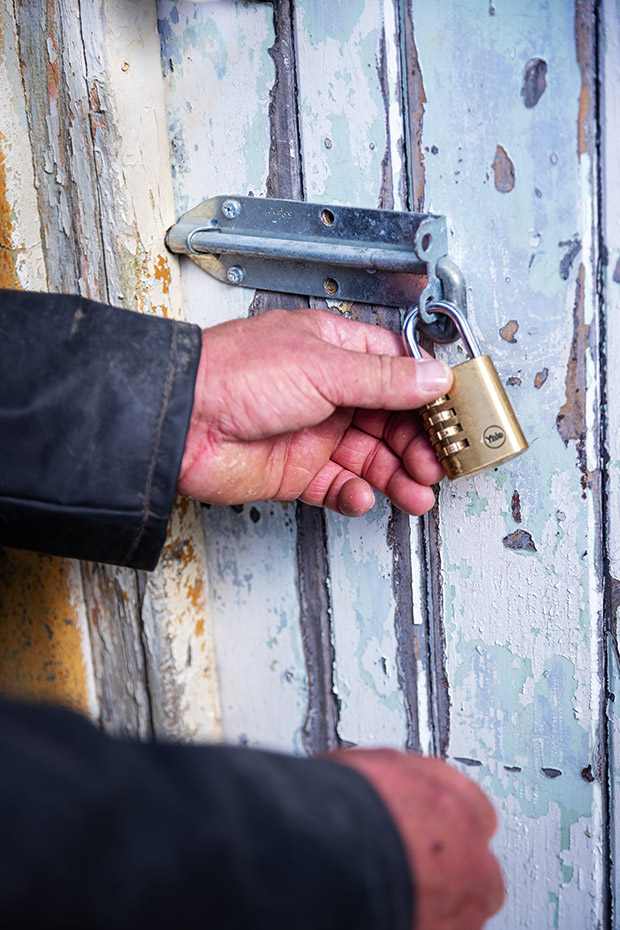 Locks on machinery, tool and fuel sheds are essential.

But perhaps one of the most effective security measures is also one of the most enjoyable: keeping a dog. With their keen hearing and loyal nature, most dogs are exceptional at detecting people entering the property and will act as a natural deterrent to thieves.

Michael agrees that dogs are essential on lifestyle blocks and his German shorthaired pointer, Hector, is constantly helping out. “No one is able to come down the drive without Hector letting us know. Hector is more of a lover than a fighter so isn’t particularly scary, but he’ll let us know when we have visitors – especially handy at 3am in the morning.”

While Michael hasn’t had any thefts from his property, he often keeps an eye on local Facebook groups just to make sure there are no suspicious reports in his community.

THE IMPORTANCE OF FENCING

Although the prevention of stock rustling should be a top priority for lifestyle block owners, it’s not only theft that puts livestock and property at risk. Large animals can be a liability simply because of the damage they can sustain and inflict in the wrong environment. For example, if a cow were to escape a paddock and stray onto a nearby road, it could put itself and motorists in serious danger and cause considerable damage.

Because the cow owner could be liable, Montana says this highlights the importance of robust and appropriate fencing and animal enclosures on rural properties to prevent stock from wandering into areas where they can cause damage. “We talk to many of our clients about fencing because of how important it is and how easily livestock can escape,” she says.

On Michael’s block, he’s installed post-and-wire fences around the property, along with electric fences separating the paddocks. “We also have a chicken coop and pig pens, although we don’t actually have any pigs at the moment. The chickens are in mesh fencing as Hector would love to find his way in.”

He says the most important consideration is to make sure the right fence is installed for the right animals. “Not all fencing is created equal and what might work for cows, won’t work for pigs so it’s important to make sure you get advice on the differences.”

Montana agrees, saying that certain animals like deer and goats can escape a standard fence for containing sheep, while cows can easily buckle battens and pop staples on a wire fence just by leaning on it. “We encourage people to have electric fencing for animals like cows, because they can bust through wire fences very easily.” 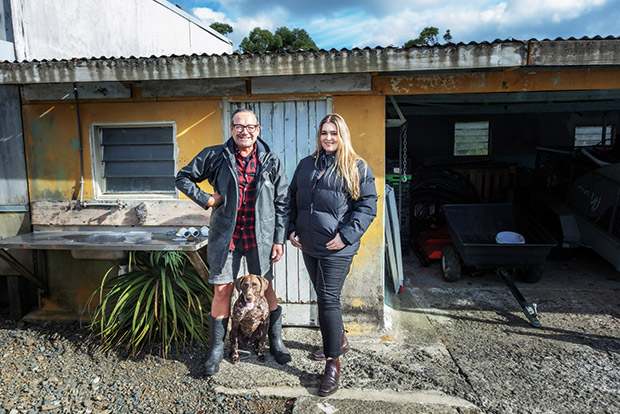 Michael, Montana and Hector, the German shorthaired pointer, who is fantastic at alerting the household to visitors.

Along with installing fencing, it’s crucial that property owners regularly check for damage and faults, particularly after extreme weather. Michael says he checks his fences once a month or after a storm to see if any need repairs. For electric fences, he uses a device called a fault finder, which can identify and locate a power outage in a section of the fencing.

“Most of the time it’s best just to have a look around the paddock before you move livestock,” he says.

However, it’s possible that a property owner does all the right things, and animals still manage to escape and cause damage to neighbouring properties. In such a case, Montana says FMG’s Liability cover has a moral obligation policy which would indemnify claimants.

“If you’ve done everything in your power to mitigate any risk and the stock still manages to escape, we can pay up to $5,000 per claim. Just make sure you take reasonable care with your fences. Walk around the paddocks, check for damage and check if the power in the electric fence is on.”

THE LAWS AGAINST LIVESTOCK RUSTLING

In 2019, the government passed new laws to crack down on the growing problem of livestock rustling. The Crimes Amendment Act makes theft of livestock or any other farm animal an offence with a punishment of up to seven years in prison. It also introduced a potential 10-year prison sentence for anyone unlawfully entering agricultural land with the intent to steal livestock or to act unlawfully against buildings or machinery.

The bill was passed with unanimous support from politicians and agricultural groups, with Federated Farmers revealing one in four of its members had suffered stock theft in the past five years.

As New Zealand’s leading rural insurer with over 117 years of experience, FMG can provide you with specialist advice and award-winning insurance for your lifestyle block.