Inside a home-turned-gallery café: A nomadic couple return to Stratford and launch the Fenton Street Arts Collective 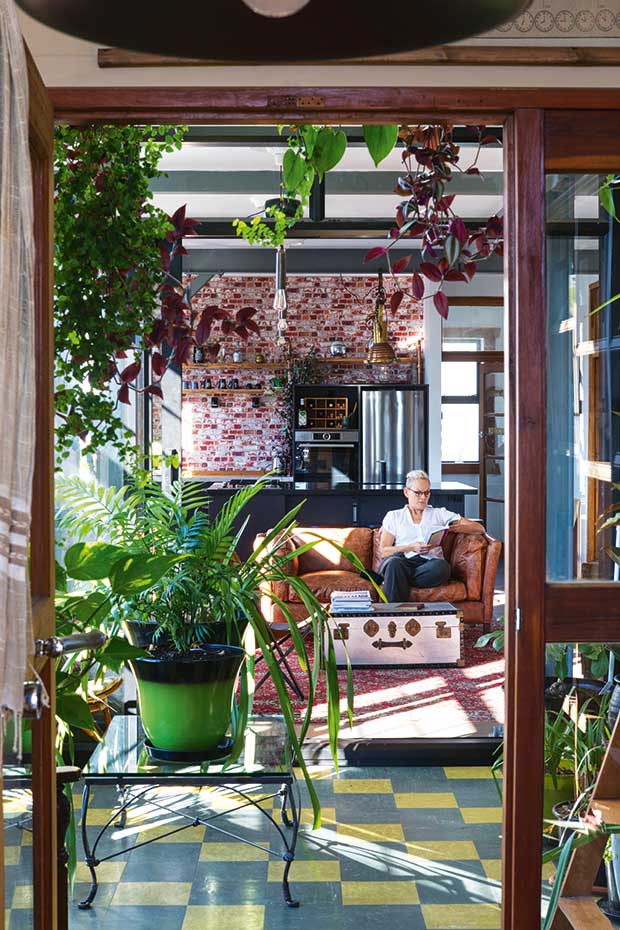 Painter Jo Stallard and her partner, writer and poet Stuart Greenhill, are careful with the plants growing in their home’s “green” space. “Bringing nature into a home is bringing in life,” says Stuart.

A heritage building in need of revival brought this creative — but nomadic — couple back to their home town after decades away.

It began with buckets of damson plums. Later came quinces and a couple of wild ducks. The most recent offering was a goat’s hindquarters.

These are just some of the gifts Jo Stallard and Stuart Greenhill have received from locals since they’ve returned after 40 years to their home town of Stratford.

“According to the person who gave it to us, goat is the only way to make a good curry,” explains Stuart. 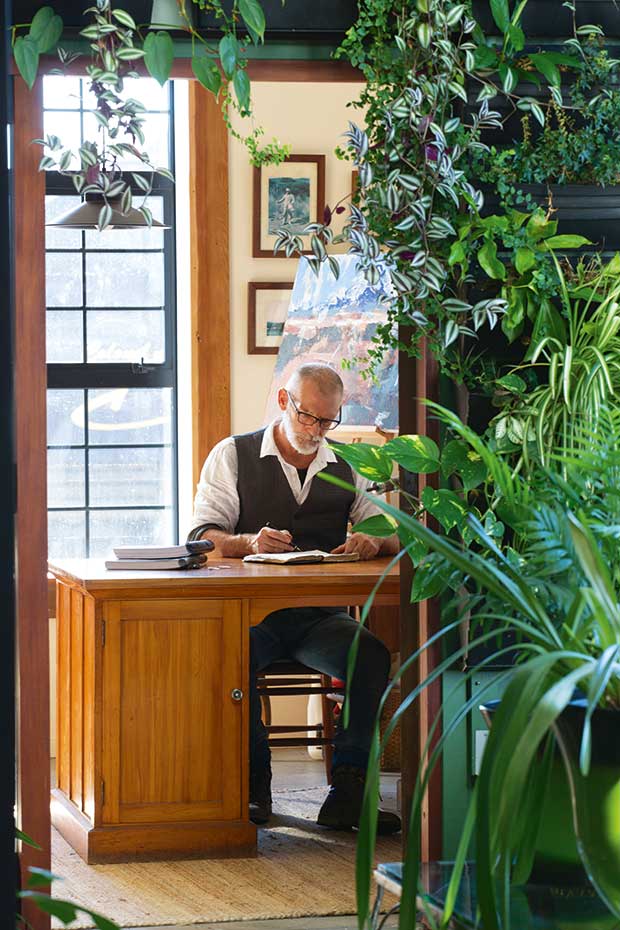 In planning the remodel, Stuart made sure the double-glazed windows in his den were “extra thick” to ensure the space was quiet enough for him to write.

The couple, both in their late 50s, have been together since their teens and grew up in the small rural Taranaki town — Jo’s parents were farmers, and Stuart’s dad was a stock agent. When they were in their early 20s, they left Stratford with their children, Christopher and Adrianna, to study art at Canterbury University.

But life was tough; the children were young — three and 18 months respectively — and money was sparse. For three months, the family lived in a Kombi, Stuart snaring rabbits for the family to eat.

After graduating, Stuart and Jo needed jobs — fast. “The quickest way to get work back then was to teach,” says Jo. They returned to New Plymouth, both teaching English, art history and classics. (Jo also teaching drama.) After a decade or so, they bought a block of land at Brixton, south of Waitara, to grow erica and boronia for export to Japan (Stuart having spent three years on a diploma of horticulture when he first left school). Three years later, they were on the move again — to Tauranga.

More stories you might like:
New trailer for Richie McCaw documentary shows former All Blacks captain's personal side

“We bought the worst café and recreated it,” says Stuart. “And we thought teaching was hard,” adds Jo.

But by now, they were developing their groove — finding a creative venture, pursuing it for a while, and then returning to personal projects. After Tauranga, they headed to the Marlborough Sounds to write and paint, then spent a year in Chiang Mai, where Stuart finished his satirical novel Fog (soon to be published by London’s Austin & Macauley).

In 2013, they returned to Tauranga when a property developer asked them to help design the interior of a development on Cameron Road. The restaurant/café was part of a complex including a motel, medical rooms and pharmacy. They stayed for another three years before taking on another project — one that would bring them back to where they started. 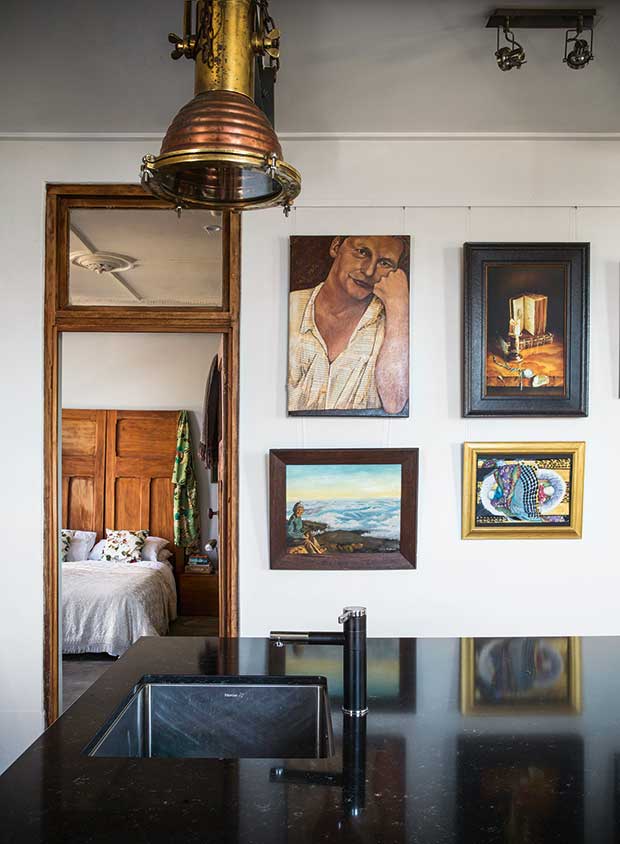 Jo’s artwork is displayed throughout the home. She specializes in oils, mainly portraits. “I am drawn to people,” she says, although she has recently been commissioned to paint landscapes.

Egmont Chambers in Stratford’s Fenton Street was in a bad way. A warren of accountants and lawyers offices, it required significant work — including earthquake strengthening — to salvage it. But Jo walked in and fell for the quality of its natural light; the view of Mt Taranaki sealed the deal. It would be her art studio.

The two-storey building was for sale for $159,000. She cheekily offered $50,000, which was accepted. New Plymouth architect Jono Murdoch was briefed to design a loft-style apartment upstairs. 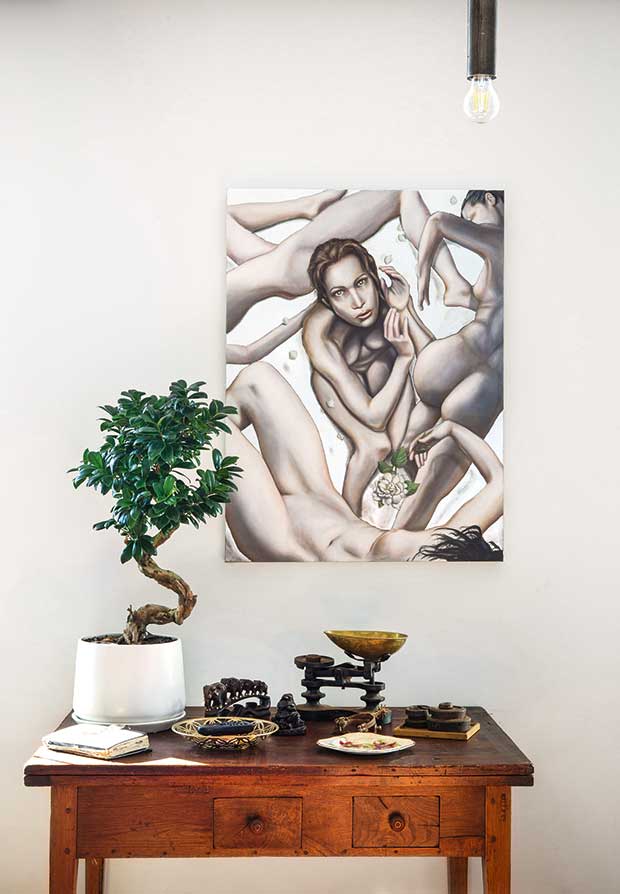 The painting by Jo above the table is called Not Woman Just Me and celebrates the 125th anniversary of women’s suffrage.

The home includes a large bedroom, open-plan kitchen/lounge, a bathroom, Jo’s art studio, Stuart’s writing den and a green space — a council requirement. Strong coastal winds meant an outdoor area wouldn’t get much use so Jono designed a glazed-in room with a skylight that opens.

Many of the features are restored versions of the originals. The green and grey floor tiles in the green space are authentic and look good now that the “hideous carpet and horrendous glue” has been removed. Stuart sanded back the rimu and matai joinery and doors meticulously, while Jo repaired and repainted the plaster ceiling roses. 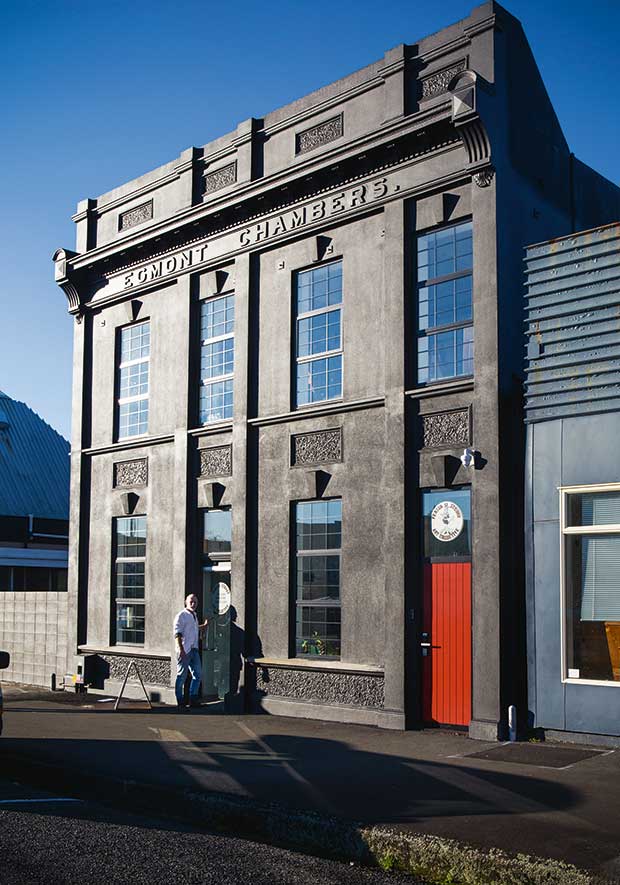 The old chambers had to be earthquake-strengthened when it was overhauled. “The renovation has fascinated people,” says Jo. “I usually ensure the bench is wiped and the bed made as they love to see upstairs as well as down. It’s all part and parcel of it.”

With the upstairs completed in February last year, the couple developed the 67-square-metre downstairs area, capitalizing on the building’s commercial zoning by opening a gallery and café. They called it the Fenton Street Arts Collective.

Although it wasn’t meant to be a café; the original concept was to promote the gallery by offering espressos to visitors as they wandered about. Shakespeare’s “doomed lovers” inspire Jo’s paintings. Here, she works on Ophelia & Hamlet in preparation for a solo exhibition in Hawera in August next year. Behind her are portraits of two of her grandchildren, who live in New Plymouth.

Stuart and Jo had had a bellyful of the hospitality industry, plus they thought Stratford already had enough cafés.

“But people kept asking for food,” says Stuart. “So we gave in on one condition: no chips, muffins or scones.” And word has spread. Fenton Street now offers monthly dégustation dinners, run by Stuart’s brother Ken — a chef based in Tauranga — that are booked out for a year.

Stuart and Jo estimate they’ve spent more than $500,000 over three years on the project. But the result is an award-winning home and business — this year the rebuild won the Western Institute of Architects addition and alteration award. 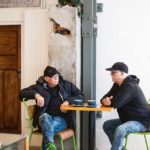 Locals Trevor Hook (left) and Stephan Dyer solve the world’s problems over coffee in the café. Stuart came up with the idea of “embedding” the concrete pillar (behind them) with books. It makes an excellent plant stand. 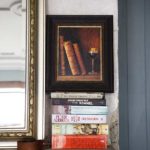 Just a few of the hundreds of books on history, art and literature owned by the couple. 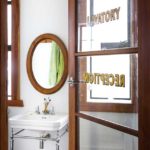 Original fonts have been reproduced to keep the feeling of the era.

“It is our best project so far because we’ve had full control,” says Stuart. “It’s home. It’s our base now. And it’s also a gallery with a dedicated studio for Jo.”

Jo says she is relieved to have finally emptied boxes kept in storage for so many nomadic years. Jackson Prestney on the steps that lead from the café up to Jo and Stuart’s apartment. Each step bears the name of an author or artist who once lived in Stratford. Stripping back the timber and concrete floors was part of reclaiming the building’s heritage.

“The project reaffirms what we believe — getting back to honesty, and to nature,” adds Stuart, and now that it’s finished, they have more time for their creative pursuits.

Jo is involved in the local theatre and with mentoring young artists and is preparing for an exhibition in Hawera next year. 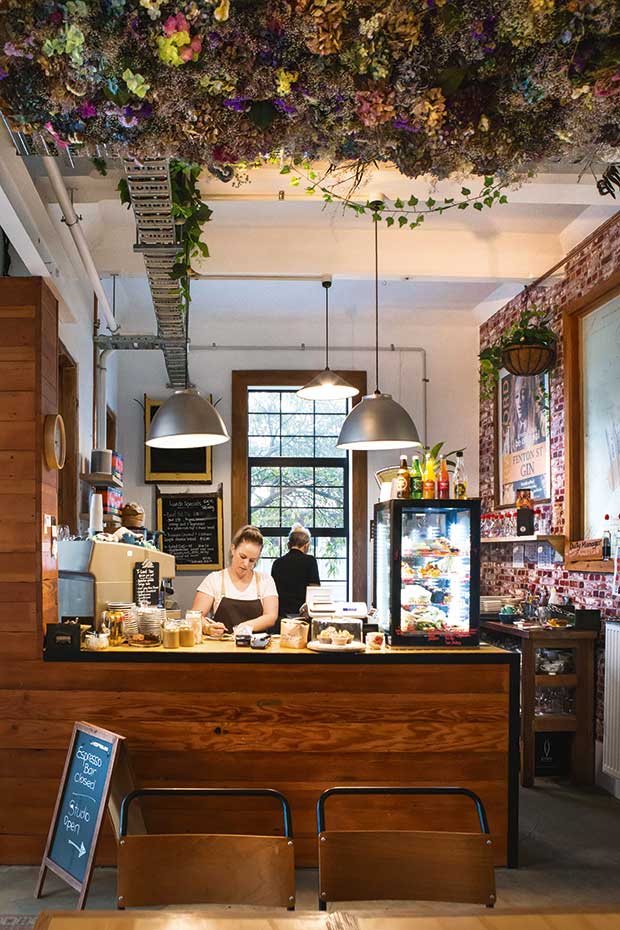 Jo with café manager Amelia Lett. Jo’s sister also helps out in the business a couple of days a week.

Meanwhile, author and poet Stuart is telling the stories of local men in his verse, which he’ll present at the week-long celebrations for the building’s 100th birthday next March. He is also distilling gin, a popular-with-locals sideline that gives Fenton Street a point of difference.

And those damson plums? They made a mean vodka. “Squeezed from angels,” says Stuart of its taste. He’s been told he can pick his own next year, which he trusts is a sign that the couple — who were away from their home town for decades — are again considered locals.

BRING BACK THE BARD

On Jo and Stuart’s suitcase-cum-coffee-table is a copy of the Merry Wives of Windsor. It reminds Jo of her aim to direct the Shakespearean comedy in this Stratford (not-upon-Avon). The Bard has inspired many of her artworks and led her to become involved in the Stratford District Theatre Trust. 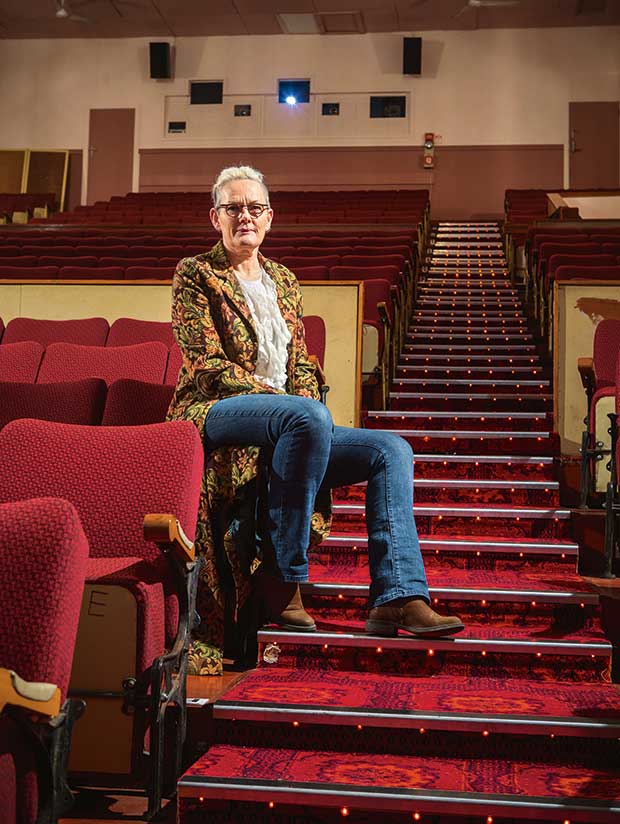 It’s coming up three years since the couple returned to Stratford “but this will be our base. If we decide to go, we will always have Fenton Street to return to,” says Stuart. “Stratford is like my grandfather’s spilt-cane rod and wooden reel. There’s an integral truth in those materials, just as there is in the fabric of our provincial towns.”

When she taught at Spotswood College, Sacred Heart and Girls High in New Plymouth, she was involved in the Sheilah Winn Shakespeare competition, annually and eagerly fought out by secondary schools nationwide.

This year she judged the competition, in which students perform a scene from a Shakespearean play. She also encouraged pupils at the local school to perform at Stratford’s TET Kings Theatre instead of the school hall. 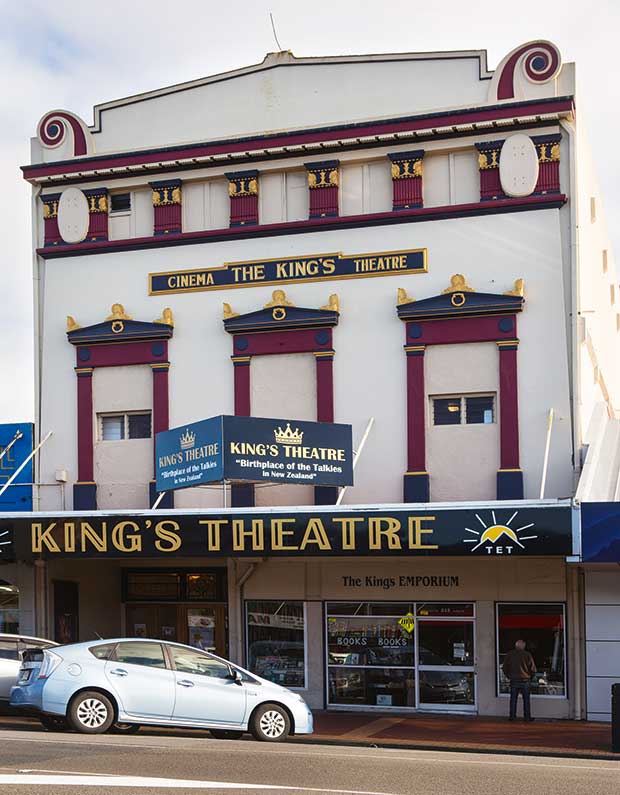 The 100-year-old TET King’s Theatre was the first in the country to show “talkies”.

The Stratford District Theatre Trust is upgrading the historic building but wants to maintain its formal dress circle and traditional seating. The theatre regularly shows movies, and still has a screen on a pulley system that can be hoisted for stage productions. Earthquake strengthening is the first step.

“We want to revitalize and reutilize the theatre,” explains Jo. “We’re planning for its next 100 years.”

Stuart, an amateur distiller, batch-produces three gin blends — The Artist, The Novelist and The Poet.

Ginger, nutmeg and the peppery herb horopito are used in The Artist, The Poet has hints of orange and lime, and the Novelist is infused with honey. 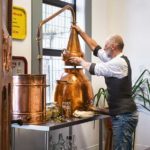 When Stuart’s not writing or helping out in the café, he’s usually making gin or fly fishing the Patea River, which is full of brown and rainbow trout. 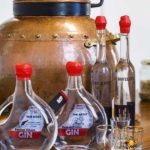 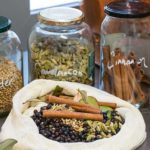 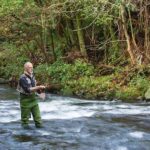 “Each batch of The Poet and The Artist are slightly different because the botanicals change during the season,” he says.

The Novelist, however, is flavoured with local honey, the taste of which doesn’t alter. About twice a week, he makes the gin in a 50-litre still.

“It is gratifying people like it enough to pre-order,” he says.