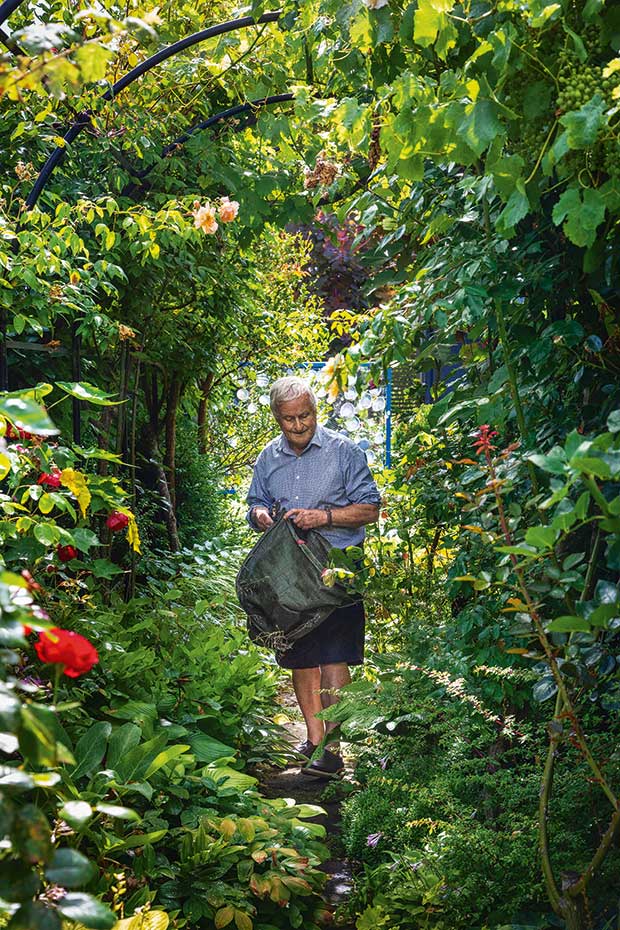 Renowned gardener Gordon Collier is red/green colour blind — but it isn’t the reason he refuses to plant by painted numbers in his small suburban garden; he prefers to mix it up a little.

Here is a man who will lead you up the garden path — but only in the literal sense, of course.

At 84, gardening expert Gordon Collier still has a trowel in his hand and a glint in his eye. He’s just received news that his Taupo garden, Anacapri, has been awarded six stars from the New Zealand Gardens Trust. He’s pleased as punch naturally, but he’s not about to hang up his sun hat.

Here is a man who, over a lifetime, has given his everything to five gardens. He counts the serious veggie plot at his one-room school in Bells Junction just as much as he does Titoki Point, the 0.8-hectare garden he crafted on the Taihape farm where he grew up. 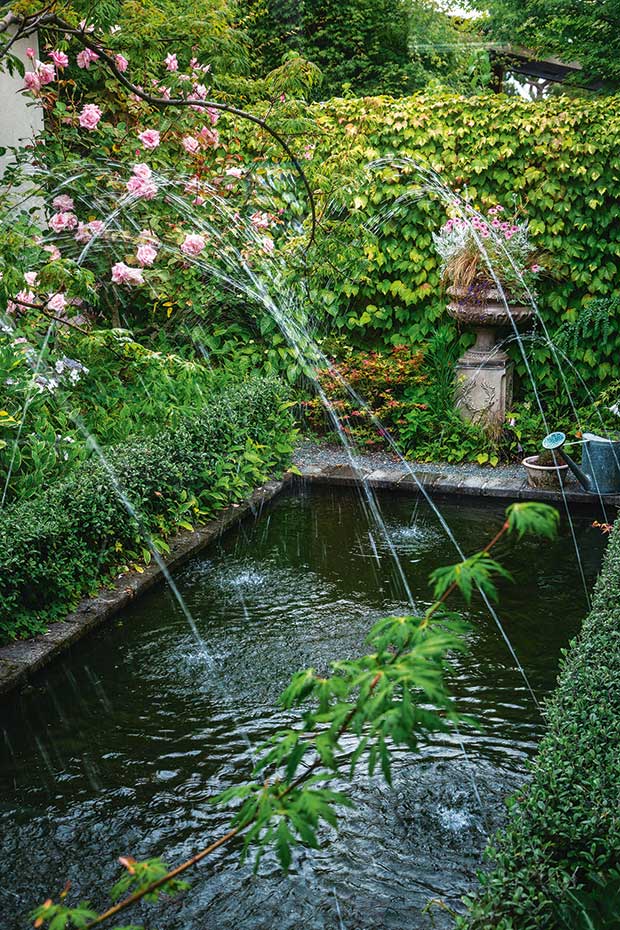 The pink rose ‘Jean du Cher’ brings pretty colour to the fountain garden at Anacapri, where an antique marble urn is planted with pink petunias and grey-leafed geraniums.

By the end of his 35-year tenure, Titoki Point attracted more than 5000 visitors a year.

Now Anacapri has made it to that list — a less than 800-square-metre wodge of horticultural happiness that has emerged from the sand-and-pumice section at Five Mile Bay where Gordon and his late wife Annette moved 18 years ago.

Here is a man who has a voice and intends to use it. His training as a gardener, his loam-under-the-fingernails experience and his wry
way with words combine in daily missives sent to green-fingered friends, in articles for lifestyle magazines, in speeches delivered to venerable institutions and in books, written for family, community and the public. At 84, gardener and plantsman Gordon Collier is still at the top of his game and not about to hang up his shears.

Here is a man who has three children, 12 grandchildren and a list of friends as long as the giant himalayan lily that seeks the stars at Anacapri.

A man who has been made a member of the New Zealand Order of Merit, has a rhododendron named after him and who, by all accounts, has pretty much reached the zenith of what there is to achieve in his field.

Here is a man who could sit back and leaf through the pages of the family history he wrote for his grandkids and be satisfied. 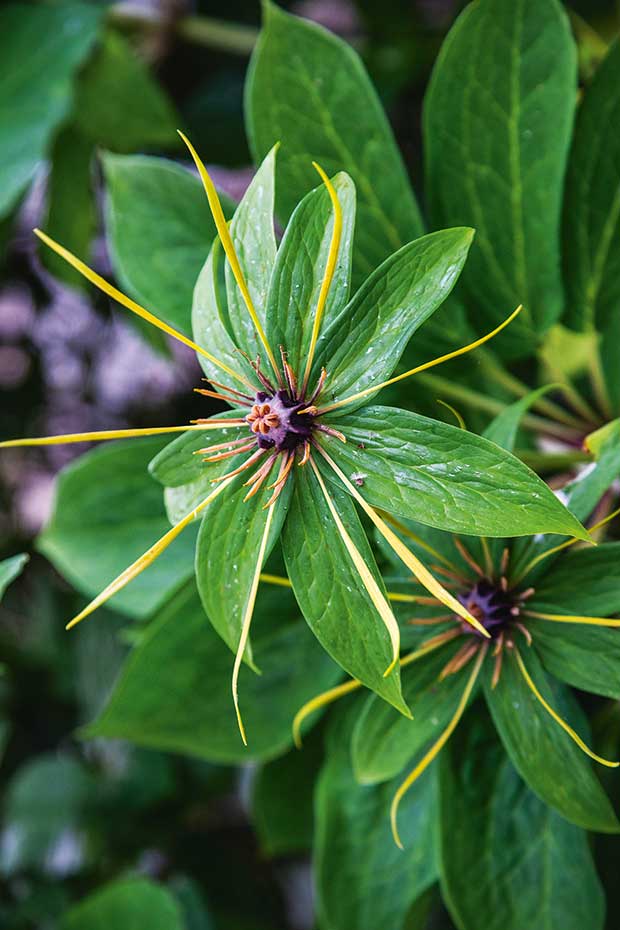 But no… Here is a man with a plan.

Just inside the front door to Gordon Collier’s home — a cottage painted in country blue and the colour of plum-heavy cab sav — is a sign that advises: Life is Short, Break the Rules. The rules that Gordon most likes to break are gardening ones. He is subversive in his milieu. “I like dead trees, trees that lean over the path to impede running visitors,” he explains.

He’s also no fan of the manicured lawn and has planted to excess so that, at Anacapri, not a groomed blade of that kind exists. This zealousness extends to the roadside berm where Heliohebe hulkeana, Euphorbia ‘Fens Ruby’ and dried briza grasses had the neighbour asking when this esteemed gardener was going to mow it. 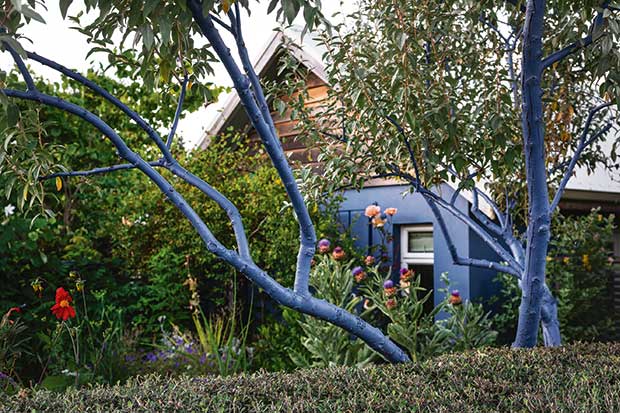 Gordon has named the garden near the cottage Blue Heaven for obvious reasons. The trunk and branches of an Elaeagnus ‘Quick Silver’ tree (initially thought to be dead) were painted blue to match this part of the house — but the tree sprung back to life unexpectedly.

“I’m of half a mind to take out the hedge and just let the front garden ramble all over the footpath,” says Gordon.

He’s joking of course because, although the planting at Anacapri may seem unruly, it is not unplanned. When the Colliers embarked on transforming this patch of dirt, Gordon scribbled his thoughts on paper before a friend, landscape designer Lesley Maughan, drew up the design professionally. 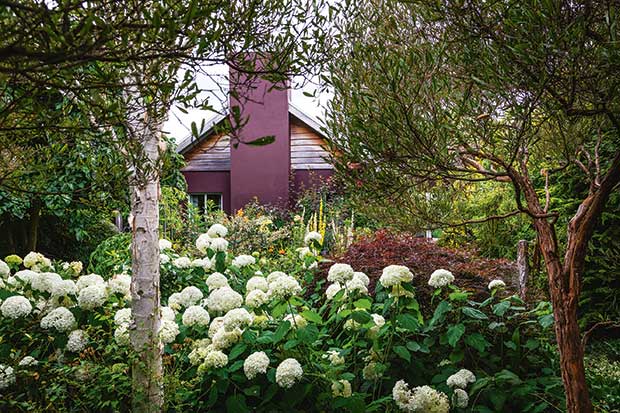 In the woodland area of the garden ‘The Dancing Girls’ (akeake) are appreciated by an audience of Hydrangea ‘Annabell’.

The house, designed by Whanganui architect Bruce Dickson, is laid out in two parts. The front guest wing and garage are separated from the main living zone by a glassed gallery where a linear water feature at right angles appears to run beneath it.

“It’s actually two separate ponds — it’s an illusion, they don’t connect,” explains Gordon. The garden that envelops it is made up of moods rather than rooms. “There are no ‘walls’.

More stories you might like:
Keyhole gardens: How this 1990s garden design is helping farmers combat extreme weather and climate change in the Pacific 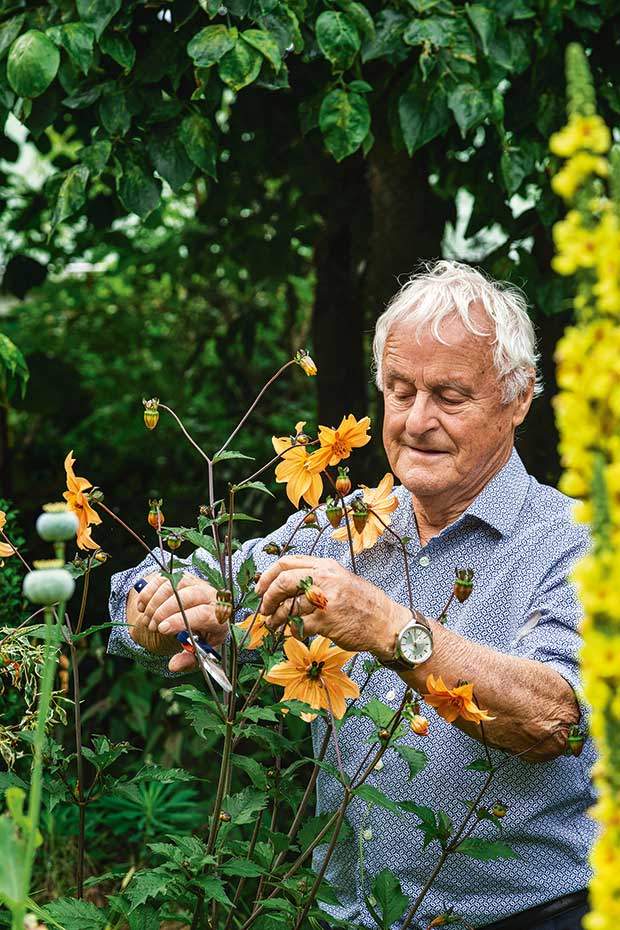 Each area is a different set of plants that merge into each other.” It’s a garden where the house is the fulcrum, like a bedroom chair swathed in layers of colourful, hastily draped clothing.

The only indication that the mood is changing is underfoot. The pathways morph from messy leaf-strewn gravel to groomed gravel to paving stones to full paving en route. 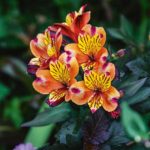 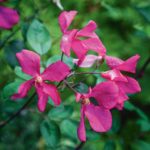 “I think that’s the only original idea I have ever had,” says Gordon.

After decades visiting properties the length of the country, both as a writer and a judge, he’s familiar with the inspirational touchpoints that New Zealand gardeners seem to favour.

“People are influenced by two major English gardens: Sissinghurst and Hidcote,” he says.

“They are certainly great gardens, and it’s good to get ideas from them, but I don’t believe in copying. That’s like plagiarism in plants and the gardens can end up like stage sets where the elements don’t gel.” A red hybrid tea in the rose arbour is underplanted with hostas and other woodland plants.

His observation, too, is that some designers often only explore a limited palette of plants — “about 12, which they push around like pieces on a chessboard”.

No one could accuse Gordon of that. Step out from the living room, and onto a pathway that loops around the property and there is suddenly no sense that you are a stone’s throw from the lake. The foliage becomes a fantastical forest all around. 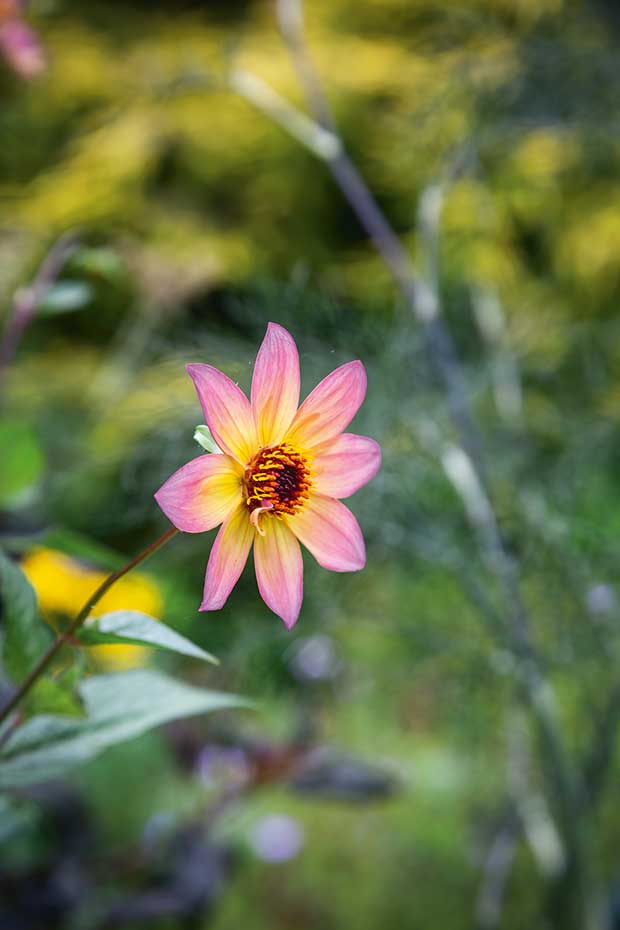 In each square metre there is texture and form in a density so intricate, it is hard to capture on film. Although the in-residence gardener does try, padding out in his pyjamas in the early morning light with his beloved iPhone to click away — “things are changing all the time”.

One of his favourite areas is the “native” garden he calls Going Bush. “It’s the smallest, shadiest spot but plant buffs tend to find it the most interesting,” he says. 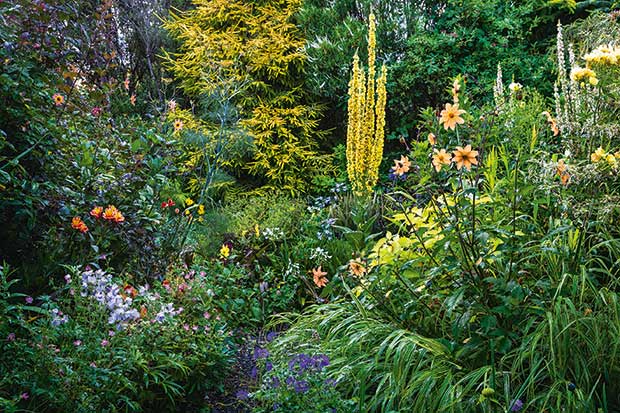 Trees, shrubs, orchids, mosses, lichens and fungi all tumble into the category and there are many plants gathered from visits to the Chatham Islands, including an Olearia traversiorum with its peeling bark which, incongruously for those who imagine a daisy as a
small, friendly faced flower, towers above the house.

More stories you might like:
How to make a homemade tea blend from herbs from the garden

“It’s the world’s biggest daisy,” reiterates Gordon. “There are 13,000 species in the daisy family.”

Visitors who take a slow amble along the path are usually accompanied by a preamble from the creator himself. 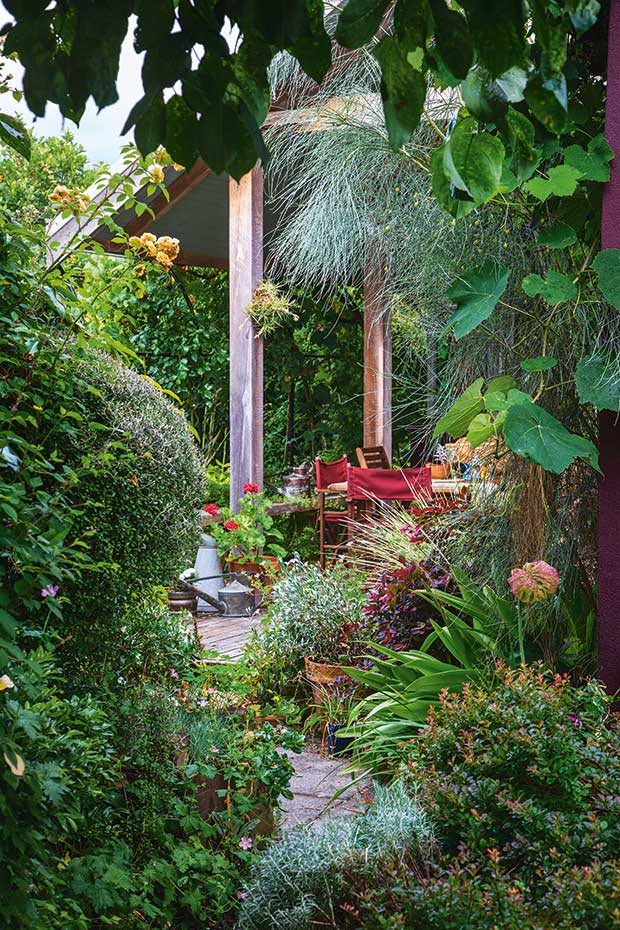 A glimpse of the front deck looking through the broom.

He points out weeds (“I don’t always pull them out”), found objects such as a stump he rescued from a paddock in Martinborough (“Prince Charles has a stumpery; it’s very posh”), common plants (“honeysuckle is so very English) and not so common ones (Lamium ‘Beecham’s White’, which grows in a border at the front of the cottage in an area called Blue Heaven). Here the trunk and branches of a thought-to-be-deceased quicksilver tree have been painted blue.

“It’s a bit eccentric I suppose,” says Gordon, “but why do the same thing? I like to inject some shock factor along the way.” 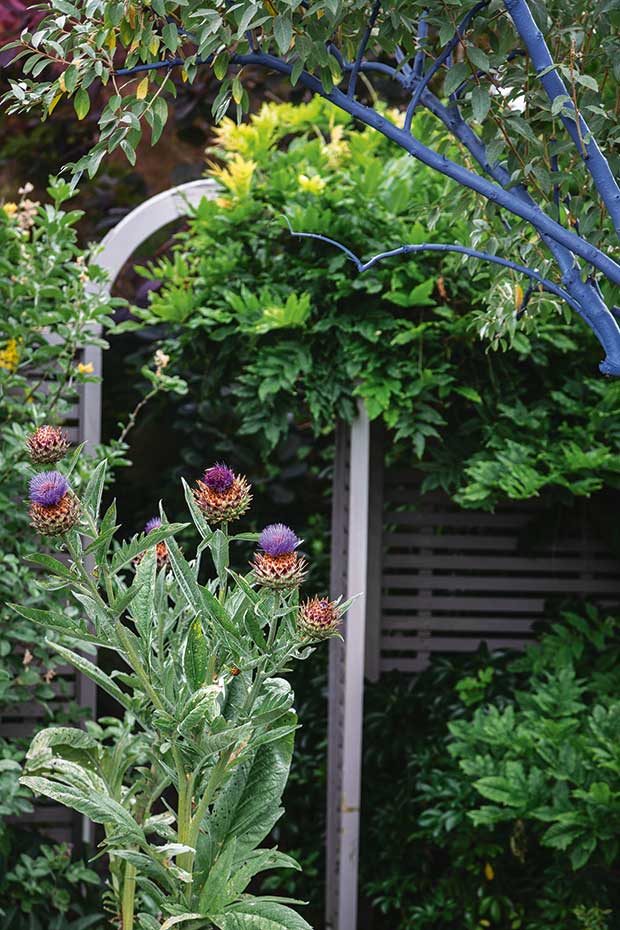 Despite such vagaries, and the fact his globe artichokes were quite dead but still in situ when the trust’s assessment team arrived, this tiny, detailed garden has now earned its stars — and its stripes.

Five years ago when his wife Annette succumbed to the bone-marrow disease myelodysplasia, Gordon knew life would never be the same. 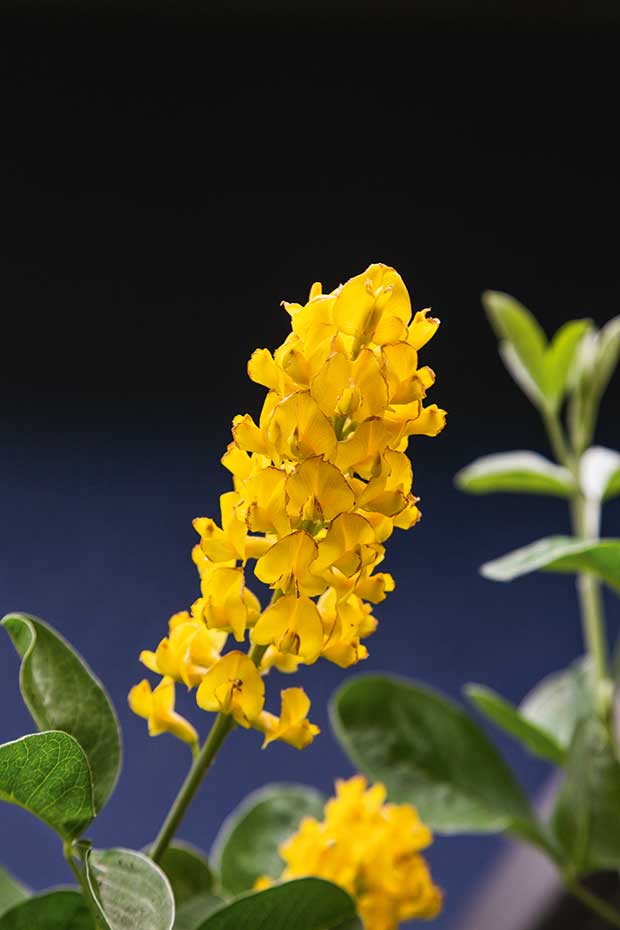 He wishes she was here to share in the accolade for a garden she helped inspire and create. But his dreams and his humour sustain him.

“The first fragments of a sixth garden are in my brain,” he says. He may yet return close to the family land where he was born. If he does, it can’t be long before those ideas are committed to soil.

Brilliant use of plants. The first time I visited, the entrance was massed with the healthiest New Zealand celmisias I had ever seen in cultivation. Helen has sold her famous show garden and made a new one in Monkstown, a suburb of Dublin, which is also worth a visit.

All gardeners should see this. It’s one to visit because it’s naturalistic and full of wonderful plants. The Dry Garden inspires all visitors and is appropriate for our changing climate.

3. The United States. Chanticleer, near Philadelphia

This has been called America’s most inspiring garden — plants, innovation, a breath of fresh garden ideas. Each of 20 horticulturists, not “gardeners”, is allowed to express their ideas. Their planting of large containers is exceptional — we don’t do this well in New Zealand.

My kind of garden. It has been designed by several famous designers and specializes in plants native to the Piedmont area. Trilliums and other wildflowers are to sigh for.

This Moorish paradise, where fountains play against the strict, geometric lines of the buildings, presents a dazzling picture. Unforgettable.