Down the hill in the old equestrian arena that Lynda turned into a French-style potager, there’s a shepherd’s hut dubbed “the bric-a-brac shack”.

Lachlan (3), Lucas (5) and Pebble the Ag-Day orphan make their escape through the ornate front gates. The children’s upcycled blanket jackets were a gift from Peri Gayford of the Gisborne Country Garden Club.

The Heathland wallpaper has a rabbit and pheasant motif, a nod to two of her vegetable garden’s most vexatious vandals.

“It’s where I hide all my most recent op-shop finds from my husband,” she jokes.

A library ladder for the snug above the bookshelves is the next project on Lynda’s list, “I’ve always fancied a cosy mezzanine floor,” she says.

Wild buttercups, bluebells and foxgloves. “I’m under strict instructions not to adopt any more animals, so I was chuffed when my neighbours Tim and Kate acquired their highland calf, Foxglove. I feed her over the fence.”

Hurricane Hallinan, aka the country’s liveliest gardener Lynda Hallinan, has whirled through her Hunua property giving it a spring makeover in time for another charity fundraiser. And she still finds time to write about it.

Lynda’s new cut-flower beds overlook the Hunua Ranges. The antique iron gates keep Pebble the pet lamb at a safe distance, or at least that was the plan.

Had my husband Jason Hinton been a loquacious sixth-century sage instead of a Westie civil engineering contractor, I suspect he’d have told Heraclitus to put a culvert in it. Sure, nothing endures but change. But the more things change at our home in the forested foothills of the Hunua Ranges, the more my husband wishes they’d stay the same. Even the trees can no longer be relied upon to stay put. When the hunchbacked ornamental Awanui cherry at our front door succumbed to silver leaf disease, it seemed reasonable – to me, if not my man – to track a digger through the paddocks to wrench out a mature horse chestnut to fill the unexpected vacancy.

You can never have too many harvest baskets or antique gardening tools, says Lynda. She keeps her collection in an outdoor nook that doubles as a floristry bench.

As an inveterate tinkerer, indoors and out, it’s little wonder we live in a state of flux. Gardens aren’t supposed to be static. So, last year’s pumpkin patch is this year’s poncy picking garden hedged with holly (Ilex x altaclerensis Hendersonii). There’s a serpentine boardwalk where the sunflowers once smiled, and my long perennial borders – the pride of 2013, when I unveiled a potager in our unused equestrian arena – had be sacrificed to contain a nasty outbreak of convolvulus.

“To plant and maintain a flower border is by no means the easy thing that is commonly supposed,” said the great plantswoman Gertrude Jekyll. I’m with Gertie. I’ve pulled mine out and put in a phalanx of stately ornamental pears, Pyrus calleryana Aristocrat, undersown with barley.

To be fair, Jason is no innocent bystander to this carousel of change. He started it. A week after we met, he hitched his teeny-tiny two-storey two-bedroom kit-set farmhouse to heavy-duty strops, hooked it to a crane and shuffled it 20 metres to the south east to clear a new building site. He imagined a mansion of American cotton-plantation proportions; a house befitting the majesty of our farm’s liquidambar-lined driveway. But while dreams are free, floor space isn’t. To date, the only foundations laid in the spot where that little house once stood were our wedding vows.

With an ever-expanding orchard of more than 300 heritage fruit trees, Lynda’s seasonal preserves have spilled out of her pantry and into an upcycled sideboard in the corner of her husband’s office in the stables. The scripture boards came from the decommissioned Presbyterian church at Tahunanui. “I have four of their pews, too,” says Lynda.

It has been seven years since I switched city life for the sticks. Our house is now home to two boisterous lads, Lucas (5) and Lachlan (3), four cats, a border collie, a pet lamb and a revolving cast of volunteer wwoof-ers (willing, and sometimes not so willing, workers on organic farms).

Frenchmen are our favourites. “Je m’appelle Lucas,” says Lucas, welcoming them into the fold. “Pepé Le Pew!” jokes Lachlan (he’s at that age when nothing, save an amorous stinky skunk, is funnier than a fart). “Qui veux manger le ragoût du lapin?” I add, for the only good rabbit in my garden is one simmered in a Le Creuset casserole with the last of the summer brandywines. Living the good life has its ups (tree-ripened Fortune plums, freshly dug spuds, no need for curtains) and downs (possums, pet sheep that pop their clogs and ropey cellphone reception). Since NZ Life & Leisure’s last visit, our fluffy silkie hens, the cutest of all chooks, have been plucked off, one by one, by hawks. We buy our eggs now.

We’ve also lost a geriatric dog and gained a gregarious hog. Pepper, a congenitally blind captain cooker, joined our kunekunes, Apple Sauce and Plum Chutney, in the orchard. Their job is to keep the grass down and hoover up windfall apples and pears to interrupt the codling moth lifecycle. But Pepper is a rebel. An abandoned piglet fostered by a city family before ending up in an animal sanctuary, that cunning swine repaid my kind offer of a forever home by immediately rooting up our house paddock, rendering it useless for haymaking this summer.

Jason was not amused, but our kunekunes – restrained by the rings in their noses – revelled in the turf war and have come to regard Pepper as their personal rotary hoe. I was raised on a dairy farm but my agricultural abilities haven’t progressed much. Indeed my stock-acquisition strategies – “I’ll take two pens of those beautiful brown ones thanks” – are enough to make my father blush when I start bidding at the Pukekohe saleyards.

The wwoof-ers’ lair in the converted stable block: “When we host international travelers, we warn them they’ll be bunking down in our shed. But it’s a pretty posh shed.”

Thanks to a combination of my free-range farming politics and fencing deficiencies, those beefy limousins now have the run of our place, along with a mob of motley sheep that wander our hills like Wordsworth poems. The local vet unkindly called them feral but I prefer prize-winning: my niece, Grace, has a clutch of Calf Club Day championship sashes courtesy of former Foggydale Farm orphans.

Change is good. Liberating, even. Would we sell up, shift and start again? Not on your nelly. Why move house when you can just move the furniture or dabble with the décor? Our kitchen has been wallpapered three times in as many years, and our shepherd’s hut – aka the bric-a-brac shack, a repository for my junk-shop finds – has had four paint jobs. It started slate grey with a skirt of snow-white chrysanthemums then morphed into a cheery cherry with beds of beetroot-red zinnias before an ill-advised autumnal experiment in electric orange. As winter gave way to spring, the tangerine tones clashed so badly with my candy-pink star wars magnolias that it was hastily repainted a tasteful shade of sage green.

Fear not the seven-year-itch. My husband might sigh – loudly – at my handwritten to-to lists but we’ve found our equilibrium. We’re content with our lot, and with working with what we’ve got. Said the thrice-married American psychologist Wayne Dyer: “If you change the way you look at things, the things you look at change.” GROW YOUR OWN CUT FLOWERS

My main project this spring has been establishing a dedicated picking garden, with five macrocarpa raised beds filled with achilleas, anemones, delphiniums, gladioli, larkspurs, love-in-the-mist, tulips and zinnias destined for the vase. It’s a total indulgence to be able to pick armloads of flowers for indoors without worrying about ruining your best borders, and I also sell cottage posies at our roadside stall at the front gate.

Plus this part of my garden has the best views over the Hunua Ranges, so I figured I was justified in blowing the budget a little with antique wrought-iron gates (my neighbour Alyson Wilcock at Pushkar Trading Company imports them from India) and an instant holly hedge from Twining Valley Nurseries, just down the road in Mangatawhiri. They grow “hedges in a hurry” to satisfy impatient gardeners like me. 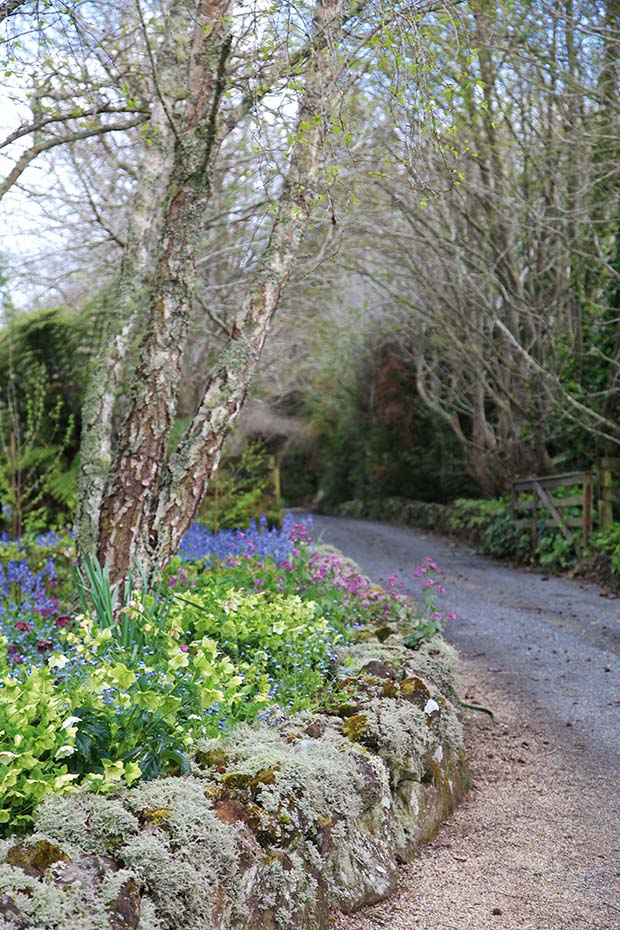 CUT YOUR LOSSES, ADMIT YOUR MISTAKES

* I have always believed that gardens have a five-year half life. In the early years, they just look better and better but then the problems start. Trees start casting shade on flowering perennials, shrubs can outgrow their welcome and hedges starved of sunlight suffer from middle-aged spread. It’s a good time to assess what’s working, and what isn’t.

* Don’t be afraid to wield a chainsaw. Of the 40 almond trees we planted seven years ago, 30 have just been given the chop because those 30 trees produced just eight nuts between them. They’ll make for a cracker of a Guy Fawke’s bonfire. I am persevering with my 10 monovale almonds even though it’s the hardest nut to crack, requiring five whacks with a hammer to liberate those marzipan kernels.

* Until this year, our garden has been 100 per cent organic but life’s too short to hand weed gravel paths and driveways, so I’ve started using herbicide, albeit reluctantly. And our lawn, which was perfect when we were married on it, now sports more creeping buttercup, dandelions, speedwell and clover than grass. I’ll apply a selective broad-leaf herbicide such as Turfix this spring, then resow.

Lynda’s garden at Foggydale Farm is open for the Franklin Hospice Garden Ramble, November 12 to 13. Tickets from franklinhospiceramble.org.nz or at the hospice shop, 27 King Street, Pukekohe, (09) 238 5082.