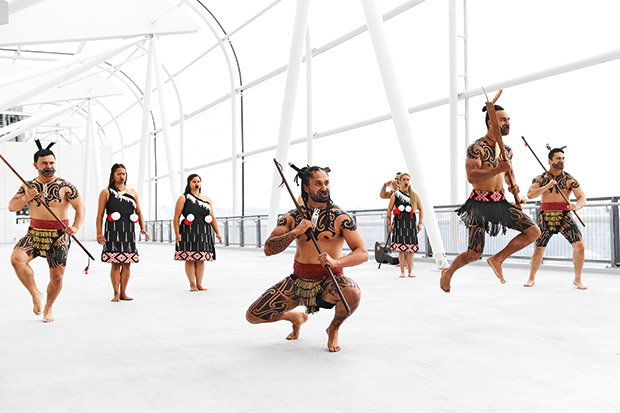 Annette and Tāpeta Wehi’s two adult sons, Enoka (far left) and Ngāpō (right, in the air), are among dozens who perform with their parents’ company, The Haka Experience. In pre-pandemic days, the troupe performed at Eden Park (pictured) in a partnership to broaden visitors’ understanding of Māori customs and language.

A couple, leaders of a multi-generational legacy, let the power of kapa haka take centre stage in life, love and identity.

When Tāpeta Wehi was a teenager, his maths teacher told him that kapa haka was a waste of time. “That kapa haka stuff will get you nowhere, mate,” he said. The comment was perhaps more encouraging than discouraging as Tāpeta returned to practice that evening. Four decades later, he continues to prove that kapa haka will get him everywhere.

“People think haka is just an angry war dance done by the All Blacks. But we haka to mourn, we haka to acknowledge, we haka at graduations — haka is breaking down barriers right across the board,” he says.

This story begins with Tāpeta’s late parents in Waihīrere, a rural settlement 16 kilometres inland from Gisborne. For Tāpeta’s mother, Pimia, kapa haka was as integral to life as food and water. When she fell in love with Ngāpō, a young man from Ōpōtiki, she encouraged him to learn to haka from the elders at Waihīrere Māori Club. In the 1980s, the couple relocated to West Auckland with their six children and started a pan-tribal team called Te Waka Huia.

For Pimia and Ngāpō, kapa haka was a way of life. And, with the launch of their performing arts company, Pounamu Ventures, it also became their livelihood. For decades, a young Tāpeta, together with his whānau, would spin words and messages into kapa haka compositions that would not only win trophies, but also shine a light on a Māori art form that was not yet mainstream.

There was little doubt that Tāpeta and his wife Annette, who he had (rather aptly) met through kapa haka, would build upon his parent’s legacy. One day in 2009, Pimia stood in front of the Te Waka Huia team and declared that their youngest son and his wife would take the reins. “I would’ve loved to have a normal life,” says Tāpeta. “But haka is in our DNA.” 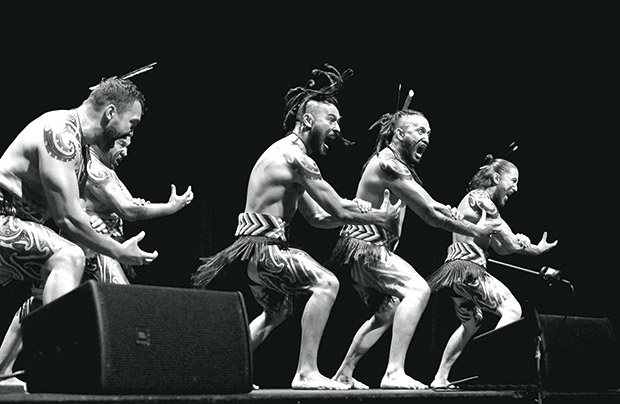 In 2020, Te Waka Huia was runner-up in the Tāmaki Makaurau regional kapa haka competition — a qualifying performance for Te Matatini.

And where there’s passion, there’s often victory. The Wehi family has won the most national kapa haka championships to date — two with Waihīrere and five with Te Waka Huia. But the spirit of what Pimia and Ngāpō created wasn’t just about competition, says Annette. “They believed that every person who came into Waka Huia, or ‘treasure box’, was a treasure on their own. Their goal was to tap into a person’s potential and let them be Māori. Kapa haka offered a space where you could come and speak your language — where you didn’t have to justify anything.

“They taught values similar to the 10 commandments of kapa haka, which is about manaaki [looking after people] and kaitiakitanga — to be caretakers of our language, our customs and our art form.”

Annette, who grew up in Whāngārā (north of Gisborne), was seven when she met Tāpeta at the Waihīrere Māori Club. Their paths crossed again 10 years later at a kapa haka festival. The pair, married for 23 years, now reside in Rānui in West Auckland. “We complement each other. As with everything in Māoridom, there must be a balance, with a female and a male element. When there’s too much of one or the other, things go wrong,” she says. This couple may be markedly focused on leading their team to victory at next year’s Te Matatini festival, an Olympics-equivalent for kapa haka, but there’s another dream at the helm of this waka. That’s to bring their art form, and thus Māori culture, to the world.

“We are mere caretakers of the language, our customs and our art form — kapa haka. Our role in this lifetime is to make it better for the next generations,” says Annette.

This idea was sown by Tāpeta’s father with his performing arts company, Pounamu Ventures. In the late 1980s, the Wehi family plied their trade with twice-daily kapa haka performances at the Auckland War Memorial Museum. Twice a day… for 14 years. “It was tough — we only had Good Friday and Christmas off,” says Tāpeta.

Driven by Ngāpō’s pioneering spirit, the Wehi family went on to compose and perform kapa haka for luminaries including Nelson Mandela and Bill Clinton, and represented New Zealand at the 1988 Olympic Games in Seoul. Tāpeta will never forget the time a burly German man walked up after a performance in Europe, his face wet from tears. “I don’t know why I’m crying,” the man said in a thick German accent.

More stories you might like:
International cheese expert Juliet Harbutt on why she has returned to the Hawke's Bay to set up Hunter Gatherer food, wine tours and cheese tastings

“I knew why he was crying,” says Tāpeta. “It was wairua [spiritual essence] that hit him in the heart. To be able to touch people in the heart is something else.”

As his parents grew older and priorities shifted, the world turned its eyes to Tāpeta. In 2018, he created The Haka Experience, a tribute to what his father began those years ago. With overseas travel currently off the table thanks to the pandemic, it’s an ever-evolving venture that relies on Tāpeta’s ability to tailor haka performances for government agencies, events, and even cultural awareness workshops. “People still don’t appreciate our culture or our language, but the tide is starting to turn. Kapa haka is one of the vehicles that has attracted people to learn the language,” says Annette.

If all this sounds a bit exhausting — that’s because it is. As leaders in their community, Tāpeta and Annette tend to stretch themselves thin between Te Waka Huia, their business, and helping with events and initiatives that serve Māori. “Being leaders in kapa haka means that we have a further reach — our people trust us and listen to us. We have a responsibility to use our platform in a responsible way,” says Annette.

Today, Tāpeta is doing just that. Inspired by his father’s work in prisons, he recently started teaching kapa haka at youth justice facilities throughout Auckland. In June, he and his brother spent a month traveling to prisons to tutor and judge a 12-week kapa haka contest. Te Waka Huia is not only a competitive kapa haka team — over the years, it has been cherry-picked to perform on the global stage. In 2017, the team, accompanied by Māori singer-songwriter Maisey Rika, was invited to perform at a water theme park at Universal Studios in Florida. However, the visit didn’t end at the show. Te Waka Huia performers also opened a dialogue concerning how to adopt elements of an indigenous culture respectfully. “We went over there to open the theme park,” says Annette. “And it ended up becoming a lesson on cultural appropriation.”

“We were told it wouldn’t work — that you can’t put gangs together. But crime and violence dropped 82 per cent in one prison in those 12 weeks. Gang members were standing side by side, officers and inmates standing in the ranks together. That’s the power of haka,” he says.

More stories you might like:
Auckland comedy newcomer Sacha Jones says the older you are the funnier you get

Now, with plans to relocate to the East Coast, Tāpeta and Annette are heading back to where their journey started. But their story is far from finished. When they’re not “in the trenches” with Te Waka Huia, they are leading an iwi-run social housing initiative in their respective hometowns, Waihīrere and Whāngārā. This next chapter has little to do with kapa haka; it has everything to do with manaaki.

For manaaki, perhaps, is the final tier of the Wehi legacy. “We have spent more than 60 combined years using kapa hapa to help people in Auckland. Home is calling. It’s time to help our own,” she says.

Te Waka Huia is one of 49 teams around the country who will gather for the pinnacle event for Māori performing arts, Te Matatini. The 2022 festival, held at Auckland’s Eden Park, was to mark the 50th year of the biennial event. (Since the time of writing, the festival has been postponed to February 2023.)

Annette, who sits on the Te Matatini board, says the festival is important for Māori and non-Māori alike. “You’ll find exactly what is on the mind of Māori at Te Matatini. Kapa haka takes the most pressing, important messages for Māoridom to a public platform.”