Jim reflects on his accident-prone past as his two daughters head to the operating theatre in the same week.

“Dad,” the youngest began, “where are you going after work?”

After my morning radio show, I was heading to lunch with the Burns Support Group, an organisation that helps those who have suffered serious burns.

I’m their ambassador. As an eight-month-old toddler, racing around the kitchen in a walker I had burnt myself when I toppled a jug of boiling water over myself.

“What do you have to do?” she asked. When I admitted I was basically there to tell my story, she offered two bits of advice.

Sadly for the youngest, she has inherited my trait for being accident-prone and so she formed a big part of the tale I told at the lunch.

She was due back in the hospital for a tidy up of scarring left from surgery to repair her Achilles just over a year earlier. Her older sister was heading to the hospital two days after that to tighten a shoulder that dislocated twice over summer.

I’m fairly sure the school raised a skeptical eyebrow when I emailed them this information. They perhaps suspected that the Kayes were off to Fiji.

We’re not and this is just the result of bad genes – all mine. Dodgy shoulders are rife on my side of the family. I’ve had one done, two sisters have had a similar operation and my brother should’ve had his done.

And the accident-prone gene is purely mine. I’d broken my leg at four, scalped myself at five, run through a glass ranch slider at six and had about 300 stitches by the time I was eight.

Some of those were from surgery to help ease the pressure caused by scarring across my chest to my right arm. Imagine wearing a tee-shirt that’s too tight – that’s what the surgeon was fixing with his series of Z incisions.

The first of the two surgeries occurred when I was seven and Mum was told I would have my arm out horizontal in a cast for four weeks. 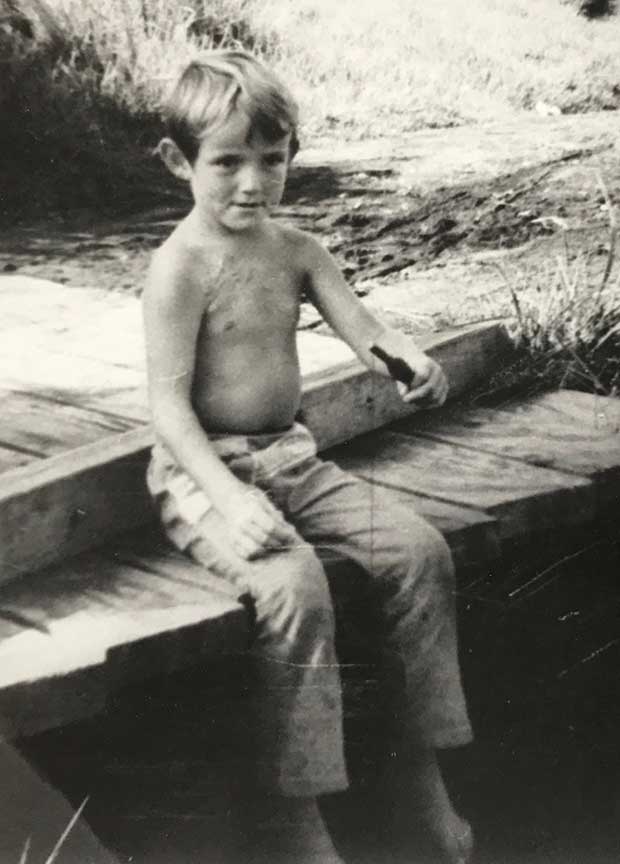 Five-year-old Jim after his accident with a jug of boiling water.

She could only imagine the nightmare a hyperactive boy with his arm in a horizontal cast was going to cause in a busy household.

I reckon I was far from impressed too.

Thankfully, a visiting surgeon from Pakistan performed the operation in an updated way and I was in a sling instead of the cast.

But I was still an accident waiting to happen as I explained at the lunch to my audience of burns survivors. There are many experiences we all have that put our lives into perspective. Burns survivors top my list.

There is something deeply humbling about being with them. It reminds me how lucky I am that as that toddler my aim was typically off and I missed my face, splashing instead my chest, arms and legs. It could’ve been so much worse.

So too for the eldest who dislocated her shoulder the first time in a swimming pool in a seemingly innocuous way. It almost defies belief however, she literally threw hers out doing butterfly. Last week I saw a cricketer dislocate hers with a celebratory air punch. It can happen easily.

The second time could have been much worse as it came out in the surf at Mount Maunganui during the surf life-saving nationals. As the waves pounded her, the IRB driver thought she was faking and told her to swim in – with one arm.

Ironically, it is that scenario (being in the surf, not being ignored by a bloke who should have been helpful) the surgeon detailed when he explained why she had to get the joint tightened up.

So we have two daughters heading to the operating theatre in the same week.

My audience of burns survivors, many of whom have endured multiple surgeries, chuckled along as I explained what was happening at home.

Then I told them about the shark.

As a lad, I’d explained away the scars from my burns and the surgeon’s scalpel as a shark attack. It was a story I told with great detail, imagination and vigour. My scars have never really bothered me – they’re all I’ve ever known and my mates growing up didn’t give two hoots – but the shark story was still fun to tell.

The trick was to see how long before politeness was put to one side and I called on my BS story.

My wife gave me a week then she said, “Mate, we need to talk about this shark story”.

Seeing past my scars was nothing compared to dealing with my jokes. The youngest will tell you that.