Jim Kayes’ weed eater is broken, and he can’t handle it.

The lawns are cut but I’m far from happy. The grass around the edges is long and there’s nothing I can do about it, at least, nothing that can easily be done.

My weedeater is broken. The starter cord snapped and the bloke at the shop said it wasn’t worth fixing and I should buy a new one. All because the cord broke.

It is 18 years old and it has served me extremely well, but still.

So I took it to a retired chap around the corner from home and he replaced it, but when I got home and gave it a tug, it came out but wouldn’t retract.

He’s having another crack at it but the lawns had to be cut and they look half-done. It’s frustrating, but funny too because it’s a reminder of how we all have different measures for when a job is done properly.

Making the bed in our house is the best example of this.

In a 2014 speech to the University of Texas, US Admiral William H. McRaven spoke of the importance of making the bed. It was, he admitted, a simple task, mundane at best, but as part of his Navy Seal training, he was required to make his bed, every morning, to perfection.

“If you did it right the corners would be square, the covers would be pulled tight, the pillow centred just under the headboard and the extra blanket folded neatly at the foot of the rack.”

While this didn’t fit with his image of a tough warrior, he told his audience the genius in making his bed was that he had accomplished his first task of the day.

It also set the tone for the day, one where hopefully each completed task was followed by another.

And whatever happened during the day, good or bad, he would return later that night to a job that had been done well, done right. 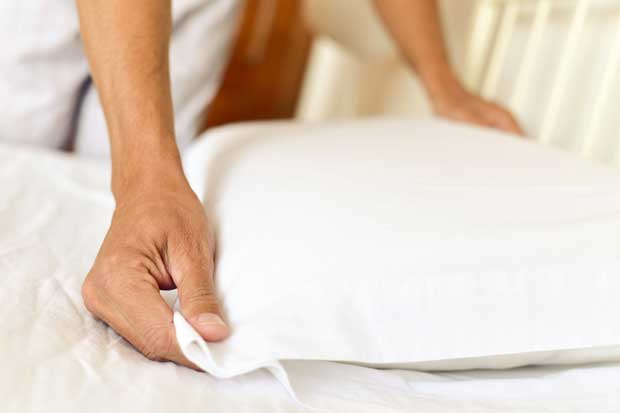 My wife isn’t a Navy Seal but her insistence on a bed made right is borderline ferocious and has been adopted by the youngest daughter.
The other day I enlisted her help to make the bed while her Mum was out for a run.

I was whipping through it when she said, in a voice disturbingly similar to her mother’s, that I was appalling at bed-making.

“Do you want her to come home to a nicely-made bed, or to that?” she asked, disdain dripping from her 12-year-old voice.

I asked what the point of a squared away bed was when I was just going to sleep in it later.

“It’s the presentation that matters,” she said. “You want it to be tidy.”

So I asked how it was that she could get the line of the duvet just right, but couldn’t stack a dishwasher.

How did she think dishes would be cleaned when they had been tossed in upside down?

She giggled and admitted she and her big sister knew that regardless of how they placed the dishes I was going to re-stack it, so they just tossed them in.

Sadly, it’s the same with the clothesline. I’ve been known to re-peg their disastrous efforts so line space and peg usage is maximised.
I cringed writing that, but it’s true.

It’s made me realise that the strength of a family when it comes to domestic chores is our personal OCD.

My wife can sit on the couch, surrounded by washing that I have to fold before I can relax and watch TV.

She will drive her car knee-deep in the detritus of a busy life while my ute is kept in showroom condition.

Yet she can be annoyingly fastidious in others area of domesticity. This is especially the case if we are running late and there’s still a present to be wrapped or a platter prepared.

The youngest follows neatly in these footsteps, but only when it suits her.

Like her sister, enthusiasm can quickly wilt. The other day the eldest offered to water blast the driveway. I set her up and showed her that long, slow sweeps were the most effective way.

She did a small bit, but inevitably I took over and sprayed, while she walked away.