Jim Kayes’ Blog: In the swing of things


Jim Kayes is egged on by a 12-year-old and gives a terrifying ride in Rotorua a swing.

We were about a third of the way to the top when she apologised.
“Why did I say I wanted to do this? I’m so sorry,” the youngest daughter said.
Well it was a bit late to be sorry! We were strapped into a chair being winched 50m to the top of a swing at the Skyline park in Rotorua and there was no backing out now.
Not content with the luge and a go on the zipline, my daughter and her cousin had decided they’d go on the swing too.
But when we got there she challenged me to come as well.
“Come on Dad. If a 12 year-old can do it surely you’re not too scared?”

Well I was! But with a small group of other would-be swingers standing around what was I meant to say?
Next thing I know I’m going with my daughter and her cousin has talked her Dad into going too after us.
He’s Samoan and it’s safe to say he looked as pale as me when he was being winched to the top too! At least we were both equally pathetic.
The Skyline swing is a mix of terror and pure joy. The advertising blurb says the swing reaches 150km/h but the worst bit by a long stretch is the slow trip to the top with just a seat belt to keep you in place. 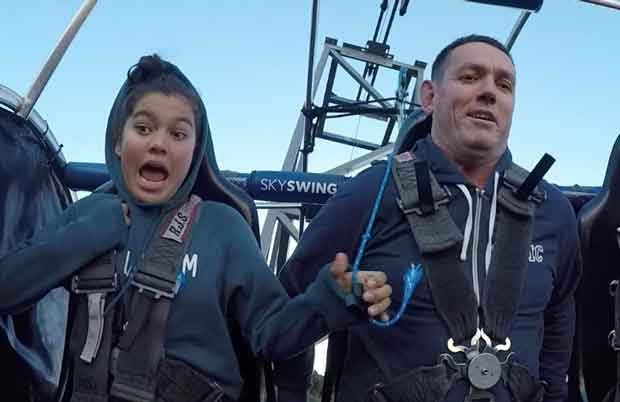 It’s not the first time the kids have taken me beyond my comfort zone and I’m sure it won’t be the last.
A few years ago we were holidaying in Whitianga and made a day trip to the gorgeous Opito Bay. Around the point are cliffs off which you can, if you like, jump into the water.
Of course my two went straight over and in, and then asked why I was taking so long. With a small crowd there it was again difficult to say what I really felt!
So instead I jumped.

It used to be that I was the first one over the cliff. I was a reckless lad who gave little thought to consequences – much to Mum’s dismay.
But age has given me perspective, a sense of caution and – it’s sad to say – knowledge that I can’t do all the things I used to.

Gravity helped me a lot at the Skyline when it came to the luge. My daughters and their cousins would get away before me but they were too light to stay in front.
To their disgust I would barrell past at about the halfway mark, then cheat as much as possible to stay ahead in a dash to glory that seems ridiculous in hindsight but was invigorating at the time.

A few years ago we had a holiday on the Gold Coast and spent several days at the theme parks. The water ones were our favourites and again, being heavier often worked in my favour when it came to racing the kids on slides.
Height helped too at Movie World but not in a way the youngest wanted.
We had gone on the disarmingly named Scoobie Doo which sounds gentle but scared the living daylights out of me; been thrown skywards in another ride and flipped upside down at least one other.

The ride both girls desperately wanted to do was called Green Lantern and from a quick look seemed to consist of being upside down most of the time.
I wasn’t keen but had agreed to do everything the girls did while my wife, who was nursing a snapped Achilles, sat beside the pool back at the hotel.

As the queue inched past a height guide it became apparent the youngest was too short.
When we got to the attendant she’d popped her cap higher on her head, hoping it wouldn’t be noticed.
The ruse failed and I did a silent fist pump behind her. 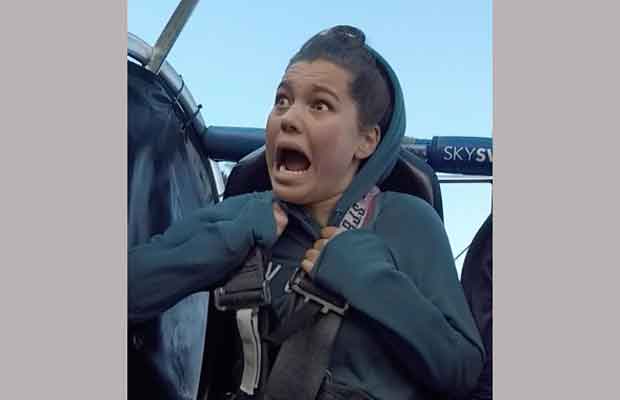 Our swing ride in Rotorua was actually pretty cool and, after the terrifying winch to the top, exhilarating.
It’s one of those things you’re pleased to have done – after you’ve done it and the terror has subsided.
So it was for the youngest.
As the seat swung slower and slower, she looked at me with a big smile, her cheeks glowing in the cool air. “Do you want to do it again,” she asked.
This time I had no hesitation. No.