Kiwis in the kitchen


When nocturnal noises interrupt Polly and James’ sleep, it could mean unexpected visitors of anything from iconic wildlife to decidedly dubious characters.

Usually the things that go bump in our night can be neatly sorted into two categories: the indoor whack of three-year-old Vita – a sleep crawler/kicker who routinely collides with walls and prostrate forms on the mezzanine floor of our co-sleeping set-up – or the outside thwack of prowling possums meeting their end in a Timms Trap. So when we recently woke to the sound of a scuffling thump on our doorstep, James blearily headed out with his air rifle in order to send a possum to its maker. He returned moments later with an urgent whisper that catapulted me from the bed. “It’s a kiwi!” 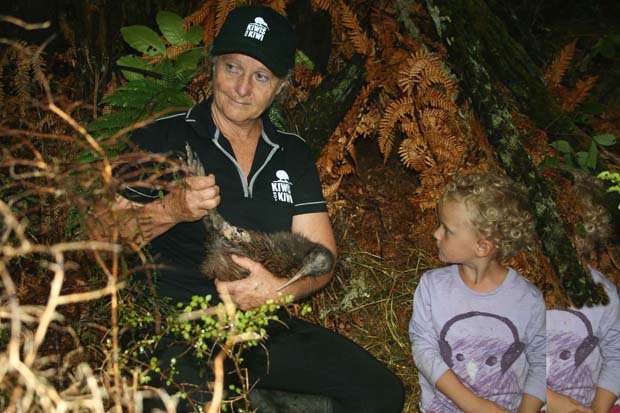 She had wandered into our soon-to-be completed kitchen and been cornered by our dog Pax, who stood stupidly wagging his tail and sort-of grinning from a face criss-crossed with bloody claw marks. She was surprisingly big, with a whiskered beak and strong legs that glowed palely under torchlight. There were spots of blood on the concrete and I felt sickened and responsible, as if something sacred had been desecrated under my care. We’d been meaning to take Pax to kiwi-aversion training for some time but had always been busy on the days it was held.
The sleepy-voiced vet I consulted at 2am instructed us to wrap up the bird and bring her in the next morning, where her punctured leg was stitched before she was collected by DOC. While she was nursed through a course of antibiotics, James and I marched Pax off for a lesson in respect for our national icon.

Fitted with an electric collar, he was encouraged to run through a patch of bush where stuffed kiwi, kiwi feathers and scat had been laid. Nose down, tail up, he had scampered happily over to the stuffed bird for a sniff when he received an electric shock so vigorous he rose off the ground and hung in mid-air, paddling frantically with all paws like a cartoon character while he howled. Merciless Vita, delighted with the performance, eagerly called for an encore, but it was deemed unnecessary as our terrified hound bolted for the car.
A couple of weeks later, amid assurances from James and me that Pax was now confined to a kennel at night, the recovered kiwi came home to a custom-built burrow in the bush. We like to think we can hear her amongst the evening chorus as whistling males and scratchy-voiced females sing to one another from the surrounding forest.

When a second nocturnal visitor came calling, Pax again summoned us from sleep as his canine version of a burglar alarm rang into the night. We sat up, frowning at the hum of an approaching engine chugging its way up our drive. “I’ll go,” James volunteered, as the mystery car revved and an unfamiliar male voice yelled at the dog. During the excessively long wait that followed, I lay listening to car doors slamming and voices rising and falling and wondered, for the first time ever, if we might have been smart to fit some sort of lock on our door.

Eventually James returned amid the departing crunch of car wheels on gravel to report the midnight visitors were lost, out of gas and possibly a little suspect. He’d surmised the last after helping them fill up their rather grand, late-model 4WD and observing the screwdriver rather than keys poking out of the ignition. Speculating on just how misplaced one must be in order to arrive randomly up our forest road in the midnight hours, we fell back to sleep listening as the vehicle slowly retreated into silence. Later, we learned that the police had spent the next morning patrolling neighbouring valleys, but we never did find out why and I’m back to rather liking that we still have no lock for our door.

In the next post, Polly gleefully kisses her laundry buckets goodbye but not everybody’s happy with progress.