Kiwis need to be more adventurous with their campside cooking, say the authors of The Camping Cookbook PLUS three gourmet camping recipes 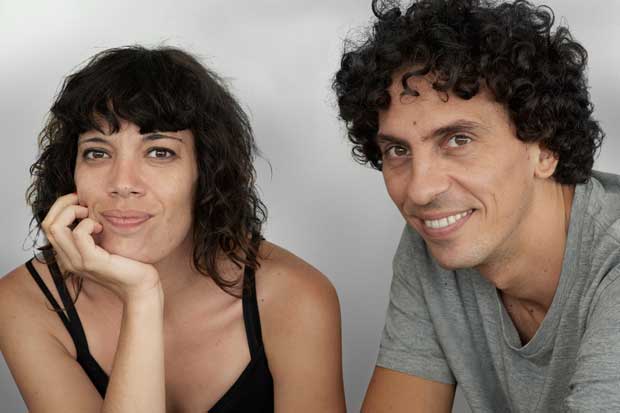 Campside cooking shouldn’t be limited to scroggin and dehydrated meals. So say the authors of a new illustrated cookbook that encourages trampers to try more adventurous fireside recipes such as fondue and sangria.

How do you combine a passion for camping with a love of graphic design? You create a cookbook of course. Well, that’s if you have a background like Sara Mutande and Andrea Lo Vetere. Sara’s family hails from Extremadura in Spain – an undiscovered region of mountains and medieval cities known for good food.

Her family home, El Jardin Del Convento, was transformed into a boutique rural “casa” with a garden based on the original 19th-century design. Here, Sara ran the restaurant, using fresh local produce and skills passed down through generations rather than studied at a formal institute.

Andrea was born in Sicily in Italy, and so an appreciation of simple but tasty food runs in the blood. “I remember my mother bringing me home from school, and before she even took off her coat, she’d be fussing around with the pots on the stove,” he says. Within half an hour, there was an amazing lunch on the table. 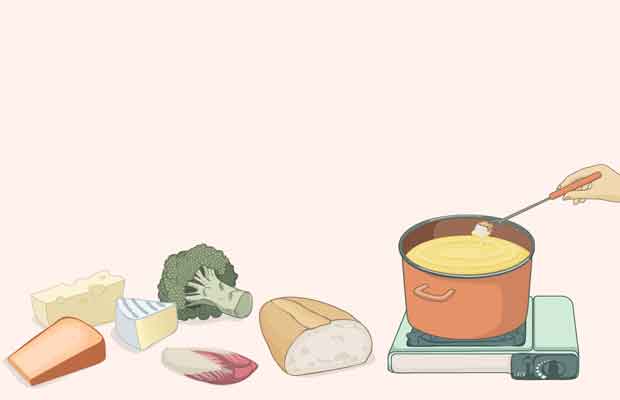 Illustrations from The Camping Cookbook.

When the duo, who met in the bustling city of Barcelona, came to New Zealand, they fell in love with the lifestyle. “Barcelona was chaotic and amazing but, here, the contact with nature was something new for us,” says Andrea. “It just catches you.”

That was not the only thing to surprise them. When their friend, an expert mountaineer, pulled out pouches of dehydrated meals to eat as they accompanied him on the Routeburn Track, they were also a little taken aback. The ember of an idea for The Camping Cookbook began to smoulder.

Visitors who happened by their Grey Lynn flat might well have wondered why the pair had set up a little gas stove and mock campsite kitchen in the corner of their bedroom. All in the name of research.

While Sara and Andrea field-tested most of the 30 recipes for the book in the wilderness, winter drove them indoors. The process was not full time since they were both working other jobs: Sara as a cook at the former Bonita tapas bar on Ponsonby Road, and Andrea, who has an MBA in design, as a graphic designer for an advertising agency. 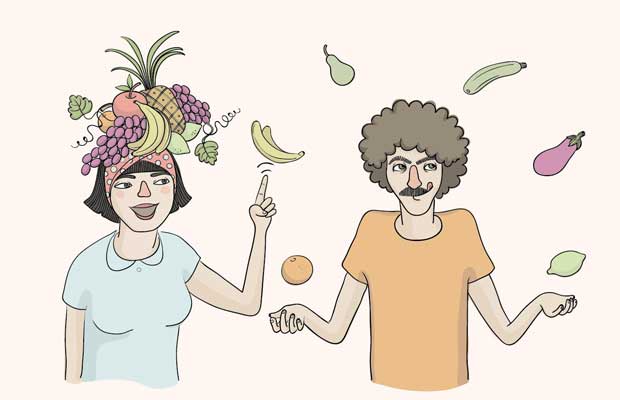 An illustration of the authors.

Slowly but surely, they developed the recipes that drew on their culinary history but were adapted for life on the open trail.

Camping can be grand – “I’ve seen people bring their Christmas trees!” – but for the book, Andrea and Sara took a minimal pathway, crafting meals that could be prepared using just one pot or a frying pan.

“We devised tricks, so you needed even less gear,” says Andrea. His favourite kitchen “tool” is the zip-top plastic bag. They weigh nothing and have myriad uses: to transport pre-mixes such as that for home-made blueberry cornmeal pancakes or for bread-crumbing (just pop the fresh-caught fish in the bag) and marinating. They also minimize mess if you need to mash up food. “And they can be filled with water and frozen so you can take them along as refrigeration in a chilly bin,” he says. 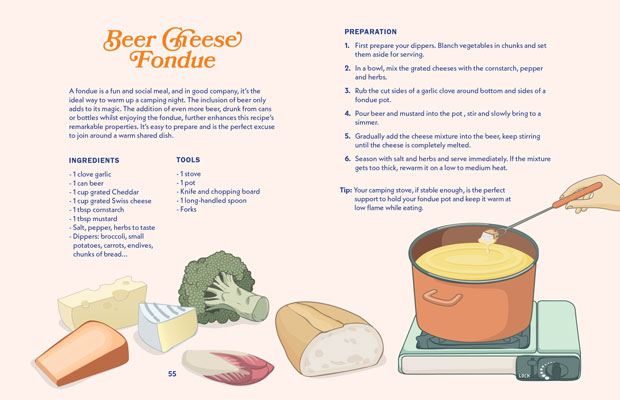 There are obvious influences from the Mediterranean in The Camping Cookbook – recipes such as Veggie Paella, Pan Tomaca Bread and Mushroom Risotto – but one of Andrea’s most-exciting inclusions is Soffritto, preserved in salt.

“Soffritto is the base for so many dishes in Italy,” he enthuses. “It’s a mix of finely cut aromatic vegetables such as onion, celery, carrot and garlic, pan-fried in olive oil, that makes a good base for pasta dishes.” To make it without lugging fresh produce in a backpack up a mountainside, he devised a method whereby the raw veggies are pre-cut into small pieces then preserved between layers of salt and stored in a glass jar that is boiled to create a vacuum. The veggies will last a few days out of a fridge – enough for a multi-day hike. See the Sangria recipe below.

To ensure that the joy of living in the outdoors doesn’t come at the expense of the joy of food, the authors have added a few recipes campers might not expect. Included in The Camping Cookbook are a recipe for sangria and a couple of easy-make desserts. One, Chocolate Ganache, is made with avocado. “A chocolatier friend in Spain gave us that tip; the avocado gives the ganache a lovely creamy texture without the need for fresh cream.”

Although the book is packed with practical advice on equipment to take (and what to discard), components to make at home before you set out, and storage information, its design deserves a notable mention. A blue cover and orange heading takes its cue from a Kiwi classic: the Edmonds Cookery Book. The design is reminiscent of a classic 1970s cookbook in its typography, layout and the compact size. 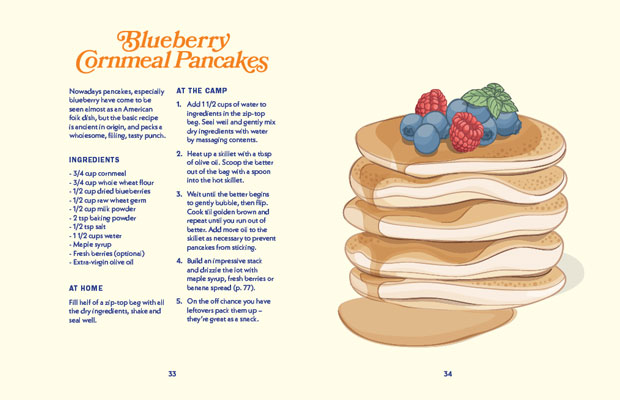 Inside, Sara has illustrated the book with clear, simple visuals that are a modern take on that vintage aesthetic. (Oh, did we mention there’s a fondue recipe that harks back to this era?) As Andrea says, “Its style fits well with those books that your mum used to cook from. What is more credible than that?”

RECIPE: BEER CHEESE FONDUE
A fondue is a fun and social meal, and in good company, it’s the ideal way to warm up a camping night. The inclusion of beer only adds to its magic. The addition of even more beer, drunk from cans or bottles whilst enjoying the fondue further enhances this recipe’s remarkable properties. It’s easy to prepare and is the perfect excuse to join around a warm shared dish.

PREPARATION
1. First prepare your dippers. Blanch vegetables in chunks and set them aside for serving.
2. In a bowl, mix the grated cheeses with the cornstarch, pepper and herbs.
3. Rub the cut sides of a garlic clove around bottom and sides of a fondue pot.
4. Pour beer and mustard into the pot , stir and slowly bring to a simmer.
5. Gradually add the cheese mixture into the beer, keep stirring until the cheese is completely melted.
6. Season with salt and herbs and serve immediately. If the mixture gets too thick, rewarm it on a low to medium heat.

Tip: Your camping stove, if stable enough, is the perfect support to hold your fondue pot and keep it warm at low flame while eating.

RECIPE: SANGRIA
There are many notions on how to best make Sangria, but most of them are feeble approximations of the real thing. Authentic Spanish Sangria is a subtly balanced melange of fruit flavours and wine, requiring time to infuse. So you need to plan your sangria at least 12 hours in advance, and be sure to have plenty of ice when you serve it. Yes, it requires a little effort but you will be completely rewarded if you follow this recipe to the letter.

PREPARATION
1. Pour the wine into a jar or a bowl. Squeeze the juice of two of the oranges into the wine, then throw in the flesh and skin. Add the sugar and the crushed cinnamon sticks, and leave the mixture infusing at a cool temperature for at least 12 hours (if you have a fridge you can prepare it the night before, to serve your sangria the night after).
2. One hour before serving, cut the rest of the lemons and oranges into slices or wedges, and add them to the infused wine. Leave resting for 1 more hour then add a lot of ice.

Tip:
Remove any fruit pips from the infusion, as they might release a bitter flavour.

RECIPE: BLUEBERRY CORNMEAL PANCAKES
Nowadays pancakes, especially blueberry have come to be seen almost as an American folk dish, but the basic recipe is ancient in origin, and packs a wholesome, filling, tasty punch.

AT HOME
Fill half of a zip-top bag with all the dry ingredients, shake and seal well.

AT THE CAMP
1. Add 1 – 1/2 cups of water to ingredients in the zip-top bag. Seal well and gently mix dry ingredients with water by massaging contents.
2. Heat up a skillet with a tbsp of olive oil. Scoop the batter out of the bag with a spoon into the hot skillet.
3. Wait until the batter begins to gently bubble, then flip. Cook till golden brown and repeat until you run out of batter. Add more oil to the skillet as necessary to prevent pancakes from sticking.
4. Build an impressive stack and drizzle the lot with maple syrup, fresh berries or banana spread.

5. In the remote chance you have leftovers pack them up – they’re a great as a snack. 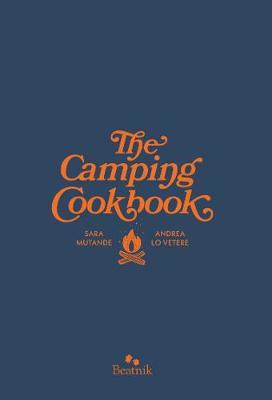