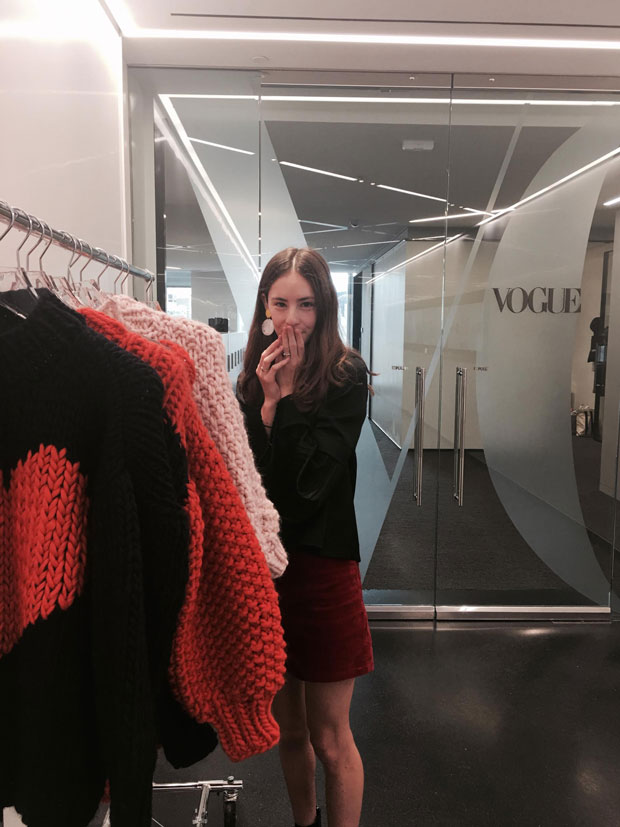 Nicole before her meeting with Vogue.

Nicole Leybourne’s designer jumpers are so sought after, she’s had to hire a team of knitters across the country.

Just months ago, a girl from New Zealand found herself on the 25th floor of Vogue’s offices, “a sweaty mess” in her handmade chunky knit jumper. She was clutching a rack of woolly garments and fanning herself in New York’s heat, when Anna Wintour stepped out of a lift, and Grace Coddington stepped in.

Nicole Leybourne had just lugged two suitcases stuffed with 20 of her handmade sweaters through the Conde Nast basement and security – home to the holy grail of fashion publishing, Vogue magazine.

“I was completely flustered,” Nicole says, but editors loved her New Zealand-made knits and plan to feature them in an upcoming shoot. 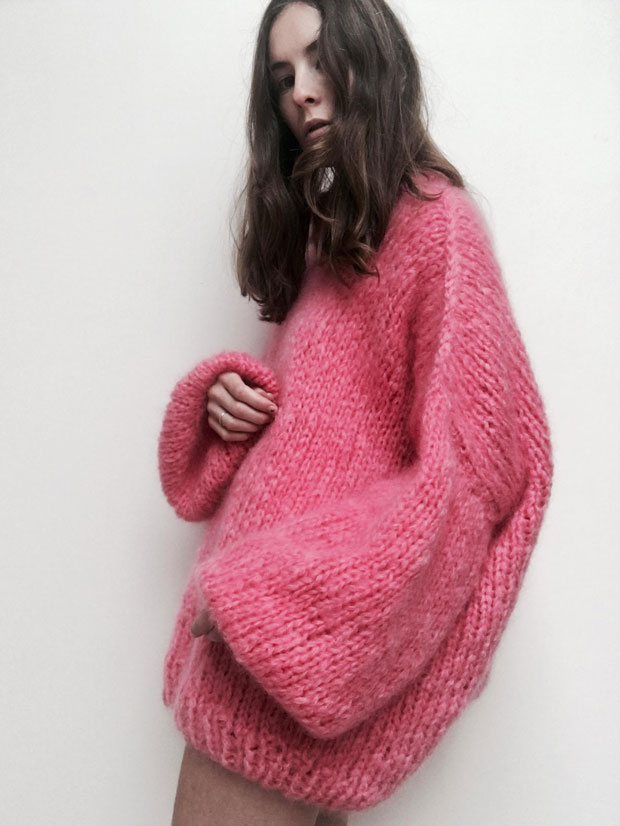 Nicole modelling ‘The Bubblegum’, which retails for more than $700.

Auckland-based Nicole is The Knitter, a 25-year-old whose oversized wool sweaters in saturated colours have developed a cult following. These aren’t ordinary knits. Think haute couture, statement jumpers, which retail for $769NZD. Her creations are so popular, she has a two-month backlog of work.

Nicole herself is the opposite of her loud sweaters. She is small and soft spoken, dwarfed by the bulbous ‘Zip Zap’ she wears.

She devoured YouTube knitting tutorials after falling in love with a yellow fluffy jumper. She scouted the knit at a boutique while living in Perth. “I thought, ‘Oh my gosh, I’d love to make something like this myself’.” She was ambitious, too, her first attempt at knitting was a black jumper – forget scarves. Unwearable, she admits, its parts never sewn together, but nonetheless a pivotal point in what was to become a business with international demand.

Perth was Nicole’s base between trips to Asia where she modelled, on intermittent contracts, for four years. She recalls days sweating in a tiny Tokyo shoebox apartment with her roommates and living off homemade banana ice cream. She no longer models, and it’s part of her life she prefers to keep private. “You’re not treated like a human being, you’re just a product. It can feel so unambitious.” 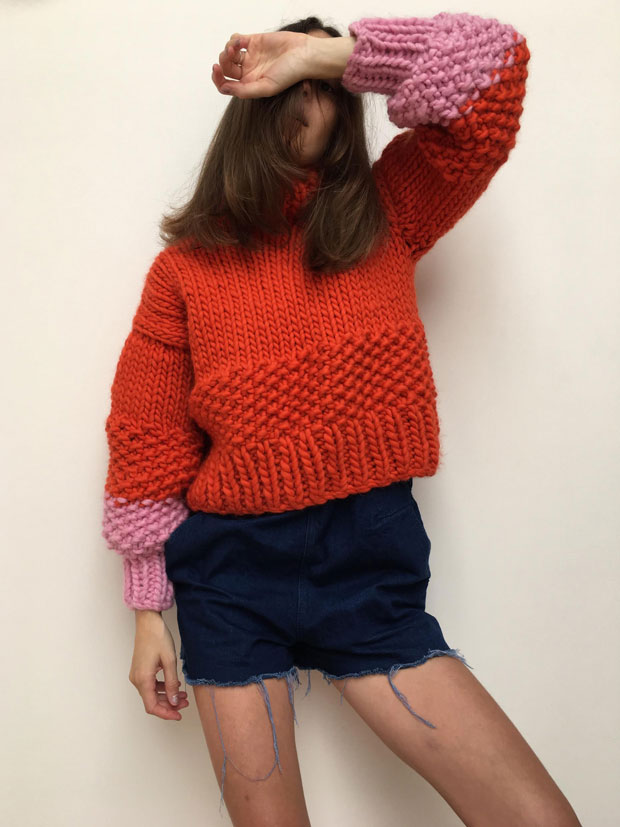 A career in knitting certainly wasn’t foreshadowed at school. At 12, Nicole swindled her way out of a school scarf project by asking her grandma to knit it for her. “I guess that was my first little taste of knitting, even though I didn’t knit it.” A few years down the track, at Westlake Girls High School, she was told her cushion-sewing wasn’t up to scratch, and her teacher advised her not to take textiles again.

Her natural medicine studies in Ellerslie are on hold, as of March this year as Nicole is “flooded” with orders for jumpers. Although she won’t reveal the exact number she has sold, she says she needs a team of 100 knitters to keep up with orders coming from the United States, Europe and China since the 2015 launch of her site The Knitter.

“I kind of always wanted this, but this year it took off and everything kind of happened. I feel very lucky.” It takes approximately three 8-hour days to knit a jumper, perhaps a bit longer, as she sometimes gets distracted – often by another cup of tea, a chat, or a helping of sweet slice.

Knitting is laid out on the kitchen table; Nicole prefers to have the weight of the garment resting on a surface, yarn is heavy stuff. She’ll knit with her laptop open, listening to Lorde or a Modern Love podcast.

Her jumper patterns are homemade. She’s yet to learn to read knitting patterns, currently abbreviations like k2 and p2 are as meaningless as a foreign language.

Demand is growing and Nicole has hired 20 knitters across New Zealand, one as far south as Wanaka. Knits are stitched together on laps in squishy armchairs, spread across coffee tables and even in front of the wrestling on telly -in one case.

Her knitters have become close friends. She’ll often call in to see Denise, 80, in Onehunga to drop off wool, sometimes a bottle of milk. What do a 25-year-old and an 80-year-old have in common? “We talk about our skin conditions.” Denise started knitting when she was five, Nicole says. She grew up near a farm, and would pick sheep’s wool off her fence and knit with nails.

Success does turn the rumour mill. Nicole felt particularly hurt by a knitting shop owner, who accused her of exploiting old ladies. “My friend went in and the woman said, ‘You’re not going to knit things and sell them like this other girl in Auckland?’” Nicole was shocked. The worst part was that she’d met the shop owner just a month previously and there were no complaints made then. 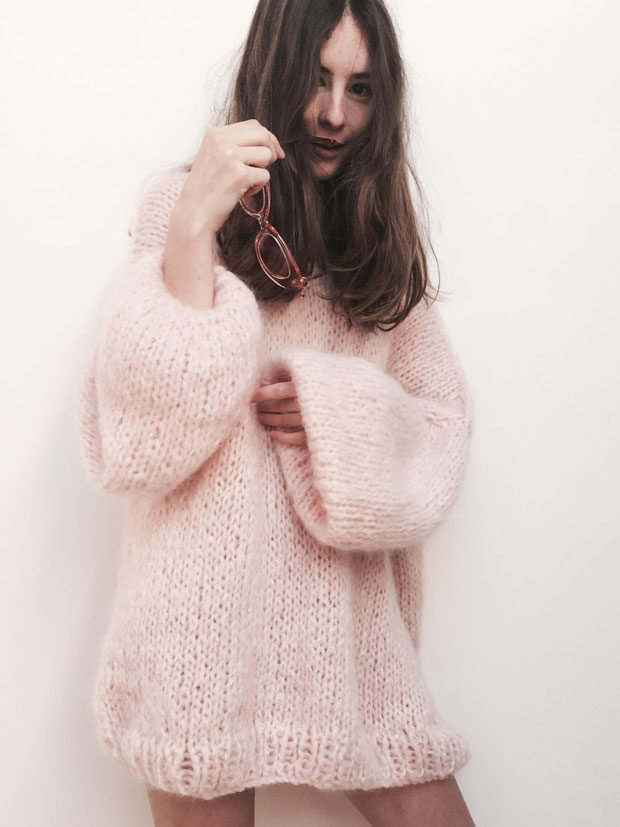 “I don’t want to have that reputation as exploiting knitters, because it’s not true, nor is it very nice and I would never do that.”

An attraction to wool appears to run in the blood. Nicole’s grandfather John Stubbs was one of the first wool agents in New Zealand, calling on sheep farmers from Dannevirke to Ruatoria. The wool trade was buoyant when he left school and was a profitable career, he says.

John dealt with the raw product, sorting the wool into categories before it was sold. “There were all different types used for different products, the fine wool was for warm jerseys and coarse wool for a carpet.”

It’s a coincidence, of course, he says, that his granddaughter is involved in the industry. “But she’s on the world stage now, isn’t she.”

Nicole sources her materials from sustainable companies – mohair comes from South Africa and chunky sheep’s wool from Peru. Traceability of her materials is something she’s working on. She’d like to use New Zealand wool, but says the merino market has been hard to crack. She feels it may be because her business is still small.

“I was surprised it was so hard. It’s so silly how we live in the land of sheep and I can’t even use New Zealand wool in my designs, but it is what it is.”

Ironically, Nicole has a strong distaste for the fashion industry. “Unfortunately I fall within it, but I wish I didn’t have to.” She isn’t a fan of hierarchies or snobbery. At the end of the day we’re all the same, she says, “just take off everyone’s clothes and stand nude”.

Recently, Nicole packed up and moved to an old beach house in Bethell’s Beach. Thankfully, cardboard boxes don’t get in the way of her profession. She can sit outside under the trees. All she needs is a seat, a ball of wool, and a pair of circular knitting needles.