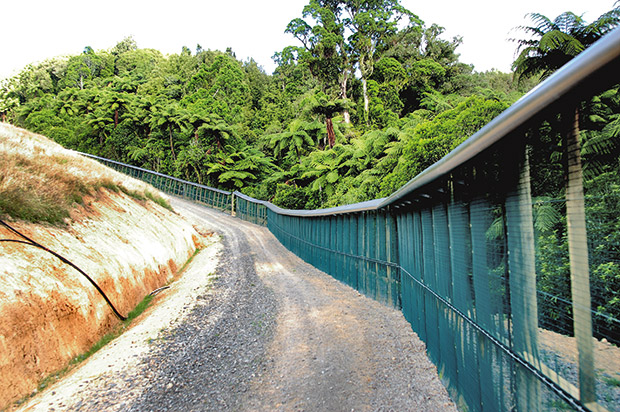 An ancient forest atop a Waikato mountain is home to the world’s largest mainland pest-free sanctuary.

It’s easy to imagine that this three-metre-high fence could have once halted a Tyrannosaurus rex, but peril at Maungatautari comes in much smaller, furrier forms.

Sanctuary Mountain Maungatautari, a 3400-hectare wildlife haven near Cambridge, is surrounded by the longest pest-proof fence in the world. Forty-seven kilometres of steel dip and rise around the forest-topped maunga (mountain) and, beneath the surface, a mesh skirt spreads a further 30 centimetres under a thick layer of gravel. The fence and skirt keep vulnerable species such as the western north island brown kiwi, kōkako and saddlebacks safe within.

Maungatautari, governed by a charitable trust, has been free of introduced predators (except for a few surviving mice) since 2006. Kererū gobble up tawa fruit, unknowingly aiding in the regeneration of the thick canopy above. Meanwhile, fantails flit behind flocks of whitehead and kiwi chicks burrow below century-old trees.

But peace within the sanctuary doesn’t mean the Jurassic Park-like fence isn’t foolproof. “It wouldn’t take long for the sanctuary to return to normal if we walked away, even with a fence around it,” says kiwi ranger Craig Montgomerie.

The fence’s tight mesh will keep a baby mouse out, but a branch caught in a floodgate or a fallen frond draped across the fence is an open invitation for hungry rodents. A wily stoat would be detrimental to vulnerable chicks and eggs within the sanctuary. That’s why any breach will see a ranger or staff member at the scene within 90 minutes. Inside the sanctuary, more than 400 active volunteers help monitor the extensive network of tracking lines, which are equipped with baiting systems, trail cameras and traps.

Tuatara and takahē have been introduced into the wetland enclosure, which was gifted by a neighbouring family in 2005. A partnership with national charity Kiwis for Kiwi will see the release of 500 kiwi chicks over five years into the forest. The bush-clad mountain offers a rare peek into the area’s pre-human past and, hopefully, a glimpse of a predator-free future. Wildlife can be spotted from Maungatautari’s extensive trails via guided tours, self-guided walks and kiwi-releasing ceremonies. Tali will never forget the moment when a group of local children saw their first kiwi. “The kids didn’t move when Craig took out the kiwi, and there was a chorus of quiet gasps.”

For Tali, the sanctuary is as much of a refuge for native species as it is an educational tool. “People have to connect with something to care about it. Then hopefully they will do something to protect it.”

Maungatautari was a public reserve until a neighbouring farmer, David Wallace, built a prototype pest-proof fence around his property in 1999. It was a blueprint for the mountain; David and his wife used their property to convince landowners, locals and iwi that a predator-free maunga was indeed possible.

Repost: @millyalice. Seeing baby takahē was the late Christmas present I didn't even know I needed! This family of 5 at Sanctuary Mountain make up kore than 1% of the world's takahē, who are only found in New Zealand. Such a privilege to experience!

The formation of the Maungatautari Ecological Island Trust helped fund the fence, which also required permission from dozens of bordering landowners. Once it was completed, three helicopters dropped poisonous cereal bait to eradicate mammalian predators in the vicinity.

Sanctuary Mountain Maungatautari now offers guided tours through the bush or wetlands, while keen walkers can roam without a guide for a small entry fee. All proceeds go back to the land. Learn more at sanctuarymountain.co.nz