Lisa Scott gets made up for iD Dunedin Fashion Week

I did modelling as a teenager. My mother, a Miss New Zealand compère (I once had dinner with that year’s winner, who scratched her hair with her fork and called her breasts ‘jellies’), thought it would bolster a lack of self-esteem caused by the large strawberry birthmark in the middle of my forehead. I walked like a duck in heels and it took me ages to master a three-quarter turn. At the end of the course I was presented with a certificate for ‘most improved’. Make of that what you will.
This morning I woke up. My face woke up three hours later. The only thing fashionable about me was that I had all my own teeth – and yet I was off to be made over in the ‘look’ of this year’s Emerging Designer show, the highlight of iD Dunedin Fashion Week. I was talked into trying it out for a laugh by iD’s publicist nonpareil, Amie Richardson, who just might be evil. Leading the proceedings was L’Oréal Paris NZ Director of Makeup, Lisa Matson. 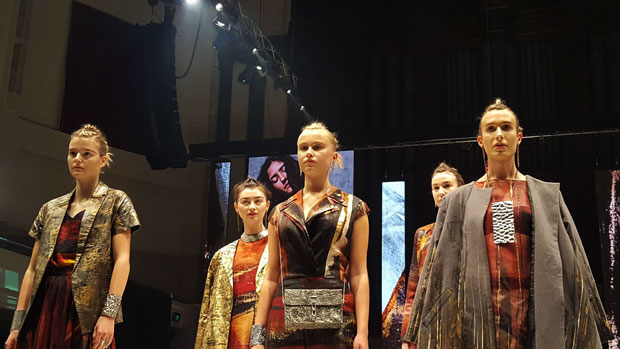 When it comes to makeup, I don’t have a ‘look.’ All I know is, if I don’t draw them on, I have no eyebrows. Makeup artist to the stars, Lisa Matson is a perfectionist. Her features are classic and defined, her skin is dewy. I’m a woman who needs makeup to distinguish her features, to identify where food should go. My skin is more Huey or Louie.
Lisa has been making over friends and family, styling and photographing them, since she was 10 years old. She used to love to watch her Scottish grandmother get ready in the mornings; her appearance was always immaculate. Lisa just did Lorraine Downes’ (who would never scratch her head with a fork) for the cover of her new book Life, Loss, Love – a truly beautiful woman, she says. Celebrities like Quentin Tarantino, Usher and model Kylie Bax have all spent time in her makeup chair. 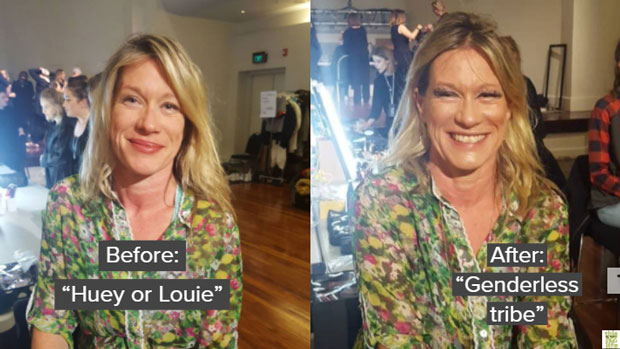 Lisa is fascinated by the power makeup has to transform someone, and she has forged a career that fulfils her creative side and feeds her emotional side, “Making someone else feel beautiful is good for the soul,” she says, touching me with hands that have touched famous people, sprinkling glamour by association, although it was weird to know that Quentin Tarantino and I had only one degree of separation.
Tasked with creating a look especially for the Emerging Designer show, the theme this year was ‘genderless tribe’, the hair and makeup brief stripping back the sexes to a nude look which will have the audience struggling to pick male from female. Yesterday Lisa’s team of 11 worked non-stop all day without a single break on 50 models in and out of 42 collections; the more intricate designs, especially the headpieces by Croatian designer Damir Begovic (who would go on to win) meant touch-ups galore. It’s especially good that she’s here, feet on the ground in Dunedin, rather than directing from afar because the down lights in the Town Hall altered the finished effect slightly so she had to think fast and make last-minute adjustments to correct this. 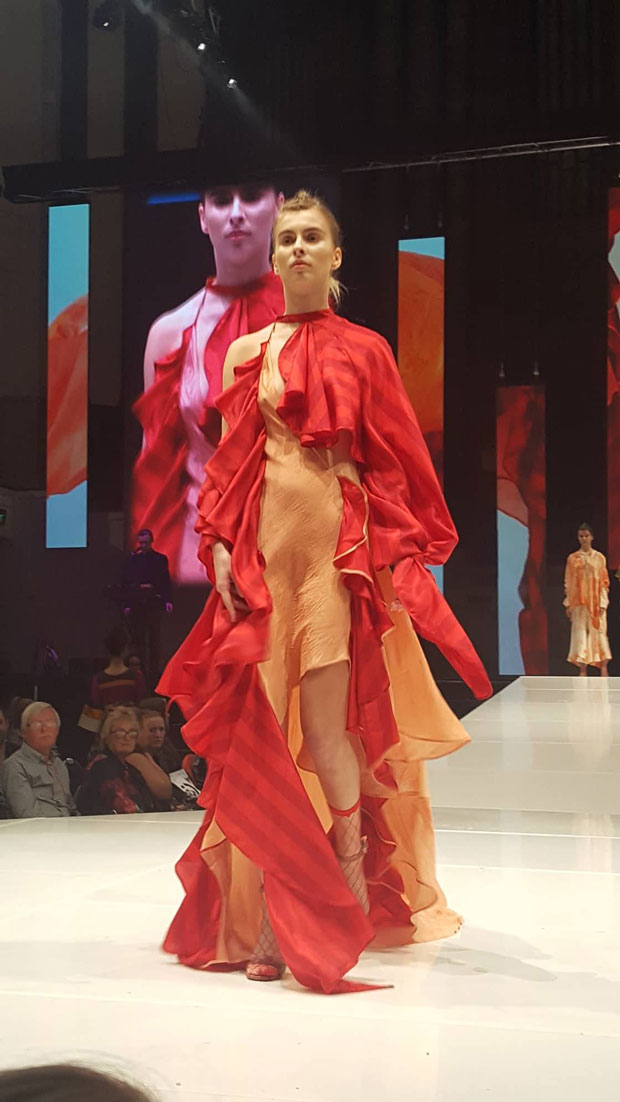 A member of Lisa’s tribe sashays down the runway.

“If you don’t want to look like a prune when you’re older, stay out of the sun and don’t smoke,” said Lisa while working away on my ‘look’. Too late for me: I smoked at Olympic level throughout my twenties and used baby oil to glaze my freckles.Models are quiet in photographs, of course, but I’d expected bedlam backstage – hysteria, high emotion, hands being flapped. Nothing of the kind, all was calm. A beautiful young man tapped away at his phone. The designers sat on the floor next to racks of their work, eating noodles and waiting for ‘go’ time. The only person who seemed nervous was me.

More stories you might like:
Bach from the past: Timeless holiday homes, huts, baches and boats around New Zealand

There’s a lot of invention to creating high-fashion makeup. Lisa used a small black piece of hobby sponge more associated with building model airplanes to apply my eyeshadow. All her tools are bespoke; if it doesn’t exist she’ll make it. Finished, I take a peek in a mirror ringed by light bulbs. I have cheekbones like razor blades, eyes like a fashionable puma, complete with a fake nose piercing. I look incredible, utterly transformed, like someone let me out of the Thunderdome, with smoky eyes and a Gothic rock-chick vibe. I love myself. However, because the makeup is a secret before the models take to the catwalk tonight, I can’t wear it out of the venue. As Lisa moves on to brief her team, the room has grown noisy, there’s an air of industry and excitement. I wipe away the magic but decide to keep the cheekbones. On my way out of the Town Hall, I take the opportunity to sashay down the catwalk and do a three-quarter turn at the end. It was just like riding a bicycle.