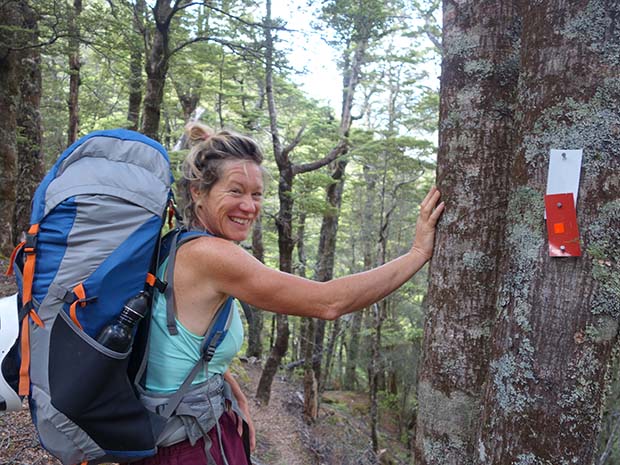 The earth moved for the Feckless Miss Scott on her first three-day tramp high in the Naumann range north of Lake Ohau.

I’ve never been tramping – the closest I’ve got was leaving the house in a questionable skirt as a teenager – now here I was, off to spend three days surviving on what I could carry with me. That, and my common sense.

Tramping is essentially walking all day for all the days it takes to get somewhere, which sounds a lot like a death march, but people come from all over the world to do it, so it must have an upside. My guide to the New Zealand wilderness would be experienced mountaineer Rusty Piton, a Crump-ish figure haunted by rumours of a scandal involving New Zealand’s richest man, drinking one’s own urine and a heli-vac. I imagined three days with Rusty was going to be a bit like Romancing the Stone without the Columbian smugglers. Or with, I’m no snob. The plan was to summit an alpine peak or just not die, which, going by the morbid place names (Disappointment Peak, Tragedy Col), seemed highly likely.

There would be crying, there would be whinging, but there wouldn’t be blisters thanks to Baz and Rich (who arrived 36 years ago for a job trial at Oamaru Sports and Outdoor Ltd and is still waiting to hear if he’s got it).

“He just keeps coming in,” says Baz, who gave me a brand-new pair of boots because I only owned jandals and their curiosity got the better of him. 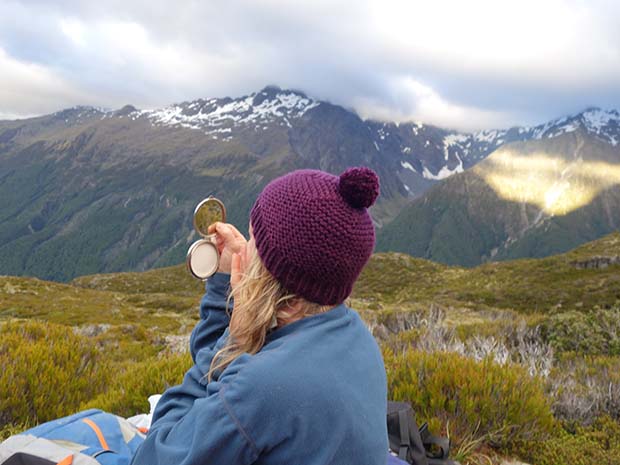 The road to Hopkins valley was so rutted the awful Dutch trance thumping from the stereo cut-out intermittently when we became airborne. Also airborne, were the sandflies, who started biting the minute we parked at Monument Hut beside the Hopkins River.

I had put on extra makeup as a last hurrah to niceness but it melted off during the walk in, which took four hours and felt like eight, carrying a 20kg pack containing an astonishing amount of gear: a down sleeping bag, sleeping mat, portable stove, polar fleece, gloves, hat, waterproof jacket, down vest, sunblock, two pairs of long johns, extra socks, matches, utensils, a compass not that I knew how to read it (if I got lost maybe I could start a fire with it), a kilo of cheese, a stovetop espresso maker … my shoulders were rubbed red from the pack straps. “The bush, like the rodeo, is a great leveller,” said Rusty. I raised an eyebrow, but without makeup they’re invisible. “The mountains don’t care where you come from; you mean nothing to these monoliths.” They certainly looked austere, uncaring, you could almost hear them growling ‘feeble human’ in a voice of gargled gravel. Once I got used to the idea that all my worries were left behind at the truck with my phone, the Newton’s Cradle in my head stopped clicking. It’s so much harder to check out these days, but I had. Plus, I had many rivers to cross, as the song goes. 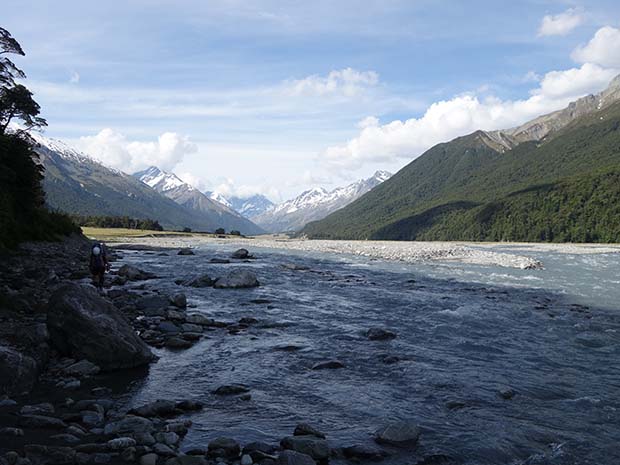 “If you get swept away, roll on your back and point your feet downstream,” said Rusty holding out an arm to link with mine, a gesture strangely Fred Astaire.
“Why?”
“So your pack doesn’t hold you face down in the water, and your feet smash on the rocks instead of your skull.”
At one part the river was too swift and deep to ford, so we had to sidle across the slowly-collapsing shingle cliff above it, my pack constantly threatening to overbalance me. “Why are the sandflies biting so much?” I wailed. “Because you’re a mouth breather,” said Rusty. He kicked toeholds into the crumbling scree as I furiously slapped the bloodsuckers. It was like crossing a moraine made of silver cake decorating balls while carrying grandma on your back and clog dancing.

More stories you might like:
The science behind sleep disorders: Experts weigh in on how to beat insomnia for good 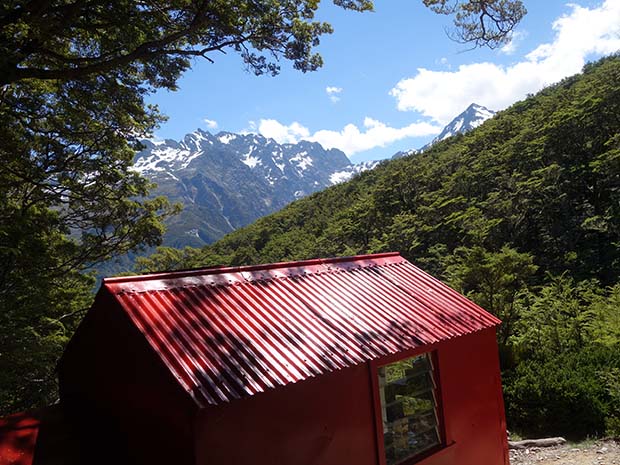 We stopped and rested on a patch of grass under a flowering pohutakawa. I was buggered. “Only 3,000 more seconds,” said Rusty. He meant to reassure but being basically innumerate, this only served to frighten me. And then there it was, Elcho Hut, built in 1938, hugged by beech forest, the ice-cold river out front. A crossword had been abandoned, the last word unfinished: 6 letters, ‘tramp with slow heavy steps.’ Sunset turned the Naumann Range apricot as well the tummies of the Orb webs hanging outside the kitchen window eating sandflies. The river sounded like air conditioning as I fell asleep in a bunk, smelling like armpit.

After initially declaring, “You’ll be so hungry you’ll eat anything (in my book a damning indictment of any recreation), turns out I wouldn’t. Breakfast was porridge without sugar or milk. “I’ll have a poached egg.”
“Right.” said Rusty. “I’ll just go and ruin some bird’s day. It’s going to be a very small egg.” 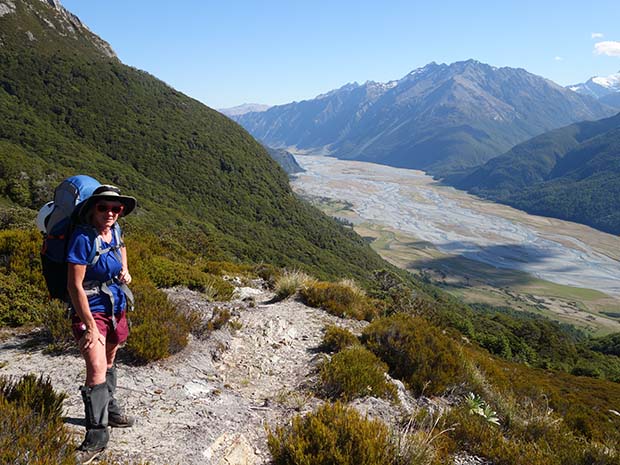 It was 30 degrees and the ‘path’ up the Dasler Pinnacles vertical, rising a thousand metres over the two hours it took to climb, at one point a hand-over-hand haul up a heavy metal chain fixed to the rock wall which I made a meal of moans. After the first hour every step became a slow, hand-on-knee ‘hooft.’ A one-armed woman passed me coming down the mountain as I was coming up it and I realised she had to have managed the chain. My shame blush was brighter than my sunburn. 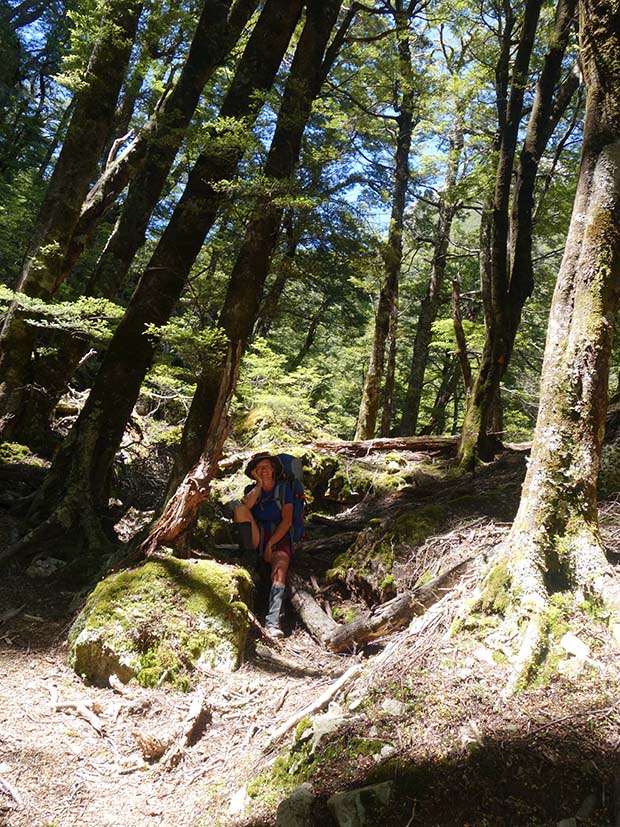 There were people staying at the Dasler Bivy so we went higher. After walking all day, being repeatedly poked by Spaniard (above the bush line, plants are mean, apart from the edelweiss, sweetly juxtaposing the barbs and spears), getting bitten on the lady parts when I did a wee and being so dehydrated I couldn’t even cry about it, I started to lose the run of myself.

“I won’t take one more step!” I shouted at Rusty’s back. “This is absolutely no fun!” My legs had gone full Elvis. Rusty seemed to think his sunglasses weren’t see-through, that I couldn’t see him rolling his eyes. We made camp at 5,000 feet, the stone shark fin of the Pinnacle our bedhead. Below us the braided river plaited the valley, changing its course at whim as it has for eons. I ate two helpings of ready-to-eat mushroom noodles, a cup of chicken soup, half a block of chocolate and all the cheese and crackers and fell asleep before I had time to put down my spork. 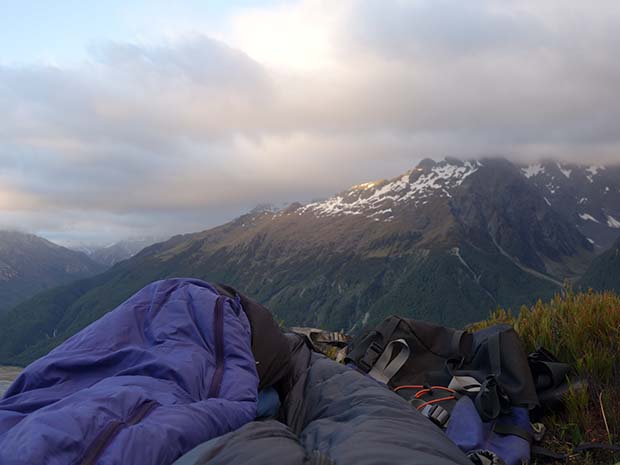 Waking in the night, the Southern Cross shone above, brighter than patriotism. I woke again near dawn to find it had changed position. “The stars are moving because we’re moving! The planet is moving!”
“Better hold on to something,” mumbled Rusty.