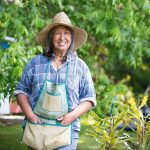 Vanessa Hayes spends several days a month at her property in Torere. 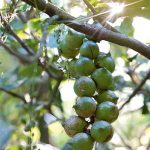 Vanessa set up her macadamia nursery with hopes of establishing a grower co-operative for Māori landowners on the East Coast . 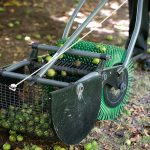 New ‘dropper’ varieties of macadamias have nuts that naturally fall to the ground when ripe, making them much easier to harvest. 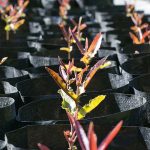 Seedlings growing in the nursery. 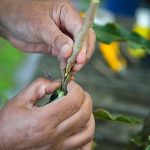 Vanessa grafts scion wood onto rootstock in the nursery. 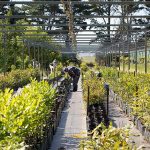 Buttery sweet-tasting macadamias contain the highest amount of monounsaturated fat of any known nut and boast an impressive variety of essential minerals and vitamins. 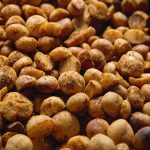 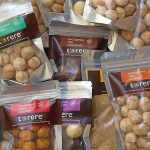 Packets of nuts sold at the Gisborne farmers’ market and on the company’s website. 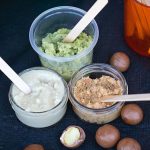 7000 kg crop is sold in bulk as raw kernel, the remainder is made into a delicious range of products including the honey-roasted nuts, dukkahs, pesto and macadamia butters that Vanessa sells at the Gisborne farmers’ market. 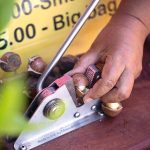 It requires a force of 300psi to crack a macadamia.

Vanessa Hayes, aka the Nut Lady, is on a mission to establish a macadamia industry for Maori on the East Coast

Anyone who has ever tried to break open a macadamia nut might be interested to know that it requires a force of 300psi to crack the smoothly spherical shell – that’s roughly equivalent to the bone-crushing bite of a rottweiler. So don’t even think of using your teeth.
“This is the best way to do it,” says Vanessa Hayes, as she positions a nut in the steel jaws of a vice-like contraption screwed to the bench of her market stall. She pulls back on the lever, applying just enough pressure to achieve a satisfying crack.

“Pull too hard and you smash it,” she explains, as she picks the whole kernel out of its shell and pops it into her mouth.

“I love macadamias. I eat them all the time.” Vanessa protects the grafted wood with a layer of sealing wax.

A successful entrepreneur who runs her own insurance company – Life Broker Services in Gisborne – Vanessa is best known in Māori business circles as the Nut Lady on account of her macadamia interests. Together with her partner, Rod Husband, she owns a large organic orchard at Torere near Opotiki and a small de-husking plant operated by Rod in Gisborne.

More stories you might like:
Video: Sculptor Ben Foster talks about his Kaikoura home and creating his amazing faceted art works

Half of their current 7000 kg crop is sold in bulk as raw kernel, the remainder is made into a delicious range of products including the honey-roasted nuts, dukkahs, pesto and macadamia butters that Vanessa sells at the Gisborne farmers’ market.

The couple also owns the country’s largest macadamia nursery, a business Vanessa set up with hopes of establishing a grower co-operative and local nut industry for Māori landowners on the East Coast – a dream and a challenge that’s proving much harder to crack. Her story goes back some 25 years when, according to the wishes of a great uncle and after multiple hearings in the Māori Land Court, she became the sole owner of a piece of coastal land in her tribal area of Torere.

Independent ownership – unusual for Māori land – gave her the freedom to develop the property as she liked. For Vanessa that meant managing it in a sustainable way with a spray-free easy-care crop that would provide a decent return without damaging the pristine environment. Vanessa’s husband, Rod, and cousin Johnny sweep up the nuts as they fall.

Macadamias fit the bill perfectly, specifically the new varieties that were being trialled in Gisborne at the time. Unlike the original trees that are dense, prickly and require handpicking, the new ‘dropper’ types have a more open canopy with nuts that naturally fall to the ground when ripe, making them much easier and cheaper to harvest.
Vanessa and Rod started planting their orchard with droppers back in the early nineties. With a horticultural qualification under her belt, Vanessa also took over the government’s macadamia research when the Hort Research trials came to an end.

Her subsequent work importing and testing new plant material ultimately secured Torere Macadamias the sole propagation rights (in New Zealand) for these game-changing varieties.
Vanessa’s grand plan was to propagate the best macadamias in the country, not just for her own benefit but also for her fellow Māori landowners, who mostly grew maize.

“It was something I felt very strongly about because I was one of those landowners receiving barely enough return from maize to cover the rates. I wanted to work with them to gradually start replacing the maize with a long-term sustainable crop that provided employment and better returns.”

But despite the advantages of the high-value nut, progress has been slow on the home front. Until very recently, most of the trees raised at Torere were sold outside the region, planted by new immigrants and business-savvy growers in orchards as far away as Banks Peninsula, Taranaki, South Auckland and the Far North.
East Coast Māori have been reluctant to get involved, partly because the older tree varieties (many of which were planted on the East Coast) have given macadamias a bad rap. “People would say there was no money in it. Macadamias? They just feed rats.”

They are also restricted by the very nature of Maori-held land: multiple ownership makes decision-making difficult and financing problematic.

The initial reluctance of her target market was disappointing but worse was to come when the financial crisis of 2008 put the breaks on investment in general.

Orchardists stopped planting and tree sales at Torere slowed to a trickle. The demand for nuts and value-added products kept the business afloat but the bad news kept coming and in 2011 Vanessa was diagnosed with breast cancer. 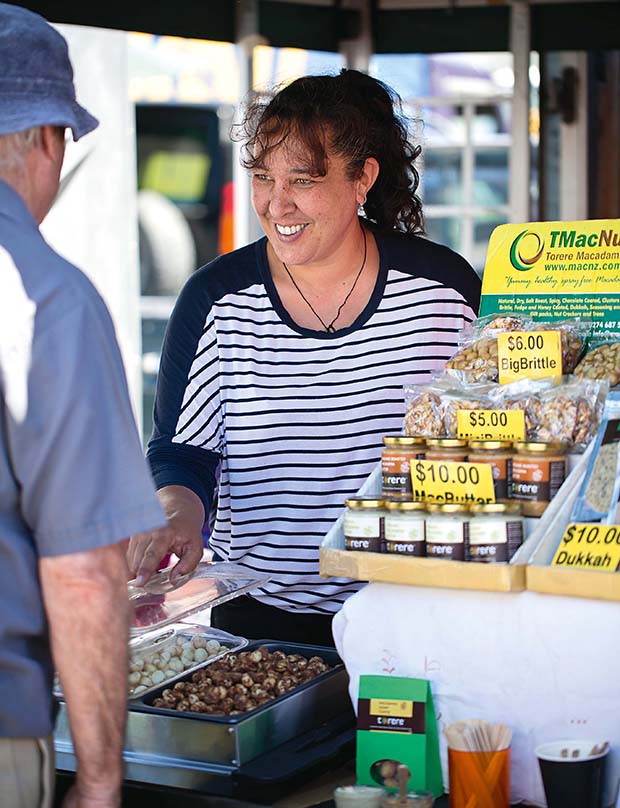 Vanessa’s daughter, Angelina, helps out at the market.

“We closed the nursery, lost all our staff and it was an absolute mess.” The orchard, too, was neglected. “My family was too busy rallying around me. It wasn’t until half way through 2012 when I asked: Who’s picking up the nuts? They were all on the ground. We lost virtually a whole crop in that year.”

It was her son, Walter, who rescued the situation. Returning to Opotiki with his family, he ran the orchard and rebuilt the nursery while Raelyn (Vanessa’s daughter) nursed her through to remission.

“The illness made me realize that if anything happened to me the business would die with me. I thought: No, I’m not going to let that happen.”

She appealed to various Māori agencies for help and together, in consultation with whanau, they developed a strategic plan to future-proof the business.

Knowledge and responsibility for every aspect of Torere Macadamias, from grafting to sales and marketing of plants and products, is now shared with Vanessa’s three adult children and grand-children. Their involvement has not only relieved the stress, it has given Vanessa the time to pursue her major objective.
A canny networker and determined lobbyist she has gained the support of the district council and NZ Trade and Enterprise, and she’s slowly winning over those reluctant Māori landowners.

“They see me down at the market; they see the products, they see the need to diversify and they want a part of the action too.”
At Torere she’s helped establish two new orchards and she’s recently received an initial order of 2000 trees from a large Māori farming station in Gisborne.

It’s a good start towards her goal of planting 10,000 trees in the Tairawhiti region – the tipping point at which the economic development agency will help fund a large processing plant that will service a local co-operative.

That’s her dream. And while she hasn’t quite cracked it, you know that she will. 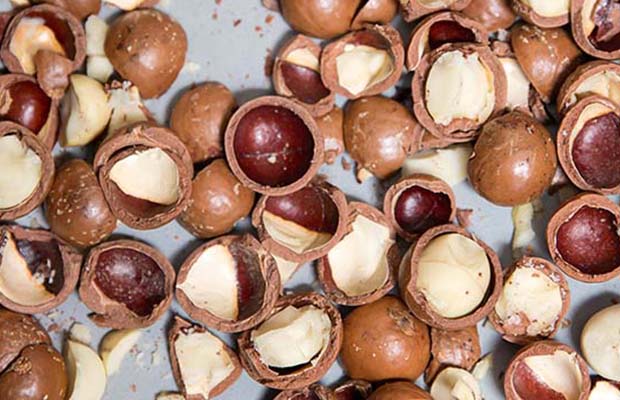 A WORLDWIDE SHORTAGE
Whittaker’s decision to drop macadamia chocolate from its range last year drew attention to the global shortage of macadamias. But Vanessa says this is nothing new:

“We’ve always known there’s been a shortage, which is why it’s so frustrating for us that more people don’t grow macadamias commercially – there’s a huge demand.”

The world’s biggest producers of macadamia nuts are South Africa and Australia, with both producing about 1.4 million kilograms of kernels per annum.

New Zealand produces less than 50,000 kilograms and in 2014 imported nearly three times that amount to make up the domestic shortfall.

MACADAMIAS IN A NUTSHELL
● They are the hardest nuts to crack (Brazil nuts come close) and the second most expensive, after pine nuts.
● Native to Australia, the genus macadamia is a member of the proteaceae family and is related to the New
Zealand rewarewa.
● In this country, the trees are mostly grown in frost-free areas north of the Taranaki/Hawke’s Bay line, but there are commercial orchards as far south
as Nelson.
● Depending on the variety and location, trees will produce nuts from two to five years after planting and at 10 years will yield 10-15 kilograms of nuts (weighed in shell). The current farm-gate price is $4.50 to $5.50 per kilogram in shell. Returns after processing are much higher.
● Main orchard pests are the green vegetable bug and rats. The new spray-free dropper varieties are more resistant to bug attacks and a well-mowed orchard deters rats.