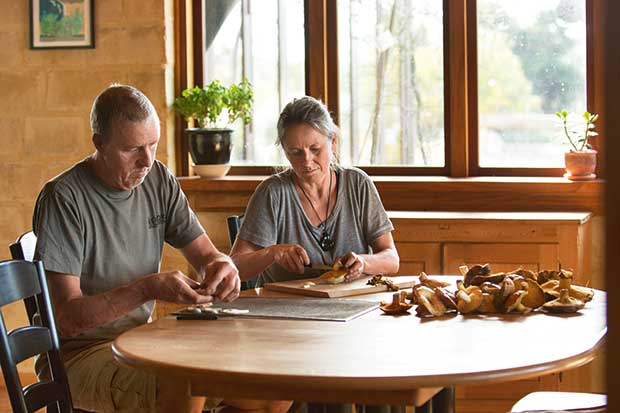 The Krummenacher family business is based on an ancient and dynamic natural system that is going about its important business silently beneath their feet.

For most of the year, there’s not much to see on Theres and Hannes Krummenacher’s block apart from neatly planted groves of pine, birch, larch, hazelnut, oak, chestnuts and Douglas fir.

But growing in and around the root systems of these carefully-chosen trees is a gourmet crop that has won them acclaim from chefs and foodies around NZ.

You can’t see it, but you have to be careful where you walk so you don’t damage it. 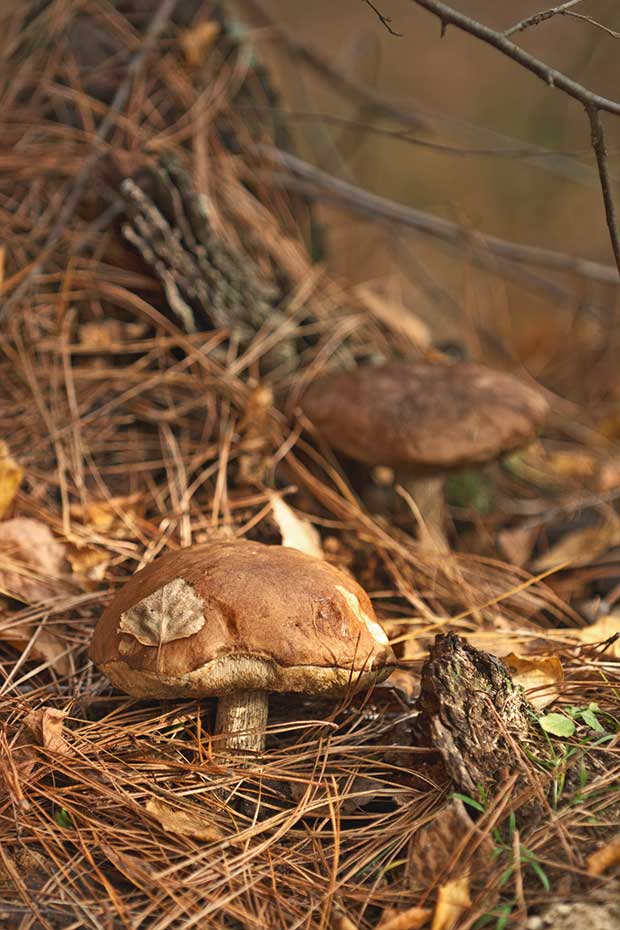 The Krummenachers farm mycorrhizal mushrooms, fungi that grow in a symbiotic relationship on the roots of specific host trees.

“What we see above the ground and harvest for a short time every year are the fruiting bodies of the fungi,” says Hannes.

“These are only a tiny part of the whole picture. Beneath the ground is an amazing process of mutual exchange going on between the host trees and the mycelium threads, or hyphae, of the fungi. The fungus actually penetrates the cell walls of the roots of the trees and exchanges nutrients in return for sugars produced by the tree as a result of photosynthesis.” 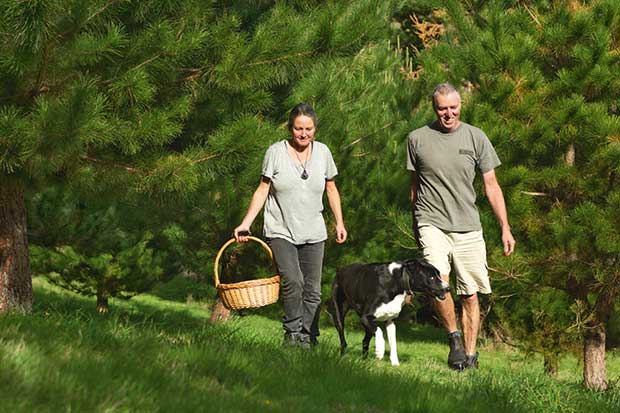 Hannes and Theres were the first commercial growers of edible wild mushrooms in New Zealand, including one of the most popular in the world, the clay-coloured saffron milk cap, Lactarius deliciosus.

Slippery jacks (Suilius luteus) and pine boletes (Suilius granulatus) were already growing under the pine trees on the property when the Krummenachers arrived. They have since added stands of birch, larch and Douglas fir trees inoculated with their respective bolete varieties, Leccinum scabrum, Suillus grevillei, and Suillus lakei. 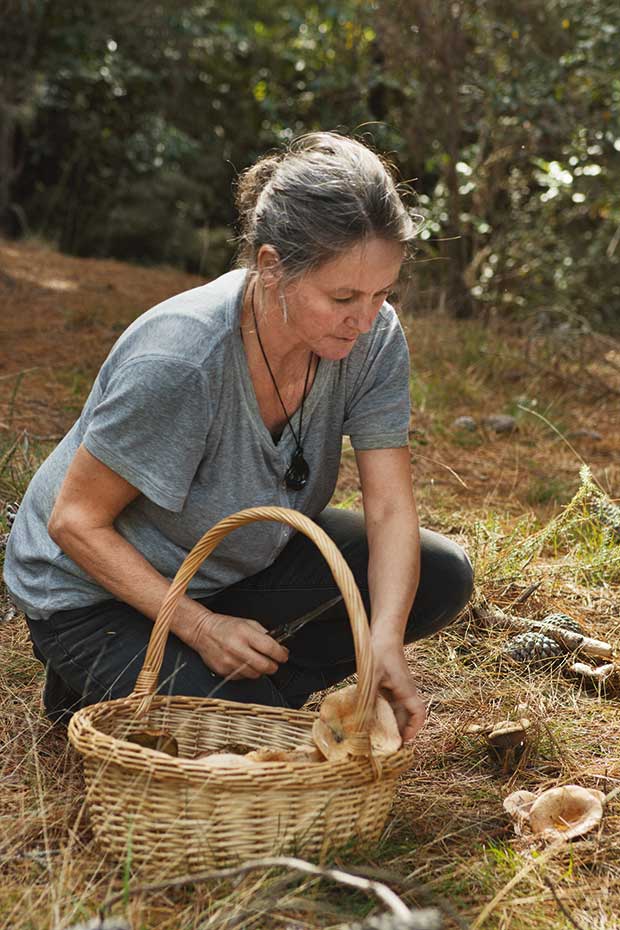 The couple has over 4500 trees devoted to mushroom production and more are always being added as replacements, and to expand the growing area.

Initially, their pine plantings were Pinus radiata, the same species used over much of New Zealand for timber, but Hannes and Theres are now replacing them with stone pines (Pinus pinea). Theres says he wishes they had planted more of these in the beginning. 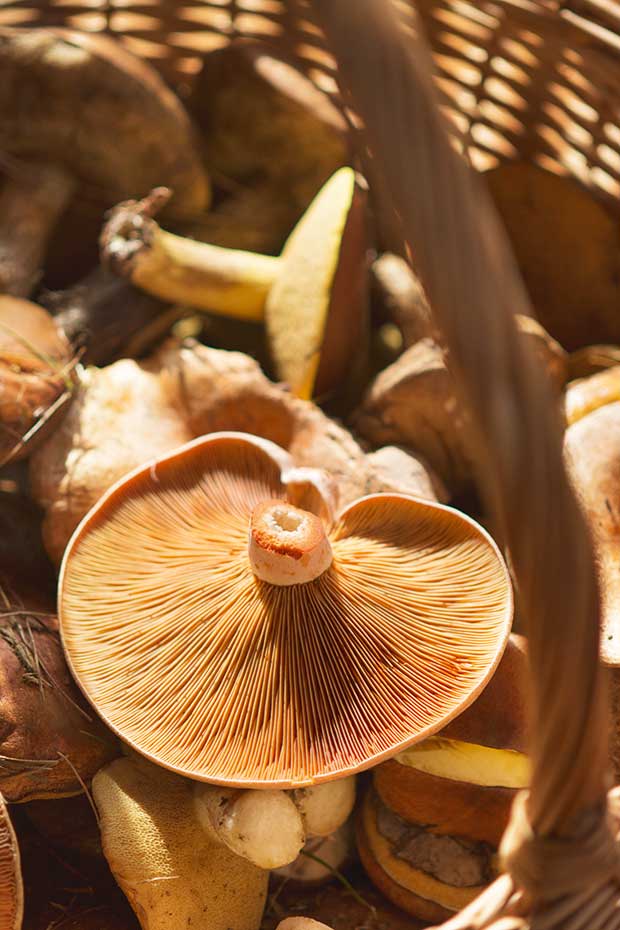 “Stone pines are so much better, being a slower-growing tree with a compact, round shape rather than tall and lanky, plus there will be pine nuts to harvest one day.”

The trees are the guardians of their mushroom emporium but have also contributed to a blossoming of local birdlife.

Growing a crop you can’t see

The trees here aren’t allowed to go wild. In order to nurture the fungi, Hannes and Theres undertake an annual pruning operation after the mushrooms have been harvested.

Unlike common white button mushrooms that grow in the dark, mycorrhizal mushrooms need the heat from sunlight to develop underground. This means branches and debris must be regularly cleared away to let in more light. 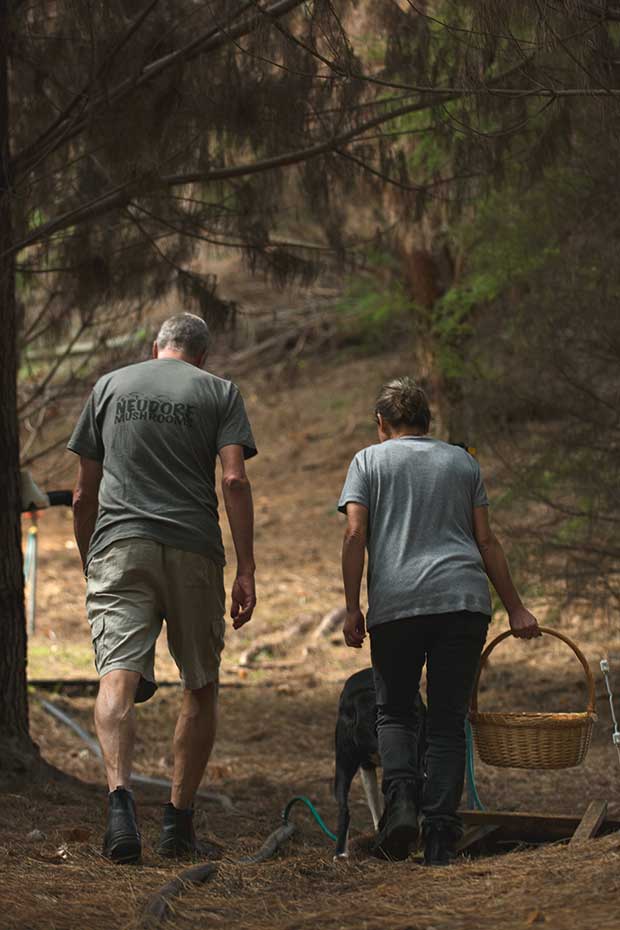 The couple found slipper jacks and pine bolete mushrooms growing beneath pine trees on their block when they bought it.

In many European forests, owners create fire pits for mushroom foragers to use. Their gathering and burning of fallen branches help the following year’s crop by clearing out debris from the forest floor.

Hannes has taken inspiration from that tradition. All the timber from the prunings on their block is used to fuel a custom-built wood-fired dryer for their crops. The burner runs 24-7 throughout most of the harvesting season, from late March until the end of July.

The trees are irrigated as moisture plays a big part in activating fungal growth. 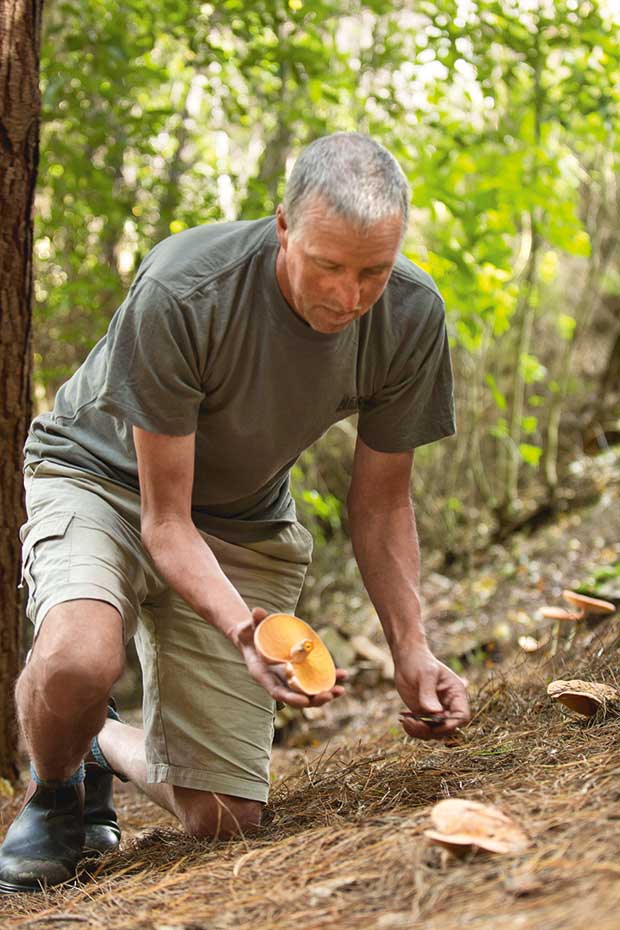 However, there is no chemical spraying near the trees, and no application of fertiliser as mycorrhizal mushrooms don’t like it.

There is also a year-round pest control plan, to stop possums, hedgehogs, and rabbits from stealing in and grazing on the mushrooms as they emerge. Hannes and Theres operate on organic principles, except when it comes to gorse. This gets sprayed when it is in the fields without mushroom crops in them.

Thankfully says Hannes, there is less each year. 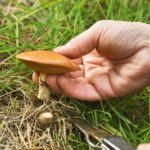 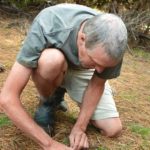 In the off-season, the neighbour’s sheep and cattle are employed to keep the grass down. They are removed once the delicate soil starts to show signs of mycelium growth. Pre-harvest, the pasture between the trees is mowed very short to give the mushrooms light and space, allowing them to pop up and show themselves.

A long summer with consistent heat is the main ingredient to ensure a good harvest. In late March, the mushrooms begin appearing and it’s all hands on deck for the harvest.

Their rapid growth can mean that Hannes and Theres – often assisted by their grown-up children, Curdin, Cecile, Chatrina and Anja – can harvest up to 50kg a day, contributing to an annual total of around a tonne. The mushrooms are then peeled, cut, dried, and sold or turned into other products. 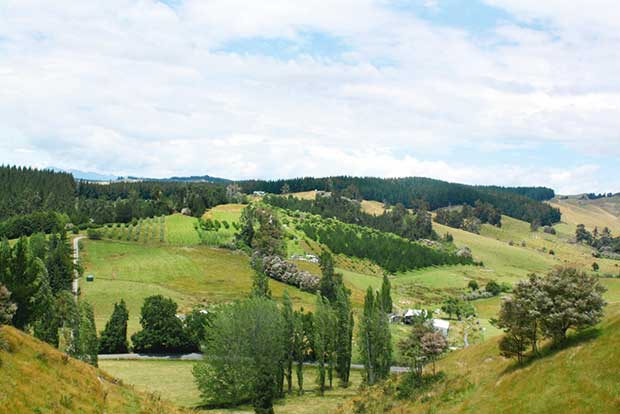 The couple likes to keep busy when their main crop is quiet. They also grow olive, chestnut and hazelnut groves. If there are enough olives to press, they make a mushroom-infused oil. They’ve also added a new product to their line, molasses made from the tips of Douglas fir.

Hannes and Theres have relied largely on their observations of natural processes to make the business a success. Meticulous record-keeping means they can now predict the growth of the mushrooms down to days before harvest by taking note of weather patterns and other ecological signals. Over time, this attention to natural rhythms has produced an in-depth knowledge of the lifecycle of fungi and their role in a forest. 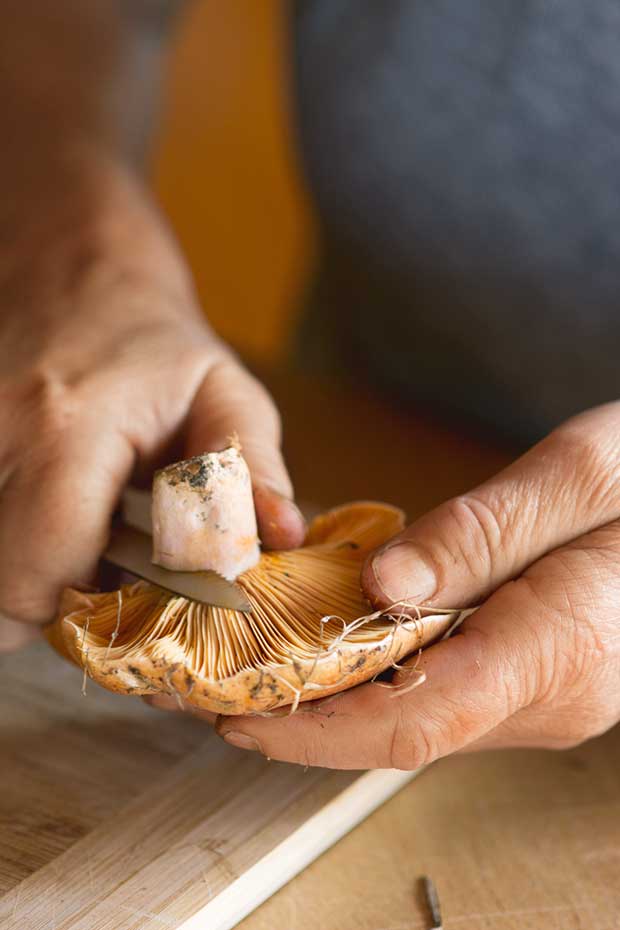 Hannes built the wood-fired dryers himself (see below). These run 24 hours a day, seven days a week throughout the growing season. Mushrooms are sliced, then laid out on trays which slot into the dryer.

Creating a business from wild mushrooms was not the main goal when they bought their block back in 1998. Hannes was an electrician and trained-midwife Theres took care of their children and developed the land. They built a spacious, solar-powered, mudbrick home over 10 years.

Hannes finally put down his tools when it was clear that they could make a living from their mushrooms. “It was a safe way to operate,” says Hannes. “A low risk with no large initial financial investment, and even if the mushrooms didn’t grow we figured we could still harvest wood from the trees.”

Hannes and Theres stress that they are growers, not mycologists. They say they continue to learn from the fungi and host trees, educating themselves, their market, and visitors.

More stories you might like:
Meet the Wānaka ice-cream makers churning out homegrown (and award-winning) boysenberry ice cream 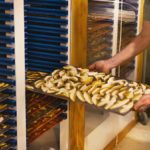 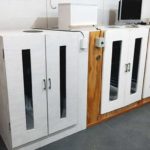 “We’ve had it from the beginning,” says Theres, “This mushroom thing.”

HOW TO SPREAD THE FUNGI

To propagate their crop, the couple takes mycelium at the same time as they harvest the mushrooms.

If you carefully dig out some of the soil around the base of a mycorrhizal mushroom as you harvest it, you will see delicate mycelium threads attached to its base. 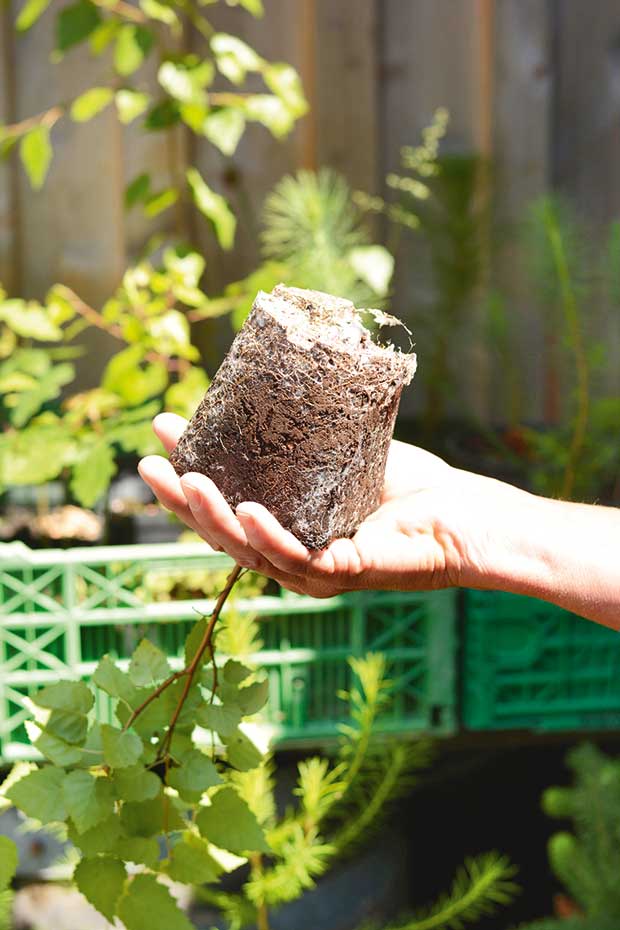 Hannes and Theres take specimens and put them into the bottom of pots, cover them with potting mix and then add a young seedling of the appropriate host tree.

When planted out, the tree will have a fungal population present, ready to collaborate and grow with the tree as its roots begin to spread.

ABOUT THE MUSHROOMS OF NEUDORF VALLEY 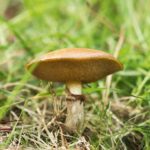 Saffron milk cap (Lactarius deliciosus): This is a firm, dense mushroom with a nutty, earthy flavour, a terrific meat substitute with a texture somewhere between halloumi cheese and a tender steak. Known for the golden-orange milk that oozes from its freshly-cut flesh. 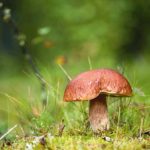 Porcini (Boletus edulis): Said to be one of the finest eating mushrooms in the world, can be used fresh or dried, adds a rich, earthy, woodsy flavour to pasta, risotto, soups and sauces. 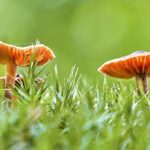 Deceiver (Laccaria laccata): Named because it can vary quite markedly in colour as it ages, grows under pines and birches. 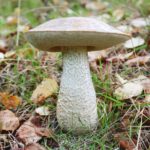 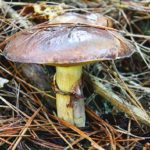 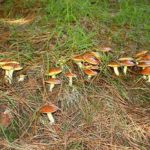 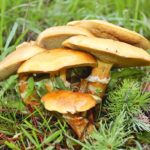 Larch bolete (Suillus grevillei): Boletes are slightly different from regular mushrooms, having pores on their undersides which look like a sponge instead of gills. Theres and Hannes dehydrate them to intensify their flavour and sell them as a mix they call ‘dried wild mushrooms’, used to add a rich, deep taste to dishes. 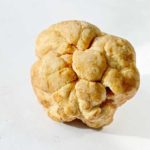 White truffle, Bianchetto (Tuber borchii): Can grow under oaks, hazels and conifers, known for its complex flavours and high price (around NZ$3000-$4,000 plus GST per kilogram). 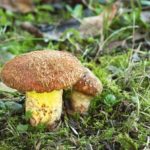 Painted suillus (Suillus lakei): These grow under Douglas fir. Noted NZ truffle and mushroom expert Dr Ian Hall writes they can be used in place of porcini in dishes and have a superb flavour and aroma.

Why New Zealanders are not natural-born mushroom foragers

The health benefits of portobello, shiitake, oyster, Swiss brown and button mushrooms (plus how to cook wild mushroom soup)

How to grow mushrooms at home using a fungi spawn kit