Although not exactly living next door, James and Polly’s new friends are models of neighbourliness

When a neighbour informed us last winter that he was planning to walk from his place to ours, we didn’t exactly rush to put on the kettle. With half a dozen valleys of dense native forest between us, we knew it would be a while before he appeared.
As the months passed we’d occasionally run into him at the Bush Fairy Dairy and hear a progress report. “I think I’m nearly there,” he’d beam or, after yet another false turn into an uninhabited valley, “I’ve just got to check out Google Earth again”. And then, one mild spring afternoon when his arrival had been all but forgotten, we heard a triumphant shout and there he was, waving his machete in jubilation as he emerged from the bush at the back of our house.

Despite such prolonged exploration, the actual pathway he’s lightly forged through the hills takes just a couple of hours to walk. Declaring it officially open a few weeks later he guided us along it, offering a running commentary on the plants we passed and bringing native orchids and rare creepers forth from the foliage as he named them. Inspired by his success, there’s now talk of creating a network of forest paths to keep our community linked in more interesting ways than those provided by the roads.

James and I arrived like two witless children expecting to “play house” in the woods so the connection with neighbours has been a lifeline for us as we’ve started our off-grid existence from scratch. As well as offering practical advice on everything from seed sowing to building to rigging up a gravity-feed from the stream, they have also provided hot showers, internet, dry space, tools and morale-boosting hugs in times of need.

One neighbour in particular has advanced us on the land more than anyone else, becoming one of James’ heroes in the process. Quietly spoken, Ray’s the sort of man who repairs broken-down machines with little more than No.8 wire and has a knight-in-shining armour knack of appearing just when he’s most needed.

When we built our ford it was he who helped us block off one side of the stream, then the other, showing us how to bend rebar, pour cement into forms and place rocks in the concrete apron to aid the native eels and koura in their migrations. He also arrived on our site the day the truck with the Hiab came in to raise our roof, wordlessly scaling the scaffold to help anchor the 9.5-metre trusses onto the wooden bearers. 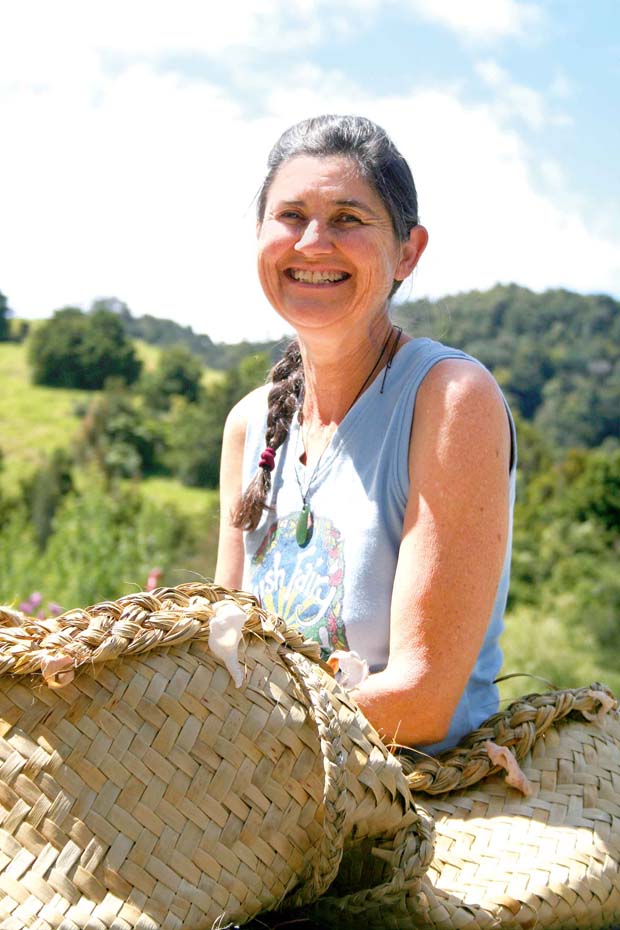 Janika with her flax coffin.

His partner Janika is a practical sort of woman who diagnoses plant maladies, recommends what herbs to take in times of fever and other ailments, dispenses chunks of bull kelp to soothe teething babies, weaves everything from yoga mats to coffins out of flax and makes useful suggestions when we watch in alarm as our chickens grow droopy of feather. During the hotter months, she also distributes ice packs for our chilly bin.
While the lack of a refrigerator isn’t an issue in winter, when the summer heat’s rising from the land in a cicada-thrummed haze and the water’s running warm from the tap, the concept of a chilled drink becomes ever-more covetable. When we first arrived, our pantry consisted of a camping safe hung in a shady thicket. It wasn’t long, however, before the cunning bush rats worked out how to climb down the ropes and force their way in. We encased the whole thing in chicken-wire but opening and shutting it became such an exercise in exasperation that we eventually abandoned it for a chilly bin.
Even though this prolongs the life of fresh food by a couple of days James, who’s omnivorous, gets to eat meat only on our weekly town day – unless he fancies possum stew which, I’m relieved to report, he usually doesn’t.

In the next post, wild pigs discover the garden, a giant millipede shares the bed and the dreaded bronze beetle pays a call.