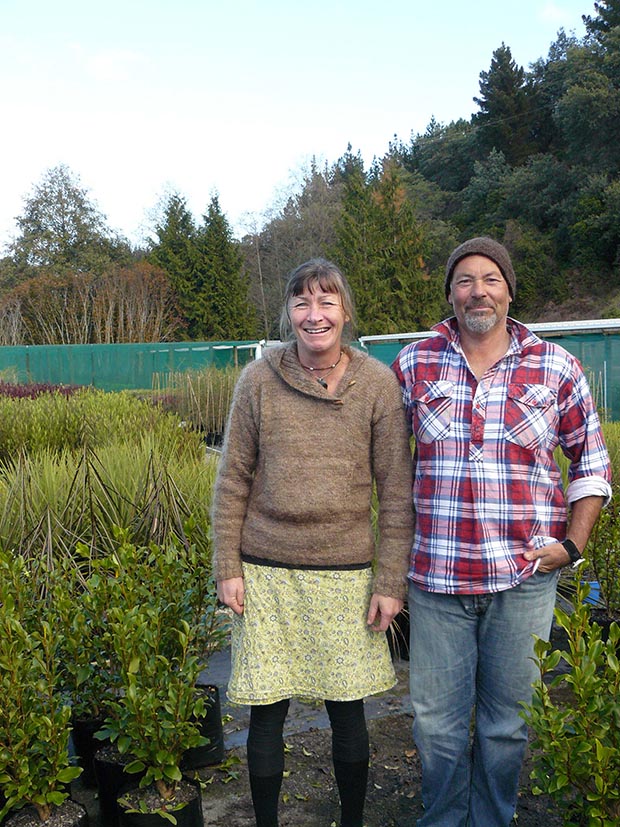 A nursery with an eco heart is supporting local habitat, local gardeners and its owners.

When you picture a tree nursery, most people envisage a large area of land devoted to rows and rows of plants. A visit to Westbank Natives near Motueka and you can see what’s possible on a much smaller scale. Pete Taia and his partner Hannah Mae have just 2ha but raise approximately 50,000 native plants from 130 species for sale each year, and the number is growing.

This is the first year that Pete hasn’t worked outside the block. He’s so confident the nursery is now big enough to pay its way, he’s given up his summer job as a water taxi operator in the Abel Tasman National Park. And it has to pay its way because Pete and Hannah are not interested in getting into debt anytime soon. Their decision to live simply, with the land, was the main driver to establish the nursery and their primary goal is to move towards a better, more fulfilling lifestyle.

It’s reflected in their ‘keep it simple’ business philosophy. They collect the seed and stock locally, grow it under local conditions, and sell it for planting back into the environment it is best suited to. 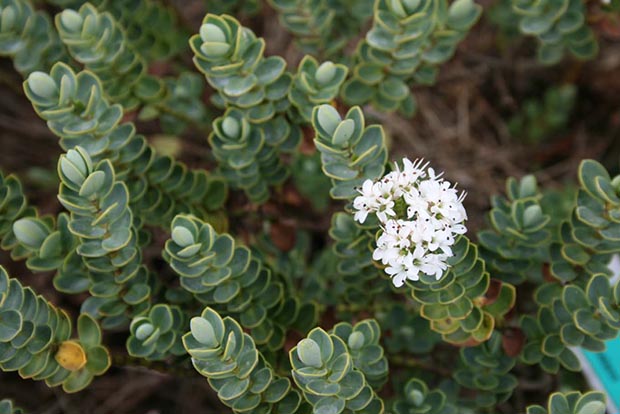 But establishing a fully functioning native tree nursery didn’t happen overnight. In Pete’s case, it took a wide range of occupations to get to the foundation of the nursery back in 2005. He did a three-year horticulture cadetship growing kiwifruit in the mid-1980s. This was followed by bee-keeping for three years in the 1990s, where he mainly moved hives around for pollination purposes. Then it was off to sea as a fisheries observer, with four trips to Antarctic and many journeys in New Zealand, Australian and Pacific waters.

The sowing of the seed of an idea for a nursery came when he owned a restaurant and bar in Fiordland and began to revegetate his block. The plants came from Homecreek Nurseries, one of the first in New Zealand to specialise in eco-sourced re-vegetation plants, many of which were planted around the Manapouri power station building site. GOING OFF-BLOCK TO STAY ON TRACK
Learning through trial and error was an integral part of getting the nursery up and running, but as Pete and Hannah point out, you can’t run a business on trial and error.  This is where working off the property has been so crucial to the survival of Westbank Natives.

Pete studied during his downtime at sea. He made plans, read up on different tree species and how to propagate them, and then would try them out when he got home. This way, he covered his back until he knew he could make a go of it.

Hannah is still working off-block at the Cawthron Institute full-time as an ‘oyster midwife’, helping out in the nursery when necessary. She also harvests hazelnuts from their trees and these are sold at the front gate through winter. Most of Pete’s year is now based around growing trees from seed, but he does do some growing-on work which involves buying seedlings from other local nurseries and keeping them until they are up to size for planting. Seed harvesting is generally finished around May and his shed fridge is full of little plastic bags with a bit of soil in each one. These precious seeds will sprout to become the crops for the following year.

Pete and Hannah gather the majority of the seeds they use within a 10km radius of their property, from sites like Marahau, the Riwaka Valley, Wangapeka, Takaka and the Motueka Valley. “Basically as far as a bird flies comfortably in a day and passes it out, along with its own fertiliser,” says Hannah. 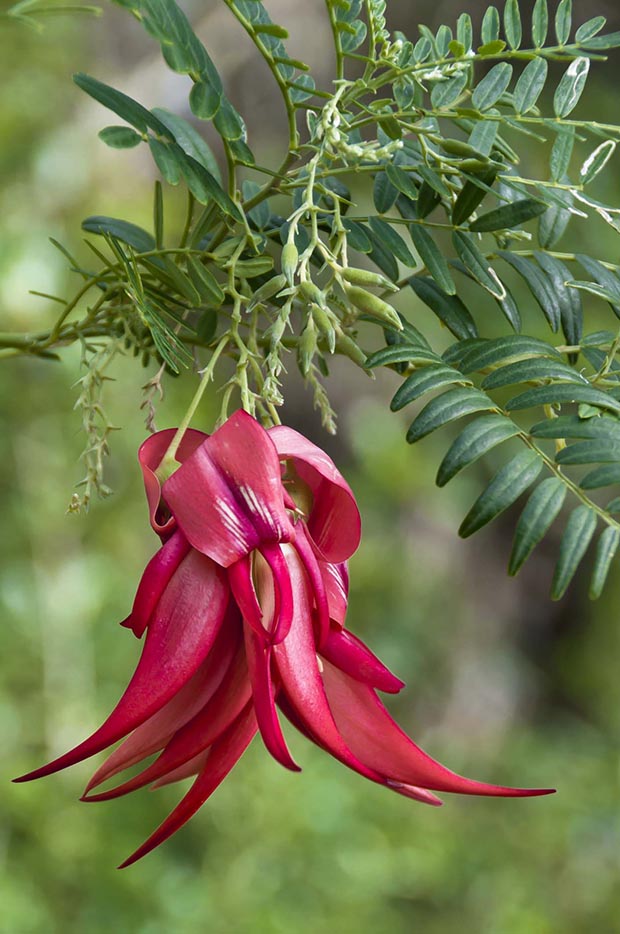 The problem is the increase in hybrid cultivars, which is why they like to travel to more isolated areas to protect the integrity of their plant sources. This is also why Pete prefers to call his seed ‘local’ rather than eco-sourced. “How ‘eco’ is it really when there is and has been so much movement of plant material around the country?”

He sees the protection of certain species almost as a nurseryman’s duty. For example, New Zealand’s native kākābeak (Clianthus puniceus) is surviving right now because of nurseries propagating it. At last count, there were approximately 100 plants left in the wild, and many of these are only surviving because goats and deer can’t reach them to browse on them.

Pete has also been growing Hebe carnosula, a rare species of veronica from the Richmond ranges for the same reason. Now there are new issues like myrtle rust threatening native species, he says it’s even more important to slow down plant traffic and propagate rarities. 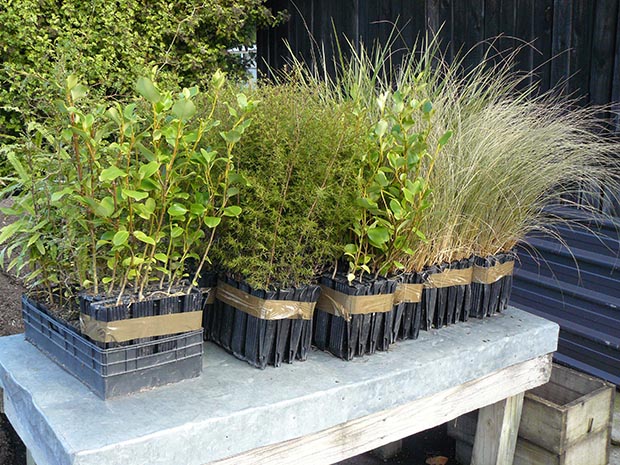 THE OTHER BUSINESS: LANDSCAPING
Westbank Natives is riding high on the current trend for using natives for landscaping. The majority of Pete’s consultancy work, which he calls landscape re-vegetation, focuses on lifestyle blocks where native planting is often required by council as part of the consent process.

He’s keen to give councils a pat on the back for initiating these regulations. It’s his hope that along with public pressure, it will mean more planting along waterways on farms, and in towns and cities, to increase and preserve water quality. He also spends part of his time educating people about trees, what and where to plant, and how to look after them. In the Tasman district, many new lifestyle blocks are on land that is recovered from orchards, forestry or farming, each with unique qualities that can make or break plantings. The desire to plant for native bird life is also strong.
“People want more contact with nature in their own backyards.”

Many people see natives as low maintenance, but Pete says it’s crucial to monitor them. He puts a lot of energy into encouraging people to regularly check on their plantings and care for them to get the optimum results and value for money.

“Much of the time, I’m dealing with lots and lots of nothing or alternatively, areas planted in exotics. In every case, I go in there and say ‘now, if it was me…’ and give them lots of options.” Winter is a mad rush of customers when everyone is keen to get trees in the ground. During June, July and August, Pete spends the beginning of each week doing consultancy appraisals and plantings. On Thursdays, Fridays and Saturdays, the nursery is open for business to the general public. The nursery reflects Pete’s artistic talents. Colours and textures are artfully positioned in rows side by side, adding to the delight of looking at the plants for sale. Pete and Hannah strive to present plants that are both healthy and hardy. The result is that it’s not uncommon for people to turn up wanting one or two trees, and drive out with a car boot full. Most wholesalers don’t sell individual trees to the public but Pete and Hannah feel strongly that there is definitely a place for the personal approach that their nursery offers.

In between potting up seedlings this spring and summer, Pete is keen to indulge in more of his other passions, hunting and fishing. But first, he’s going to get stuck in and clear up the far end of the property to make room for more trees because he and Hannah feel the demand is going to keep on growing. 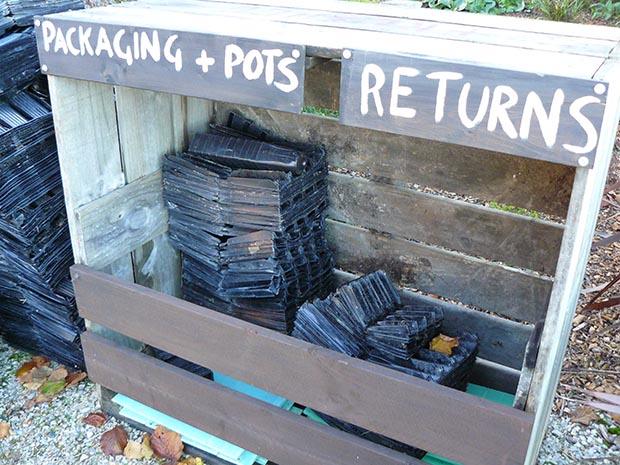 People are often scared to get started but Pete has found all they need is a bit of direction and some ideas and away they go. Nine times out of ten, once the initial project begins to grow (literally), people are back for more. “I’m not into just slapping trees in the ground any old how,” he says. “For good results, I have a personal mantra: right thing, right place, right time.

“To be honest, a bare piece of land is like a blank canvas to me. It just gets my wheels spinning and I love to problem solve, using texture and colour and layering to produce, not just a patch of native trees, but a sort-of work of natural art that is pleasing to the eye. “And as long as I don’t have to sit inside, I’m happy.” 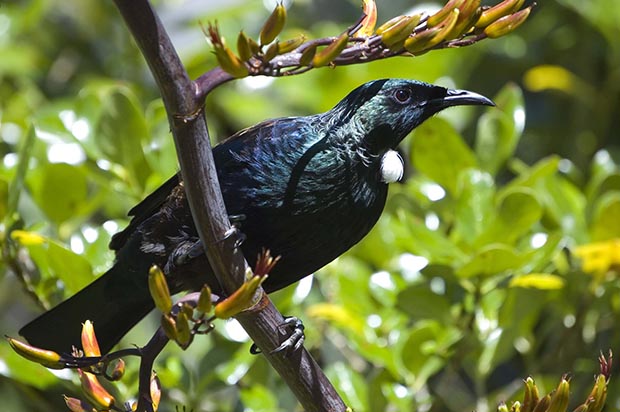 PETE’S 7 TIPS ON PLANTING OUT
1. Don’t get too fancy on bare sites. Plant for shelter. Once those trees have reached a good height, fill in the gaps.
2. Look around at the immediate environment to see what natives are growing and what is thriving.
3. Scrutinise climactic factors, especially rainfall and wind.
4. Check out your soil. Mortality rates increase in areas that are too wet or too dry.
5. Think texture, colour and layering, eg native grasses in the front followed by lower growing shrubs and trees like hebe and kowhai, backed by cabbage trees and larger, taller species.
6. Plant larger specimens in groups of three for good effect.
7. Look after what you plant, especially smaller grade plants that come out of root trainers. Use corflute tree guards (450 size) to protect the seedlings and throw a grow tab in every hole before you plant. Weed around the trees and feed them a bit of fertiliser in autumn and spring.

HOW TO COLLECT AND STORE NATIVE TREE SEEDS

Pete spends a large part of the year collecting seeds, and storing them is an important part of his work. 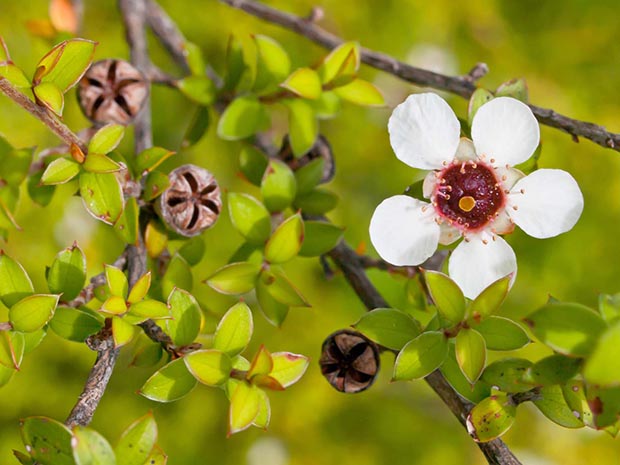 • Stay away from hybrids and cultivars, especially coloured flaxes. Generally, if you plant those types of seeds you will get massive variation, not necessarily the stripey plants you want.
• Look for seed in remote areas that have low human activity. Get permission from the landowner, which can include DOC or your regional council if it is a public park or reserve.
• Mix the seed with a bit of a peat-based seed- raising mix in a labelled plastic, resealable bag and refrigerate over winter, a technique known as stratification.
• In spring, sprinkle the contents of the bag onto a tray that contains a good quality, free-draining, seed-raising mix. Water every now and then and leave to germinate in a warm, sheltered spot but not in direct sunlight.

WHY GIVING BACK TO THE LOCALS IS ALSO GOOD FOR BUSINESS
Community projects have been a good opportunity for the business, showing people how to get good results. Pete has been involved with a project to re-establish planting along the old Motueka River bed, provides advice to local schools on re-vegetation projects, and donates trees and vouchers for fund-raising events.

Pete has a dedicated local planting crew on-hand in winter, who work on a contract basis. “They’re fit, strong, keen young people who are not just doing this for a job but because they love the New Zealand environment and want to help out with conservation and re-vegetation projects. Many of them work in summers as guides in the park and then come work for me in the winter. It’s a win-win situation for us all.”