Why a muddy mess of a paddock is bad news 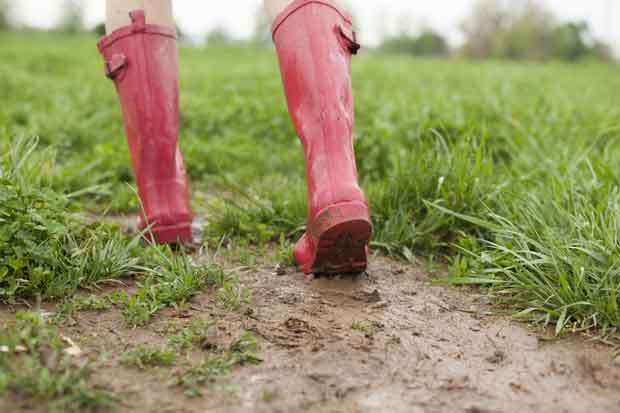 No-one likes mud, and it’s something you need to manage carefully or the damage to soil can be devastating.
Words: Nadene Hall

When stock trample wet (near saturated), soft soil, the spaces among the soil and the soil aggregates (lumps of soil particles) are broken down because the soil cannot hold the weight of the stock. This causes pugging to occur, muddying up a paddock, tearing up or burying pasture plants and damaging the root system.

If the soil isn’t that wet, it won’t get pugged but it can get compacted. This has a similar effect to pugging, reducing the amount of air and water in the soil and creating bad growing conditions anywhere from 2-12cm down.

Paddocks most at risk are those that have suffered pugging in the past, areas with a high water table or those with little or no drainage.
Just because a property is hilly, don’t think soil damage isn’t a problem. Animals slipping in the wet, ripping off grass and a thin top layer of soil causes erosion and loss of nutrients.

– On wet soils (moisture content above 40%) in the winter and high stocking rates (greater than 300 head per hectare per day for 24 hours every 4-6 weeks) the pasture growth rates were reduced by as much as 50%. This reduction persisted throughout the spring and summer but by the autumn the pasture growth rates appeared to have recovered. Over the first twelve months this amounted to a 35% reduction in pasture production, or a drop in effective carrying capacity of over 3.2 stock units per hectare (su/ha).

– A drop in white clover production of over 50% and consequently a reduction in the ability of the sward to fix nitrogen.

– The impact on the soil resource was even more pronounced. The ability of the soils to drain water, under saturated conditions, fell from 57mm/hr to 16mm/hr at the end of the first year. Earthworm numbers were also reduced more than threefold by the effects of cattle during the first year.

– Not all stock treading was negative in the first year. For example, on moist soil (less than 40% water content) and medium stocking (150head/ha/day for 24 hours every 4-6 weeks), legume growth was enhanced by cattle hooves breaking up the browntop turf and creating niches for white clover to exploit. This however did not persist into the second year.
(Taranaki Regional Council, Managing stock on wet soils)

IF YOUR SOIL DOES BECOME PUGGED AND/OR COMPACTED, YOU WILL HAVE ONGOING PROBLEMS:
• Poorer drainage in future, where the soil will remain softer and wetter and the herd will do ongoing damage at following grazings.
• Damage to pasture reducing utilisation by 20- 40%.
• A reduction in future pasture yield to between 20-80% for 4-8 months, depending on the soil type.
• More tractor passes required for seedbed preparation and sowing.
• Greater fertiliser requirements and topsoil and contaminant run-off.
(Dexcel FarmFact 3-21)

These figures are for highly stocked commercial properties but even small areas of pugging or compaction can have a big influence on your pasture growth if you are only grazing a few acres in total.

– Make sure there is good grass cover, and graze from the back to the front – longer pasture will be protected as stock walk over it. Pasture length of 120-150mm is best. Fence off behind cattle so they aren’t constantly walking over areas of the paddock during a rotation.

– Use lighter stock on land that is more at risk of pugging.

– Because stock tend to move around more during the day, pugging damage increases in daylight. If you have to move stock, do it before day break.

– If all your paddocks suffer from water-logging during winter every year, consider putting in some sort of drainage. It is best to talk to a drain specialist about this, as if it is done incorrectly you can end up worse off.

– Commercial farms use on-off grazing to good effect, allowing stock around 4 hours of grazing time on good paddocks each day, then holding them on a “sacrifice” paddock the rest of the time, supplying supplementary feed as required.

– Change the way you manage your property, buy young, lighter stock to run through winter, or only use sheep and buy in cattle once the weather dries out.

– Spread the stock out so they cover a larger area, perhaps split up a herd so your stock to paddock ratio is halved (although this isn’t a long term option because pugging damage will still occur, it will just take longer to do major damage).

– Rate your paddocks on their likelihood of pugging and plan not to use the ones that get muddy easily, or fence off areas that are prone to pugging within an area.