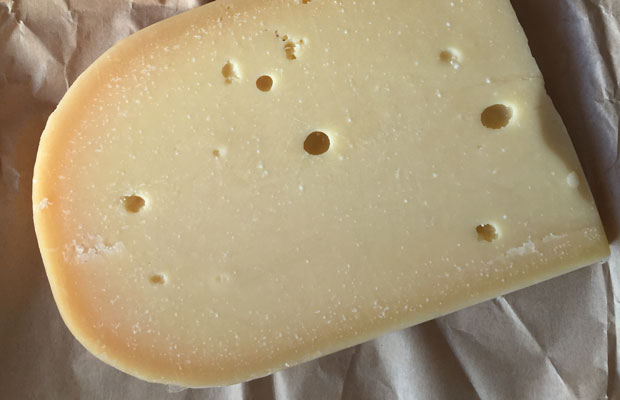 This is the best artisan cheese in New Zealand. Again. It’s the creation of a master of cheesemaking, Albert Alferlink of Mercer Cheese, who sells his creations out of a small store on a side street, just seconds off State Highway One at Mercer.

This gouda is a perfect blend of 50% cows milk, 50% sheep milk – called Fifty-Fifty – and to make it you need to be a patient person. Its flavour develops over several years, and it requires the perfect blend of late season milk to get its tangy, well-balanced flavour.

The white spots you can see are tiny, crunchy clusters of amino acids, a sign of a well-aged cheese. What you can’t see is the creamy waft of gouda that gently floats up your nostrils. It’s extremely difficult to make yourself photograph this cheese because all you want to do is eat it.

Albert has been making cheese for 36 years, starting with two Brown Swiss cows. These days he and his wife run dairy and a cheese factory on their farm at Onewhero, 20 minutes from the shop.

When I went to nab what I know will be a limited run of this beautiful cheese, the lady in the store told me Albert had come home from the Champion of Cheese Awards late on Tuesday night. Instead of first telling his wife of his win, he did what any champion cheesemaker would do. He went into his factory to check on his cheeses.

The Champion of Champions 2017 were:

You can see the full lists of Gold, Silver and Bronze medal award winners here, a celebration of the stunning cheeses of NZ.