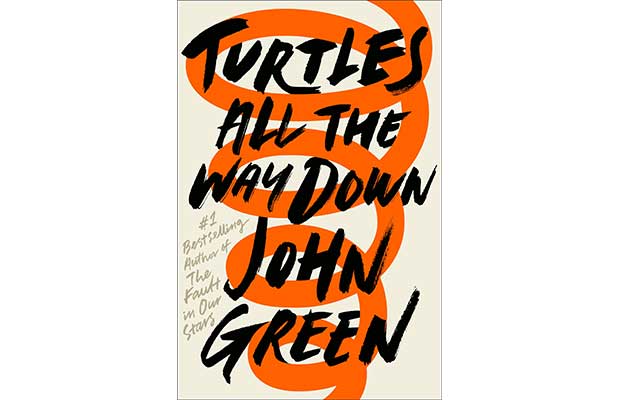 The Off-Topic Book Club has a lively discussion about John Green’s latest novel Turtles All the Way Down. The club discuss the depiction of mental illness, tuatara and the Young Adult genre.

Sixteen-year-old Aza never intended to pursue the mystery of fugitive billionaire Russell Pickett, but there’s a hundred thousand dollar reward at stake and her Best and Most Fearless Friend, Daisy, is eager to investigate. So together, they navigate the short distance and broad divides that separate them from Russell Pickett’s son, Davis.

Aza is trying. She is trying to be a good daughter, a good friend, a good student, and maybe even a good detective, while also living within the ever-tightening spiral of her own thoughts.

In his long-awaited return, John Green, the acclaimed, award-winning author of Looking for Alaska and The Fault in Our Stars, shares Aza’s story with shattering, unflinching clarity in this brilliant novel of love, resilience, and the power of lifelong friendship.

Listen on our podcast channel on iTunes to never miss an episode.

Or visit our podcast mini site

I hadn’t read a John Green novel before Turtles All the Way Down, but I have seen two of the film adaptations of his books – Paper Towns, and of course, The Fault in our Stars. While I was prepared for a good read, I wasn’t expecting his writing to be as beautiful as it is. Green is a truly gifted writer – this book delves into the darkest depths of OCD (obsessive compulsive disorder) and anxiety. It isn’t always an easy read (I ended up shouting in frustration at the lead character Aza), but Green intertwines a tough subject with beautiful quotes and metaphors that deserve to be underlined, or printed and stuck to the fridge. I would recommend this book to anyway (young adult or just adult) keen to develop a better understanding of mental illness, or just anyone who appreciates really lovely writing – Cheree Morrison

The teenage mind is a foreign land to me – about as foreign as the philosophical question referenced in the title Turtles All the Way Down. I both enjoyed Green’s masterful writing and valued his insights into that foreign land of a young person’s world view. Less helpful was my encounter with Wikipedia on the meaning of the title: “Turtles all the way down” is an expression of the infinite regress problem in cosmology posed by the “unmoved mover” paradox.” Gosh, sorry I asked.
Next question: Would I give this book to a teenager? Only after I’d asked their parent to read it first. – Kate Coughlan.

There’s an unfair stigma about YA (young adult) fiction. As though if a book features younger characters, which might appeal to younger audiences, that it is an easier read, not challenging and unworthy. To Kill a Mockingbird is told from a child’s perspective but that was long before the genre Young Adult existed. The characters in Turtles All the Way Down are teenagers – but their problems are as serious and meaningful. The book follows 16-year-old Aza who is crippled by her anxiety and compulsive thoughts; her problems escalate when her best friend Daisy convinces her to solve a mystery surrounding a friend’s disappearing father. I’ve read John Green’s best-selling The Fault in Our Stars, an understated tale of teens with terminal cancer, and I think Turtles All the Way Down surpasses it. This is a well-written, beautiful read and Aza’s experiences are written sympathetically from her own point of view as well as those that are effected by it. Oh, and New Zealand’s own endangered reptile the tuatarasmake a little cameo too. – Emma Rawson

Turtles All the Way Down is an intelligent and insightful YA story about an American teenage girl who suffers from OCD. The disorder’s control over her life is a continuous thread running throughout the book, alongside the main storyline which deals with the mysterious disappearance of a wealthy businessman. The book follows Aza’s and her BFF Daisy’s search for him in order to obtain the $100,000 reward. Part of this pursuit leads to the development of a relationship with an erstwhile friend, Davis, the son of the missing billionaire. The physicality of this relationship provides major challenges for Aza. The book has a satisfying, non-sentimental conclusion, and the book can be recommended to adults, as well as to young adults, with care – Janet Clarke

“Surprisingly good and funny, despite being a pretty bleak subject. I hadn’t read a John Green book before and was very reluctant to the success of The Fault in our Stars (thought train.. YA… commercial success = soppy story full of young people bumbling around using ‘like’ in every sentence… nah, not for me) What a surprise then to find  literate, amusing, sad, references to Yates poetry. An unexpected pleasure.”- Rosemarie White

LISTEN TO OUR OTHER PODCASTS

More stories you might like:
A life less ordinary in a 1978 Rolls-Royce Silver Shadow II
Discuss This Article