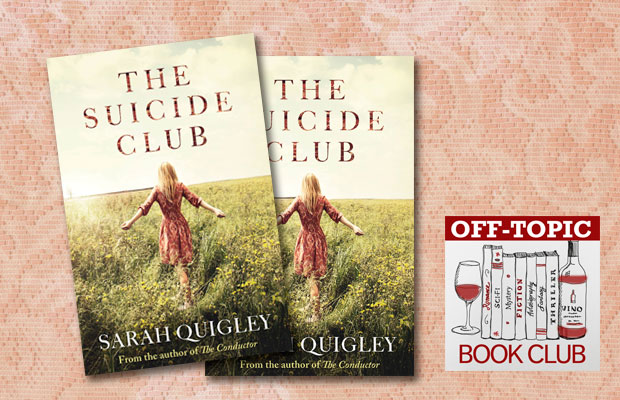 The Off-Topic Book Club have a lively discussion about Berlin-based New Zealand author Sarah Quigley‘s new novel The Suicide Club. While the book covers the subject of a group of teens grappling with depression, the book club found the book quite humorous in parts.

Hot topics in this podcast:

Some years ago I came home to my apartment in East Berlin to find a film crew outside my door. This wasn’t unusual: at that time there were often film shoots going on in my neighbourhood, for art-house movies or commercials or music videos. But when I looked up to see what they were filming, I saw a lone figure standing on the edge of the tall newspaper building behind my house, with outstretched arms, silhouetted against the clear evening sky. It was an arresting image and it stayed in my mind long afterwards; eventually it became one of the seeds that grew into The Suicide Club.

A friend of mine committed suicide a few years ago. His death was a huge loss to so many people: he was a lovable sociable man; an erudite, kind, funny person who told arresting stories about the past, and who loved wine and food, and classical music and jazz, and painting and literature. After the initial shock, I began to notice the varying reactions in our community to his death – and one of these was anger. Anger is a natural human response to suicide; it’s born of grief and fear and helplessness: Why didn’t he ask for help? Could we have stopped him? What was he feeling just before his death? Added to these mixed emotions are the complicated, conditioned responses connected to long-held and embedded religious and cultural beliefs. But condemnation is an absolutely pointless – and in fact reprehensible – reaction to a person’s decision to end their life.

I’ve come to believe that compassion is the only appropriate reaction to suicide. However close we are to another person, we’ll never know how it feels to be them; thus we have no way of knowing how much pain they may be in, or how one day or even an hour might come to feel intolerable. At the time of my friend’s death I was already working on The Suicide Club, but in trying to trace the path that led to his suicide I became more than ever convinced that we need to be thinking more, writing more and talking more about suicide. It’s as if it’s the last taboo subject in our society.

Only by discussing it openly, without resorting to condemnation or clichés, will we lose the fear and indignation that currently surrounds it. And only by losing the fear can we increase our ability to feel empathy, compassion and love – all vitally important for healthy societies. To me, The Suicide Club is not only about death. It’s also – and primarily – a novel about love. Love between friends, love for family, and the deep passionate heart-love one can sometimes experience for another individual. At the centre of the novel is a love triangle – as the three characters’ lives become intertwined, so do their hearts. Bright, Gibby and Lace are all unusually gifted, brilliant and beautiful; they’re also damaged by their pasts.

Through their characters I was able to explore the concept of ‘normality’, and the constrictions of that label. Seen through the lens of conventional society, these three twenty-year-olds would be judged as eccentric; but as we grow close to them and see the world in all its colour and wonderfulness through their eyes, the stifling notion of ‘normal’ is turned on its head. These are people who care very deeply not only for creativity and truth but also for the well-being of others. Their primary aim is to protect the people they love, and their primary motivation is an abiding compassion.

And this, I believe, is the only sort of ‘normal’ we should be aiming for; it offers the only truly humane way to live, and the only way to create societies that are not materialistic and empty, and won’t wither and die. With great love comes great loss. Writing this novel strengthened my belief that true love involves letting others go – selflessly and non-judgementally – when their suffering becomes too great for them to bear. An artist whose work I admire, Robert Montgomery, made a piece that stated ‘The people you love become ghosts inside of you and like this you keep them alive’.

This is the message I’d like to emerge from The Suicide Club: not so much the idea of love triumphing over death, but more the belief that love – real love – is large enough to enfold death and absorb it, and thus to grow even stronger rather than being diminished by it.

The Off-Topic Book Club is supported by Whitestone Cheese. Enjoy a seasonal selection of factory hand-cut cheese to your door every month or every two months by joining the Whitestone Cheese Club

Like what you hear, listen to our other podcasts here: