When you learn the best childhood lessons in a garage, and spend the ensuing decades tinkering with troublesome classics, you’re a bona fide car devotee.

In the boot of Chris White’s 1958 Morris 1000 there’s a first-aid kit with a big story to tell. “It’s an old New Zealand Army field dressing kit which has been tucked there since 1959 when my grandparents bought the car,” explains the Whanganui resident. “My grandfather was in Egypt during World War II and brought the dressing kit back with him.

He’d lived through the Depression and had been to war – he was frugal, resilient, practical and a great repairer and fixer,” says Chris.

Arthur White was a central force in his grandson’s life. So too was his workshop. “Dad often worked seven days a week and I relied heavily on my grandfather.” 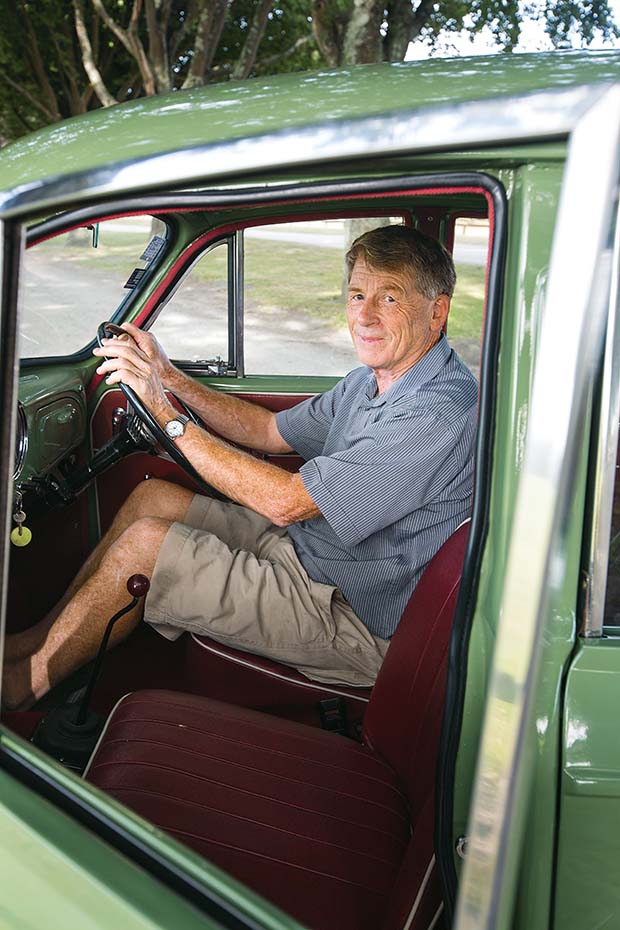 Chris congregated with mechanically-minded mates in Arthur’s cavernous garage after school and at weekends, and his boyhood zeal for engineering was fueled by his grandfather’s traditionalist approach to tools.

Those lengthy hours spent alongside Arthur have shaped him. “They were a gift. He taught me the old-fashioned skills – the simple life, where things are manmade and can be repaired.”

Chris learned to drive in his grandfather’s Morris. When he was 17 he boosted its brakes, swapped trafficators for indicators, added extra instrumentation and extended the gear lever. Later he rebored its engine. 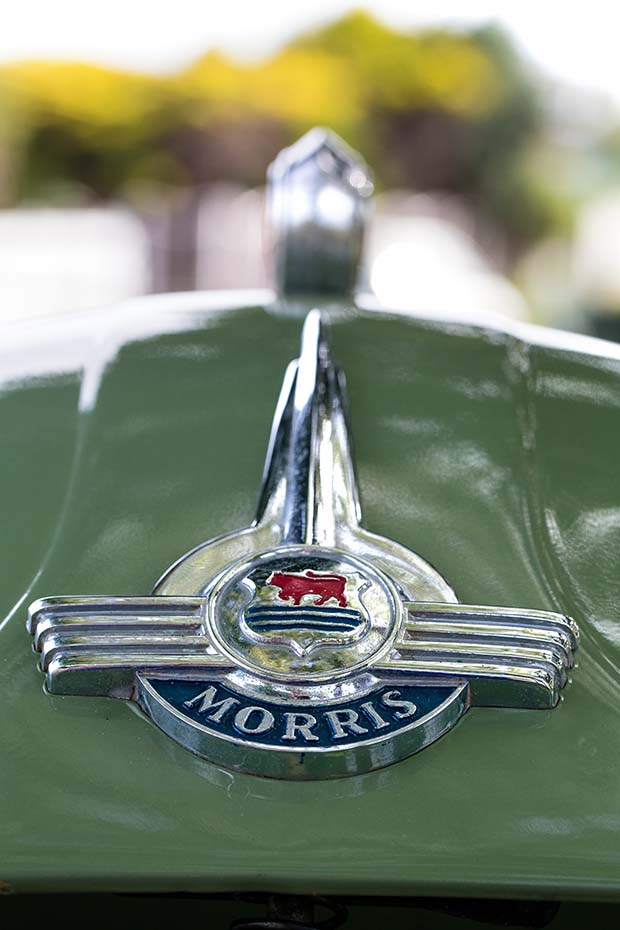 When Arthur died 40 years ago, the Morris passed to his daughter and her family. In a twist of fate 14 years ago it came Chris’ way. “I’d always said to my cousins, ‘If you ever get rid of it, I’ll buy it.’

I got a phone call.

The Morris was in a barn near Thames. Its gearbox was shot, the brakes were no good, the upholstery was torn but an old maintenance handbook I’d written in back in 1966 was still there. So was the first aid kit.” 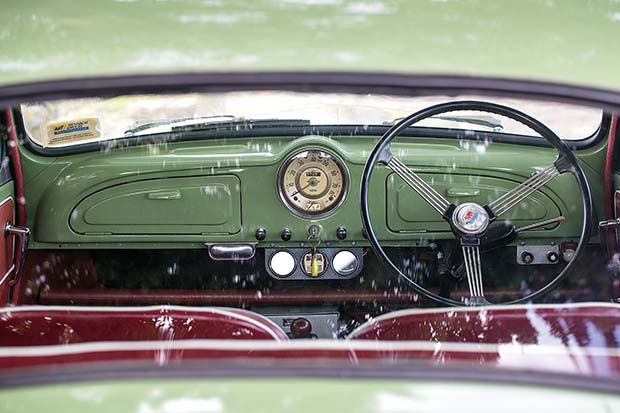 Five decades after Chris learned to drive the Morris, with his grandfather by his side, the car is in fine fettle. It has been fastidiously restored – every centimetre by Chris – and is greatly adored. “I like thinking I am sitting where my grandfather once sat. And of all he taught me.” Chris says the road performance of the Morrie’s 948cc engine may not be top of the pops – “It’s as slow as a wet weekend” – but ‘Arthur’, as he calls the car, embodies a far deeper meaningfulness than getting from A to B. 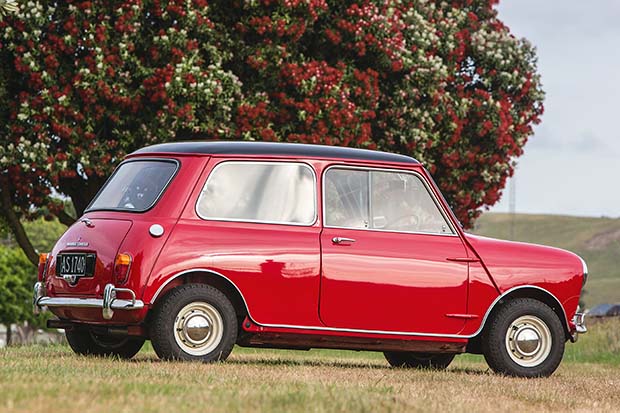 Chris White had been searching for 20 years. Then he spied it under a tarpaulin in a dark garage in Dunedin.
It was a genuine 1964 Mk 1 Mini Cooper S – but in a million pieces. “It was a body; the rest in boxes. It had been sold as a package to numerous owners who’d all had a pick at it. It was a risk.”

But Chris is by no means risk-averse.

He’d had a good shot at racing Mini 7s in his 30s, a decade of serious national formula classic car racing in his 40s and then a near-death experience.
“I had a cardiac arrest on the track in Hamilton in 1994 but stopped my Austin Healey in front of a paramedic. Sheer luck. They jump-started me with ambulance paddles. I lost three days, had a quick bypass and away I went again.”

Good luck on two counts – the heart and the Cooper S hunt. Only 12,200 of Chris’ model were ever made. “They are now very rare in New Zealand; many were scooped up and shipped back to the UK in the 1970s.” 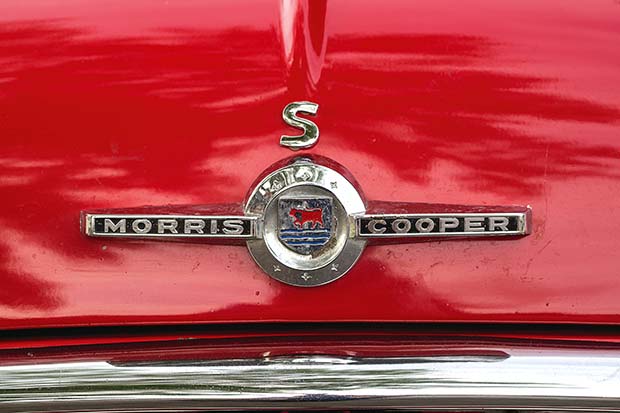 Having trailered his box of tricks back to Whanganui, he spread out the parts and held his breath. “A fair bit was missing, including the driver’s seat, but the main bones were there – the correct engine and gearbox.”

Rebooting his find as a road car was his aim and it took the best part of five years. No stone was left unturned. He even imported original-specification trim from a Suffolk-based auto upholsterer. Now the 1275cc package of Britishness has some fancy pistons with modified cylinder heads and a ramped-up camshaft.

It meets every smidgen of its owner’s 20-year dream. “I’ve had about 25 Minis over the years but the Cooper S was always so cool.”

A few years ago Chris and a good mate were asked to refrain from making handbrake turns in the restored Cooper S at a Mini gymkhana they were attending. He was unapologetic. “We just got a bit over-nostalgic,” he explains. 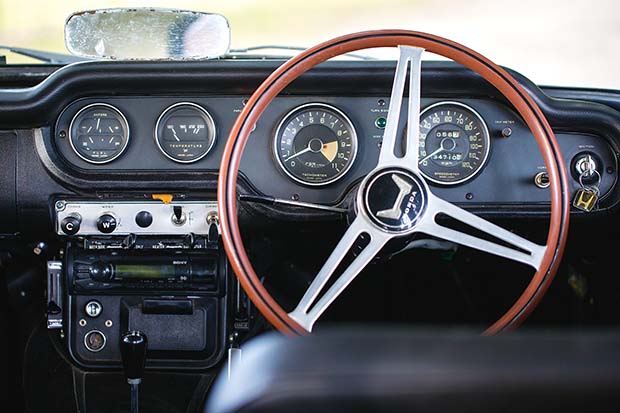 Two unregistered 1967 Honda S800s coupés, discovered in Nelson, and painstakingly restored over recent years, make one extraordinary whole. One was derelict, the other had hit a tree, and Chris bought them both. Which is how one became a donor for the other with parts from France and the UK thrown into the mix.

Chris says it wasn’t a budget build but it had been on the drawing board for many years.

“When I was 15, a classmate’s dad who was a car dealer, had a cutting-edge Honda S600 drophead on display and he took us for a ride one lunch time. He revved it like crazy and that was it. It was set in stone. I wanted one.”

But Chris’ initial foray flopped. In 1981 he restored a crumbling 1967 S800 coupé for racing but was turned away at the track. The Japanese-made car didn’t qualify as classic. The highly prized Honda went to a car museum while Chris switched to Austin Healeys. 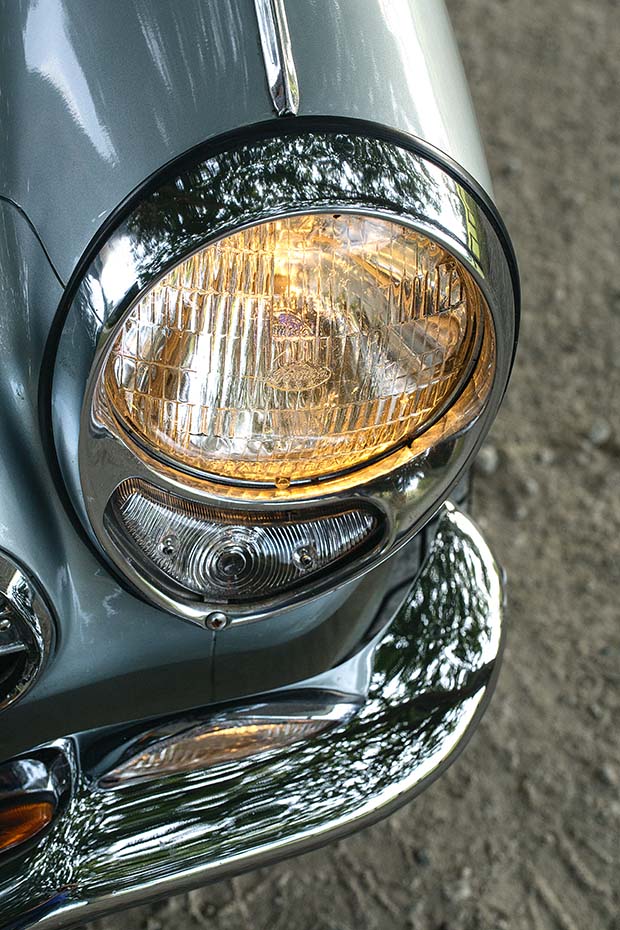 Life burgeoned: a growing family, a career in motor mechanics, car restorations, car repairs, car racing. Over the years the S800 coupé – as rare as hen’s teeth and super-advanced for the 1960s – was lodged in his mind. And now it’s in his garage.

“It’s a low-friction, free-revving car with a twin camshaft design and four carburettors, plenty of needle roller bearings and a highly tuned exhaust system – totally amazing for its time.” In size it equates to a three-quarter sized E-type Jaguar and Chris says it’s quirky, fun and a bit hairy to drive. “It’s small and sits so low to the ground that it tends to get shoved about a bit by the big boys on the road or just ignored.”

Chris may get the odd snub from truckies but, five decades after his S800 was released at the 1965 Tokyo Motor Show, it rates as an absolute cracker.