While teaching her kids about the plight of threatened kauri, Polly hopes to propagate passion for the environment that will last a lifetime.

The home-schooled kids thought it was play. Romping through the forest, they were gleeful when one of the dads stopped to climb a tree. Under his tuition, they too clambered high into the foliage to pluck kauri cones.

In actuality, a rescue operation was in progress as they collected seed from a stricken species. Phytophthora agathidicida is a terminal disease. In layperson’s terms, it’s a little like catching dreaded ebola, in that one of the symptoms is spontaneous haemorrhaging.

In kauri, it’s sap that bleeds, seeping through tree bark lesions. Infection by kauri-dieback, as it’s otherwise known, also results in rot and defoliation. You don’t always know a diseased tree when you see it but bleeding gum, yellowing leaves and a thinning canopy are indicators. Eventually, just a ghostly skeleton remains.

When the trees are hundreds or even thousands of years old, it’s particularly distressing to witness; not only because their deaths are happening under our watch but also because these ancient forest giants have come so far through the ages. In our increasingly disposable world, it’s rare to find something so enduring.

The two biggest kauri trees along our home ridge have been dated at between 800-1000 years old. Approaching them through the forest is like encountering colossal, grey, vertical whales. When the children ask me what time is, I’m tempted to do away with explanations of clocks and calendars and sit them at the foot of one of these massive beings instead.

‘Close your eyes and breathe slowly,’ I’ll instruct. Did you know trees have a heartbeat; a slow steady contraction/expansion that moves the sap through their veins?
This is life on a vaster scale.

Forget the hurried tick-tock rhythm to which humans scurry. Kauri-time is the measured spread of roots anchoring deep beneath a shifting surface of seasons. It’s the unhurried swell of rings opening out from the centre, while beyond, on a flickering grainy backdrop, civilisations rise and fall like outbreaks of fungi.

The thick leaf litter piled at their trunks is a collection of moments that grew and then died. Human lifetimes burn as long as candles. Clock hands whir in constant little circles but above these trees, the immense geometry of planets orbit round one another in their spheres. Primordial kauri speak somehow of this if you stop to listen. We scrubbed our footwear in bleach before we set off on our SOS exercise. Kauri dieback is a soil-borne disease. Wild pigs have been partly blamed for its spread, but scientists believe humans are more responsible. All over the upper North Island, kauri are sick or in danger.

Some 20-years ago a friend created a kauri sanctuary on his land, planting more than 1000 trees propagated from ancient kauri growing nearby.

James also has a kauri passion. So far he’s planted 56 but he wants to grow a forest of them too. For that he needs seedlings. Our remote valleys have so far escaped Phytophthora agathidicida infection. We hope that by learning to propagate seeds, we may create larger pockets where this ailing species can continue to survive. Our friend is a willing teacher. 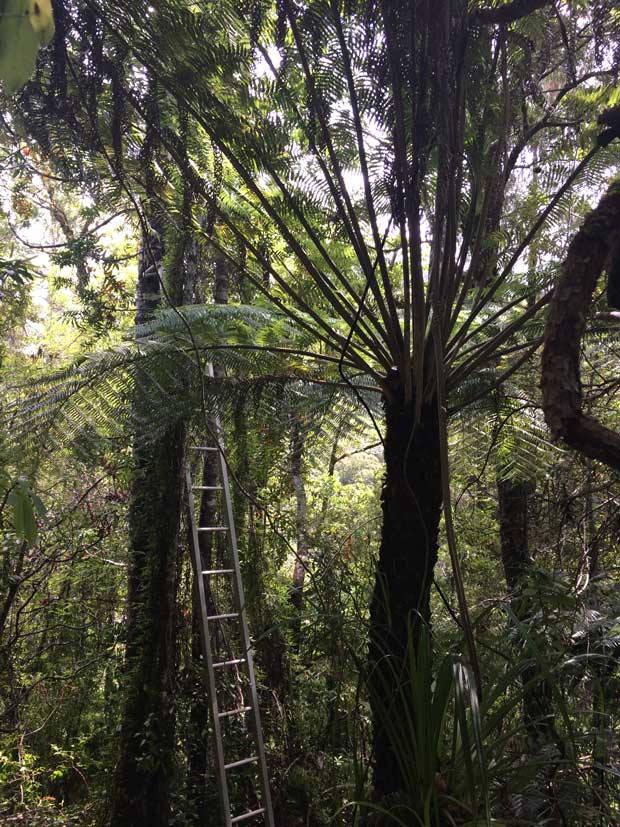 Now we’ve picked the kauri cones, we need them to open and release their seeds. The children’s following lesson will be one of germination and potting up. We’re hopeful sowing of another kind is also in process as these future kaitiaki or Earth-custodians are equipped with the skills and desire to regenerate our native forests.