Polly and the family take a spiritual journey to Cape Reinga.

We were headed to the end of the earth. In Maori culture, souls journeyed along waterways and coastlines to get there, but we’d bought the family car. Not only was it more convenient for us to follow State Highway One, but it ensured we’d be home by tea. The beach-going spirits were on a one-way trip. Unlike them, we still had homes to go to. Because despite sound-effects to the contrary as the children continued their cacophonous recovery from whooping cough, our family belonged to the land of the living.

The wilderness began abruptly. Almost as if crossing a line, the land suddenly emptied of human traces and the scrubby farms, lonely houses and fences were replaced by steep slopes blanketed by wind-sculpted scrub. 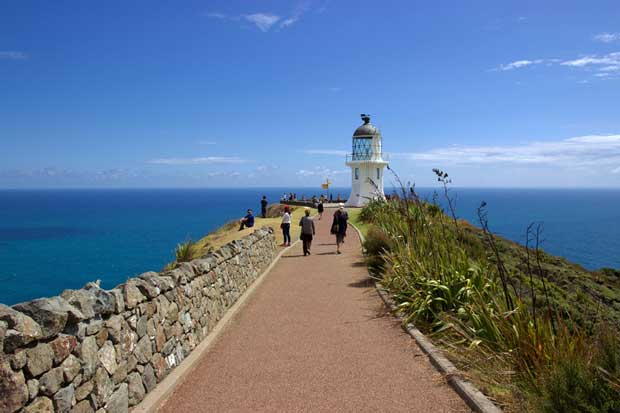 In the backseat, the kids stopped demanding how much further to go and wriggled upright. Something had shifted. There was potency to the hills; they had a presence.

On and on the road ran, flanked by scars of volcanic earth in vivid shades of scorched orange and red. Then there was the sea on both sides; the narrow tip of New Zealand edged on the left by the pounding Tasman, on the right by the singing Pacific. State Highway One reached the end of its entire 1452km length in the carpark and with nothing but water ahead; it did indeed feel like the end of the world.

Four-year-old Zendo had selected his footwear himself. In logic clear only to him, this meant two left gumboots – one his own, the other a hand-me-down several sizes too large. In order to keep on the latter, he developed a peculiar, wide-legged gait as he ran down the path to Cape Reinga’s lighthouse, dodging the steady procession of tourists puffing back up the hill.

Behind him, seven-year-old Vita minced along being ‘fancy’ in an ornate white satin, gold-embroidered Indian outfit acquired from an op shop. The skirt, worn almost to death, had split in half but this was seen as a plus, allowing for greater mobility. The dabs of pink lipstick on her eyebrows were designed to offset the matching jacket, and she nodded regally at the people she passed; a Lady patrolling her realm.

James had brought a jar of soil from home. By the time I made it down to the lighthouse, he was ceremoniously sprinkling handfuls from the viewing platform. The action was meant to create a symbolic link, but I suspect the tourists discreetly photographing him thought it was funeral ashes.

Of course, the kids wanted a turn. Vita, sensing the audience, flung hers with theatrical fanfare. Once the jar had been wrestled back off Zen, he pelted his handful down the cliff, supplying ‘biff-bam’ sound-effects while the two heaving oceans collided below.

It is here at the Cape, or Te Rerenga Wairua that Maori believe souls of the recently deceased depart Aotearoa on their journey back to the ancestral homeland of Hawaiki. While busloads of sightseers gather at the iconic lighthouse, the Maori goddess of the Underworld, Hinenui Te Po, waits below to guide wairua or spirits in through the portal. 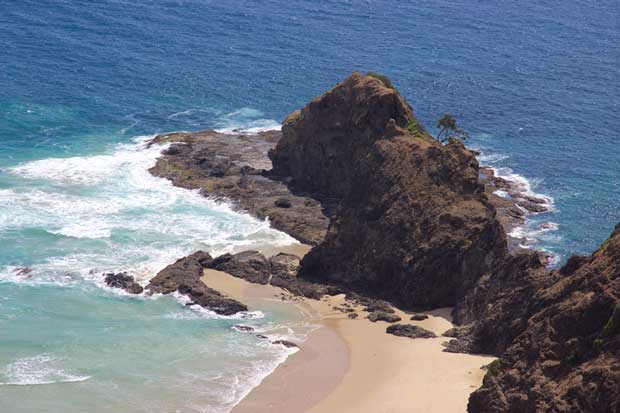 Looking back, you could just about see the spirits heading north, making their way up the distant, hazy beaches as plumes of sand and spray caught the wind. I wondered how it would feel to reach the sacred and ancient tree jutting from the rock below and know that this life on earth was at an end. Would you linger a while, caught in lonely beauty as the sea sucked and pulled at your feet, or would Hinenui Te Po urge you to let go and leap from what is no longer yours?

My mother, taking her time to read the placards about this spiritual place, joined us at the lighthouse with her visiting identical twin sister. Despite decades spent living apart, they’ve remained uncannily like carbon-copies; albeit one slightly wilder and woollier. To their wry amusement, these women have discovered they even share the same mirror-imaged aches and pains; a dicky left hip for one, a niggling right hip for the other.

Back up in the car-park, another bus pulled in, disgorging its load of tourists. They looked soft and well-fed, dressed in sensible footwear and steam-pressed neutral tones. Some of them seemed bewildered, rotating on the asphalt as if trying to anchor themselves. We stared openly at one another. We weren’t so very different. All of us were just passing through; places, people, lives. And every single one of us would again reach the end of the world some day; travellers are departing for whatever comes next.