Polly and co return to the rumpty caravan (and former tiny home), this time to test out their DIY fireplace.

Our midwinter getaway didn’t take long to reach. In fact, four-year-old Zendo, racing downhill on a shortcut, beat the family car to our overnight destination.

The Rumpty Caravan, once our tiny home, is now our guest-space and forest retreat. We’d come to test-drive the newly installed fireplace. However endearing a caravan seems in summer; in colder seasons they could be marketed as refrigerators on wheels.

During our first winter on the land, plummeting night-time temperatures used to drive James and I into bed not long after sundown. Weighted under piles of blankets pulled up to our frozen noses, we’d pass long dark evenings playing morale-boosting games about ways in which our lives could be worse. 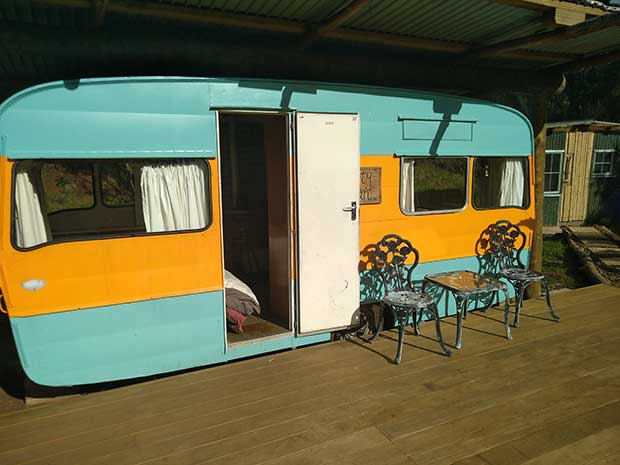 Now, however, smoke puffed merrily from the caravan’s chimney within minutes of our entry and despite the sou’wester blasting up from Antarctica, we were soon stripped to t-shirts as we settled in for a balmy night.

The wood-burner crackled and hissed as James and I devotedly fed it logs. The heated kettle whistled while we admired the stove’s efficiency. Outside, rain rattled like bullets but we were invincible to wintry attacks.

Then James heard of someone cunningly recycling 9kg LPG cylinders. Cutting and welding, he was fashioning functional little wood-burners for tiny spaces. Cute as a metal baby, our one was lovingly delivered home where we cooed over its cleverness and set to work preparing, if not a nursery, a space at least for it to triumph. After some debate, we opted to sacrifice the caravan’s indoor sink. 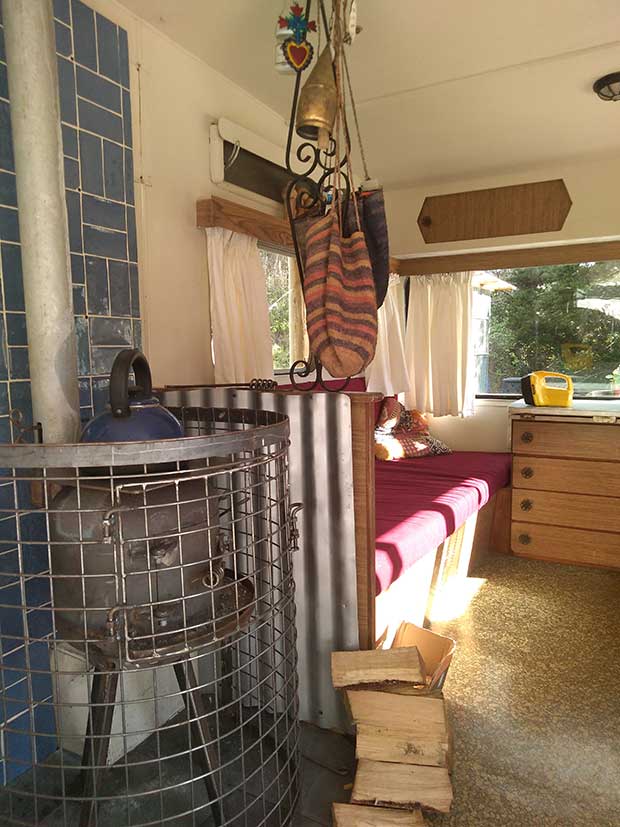 It was every four-year-old boy’s dream. After numerous unsanctioned destructive escapades that have ended with rebukes, Zendo’s eyes grew wider and wider as James explained the job at hand and the awe-inspiring concept of legitimate demolition. Armed with a club hammer, our son was given licence to bash old cabinetry out.

“That was the best day ever,” he announced at the end of his labours. Alarmed by the gleam in his eyes, I hurriedly removed his tool while he surveyed our house with refurbishment-lust.

There’s something tremendously satisfying about successful DIY projects. After lining and tiling the new cavity for the burner, James and I high-fived one another on the caravan roof as the flu and chimney slotted exactly where they were meant to.

“Imagine if we’d had this set-up when we started.”

My former self sighed wistfully as I surveyed how cosy the caravan has become. When we used to live there, tarpaulins lashed between bamboo poles formed the caravan’s porch, under which we operated the outdoor kitchen.

Battling to keep ingredients from blowing off the chopping board, James and I also developed an uncanny sixth sense for knowing exactly when to prod pools of rainwater from the sagging roof before it collapsed.

Now a proper tin roof protects the caravan. A large wooden deck has replaced the dirt and the outdoor kitchen sports proper bench space, a sink with running water and decent shelter from wind and rain. A spacious and private outhouse has succeeded the toilet bucket where we once perched beneath a tree, exposed and alert for any sounds of unexpected guests. 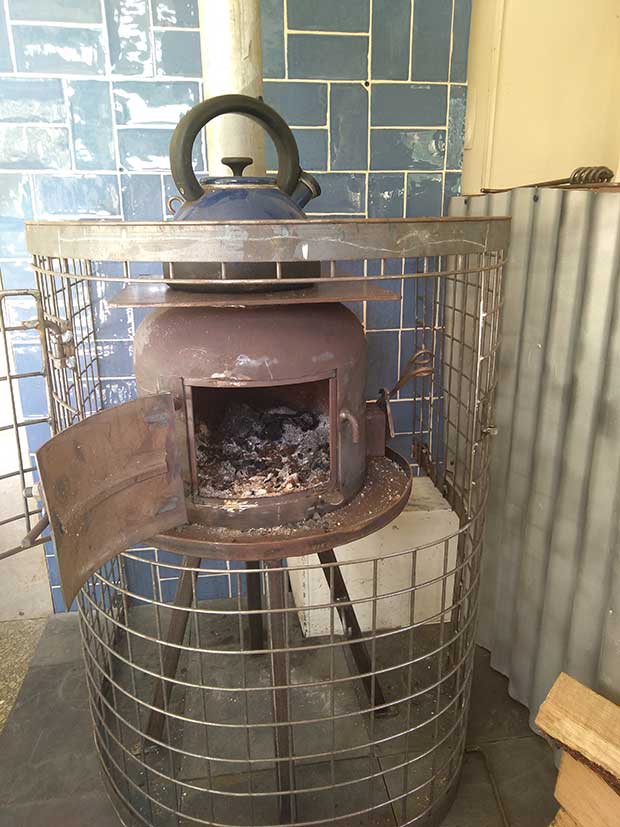 As well as testing the new fireplace, the winter getaway was a chance to have Family Fun. I should have known better than to call it this. The children bickered over who would sleep where. They screeched theatrically when a spider strolled over a curtain, and then seemed unable to bring down the volume.

Running outside barefoot, they trampled in mud. After squashing slices of cake into balls, they drew pictures over the steamed-up windows with greasy fingers and argued some more about who slept on what side of the caravan.

One of them cheated at Snakes and Ladders; the other was morally outraged. Violence followed – pinches and pummels, shrieks and squeals. Adult nerves rasped as if a cheese-grater was scraping at them. Interventions were staged.

After stoking the fire one last time, James muttered ‘goodnight’ and slipped away into the night; heading home to our bed for peace.

“But we’re having a night of Family Fun,” I protested feebly.

“Mmmm,” he said dubiously over his shoulder, disappearing into darkness.

The children wanted to sleep together, pressed along the same bench seat. One banged their head on the table. We were hot as the little wood-burner smouldered. Sleeping bags slid off. Night noises needed investigating. The light flashed on and off so often, it looked like we were sending morse-code out through the forest. Finally, the kids went still.

At 1 am, the starlight was dazzling; sparkling like crystals of ice in the freezing night sky. Kiwis called. Not the resident kiwis near our house, but a different pair; he whistling melodically while she coughed like a cat dislodging a fur-ball.

At 2 am, seven-year-old Vita slipped into my bed. At 4 am Zendo joined us. At 7 am, the caravan door opened to James. He relit the fire while I lay, bookended by snuggling little bodies.

The caravan warmed up magnificently. Idling in the heat, we ate cake in our pyjamas, sang songs from bed and played a few rounds of memory-cards across the duvet. It had been scheduled for the night before, but finally, spontaneously, we had our Family Fun.

“I could live here,” James said as the kettle whistled from the fire.

“Me too.” I fondly remembered how little housework was required to keep the caravan clean.

“Only let’s wait till the kids have left home,” we agreed as the caravan shook with their fun.