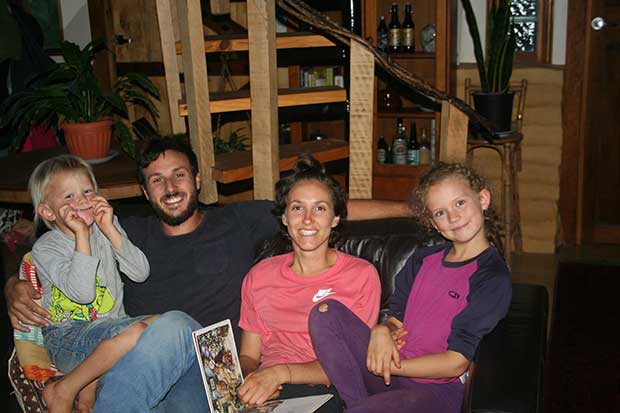 Helpxers Robin and Melissa with the kids.

Polly makes an uncomfortable personal discovery when she enlists the help of voluntary workers from overseas.

In the fantasy where James and I are exceedingly wealthy, we employ a full-time staff of seven.

There’s the cook, the maid, the gardener and his/her apprentice, two labourers and a fun-loving nanny who whisks the children off for bushwalks and other wholesome activities for several hours each day.

The labourers are the most stimulating part of the daydream; not because of Lady Chatterley-type inclinations but due to their marvelous abilities to follow orders and swiftly bring good ideas to fruition.

Did someone mention they’d like a natural swimming pool dug alongside the stream? Consider it done ma’am.

The children’s bedrooms we’re yet to build? Working on it now sir. In the happy hallucination, projects like my writing studio and library; James’s work-shed; the herb courtyard; the fencing required to keep wild pigs from future nut orchards and our impending homemade sauna, rise like mushrooms under the cheerful industry of our trusty workers.

This team likes mud-bricking. They love digging foundations. They positively clamour to be allowed at the chainsaw during firewood season.
Returning to reality, James and I smile bravely over cups of home-grown chamomile tea and inspect how many pages our ‘List of Things To Do’ now runs to.

‘We would have made good 19th Century Landed Gentry,’ we agree wistfully, as the fantasy disintegrates yet again. Think Mr Darcy from Pride and Prejudice. What we could do on our land with a workforce and budget like his! Instead of selecting from employment applications, we skim through Helpx requests. This international exchange programme unites voluntary workers with projects and board. As with hired help, it can be a hit-and-miss affair.

I’m thinking of the Japanese woman and her French girlfriend who hid up a tree for half a day when asked to weed the vegetable beds; the Spanish woman who imperiously ordered us to drive an hour so she could interview us about our suitability before she committed, and the Australian woman who used a week’s supply of food to create an enormous but sorrowfully unspectacular soup.

Lately, however, Fortuna’s wheel has been rolling nothing but quality our way.

Admittedly Klaus and Maria had an unsmiling appetite for austerity; cycling determinedly up our goat-track on a tandem bicycle and opting for their thin narrow sleeping mat over a real mattress during their stay, but they worked hard on the construction of our new deck, ate heartily and asked for little.

Ferran from Spain entered our lives as gently as soft summer rain. He was a seeker; a quiet philosopher, hunting truth with piercing questions and shyly sharing his insights on candle-lit evenings. He played imaginary games with the children for hours; put his long slender pianist hands to excellent work during the overhaul of our caravan and etched his way into our hearts with his thirst for authenticity and meaning.

Melissa and Robin came next.

They’d been four years on the road when they reached us, traveling the world as they studied sustainable lifestyles. Their admiration for just about everything on our land radiated with sun-like intensity and gifted us renewed enthusiasm for the life we have chosen. 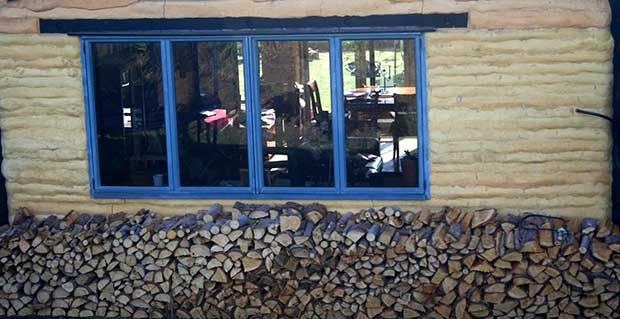 Some of 2020’s firewood (said with a certain degree of smugness…).

They greeted each day’s tasks with a joyfulness usually reserved for lottery winners.

‘Plant the garlic beds in lupins for green manure? But of course.’

‘Fell trees to chop for next year’s firewood? There’s nothing we’d like to like to learn more.’

‘Transplant native seedlings from the forest floor to a grassy bank? We’d be honoured…’

No job was beneath them and after their seven-week stay, 2020’s winter firewood lay stacked beneath the eaves, our caravan site sported a new banana plantation fed by a grey-water scheme, fresh concrete had been poured, an outdoor kitchen bench was built, gardens were weeded; paths laid and a dozen other tasks had been ticked from the list.

Indoors they learned to make bread; cooked meals, did dishes, entered into the children’s games, shared their music, movies and ideas. They were the most ethical visitors we’ve ever received; traveling by train and ship wherever possible to avoid the colossal carbon footprint that flying creates.

Disgusted by the machinations of the banking world, they tried to stay outside its financial realms. Disillusioned by the questionable investments of insurance companies, they journeyed without travel insurance, preferring to maintain their well-being through conscious eating and living instead.

In short, they made a tremendous contribution to our homestead and yet, as the weeks rolled by, I made an increasingly uncomfortable discovery. I am someone who needs time alone the way plants need to drink. Just as James flourished each evening in the fast flow of conversation, I retreated, bit-by-bit.

I knew I tended towards introversion but the longer Robin and Melissa stayed, the more I craved some distant mountain peak with a cave where I could sit and recharge. Alone. Communal living is hard. I live amid remote forest for a reason. Yet I missed Robin and Melissa as soon as they left. We all did.

Three lots of Easter/Anzac guests arrived hot on the heels of their departure. It is always lovely having friends to stay but today’s the first day in eight weeks that the house is just ours once again and every space seems to have suddenly expanded.

We wouldn’t get this quality of silence if we were managing our fantasy workforce of seven. I suspect the maid’s constant presence would get on my nerves before long.

Besides, engaging Helpxers instead of staff has brought us wealth in other ways, with a network of international friendships swelling the ledgers in our hearts.