One of the loveliest things about a period of paucity is the volume of pleasure flooding in when it ends. Back when James and I occupied an urban world, I never once gave thanks for our hot water taps. Then we shifted into the bush and lived without one for six-and-a-half years. We went without a lot of other things too, actually, and it wasn’t so bad, but this past winter our family made another great leap up the ladder of domestic evolution by simultaneously acquiring a lounge, a wetback wood stove and a hot water tap for the kitchen.

In the grand scheme of things, having to boil a kettle whenever dishes need washing is a trifling annoyance, but now that it’s here, the tap’s liquid heat brings such joy, I believe it’ll last me the rest of my life. I hope so. Living off-grid has brought gratitude for many amenities as we slowly obtain them, and it’s an enriching reaction. 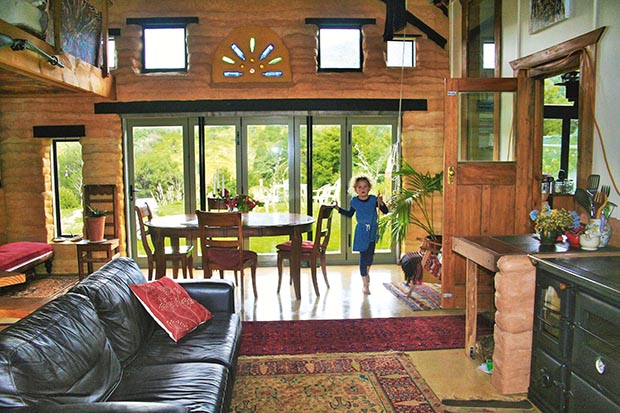 The hot tap’s functionality wasn’t easily gained. Otto, the plumber who came to connect the wetback, is the sort of immigrant who knows about not taking life for granted. Growing up in East Germany before the Berlin Wall fell, he suffered horrific betrayals, hardships, family separations, Stasi threats and enforced wearing of lederhosen under the oppressive regime. Now he’s established in New Zealand, he appears to exist in a state of permanent jubilation as he marvels at all he has. “Life is good,” is his stock phrase, enforced by a nodding grin.  Sadly, however, he couldn’t say similarly of our hot water situation.

It was the pressure, he explained. If we raised our header tank 10 metres up the hill, it would double the volume of flow. “Then you’ll be in hot water.”

The threat in his words was lost beneath our excitement. The problem with raising the header tank, we realized, was it became too high to be fed from the creek. To regain the necessary altitude for a gravity line, we had to go deeper into the forest.

“In the city, there are just big pipes you connect to,” I told the children wistfully as James clambered upstream with 500 metres of hose on his shoulder. Once water was restored, it gushed from the tap in a roaring torrent that saw us whooping with DIY satisfaction until we discovered the force was so intense, it was also fountaining from the overflow pipe of our hot water cylinder.

James rang Otto who airily advised us to tinker with the valve. Nothing changed. “It’ll be the valve,” our long-distance plumber friend affirmed. We toyed irritably with its knob.

Days grew cold, but we couldn’t light the fire until the fountain stopped and the wetback was working correctly. Otto promised he’d come soon, but first he had to press his olives. The community press had been booked months ago. “In the meantime, lengthen the overflow pipe,” he instructed.

A steady dripping rewarded James’s efforts. Amateur plumbers emerged in the guise of neighbours and friends. “It’s definitely your valve,” they asserted, unaware how offensive the word had become as we twiddled futilely with the spanner.

The problem with living remotely in the bush is that tradespeople aren’t easy to entice. Most lack the 4WD vehicles required for access, and some have quoted a $300 travel fee just to reach us. We’d considered ourselves lucky to enlist Otto but when he rang with the news that he’d ordered more valves and was coming next week to install them, our confidence waned. Not only had valve-fiddling begun to sound like a perversion, but surely not every plumbing conundrum was solved by the addition of an extra one?

“Life is good,” Otto nodded as he set the last regulator in place. We held our breath. A moment later, the overflow pipe began its fountain. In his darkest hour, James saw the light. “Could water be pushing backwards through the shower califont and up into the cylinder?”

It was, and after fitting another valve to control it, Otto was on his way, finally leaving us in the sort of hot water we’d been waiting for.