This week Polly learns that rabbits can climb fences and enjoys her quiet summer mornings – thanks to the ducks.

It’s the season of giving and much to my consternation our ducks are leading the charge. Proving that one should be careful what one asks for, our yellow-billed Pekins have been working hard to gift me my desire for more hours in each day.

They’ve been at it for the last six weeks; gathering under our bedroom window at 5am to honk in festive chorus and rouse me from my warm nest of bed. Like an unstoppable alarm clock they pierce my sleep; turning up the volume until it sounds as if they’re holding megaphones to their beaks. Dreams of boisterous women roaring with head-tipped-back laughter morph into the reality of vigorous quacking as I blearily open my eyes. Desperate to keep the children sleeping, I made the initial mistake of leading the ducks away from the house for a feed of morning maize.
Now they expect it. Worse, they know what to do to get it.

In my daily rush to hush them I exit the house in my headlamp, hissing with whispered hatred while they fall into a honking line running behind. As the maize pours, their sudden guzzling silence sees me sighing with relief and silent prayer. Please don’t let the children have woken.

At 5.30am, the world is solidifying and slowly regaining its colour; sung back from night shadows by an invisible dawn chorus calling from silhouetted trees. A spreading stain of light seeps up the eastern sky. Sometimes a kiwi whistle rings from the gully. The dew-damp land smells sweetly of seeded grass and surrounding forest gently exhaling. If I were a dancer, I’d stand on one leg and slowly raise the other to point at the morning star. It’s that kind of beauty. These early summer mornings are mine. That’s the ducks’ gift and if I was slow to cotton on, it’s because sleep deprivation can sometimes befuddle a mind. As I stand in lifting darkness, our two escaped rabbits lollop over for petting, glowing whiteley like furry phantoms. Everyday I scoop them up and deposit them back in their cage. Who knew bunnies could scale chicken wire fencing? Soon their assault on the herb beds will permanently end as we roof their run, but not now; not in the precious alone time of dawn.
In solitude, I reach for my laptop. If we have guests sleeping in the other room, I write in the car. Location doesn’t matter. What’s important is the silence. Journeys are made step by step. Books are written word by word. I’m kind to myself at my slowness.
One of our ducks is mentally deficient; a few feathers short, so to speak. The children have named her Darling. I call her Honk. Some mornings, after their breakfast, when the other ducks have waddled off to nests or embarked upon foraging expeditions under the sunrise, Honk returns to the lawn and resumes her deafening quacks. Even she doesn’t know what she wants. In desperation I chase her, frantically flapping my arms and seething with worried rage. 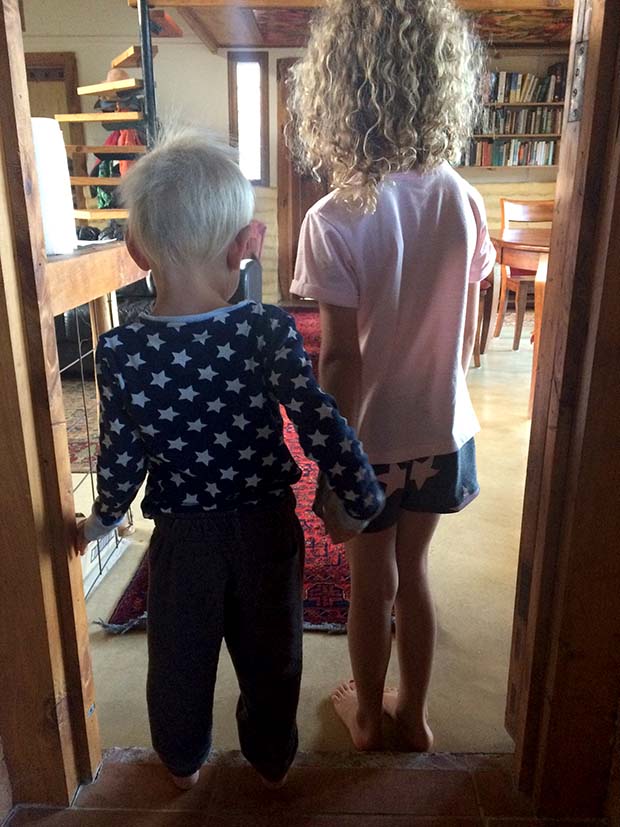 Please let the children stay sleeping.
Morning silence is fiercely guarded.
Now that James is no longer bothered by dawn ducks, his own hatred has subsided.
So far he’s eaten three but; ‘Let’s see if they stop the bronze beetle,’ he says smoothly when I suggest duck reappears on his menu. Every January a plague of bronze beetles whirs from the forest at dusk to defoliate our orchard. This will be the ducks’ last opportunity to redeem themselves.
Whenever the pyjama-clad children appear, it’s always too soon. They arrive in my morning hand-in-hand, launching across the lounge to land at my sides. If I’m in the car, they climb into the backseat.
‘No talking,’ I remind them after our greetings, but it’s like ordering a tree not to grow, or the breeze to be still. Vita is penning a book of her own and needs to know spellings. Three-year-old Zen removes his bedclothes and dons roller skates to clunk about the place naked.
Resistance is futile. Writing must stop for the day.
When sunshine arrives, it’s as soft and warm as ducklings’ golden down.
The lawn is scattered with detritus; shoes, deck chairs and mud-pies on plates. Togs and towels hang like flags on the clothesline. We have grown complacent – expecting summer to last the season now a succession of sun-baked days has turned our valley into shimmering mirages of stifling afternoon heat.
Solstice celebrations are about to begin. This year we’re making a totem pole to mark the sun’s farther-most setting point on the south-west horizon. There’s poignancy to midsummer festivities. Summer’s glory may yet stretch for months but the longest day marks the start of the turning tide; the incoming trickle of winter darkness.
None of this matters a jot to children and ducks who exist so completely in the moment. In the season of giving, their presence is their present. Winter to them is as remote as Narnia; as inconceivable as foie gras.