Raising the bar: behind the scenes at the NZ Chocolate Awards


Being a chocolate judge would be many children’s dream. thisNZlife goes behind the scenes at the NZ Chocolate Awards to discover how to taste chocolate like a pro.

Eating chocolate was serious business at the NZ Chocolate Awards. New Zealand’s top food writers and artisan chocolate-makers gathered at the Fresh Factory in Auckland this week to sample chocolates from across New Zealand in search for the country’s best blocks. Chocolate experts, all 18 of them, were divided into groups to judge 23 different categories of chocolate including Best Dark Chocolate Bar, Best Milk Chocolate Bar, Best Filled Chocolate (including Bonbons) and Best Bark or Brittle.

The chocolate was tasted blind, with all distinguishing wrappers removed. The judges gave each chocolate a score, cleansing their palate between tastings with sparkling water and slices of apple.

“You look for a good texture and shine, which means the chocolatier has done their job properly,” said the co-head judge Nicolas Bonnaud, head chocolatier, and owner of Honest Chocolat in Snells Beach.

“The key to tasting chocolate is to savour it. It’s very much like tasting wine – when you let the chocolate melt in your mouth, the smell comes back through your nose.”

NZ Life & Leisure is the sponsor of the ‘Best Bean to Bar NZ-Made’ category – this chocolate is made in the maker’s own factory starting from the whole cocoa bean. 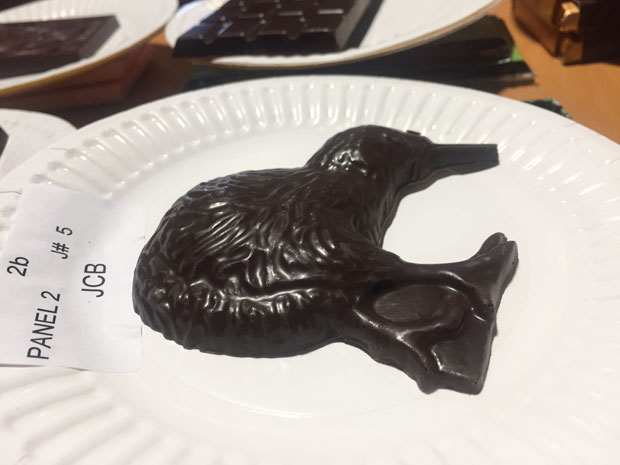 Food editor Anna Tait-Jamieson said the awards are a great opportunity to recognise Aotearoa’s growing artisan chocolate industry. “New Zealanders want to know where their food is sourced from, hence the rise in demand for bean to bar chocolate.

More stories you might like:
How to grow the alien-looking babaco (or champagne fruit) in New Zealand

“A few years ago there was one bean to bar chocolate maker, and that was Whittakers, and now there are several. I like to see chocolate made from cacao grown in Samoa, the Solomons Islands and places close to home and also the use of New Zealand flavours such as Marlborough sea salt.

The Breeze radio host Alison Leonard was a guest judge. The former Dancing with the Stars judge and foodie enjoyed sampling the chocolate and learning from the confectionary industry experts.

“When I hung up my dancing shoes, I became a real foodie, and I love learning anything new so being here with people that do this for a living is really nice.” The winners of the NZ Chocolate Awards will be announced on Friday, September 15 and will be showcased at the Chocolate and Coffee Show on Saturday and Sunday, September 23 and 24 at The Cloud in Auckland.