Rangitīkei: Rivers, estuaries and a pretty coastline are begging to be explored On the Rangitīkei stretch of SH1— from the Manawatū and southwest to Horowhenua’s Foxton — rivers, lakes, wetlands and beaches create a vibrant ecosystem well worth a visit.

Water is the defining element along the southern section of SH1. The whenua, whether the hills of white clay (papa), cleaved and crumpled by the Rangitīkei River, or the productive flats near Himatangi, is home to a string of small settlements proud of their history and keen to entertain passers-by.

With numerous bric-a-brac stores along the way, leaving space in the car for treasures is strongly advised — as is making time to stop if there are young travelers onboard. There are many opportunities to let off pent-up steam and, if food is required, Horowhenua’s market garden stalls are the go.

There’s a long list of enticements to tempt travelers to set a course for this unsung part of the country, or at the very least to take time to explore what’s happening just a mere block back from the highway. But top of anyone’s list should be getting out on the water.

The Rangitīkei flows through magnificent and varied terrain 185 kilometres from its headwaters in the Kaimanawa Ranges to join the Tasman Sea, southwest of Bulls. Yet, from SH1, it’s not easy to get more than a glimpse of it, though enormous white clay (papa) cliffs, impressive and visible to the east of the main highway, hint at a river below.

Rivers offer the traveler many solaces; fish to catch, banks to picnic on, willow trees to lie under, views to focus on, and tunes with which to harmonize. This gentle but dramatic river demands to be ridden. Paul Eames’ family pioneered river rafting in the area in 1981, believing that while the Whanganui River was getting most rafting attention, the Rangitīkei should receive its due. At various stages, the Eames ran their rafting operation Awastone from the famous Mangaweka DC3, a plane they transported to its current spot in 1986 (now closed). Paul and his wife Tricia took over the family business in 1998 and currently operate from beside the river, precisely where a rafting company should be.

The section by Awastone is grade 2, safe for families and novices to drift along through gorges and canyons (yes, it featured in The Lord of the Rings) with plenty of time allowed for lunch and a swim.

There’s a one-hour “splash and giggle” family trip, full-day scenic outings for the mellow explorer, and lunch among the magical Whitecliffs Boulders, as well as options for the more daring. 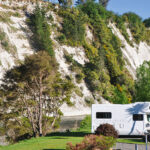 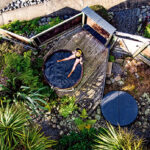 Awastone is open year-round (although the café closes for part of the winter), with a hot tub ready to warm up winter rafters. Tricia and Paul constantly add “a bit of this and that” to Awastone and aim to provide a relaxed experience beside the river they love.

Tricia believes the Rangitīkei’s appeal is partly that not many people have experienced it. “It’s not as easy to access as the Whanganui or the Shotover, but it offers so much beauty and diversity in flora and fauna and levels of adventure.” 143 Ruahine Road, Mangaweka. (06) 382 5744, mangaweka.co.nz

THE MANAWATŪ RIVER AND ESTUARY

It’s impossible to overstate the connection between the Manawatū River and the region that bears its name. Alarmed at the water’s degradation, the Manawatū River Leaders’ Forum was formed in August 2010 to restore the river as “a source of regional pride and mana”. Notable efforts have improved water quality and the reconnection of whenua to the awa (river).

One of the most visible initiatives is the Tū Te Manawa project, erecting eight whare mātauranga (educational kiosks) to explain the area’s cultural and historical importance. Besides creating beautiful spots to gather and picnic, the project also aims to promote citizen science and increase the appreciation of coming generations for the Manawatū. The Manawatū Estuary is considered one of the most important wetlands globally, home to 23 threatened species: 13 bird, six fish, and four plant. It has Ramsar status (named for the Iranian town where the Convention on Wetlands was signed in 1971), which gives it protection as a wetland of international significance.

More than 200 hectares in size, the estuary is a refuge for nearly 100 species of birds — making it one of the country’s most diverse. It’s also vitally important to migratory native fish, who must go to sea to breed.

Any time of year is good for birdwatching. In summer, look for godwits, knots, terns, golden plovers, and in winter, hunker down to spot royal spoonbills, wrybills and banded dotterels (to name but a few). 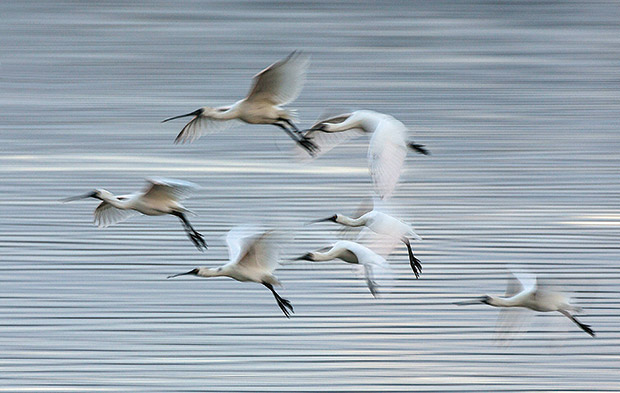 Park at the southern point of Holben Parade and walk towards the estuary and the small birdwatching shelter. The walkways extend either left or right: the right turn goes upriver towards the Manawatū Marine Boating Club while turning left extends down towards the river mouth and beach. Walk along the coast, come up at the surf club, and loop back to Holben Parade. Allow about an hour.

The Manawatū Estuary Trust holds an annual welcome and farewell to the migrating birds. These public events are held close to the equinox each March and October. See the events page at metrust.org.nz

The Manawatū River carves a 180 kilometre-long channel on its way southwest through the province, finally arriving at the Tasman Sea, just south of Foxton Beach village.

The water provides a surprising number of fishing opportunities for both freshwater and saltwater from the river’s source up in the Ruahine Ranges right down to its saltwater estuary. It also offers some respite from the prevailing northwesterly winds that batter the coastline.

Freshwater: The river and its many tributaries are plenty full of fish angling to be caught with various fishing methods, including wet and dry flies, nymphs and spinning. 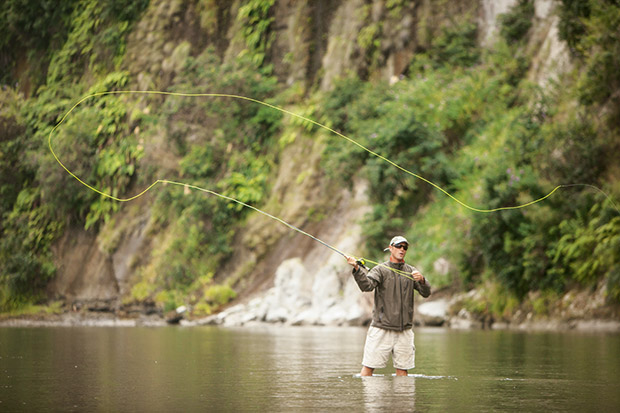 The members of the Horowhenua Freshwater Anglers’ Club in Levin are a friendly lot, welcoming newcomers and happy to share local knowledge and offer tuition. The club has a riverside hut where members can stay overnight for an early start. Local catches of rainbow and brown trout have been in the 1.8- to 2.7-kilogramme range.

By Boat: Foxton Wharf, on the Manawatū River, is a 30-minute drive from Palmerston North and has a safe launching ramp and a secure car park for vehicles and trailers. When accessing the sea via the river, boaties need to cross the Foxton Bar, so the usual bar-crossing rules apply: wear a life jacket, take a marine radio, plan to travel the bar at high tide and in a calm sea, and return on a high tide. 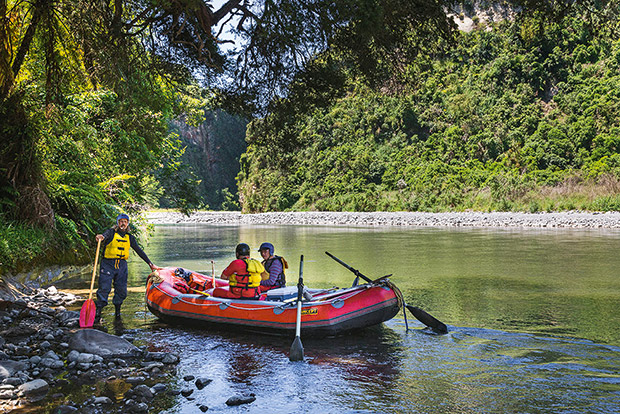 Take advice from the coast guard at the Manawatū Marine Boating Club (mmbc.org.nz). Once at sea, there is a mix of species to catch — kahawai, snapper and gurnard — using many forms of fishing such as stray lining, dropping a rig of choice to the ocean floor. Salted kahawai and squid are good bait.

Coastal: Locals suggest fishing at Foxton Wharf on the estuary of the Manawatū River to avoid the wind along the coast. The best time to fish from the wharf is half an hour either side of high tide. As the tide floods into the estuary, it brings a variety of hungry species, including kahawai, yellow-eye mullet, spottys, piper, herrings and, in summer, even the odd kingfish.

Surfcasting from both Tangimoana and Waitārere beaches will provide a decent feed of fish, such as snapper, kahawai and possibly gurnard. Driving on Waitārere Beach is possible as the sand is quite firm but keep to the other vehicle tracks and enter at the main entrance. At Tangimoana, the sand is soft, so only drive on the beach in a 4WD. 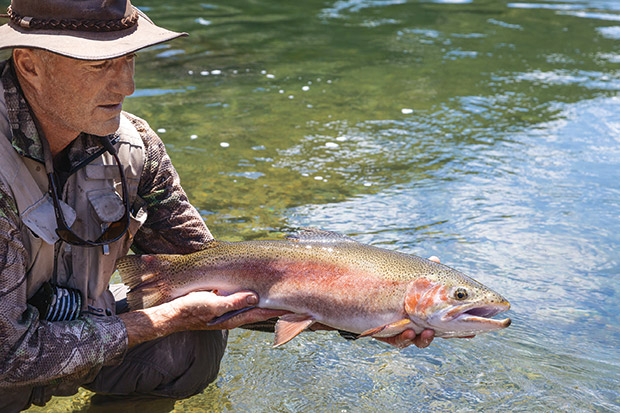 When surfcasting, avoid rips, follow the seagulls and cast where they are circling; fish in offshore or wind-free conditions. A good tip is to fish at low tide, when fishers are more likely to reach the drop-offs further out, which hold the bigger fish. Bonito is a favourite bait, but squid, pilchard and salted jack mackerel will also do the trick.

Getting sand between the toes is almost unavoidable in this part of the country. It’s unforgivable not to walk on the beach, with a good 20 kilometres of coast to choose from — from Hōkio Beach in the south to Himatangi Beach in the north. (At the very least, enjoy one of the coast’s famous sunsets.) 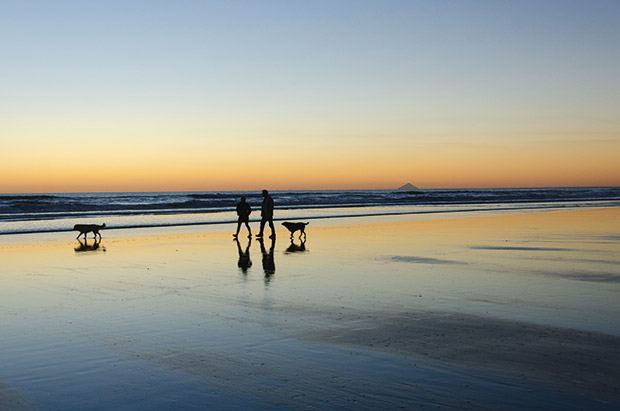 The length of a beach stroll is restricted only by time — or one’s wading capacities — but a highly recommended walk is between Foxton and Himatangi Beaches. The trek is 10 kilometres one way, so commit to walking the equivalent of a half-marathon (there and back). Or arrange a pick-up (followed by an ice cream from the Himatangi Beach Store at 2 Hūnia Terrace or the Ocean Beach Eatery’s ice-cream parlour at 52 Signal Street, Foxton Beach).

While the beach doesn’t change a lot, there’s more than enough action with anglers, walkers, dogs, cyclists, runners, quadbikes, horses, driftwood — often piled in sculptures — or potential bonfires (banned, depending on the season), and always with Kāpiti Island greyed out in the distance. This is an extract from The Insider’s Guide to New Zealand, created annually by NZ Life & Leisure. The Insider’s Guide is a thorough and independently researched guide to six of the country’s most spectacular regions, and is packed with recommendations on what to do and see on your next holiday. Order your copy of the 2021 edition here.