Rare footage of a Stewart Island brown kiwi during the day


Rare footage of a Stewart Island brown kiwi during the day from This NZ Life on Vimeo.

The magic of Ulva Island is the loud silence of being somewhere far removed from roads and from the rustle of everyday life. Robins bounce along behind me with the enthusiasm of tiny golden retrievers grabbing worms silly enough to poke their heads above the disturbed soil. The towering, undisturbed native bush is so perfect and so untouched that I half expect a moa to poke its head from behind a rimu and blink ‘Hello”. So while it was incredibly lucky that a male rakiura tokoeka, or Stewart Island kiwi, joined us on our midday walk through Ulva, it also somehow felt perfectly right. Ulva Island, in the Paterson Inlet of Stewart Island, is a predator-free paradise. Not only are the kiwi, saddlebacks, kaka and robins safe and secure in their habitat, they aren’t fazed by curious birdwatchers (as clearly demonstrated by our confident friend above). Photographer Jane Ussher and I were being guided by Beaks and Feathers ‘Angela Stephens when this unbothered fellow wandered across the path in front of us. Ignoring the loud whispers of “OH MY GOODNESS” and the whirring of our cameras, he went about his business with complete disregard.

Here are five things to know about the rakiura tokoeka/Stewart Island brown kiwi, one of the five species of New Zealand’s favourite flightless bird. 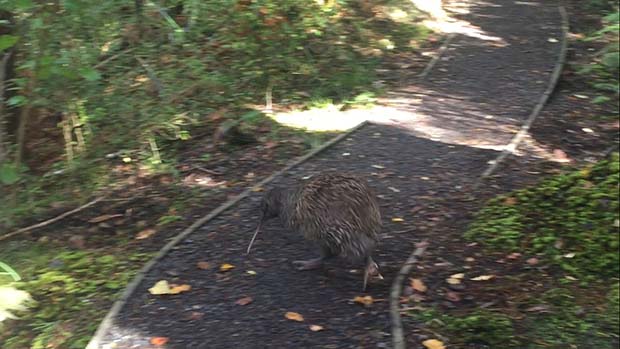 1) Rakiura tokoeka are diurnal and are sometimes seen wandering around during the day (as seen above).

There are a few theories as to why this traditionally nocturnal bird happily scours the forest during daylight. The location is one reason – longer days and short nights mean the kiwi have adjusted to finding food with the lights on, rather than going hungry during short winter evenings. Also, as the parents and chicks can share the responsibility of incubating the egg (see below), the changing roster allows for daytime meals, rather than waiting until nightfall.

2) Unlike their solitary cousins, rakiura tokoeka stick together.

One of the more unusual traits of the Stewart Island kiwi is that they remain together in a family unit much longer than other kiwi species. Multiple generations can be found sharing the same five-hectare territory, and take turns incubating eggs hidden in forest burrows. Kiwi tracks on the beach on Stewart Island.

Picture a kiwi in the wild: the forest floor comes to mind. While that’s perfectly common, the rakiura tokoeka also take advantage of Stewart Island’s golden sands. The submerged kelp forests, drifting quietly in the island’s clear waters, provide plenty of nosh for the kiwi; clumps of the kelp washed up on shore are perfect hiding places for sandhoppers – caviar for kiwi. It’s possible (though rare) to spot them on the beach, gobbling sandhoppers with unabashed glee. Look out for their tracks, like above.

4) The rakiura tokoeka are not small birds.

While tokoeka translates to ‘weka with a walking stick’, the female kiwi can reach around four kilograms, roughly three-times the size of said weka. Our male friend spotted above wasn’t quite that large. While the summer months see a rush a visitors from the mainland, there are only 380 permanent human residents on Stewart Island. Recent estimates put rakiura tokoeka numbers on Stewart and surrounding islands at 15,000. It is not uncommon to fall asleep to a chorus of kiwi, and one resident woke to a kiwi napping on her gumboots at her back door (true story).

Ready to book flights to Stewart Island in the hopes of seeing a kiwi? Keep in mind that these are wild animals and are unpredictable – no guide will guarantee seeing one. Enjoy the Stewart Island scenery, meet the locals, explore the walks and keep fingers crossed – one may appear when least expected. 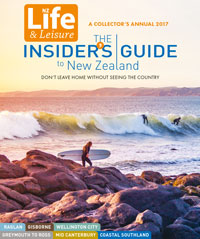 Cheree Morrison is the editor of the Insider’s Guide to New Zealand, and is often out and about around the country hunting out the best regions to visit, interesting people to meet, the most delicious food (muttonbird dumplings anyone?) and the best places to rest weary feet.