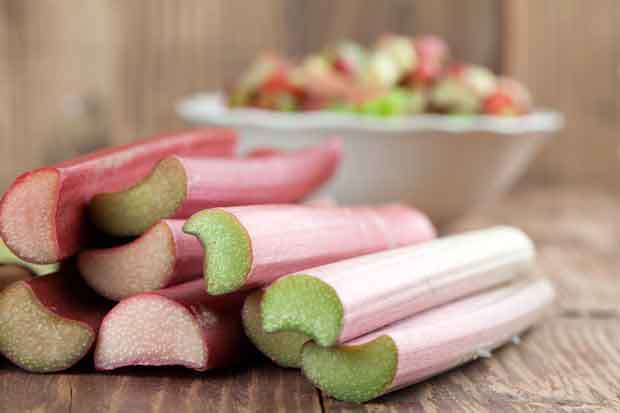 There’s not much Kristina wouldn’t do to procure her favourite garden plant.

I realize that I often disclose things of a confessional nature to you. Why I would feel comfortable doing this in a magazine is a job for someone else to figure out but here’s one side to my personality that’s just a little on the naughty side: I will go to any lengths to procure stalks of rhubarb.

This extends to poking my nose over the fences of perfect strangers to ascertain the contents of their garden beds. I asked one lady if I could have a rummage over her property for edibles.

“Oh yes, I suppose you’re one of those foraging types?”

Her words stewed around in my head – rather like the rhubarb she had given me which was now on the stove – while I tried to work out whether she was accusing me or praising me. In the end I decided that as long as I ask first, it’s completely acceptable to forage in the gardens of perfect strangers.

Have you ever wondered why rhubarb leaves are poisonous and yet the stalks are not? Apparently an adult cow would need to eat 5kg of leaves to poison themselves fatally with the oxalic acid in the leaves but let’s not be trying that. My Dad always put an additional electric fence around the vege garden when the cows were grazing in that paddock as he’d had a few experiences with animals becoming very ill if they ate the leaves.

In medieval times rhubarb was a highly valued herb, imported from Asia. One report from the time records that “the best of all merchandise coming… was from China, especially silks, satins, rubies, diamonds, pearls and rhubarb.”

I have to agree it merits that kind of comparison. Once stewed up, rhubarb is one of those things that for me means comfort, satisfaction and homeliness. The unique taste and texture of the crunchy raw stalks – yes, some people do eat it raw – also lends them to rhubarb and apple crumble, rhubarb muffins, cakes and jam.

My latest project has been to combine rhubarb with rosehips to produce a delicately delicious jam. Over the past 10 years I have picked my yearly supply of rosehips from wild roses that grow on the back roads in the ‘top of the south’ region but I’m sure there are plenty about in your own backyard to experiment with.

I like to peel the outer skin off and dry them but you can boil up the hips and strain the liquid through a very fine cloth (like a clean hanky) to get the hairs off if you can’t be bothered peeling them.

This makes an awesomely quick dessert/snack/breakfast or invalid food.

Cut up your rhubarb stalks, then match with the same volume of apples. Place in a pot with water and bring to the boil. Cook until soft. Take the pot off the heat and stir in the cinnamon and dates. This can be used to make rhubarb and apple crumble or a pie filling. Keeps in the fridge for up to four days.

Note: if your rhubarb is extremely tarty, you can add ¼ cup of sugar or honey to sweeten it up but the dates should do the trick. You can buy rosehip ‘chips’ at some organic health food stores or make your own by peeling the outer skin off each hip, soaking them in a cup of hot water overnight and then drying them.

Combine the rosehips, rhubarb and salt in a pot and bring to the boil. Add a small amount of water if needed. Simmer for 10-15 minutes until rhubarb is soft.

Add sugar and lemon rind and simmer for a further 20 minutes, stirring constantly to prevent the mixture sticking and/or burning. Spoon jam into hot sterilised jars and label. Best kept in refrigerator once opened.

Kristina Jensen lives in the beautiful Marlborough Sounds and sidesteps supermarkets, gardens madly, and is always looking for ways to save money, and make anything and everything herself.