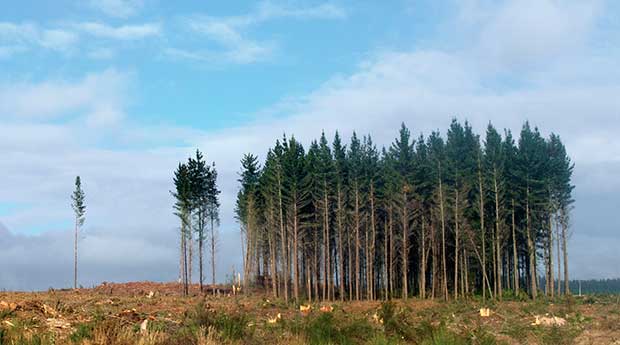 Trees exposed to the elements, for example during felling, are far more vulnerable.

“Some trees survive extreme winds better than others,” says John.

“A century of observations in New Zealand forests suggests that rimu, totara and miro tend to weather storms better than kauri and beech. Smaller wind-resistant choices include Pseudopanax species (such as lancewood and five-finger), kapuka and kamahi.”

But don’t worry if you want to plant trees you love which may not be as wind-resistant says John; most trees adapt to the prevailing conditions, especially with carefully planned planting.

The factors to consider when planting a tree include:

• how wide and tall it is likely to grow?
• is there enough space for the tree canopy?
• what could it take with it if it fell?
• is there room for a wide and deep root system to develop?
• how quickly will a tree or trees mature?

Fast growing trees are very attractive, but they often will mature and reach heights that make them vulnerable to windthrow.

Mature trees are often designed to shed big limbs, which can be dangerous. Liquidamber trees are a classic example of a common, large and fast-growing tree with a habit of dropping sizeable branches.

“They may have lovely autumn foliage but I wouldn’t park my car under one,” says John.