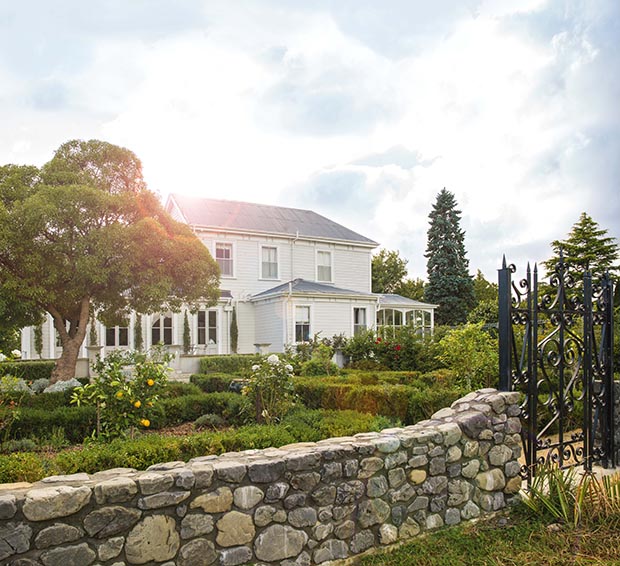 The latest instalment in a story that began 170 years ago sees a historic estate earning its keep in a very modern way.

Janelle Harrington and Rob Allen weren’t sure about the sort of property they wanted eight years ago, but it was definitely going to be in Wellington. It was certainly not going to be a nine-hectare estate in the South Wairarapa countryside that required a barrel of money and an even larger amount of elbow grease. “Janelle always saw rural New Zealand as desolate, uninhabited and depressing,” recalls Rob. She was born and grew up in Sumatra – vibrant, lively, full of activity, tropical plants and animals, exotic culture, noise, mayhem. To be uprooted for rural Invercargill at the age of 12 was a shock. She preferred city life. Yet, skimming through the property ads, Tuhitarata piqued her curiosity. There was something about it that was interesting, something about its secluded homestead, old cottages, shearers’ quarters, run-down working stables and covenanted 300-year-old native bush.

The estate had slipped into public obscurity but had potential. That is, if you could see past the dilapidated roof, the rotting walls, the lack of heating and the encompassing brambles. Janelle with Polo, the much-loved black Labrador who is Toffee’s uncle.

Rob was baffled that Janelle had even suggested they take a look. But he, too, was curious and arranged a viewing by himself. As soon as he saw the large chook house he knew that would clinch the purchase. Janelle would love the idea of having chickens in a chicken house. And indeed she did. Tuhitarata had charmed its new custodians.

The chook house reminded Janelle of the vibrancy of Sumatran life, where most households kept chickens. The property would also be a great home for the couple’s young daughter Zita, then four, and it would be an opportunity for Rob and Janelle to contrast their corporate lives. 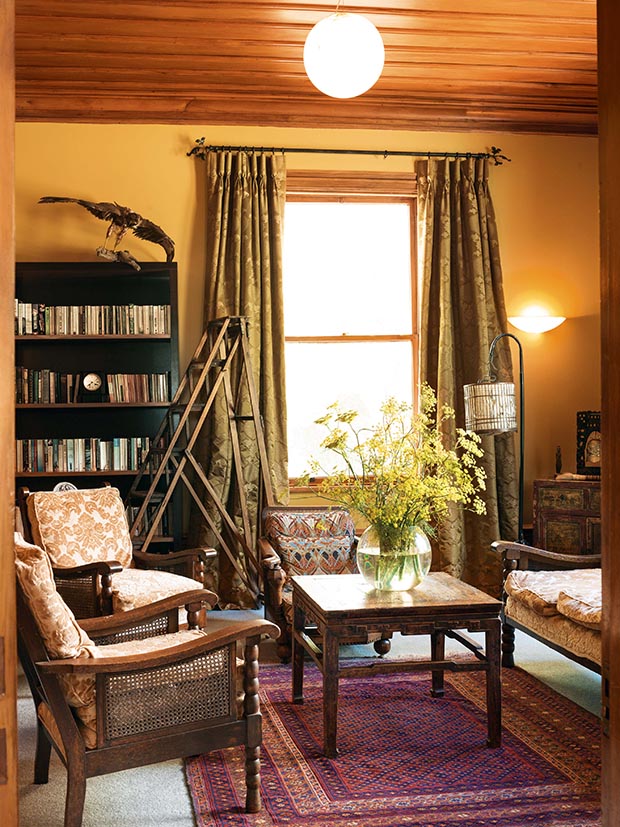 Both Rob and Janelle enjoy scouring auction houses and antiques stores for large-scale furniture to fill the homestead’s lofty rooms.

“This place was unique. It was lost in time, really,” says Janelle. “I could see what we could achieve doing something that we would love.” Both were aware of the scale of the work ahead. Previous owners had poured their energies into different aspects of property maintenance but there was still a lot to complete to a modern standard.

More stories you might like:
How the Coromandel environment inspired the couple behind Cathedral Cove Naturals coconut yoghurt and cereal

The simultaneous excitement and stress were perhaps all part of the attraction. From the outset they knew that eventually the property would have to earn its keep. Exactly how, they didn’t yet know. They embarked on renovating the two-storey homestead and three-bedroom cottage that would later become a home stay. They filled the huge rooms with an assortment of furniture and art from different eras and cultures.

Janelle was determined that the homestead would reflect their interests and style, rather than be confined to a traditional look, so early New Zealand furniture happily sits alongside art deco and items from Indonesia, North Africa and France. 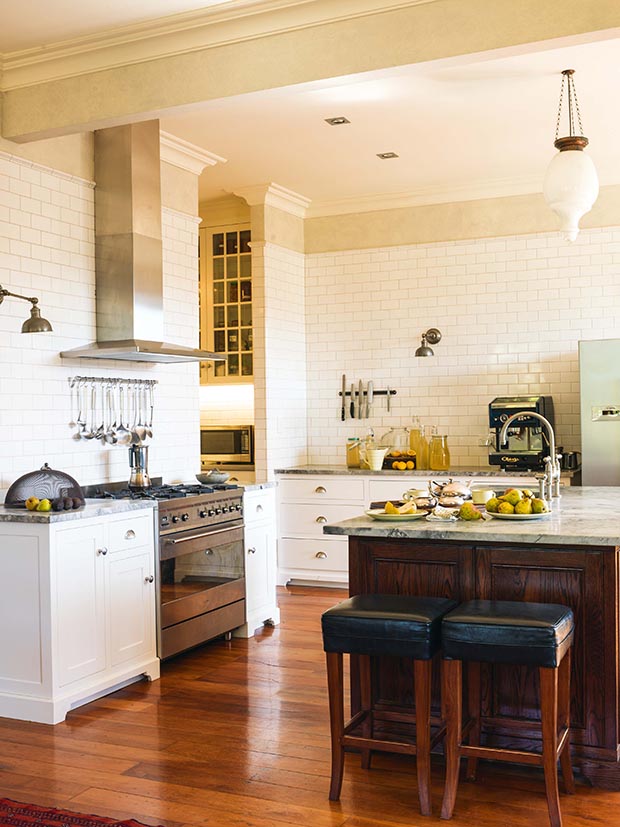 The kitchen was designed by Janelle and the plan drawn up by Hannah who is an interior designer.

Like many renovations, the time-frame and budget increased along the way but, as work progressed, Rob and Janelle realized how much they enjoyed sharing the space with visitors. After hosting some family celebrations, the idea to develop a wedding venue emerged. Market research confirmed that it could be a viable and sustainable business.

The stables were the jewel in the crown of the plan. Although dilapidated, the building had grandeur and character, enough space for bathrooms and a commercial kitchen and was positioned alongside ancient maples, oaks and gingko that offered shade on scorching summer afternoons. 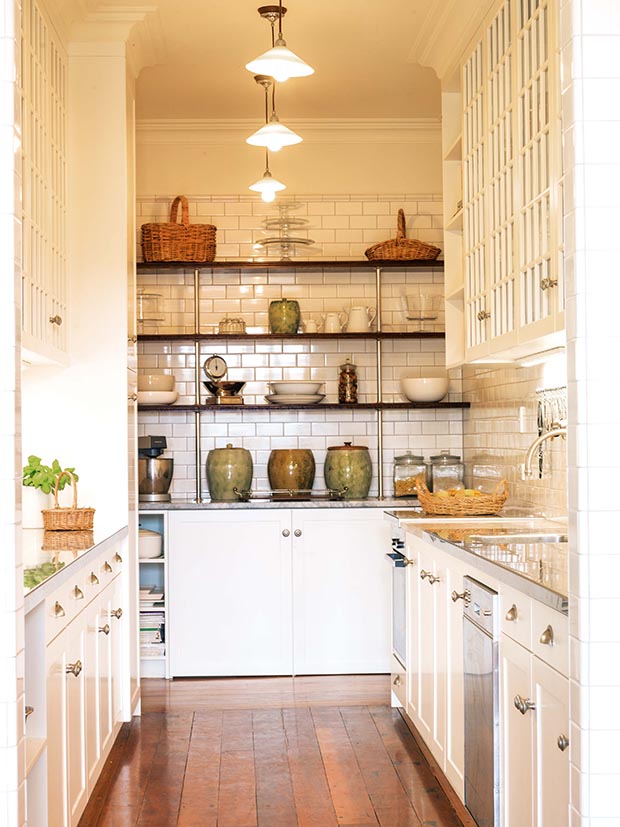 The scullery acts as a second kitchen with space for plating-up.

They removed the mezzanine floor to make the most of the soaring rafters and ceilings, insulated and added heating and huge, romantic chandeliers.

They replaced wall sarking panels with windows so guests could enjoy views out to a new wildflower garden. This garden proved to be costly and tricky to maintain, but Rob and Janelle will persevere because people love its rustic beauty. Next, a two-room building, believed to be the schoolteacher’s house, was transformed into a honeymoon cottage. 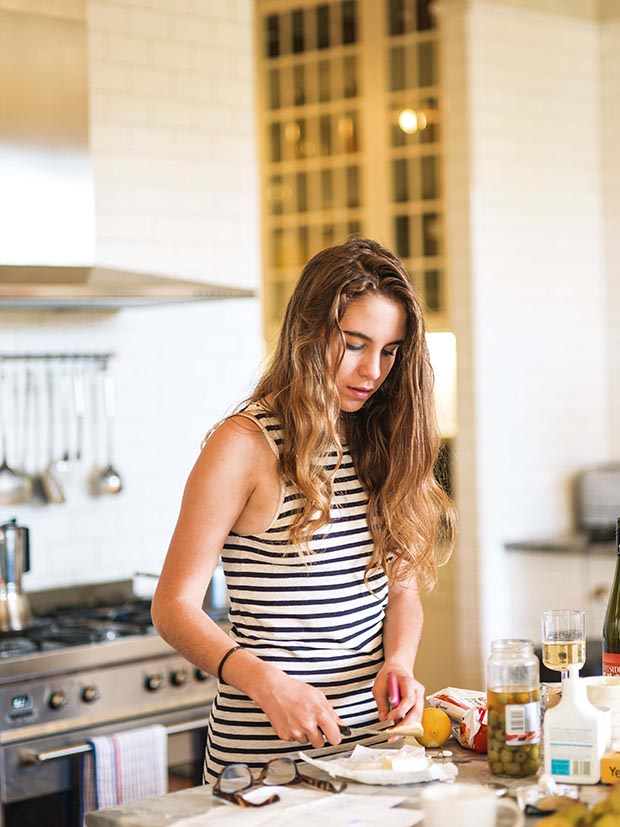 Rob stepped back from his consultant’s job in government relations and communications to manage the renovations and launch the wedding-venue business, Lacewood.

Janelle, meanwhile, continued to work long hours in the city as an organizational development and change consultant to keep the bills paid and spent weekends making design and decorating decisions. 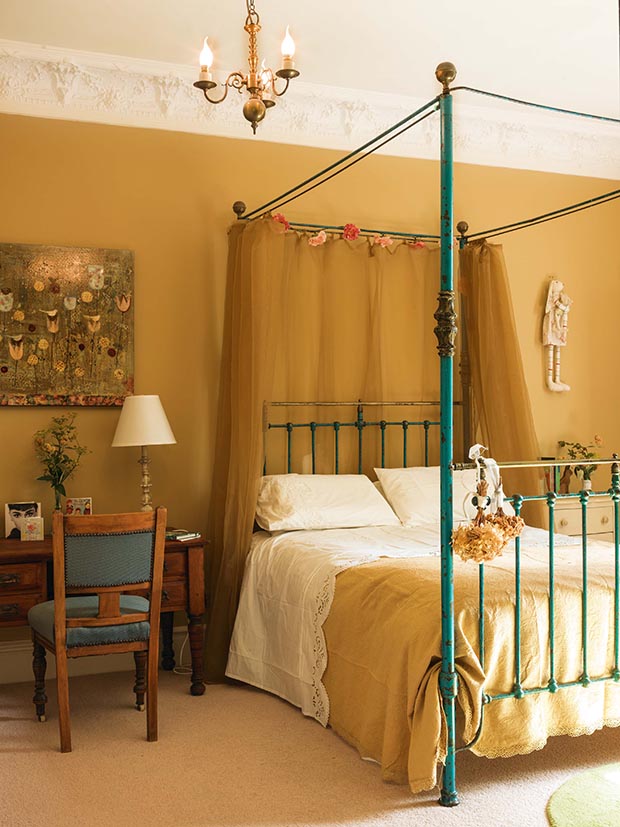 They were often stretched to the limit, emotionally and financially, but their vision sustained them. “I felt this was going to be a gem, if we could just keep going.”

They were lucky to find local tradespeople who were reliable, had passion for heritage projects and experience and knowledge of traditional techniques. “We have built some great relationships with our tradespeople,” says Rob. “They have shared our enthusiasm and been willing to turn their hands to anything. Continuity of contractors has been really important.” 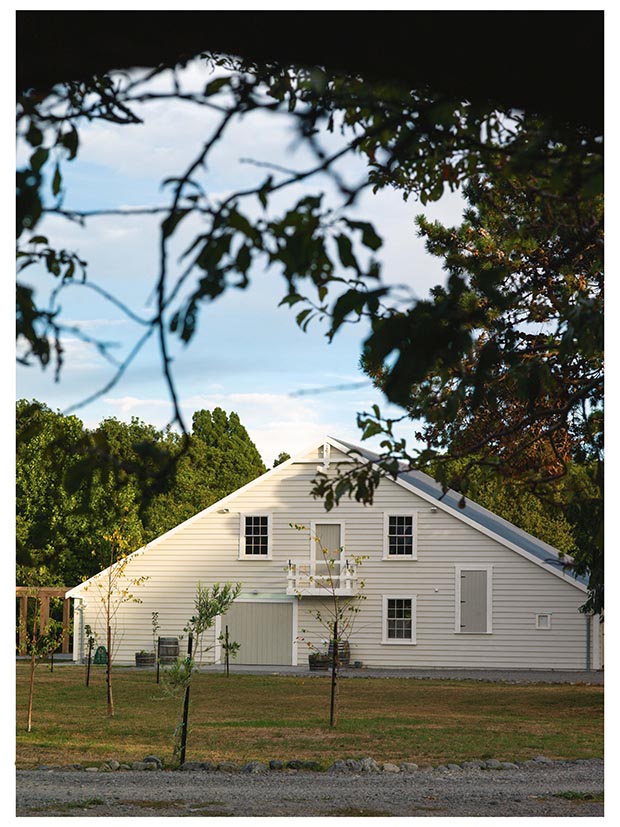 The restoration and refurbishment of the stables is a source of immense pride for Rob. The cavernous space used to house livestock, feed and farm equipment.

Janelle began to research the property’s history. The story of Tuhitarata captivated the couple, fuelled their enthusiasm to keep going and helped them focus on their long-term vision rather than its short-term costs. “I was very anxious for a very long time,” says Rob. “I often felt daunted by how much we had to do. It was Janelle’s enthusiasm and vision that drove the project.”

Looking back, it’s the interior design process and the gardens of which Janelle is most proud. Each room in the homestead and cottages has been renovated and redecorated, along with the creation of a series of pretty garden rooms that are home to a cote of doves. Rob is most proud of the stables. “I know we saved it and have given it another 100 years of life.” 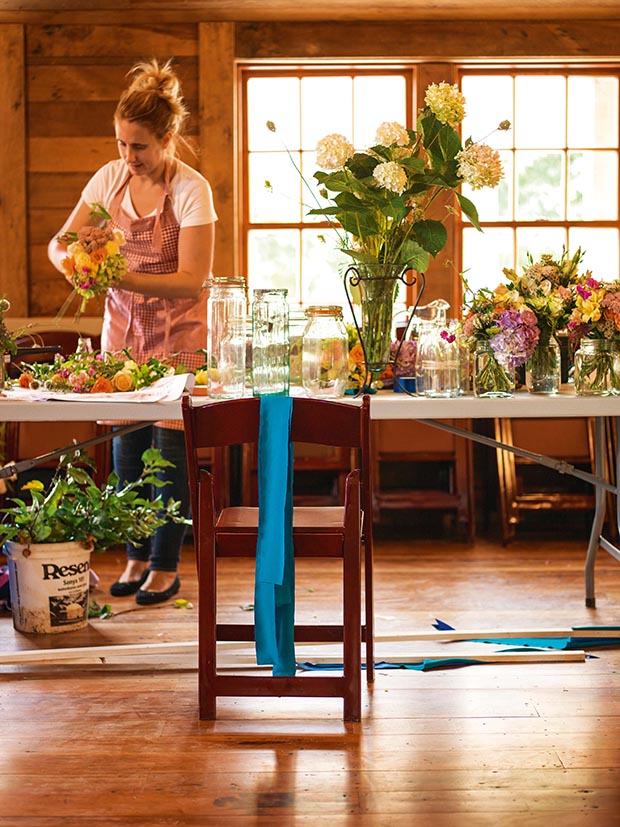 Now that the business is up and running and enquiries and bookings have started to flow, they are more confident about their impulsive decision eight years ago. 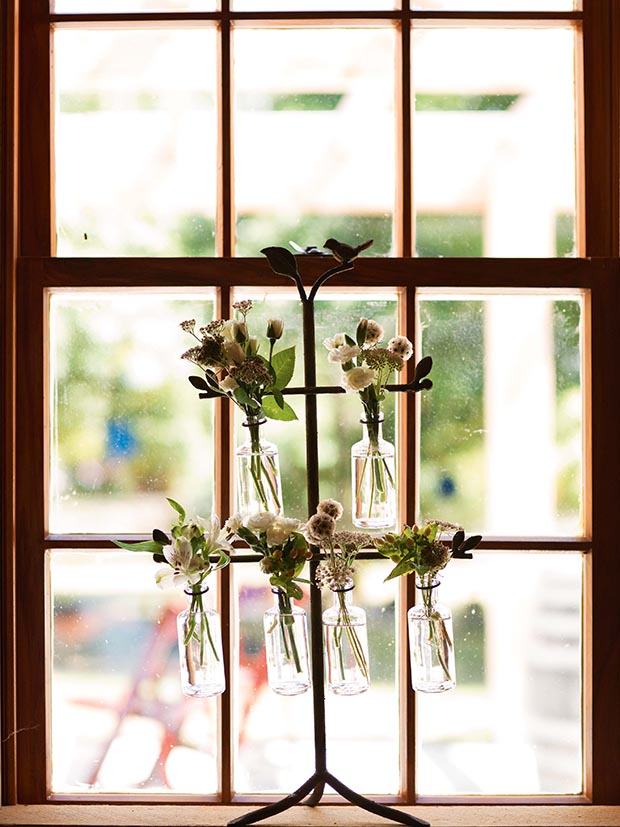 Wildflowers – fennel, cornflowers and red hawthorn berries – are collected from the surrounding countryside by Janelle and Tuhitarata’s gardener Donna to decorate guest bedrooms.

“Sometimes you just need to face the fear and do it,” says Janelle. “Get the information you need to believe you can do it. It’s scary but you have to have faith in yourselves.

“I feel that we can make the business work and realize my ambition of mixing up corporate work with another lifestyle. It would be great if we can get to a point where the business is self supporting so we can go on holiday, too.” 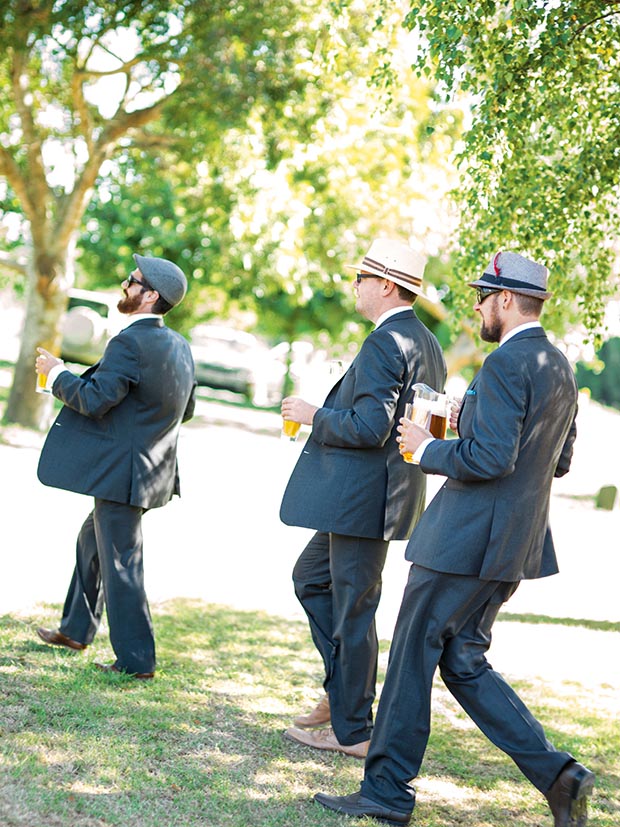 Both feel privileged to share Tuhitarata. “I feel it is a place that is good for the soul,” says Janelle. “I know it’s a cliché to say that. But I don’t know how else to explain it. It is just deeply satisfying to be here.” It seems that Tuhitarata Estate has come full circle as a place to begin a new life. 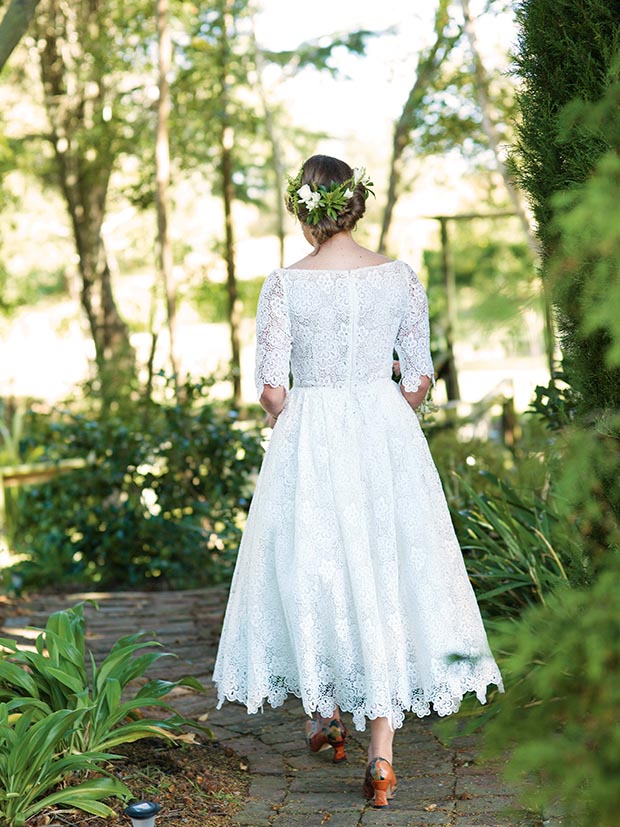 DREAMS VERSUS THE BANK MANAGER
Rob and Janelle were inspired by a vision to create a new life for their family and to preserve a property with local and national significance.

Their decisions have had an element of impulsiveness; the launch of their business venture may seem happenstance, but it’s always been balanced against input from trusted sources and their own sound judgement and instinct. They share the rationale behind some of their biggest decisions. 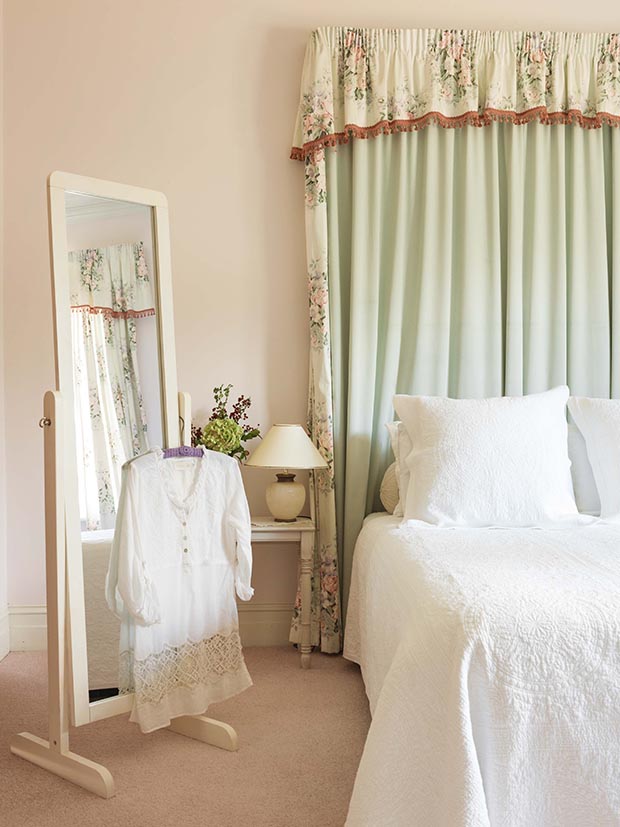 The tiny, two-roomed honeymoon cottage sits in its own garden and is accessed by a footbridge over a dry stream bed.

– Know and trust your individual strengths.
– Find out as much as you can about what you’re getting into.
– Make informed decisions. Gather whatever information you need to feel confident in all your decisions.
– Be prepared for cost and time over-runs. 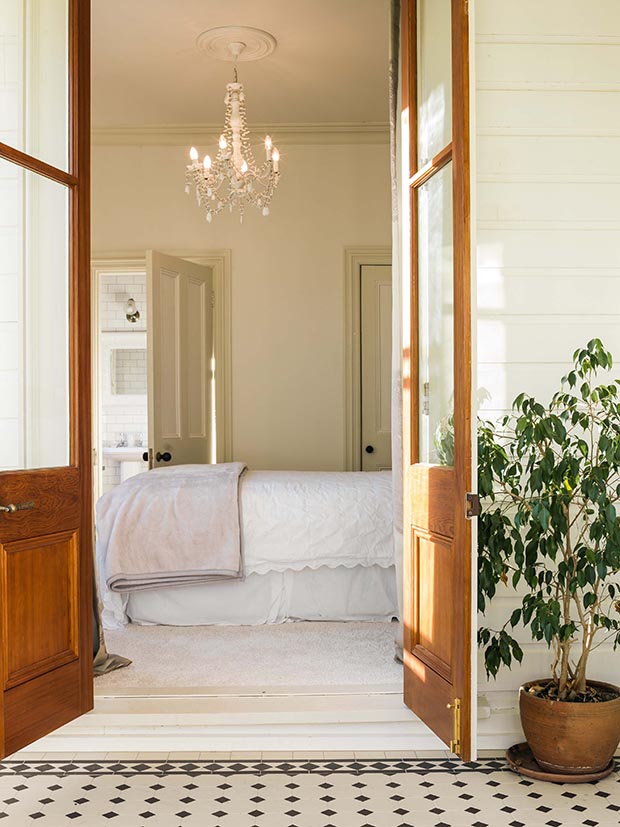 – Have an income stream to keep the project moving forward. Janelle continued to work long hours in the city after Rob began project-managing the renovations and launching the wedding-venue business.
– Find reliable tradespeople who understand what you’re trying to achieve – they’re more likely to work in partnership with you and go the extra mile.
– Have the courage to accept your fears and to ignore them. 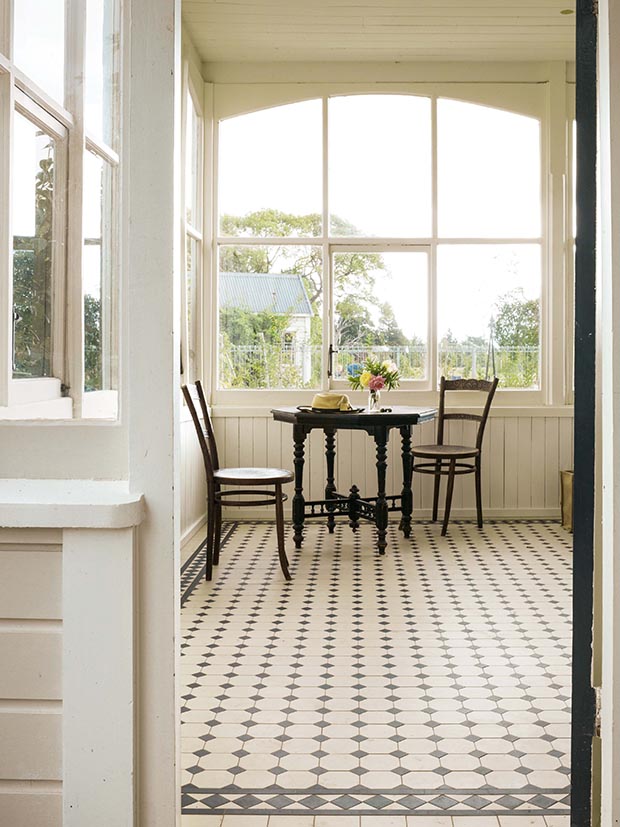 – Believe in yourself and each other.
– Support each other through doubt, uncertainty or anxiety.
– Accept the boring bits such as developing a laundry routine, a cleaning roster, a bookings-and-enquries system and a garden maintenance plan. – Have a dream and stick to it.
– Have a plan B.
– Have fun.