Sawmill Brewery scales up to 1 million litres per year capacity 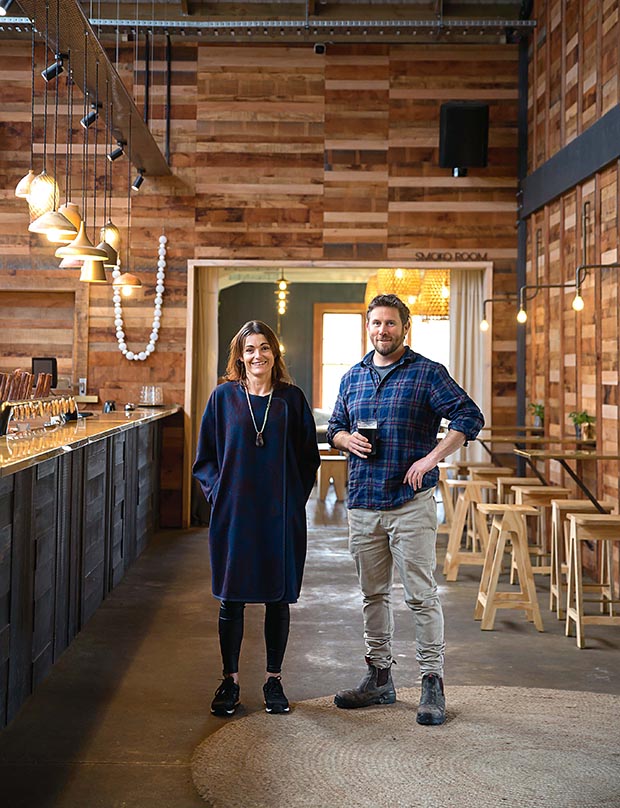 Kirsty and Mike at the entrance to the brewery and bar.

A Matakana couple find that brewing beer, staying creative and living in the country is the best medicine for what ails you.

Most young children splash about in the bath playing tea parties or racing wind-up toys, but Stirling (7), George (6) and Beau (3) Sutherland are a tad different. Their routine, to make beer from the soapy bubbles, is not worrying or even all that surprising given  that their mum and dad are absorbed by the science-meets-art activity at Sawmill Brewery near Matakana.

Mike Sutherland and Kirsty McKay have been busy in the past seven years; they’ve become parents three times over, and turned a 27,000 litre per annum venture into an operation that has the capacity to produce more than one million litres per year. No wonder young Beau draws thermometers and bottling buckets in his artful moments. 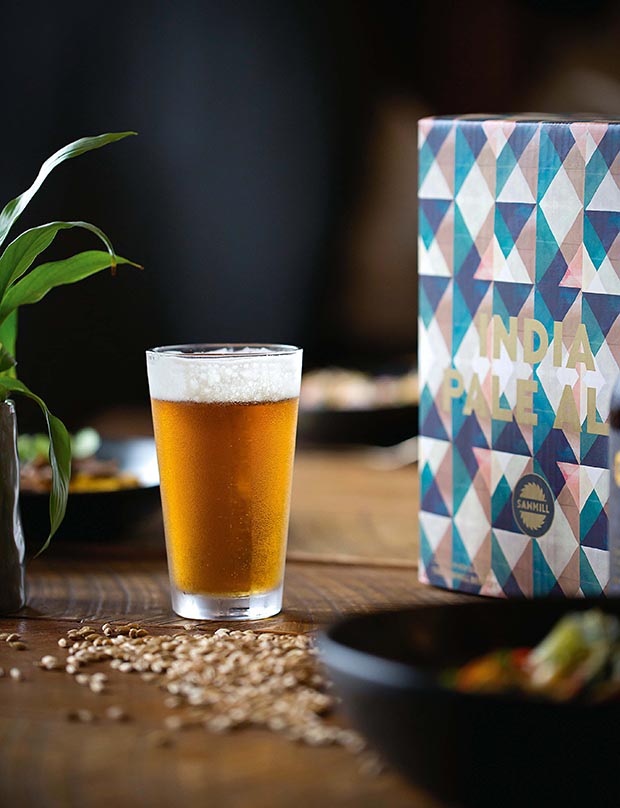 Mike, with his hipster beard and graphic T-shirts, is the archetypal brew-master. Kirsty, in gumboots, plaid shirt and baseball cap, also slips seamlessly into kinfolk mode. Yet theirs was a circuitous route to owning a boutique brewery. When Kirsty, who worked in refugee law, was offered an internship with the United Nations on the Colombian coast, Mike wanted to pack up his commerce and horticulture degree from Lincoln University and join her. “I was going to be despatched to a jungle camp in Colombia,” says Kirsty. “It simply wouldn’t have been possible for Mike to live there too.”

What followed was a restless searching for place, following job offers to Christchurch then Auckland. Mike’s role at a trading company in Albany allowed the couple to rent in the satellite town of Matakana. Then, six months later, redundancy brought the chance to make the village a permanent base. 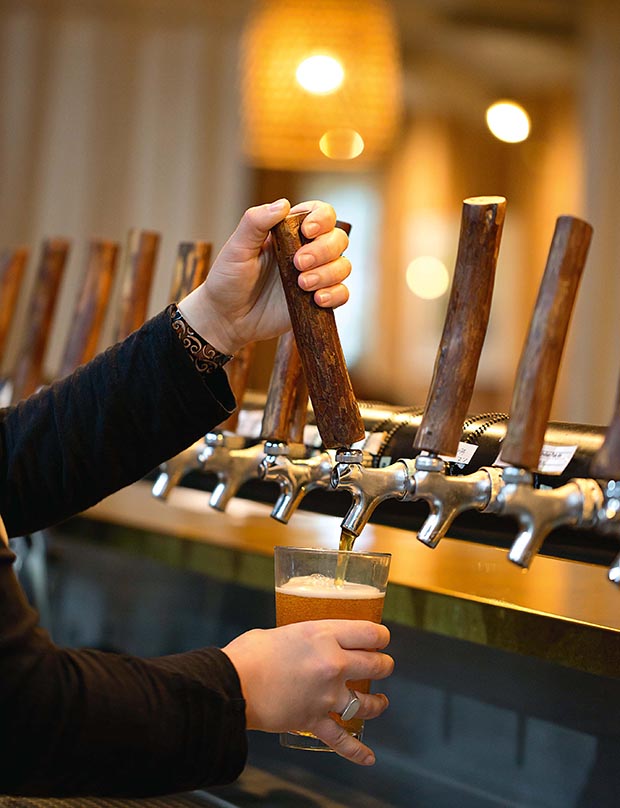 The bar has 15 different beers on tap, all made on site.

Mike, who’d studied viticulture and has an affinity with brewing, asked Leigh artisan brewer Peter Freckleton to take him through the steps. As he watched, Mike had an epiphany. “I love the workings of factories and the idea of producing something that makes people happy appealed.” He asked if Peter wanted to sell. Kirsty rose from her sickbed (where she was enduring a horrendous pregnancy with their second child) just long enough to sign the purchase papers.

It was the start of a busy life, with Mike up at five to make deliveries, back in the factory by midday brewing, checking emails at night and Kirsty filling bottles, negotiating deals and (one day) taking four-month-old George to a meeting with Silo Park, hoping to supply its pop-up bars. Although George threw up all over the floor, the deal came through. 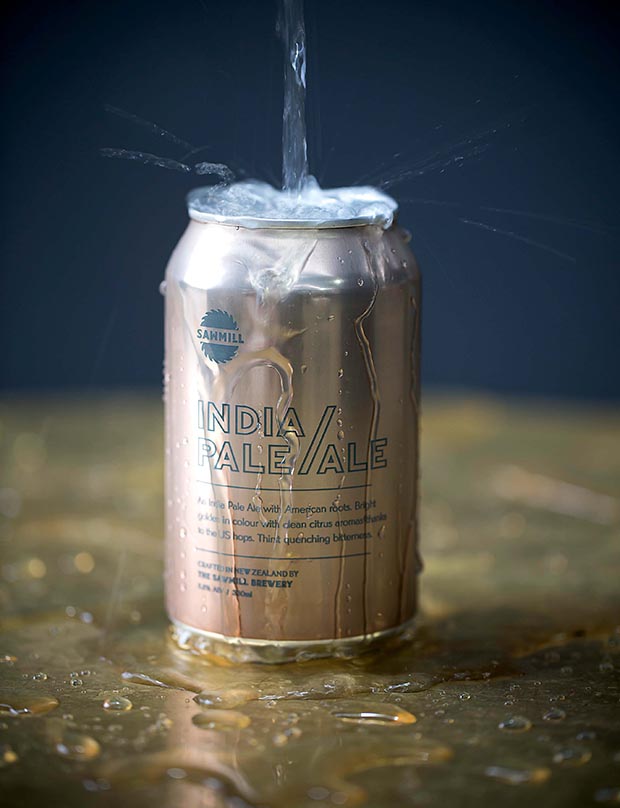 When Sawmill Brewery entered its first NZ Beer Awards in 2012,  its pilsner claimed gold. “It was intensely satisfying,” remembers Kirsty. The win gave the couple the confidence to push the product to a  bigger market. “We were growing quickly and capacity was becoming a real issue,” explains Mike.

They could have rented bigger premises in an industrial area, but that wasn’t their vision. Instead they worked with developers on a new location in the heart of the community.  The purpose-designed brewery on Leigh Road just minutes from Matakana takes the form of a shed built at right angles to an on-site eatery, creating an L-shaped courtyard with an intimate view of moody Mt Tamahunga. Kirsty: “We wanted the building to reflect what Sawmill is. And we are about place.” The Smoko Room, which opened in July 2016, was co-designed with artist friend Mike Petre, who worked alongside design consultant Rachel O’Malley. “They are both super ‘big picture’ and super detailed,” says Kirsty. Mike fashioned a modern-rustic form clad in storm-felled beech and, where possible, furniture and art was sourced from the district.

They designed brass counter tops and bar leaners, and commissioned soft furnishings such as shibori dyed cushions from local Janna Isbey. Pendants above the bar were carved by Michael Bernard, who also sharpens knives at the local markets, while plywood bar stools came from Ākau Studio in Kaikohe, a social-conscience enterprise that encourages school students into design. 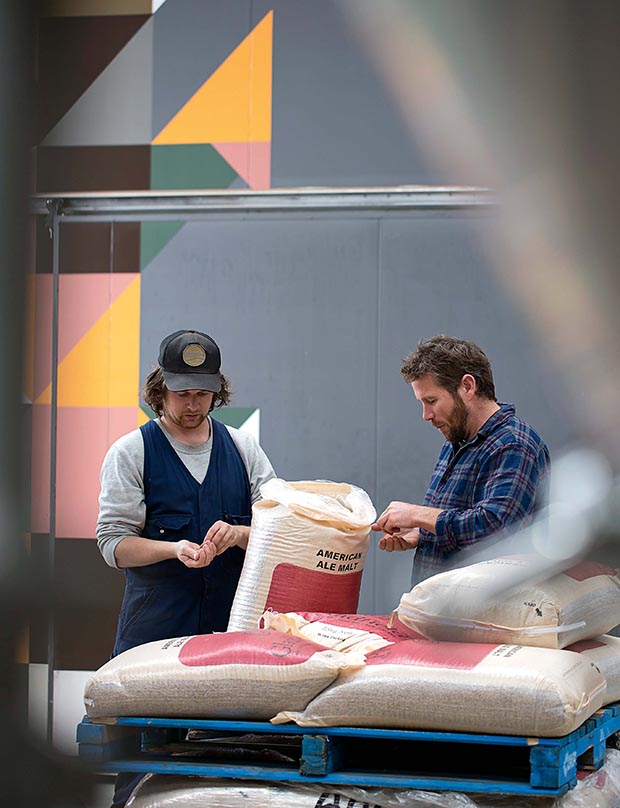 Now that the core range is ticking along – the pilsner is Mike’s favourite, a herbaceous drop with a tart gooseberry hit – the “off-cut” series, a collection of experimental beers, is continuing the creative journey. “I don’t get to roll up my sleeves as much now that we have an incredible team on board,” says Mike whose focus has turned to growing the market. He’s not doing too badly either: exports to Australia have just started.

More stories you might like:
From Mt Roskill to New York: Sunday night dinner with Anthony Hoy Fong

It’s been a convoluted route to this homecoming, but Kirsty and Mike feel fortunate to be able to drive the business forward while living in a valley where success is measured holistically rather than by income alone.

Mike: “Daily Organics’ kombucha. It’s like a tart, fizzy tea that’s really good for your digestion. A friend, Delwyn Ward, started selling it at the Matakana Saturday markets and now she has a brewery in the village that is certified organic. Kombucha is fermented with a scoby, a bacteria culture that looks a bit like a jellyfish.”

Kirsty: “Home-brewed coffee with fresh buffalo milk from our friends Annie and Phil at the Whangaripo Valley Buffalo farm. Just a straight glass of the milk is so good.”