Of all of the scenes set decorator Megan Vertelle has crafted into reality, her patchwork Piha villa on a kauri-covered hill is the one that steals the show.

There’s never a louder silent conversation than one held behind the back of a real estate agent. As Megan Vertelle and Age Pryor followed the chatting realtor down the hallway of the newly listed Piha villa, they had a hurried discussion with their eyes while continuing to sedately nod and hmmm at the agent.

This is it, they were certain. They didn’t mention that part of their deposit was currently in the form of two plane tickets to France, nor that the home was a smidgen (well, several smidgens) above their price range. They knew it was meant to be theirs. And so it was. 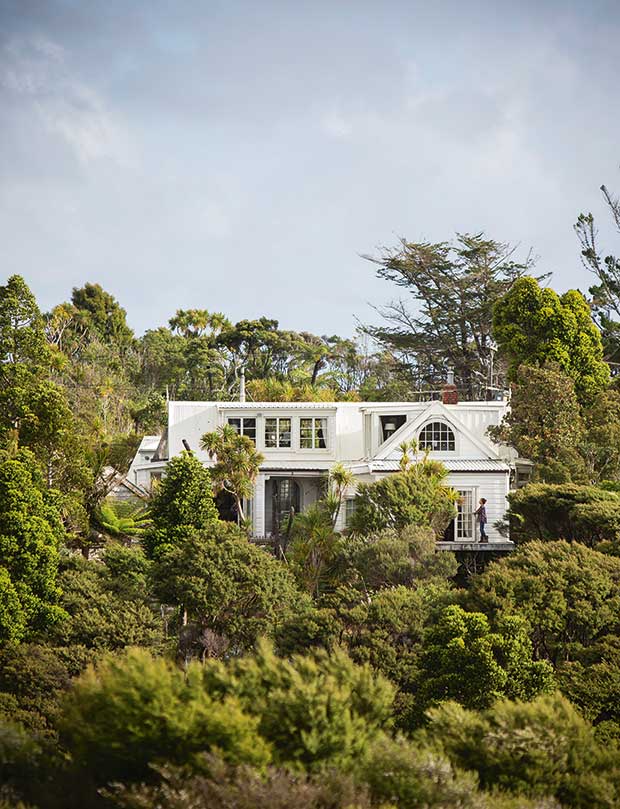 Despite its vintage façade and air of yesteryear, the perfectly imperfect home was built in the 1980s by a couple who owned a demolition yard.

The half-hectare property couldn’t have been more perfect if Megan had designed it herself, and she knows a thing or two about creating scene-stealing sets. A set decorator for New Zealand-based film and television projects, Megan is the long-armed conductor of an orchestra of blacksmiths, designers, dressers and buyers who turn storyboard musings into material worlds.

Her career began with her feet firmly on the bottom rungs of the ladder. Step by step, she scaled the silver screen and started landing jobs on the film retellings of “fantastic, inspiring New Zealand stories” such as Whale Rider and The World’s Fastest Indian.

Over the past two decades, her CV has expanded to include films such as Mister Pip, A War Story and television series The Shannara Chronicles, Spartacus and Legend of the Seeker. 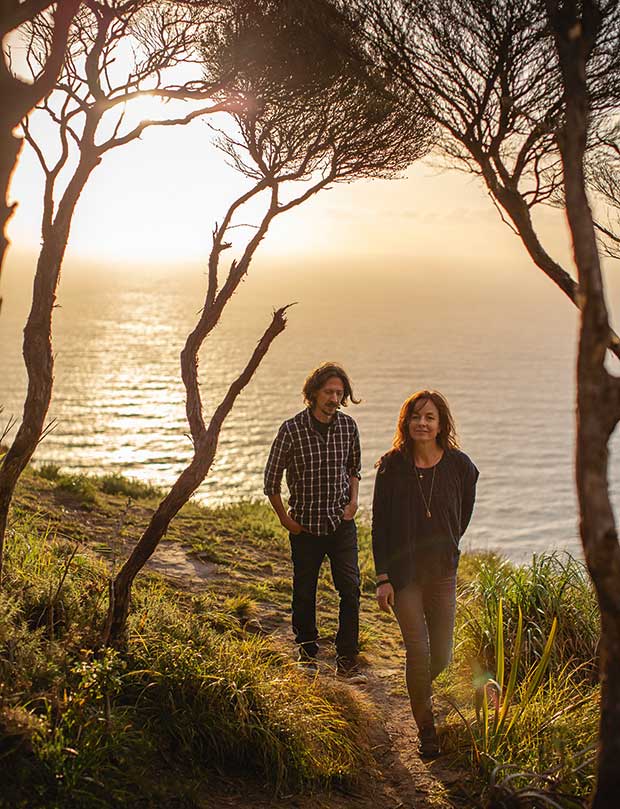 Piha’s Mercer Bay loop walk is one of their favourites, not only for its dramatic outlook. The track leads to one of the oldest pā sites in the area.

“It’s a job that never gets old, every set is different and presents me with new challenges. There may be a picture or an idea, and then it’s up to the team and me to find or make everything needed.

“Sourcing specific antiques and furniture can be difficult in New Zealand, but Kiwis never say no, they are always determined to find it somehow or make it.”

Leaving work at the front door was never an option for the creative couple. Megan’s role requires intricate knowledge of niche topics (how historic torture devices work or where to purchase parts of a crashed plane, for example) so she spends many an hour in her studio lost on the internet. 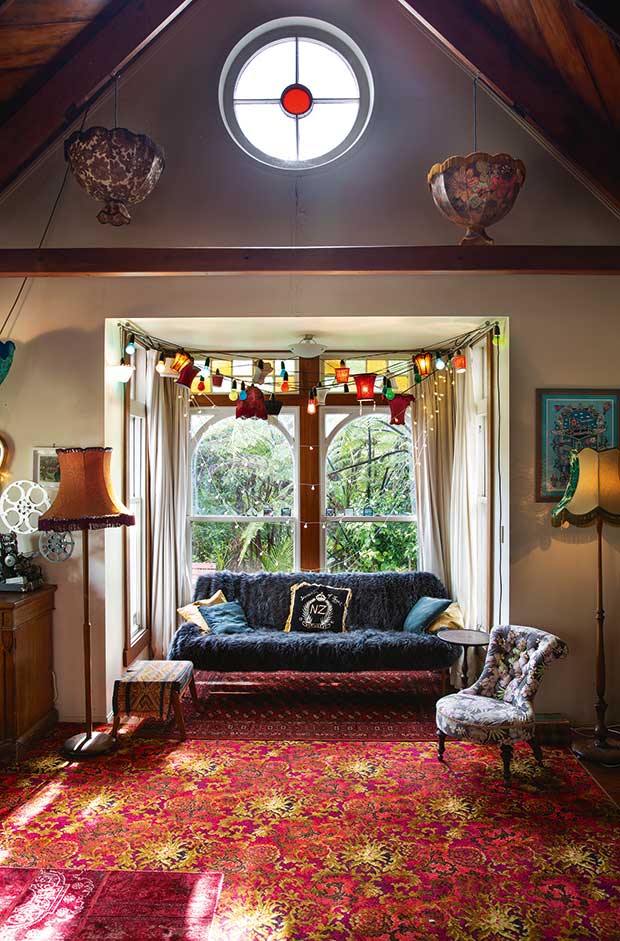 “Surviving in a creative career in New Zealand requires discipline and your partner needs to support your continued learning, exploring and practising. Age and I share a similar mindset; our paths intersect from time to time as we share ideas and lend support, but we can lock ourselves away for hours or days on end, and the other will understand rather than knocking on the door complaining that there’s no one to watch Netflix with.”

As a founding member of the Wellington International Ukulele Orchestra and the Woolshed Sessions, and a key member of collectives Fly My Pretties and Congress of Animals, Age is often on the road. When not touring, he’s writing songs, singing songs, producing songs and playing them in his studio, with its crystal leadlight windows, views across the kauri and soundtrack of bees from the hive below. 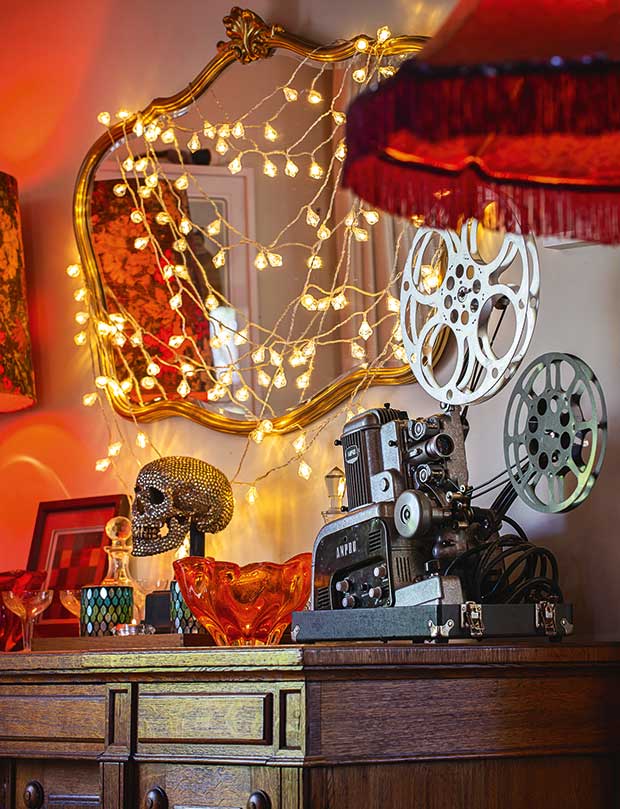 The crystal-embellished skull was created to add flare to a medieval treasure room.

It’s little wonder that just months after ukulele-loving Megan met Wellington-based, ukulele-playing Age in a Piha hall, he moved from the capital city to the coast. 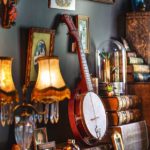 While most 8mm film has long decayed and turned to dust, the vintage projector remains in working order, and Age has been known to play a tune or two on the banjo uke, or banjolele. 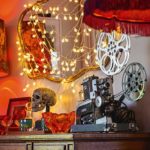 The crystal-embellished skull was created to add flare to a medieval treasure room. 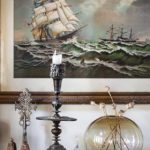 Not all of Megan’s treasures come from a silver screen backgroun. This print came from antique dealer Jim Drummon’s Anzac Avenue store before it closed in 2009. 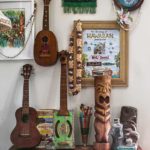 The framed Bill Sevesi poster was carefully torn from a Karangahape Road hoarding by super-fan Megan after attending one of the ukelele artist’s concerts. 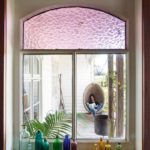 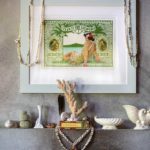 “Piha attracts creative minds and independent spirits; it’s wild, rugged and free,” says Megan. “The landscape never ceases to feed the mind and creativity. The peace and serenity balance my film studio life and the long days. I always feel restored and regenerated.”

When not seeking serenity by pulling weeds in the garden or attempting to manoeuvre another vintage lamp into the depths of her garage-cum-storage unit (Age just shakes his head at this stage — what’s another one to the 100 and counting?), Megan is elbow-deep in developing lotions and balms for her Belle Bird range.

The Piha property covers half a hectare, half blanketed by native bush. When Age and Megan first saw it, the gardens were overgrown and wild, but working bees with time-generous friends have tamed the greenery. Weeding and planting are by hand and without spray to keep everything organic. 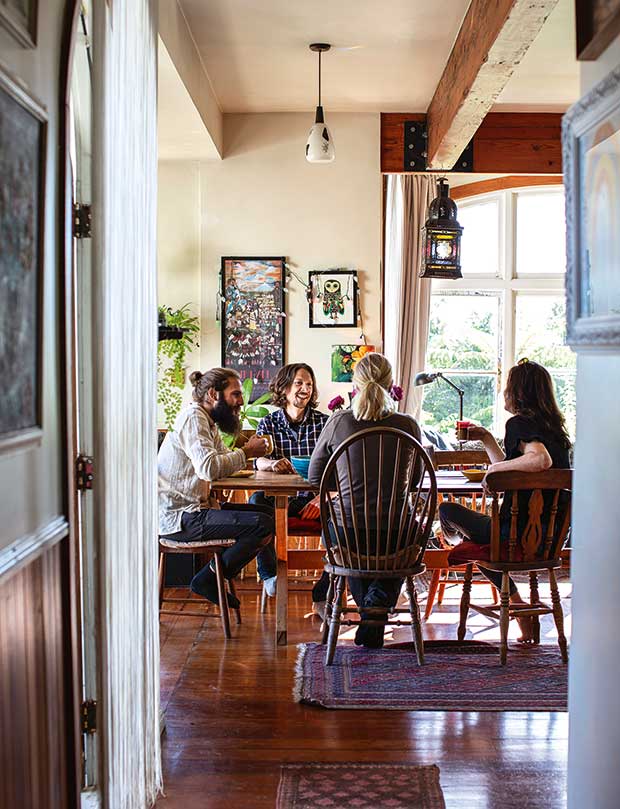 Although the home showcases local art, guests come from far and wide, with musicians from Berlin and Paris, and wwoofers Sam and Sara (above, at the table) from Sweden.

For the past three years, the couple has opened their home to wwoofers. “We love the cultural exchange. We make friends that last a lifetime. In what feels like a politically divided world, it’s nice to be reminded of our human commonalities.”

Most meals include homegrown vegetables and herbs, and oft-overlooked but nutritional “weeds” like dandelion, plantain and dock.

Megan dries herbs in the glasshouse, such as lemon balm for tea (“great for cramps and anxiety”) and the glasshouse is also home to her recently re-potted arabica coffee tree. The 10-centimetre seedling, purchased on a whim, grew to more than two metres tall, dominating the couple’s dining room. 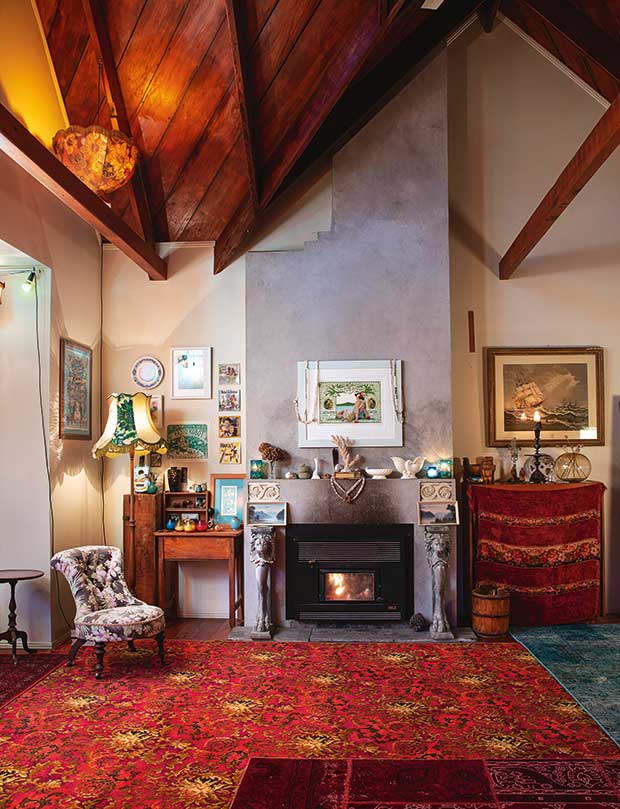 Instead of for watching TV, the lounge is more commonly used as a concert hall, where small gatherings of friends, family and neighbours enjoy performances from Age and his musically gifted friends.

Before wrestling it out of the house and giving it a decent pruning, they harvested the beans and now brew their own coffee.

As a follower of Ayurveda — a holistic belief that mind, body and spirit intertwine to influence health and well-being — Megan has always had an interest in herbs and natural health and has practised yoga since she was a teenager. A particular in-depth research deep-dive for the film adaptation of award-winning novel Mister Pip educated Megan on the uses for coconut oil (as skincare, fuel for cars and medicinal and culinary purposes among others) and she began to potter and ponder. 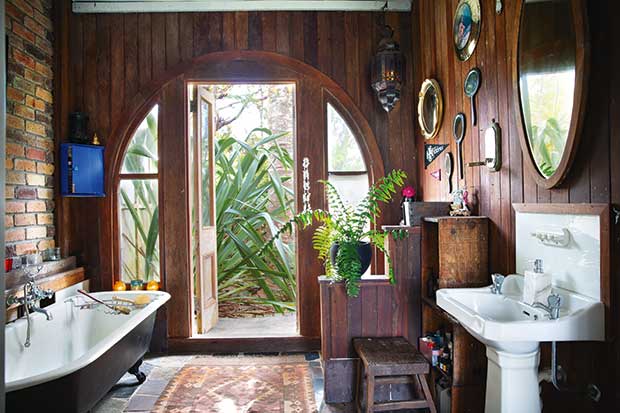 From the claw-foot tub in their “Swedish bath-house” bathroom, Megan and Age can watch tui singing in branches of nearby kauri.

“My skin was bearing the brunt of the bright lights and long hours. Oils are an integral part of Ayurvedic medicine, so I made a balm from coconut and sesame oils, and it saved my skin and became a hit with friends and family.” Megan’s treasures can even be found in the upcycled bathroom.

Everything is as locally sourced and sustainable as possible, including Megan’s handcrafted herbal extracts and infusions from homegrown plants.
The ebbs and flows of the film industry allow her to balance her “day” job and her balm side-business, but it’s a balancing act that sees her spending weekends at her imported still or hand-labeling jars. 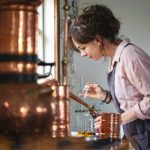 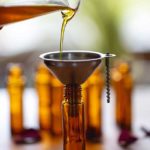 Oils are then used in products such as her perfume. 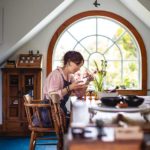 Megan creates balms and oils for her side business, Belle Bird Botanicals. 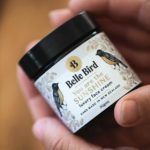 Belle Bird Botanicals recently had a refresh thanks to local designer Ann Davenport. 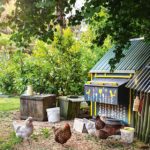 Heritage hens outside their hen house, decorated by Megan. 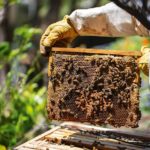 The beehive is a warre hive which uses bars instead of frames and allows the bees to build the honeycomb from scratch.

While growth is possible, it’s not particularly necessary. “I question why success is measured by the size of your business. I ask myself — can it support me, what is the impact on the environment, and am I doing more good than harm? If so, then I’m successful. ”

What they have is a home that is entirely theirs. Hours spent trawling second-hand shops and befriending wholesalers, and saving props from being auctioned, donated or sold have resulted in her masterpiece. Everything is pieced together while remaining chaotic — threaded with songs and stories, memories and laughter. Summer nights pass by in a haze created by good food, excellent company and soft lighting. The 100-year-old railway cottage in the background is currently in use as a garden shed and storage. 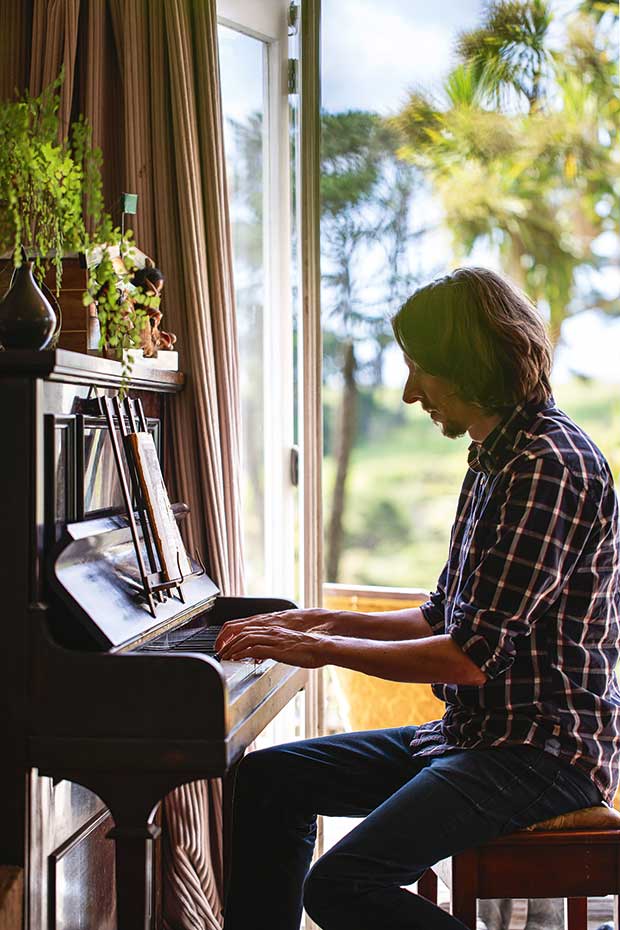 In 2018 Age wrote and recorded an original song for Trustpower, We’ve Got the Time, and the accompanying ad was shot at Age and Megan’s home. While Age appears in the ad, he had to share the spotlight with Samba, their beloved 15-year-old collie-cross, who passed away not too long after her star turn.

A true Cockney royalist, Megan’s grandmother Sarah Hood was chuffed when an envelope from the Queen arrived. The congratulatory letter added one more page to her 100-year-old story. Sarah (Sally to most, as her parents had peculiarly named two of their seven children Sarah) passed away
in 2016 aged 100.

“My grandmother survived two world wars, so it was instilled in her never to throw anything away,” says Megan. “She believed in good-quality materials. I still have her Lux dish-liquid bottle that she used for over 40 years. She loved collecting and finding things. 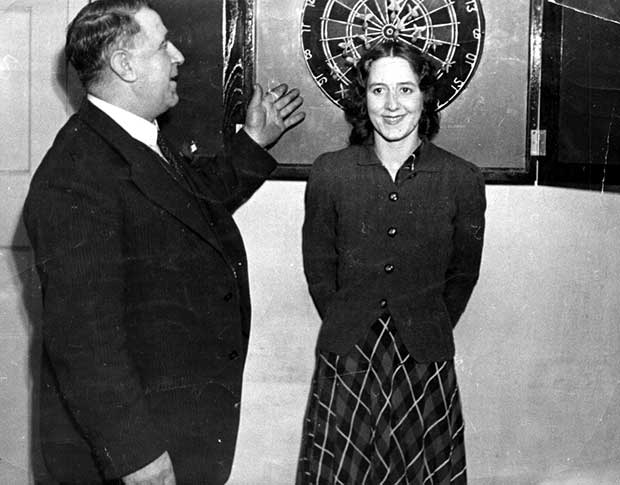 “I remember walking with her along the streets of Whakatane and finding two gold sovereigns in the gutter. After they went unclaimed at the police station,  I then had to hand one over to my brother.”

Memories of Sarah are sprinkled throughout Megan’s home, but two are particularly treasured: Sarah’s bullet-casing lipstick from the 1920s sits on a dresser in Megan’s studio, the other is a black-and-white photograph of Sarah as a “sales assistant” that hangs on the wall of the lounge.

“Her father’s company was one of the first in Britain to produce dartboards. It was a huge business before being turned into a weapons factory during the war.

“During demonstrations, she would stand side on in front of the dartboard with a cigarette held firmly in her mouth, as her father impaled it straight into
the bullseye.

“She was a character, and my biggest inspiration.”