What to sow in the garden in August 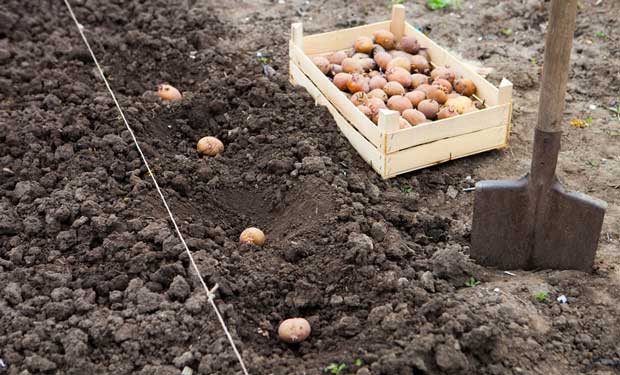 The wind-up to spring planting is starting, and one big decision is going to have year-long repercussions.

It’s time in many parts of NZ to plant seed potatoes or purchase certified seed potatoes. But the variety or varieties to choose are going to depend on how you like to eat them. Your options include:

• If you’d like to try something a little different, have a look at the wonderful heirloom potato varieties available by mail order nationwide at from the Koanga Institute.
• Plant out asparagus, strawberries and rhubarb – consider planting them throughout the garden, to create a more biodiverse garden and avoid build-ups of pest insects.
• If you think you need fertiliser but want to be as organic as possible, the organic experts at Lincoln University’s Biological Husbandry Unit (BHU) advise shying away from high available phosphorus and nitrogen products. Dig in plenty of compost and measure the pH of your soil before adding lime. Lime is very beneficial when the soil is too acid with a happy medium being a pH of around 6.0-6.6 for most New Zealand soils.
• Lift and divide perennial herbs such as chives and tarragon. Plant new herb plants in garden or pots.

WHAT TO SOW AND PLANT OUT IN AUGUST

While you can’t beat a good soil test by a reputable company, you can do your own field tests to confirm good biological activity in your soil.

1. Smell
The more fertile a soil, the higher the amount of actinomycetes and the stronger the musty/earthy smell. It is unclear how reliable this observation can be for comparing soils but may be useful in comparing two treatments. As yet, no gas chromatography work (or probably even panel assessment) has been carried out to quantitatively compare such samples. Another aspect of soil smell is to test that the soil is not too sour (low pH due to unbalanced organic acids), and this can be quantitatively assessed by soil pH measurement.
2. Friability
The friability of a soil is a good sign (and cause) of the level of soil biological activity. The soil should feel nice and crumbly due to good aggregate structure.
3. Colour
Generally as a soil improves under good management, its colour should darken due to the increased formation of dark brown to black soil humus. Earthworm activity in the subsoil can also be seen as the old worm burrows fill in with dark stable humus-soil particles.
4. Earthworm Counts and ID
An easily quantifiable method of assessing the health of soil ecology is to count and identify the earthworms present. It is mostly the case of the more the better and some species (eg A. caliginosa) are better indicators of good soil conditions than others. Care in interpretation would include the effect of time of sampling and temporary soil conditions as these will affect counts. Counts can be made of smaller soil animals but this becomes more of a laboratory job due to the size or the organisms.
5. Litter Decomposition
Perhaps the most direct assessment of a soil ecology’s health is to test the rate at which litter is decomposed. This can be done by field observation of length of time for “above ground” or incorporated crop residues to “vanish.