The ‘super-raspberry’: How to use Japanese wineberries 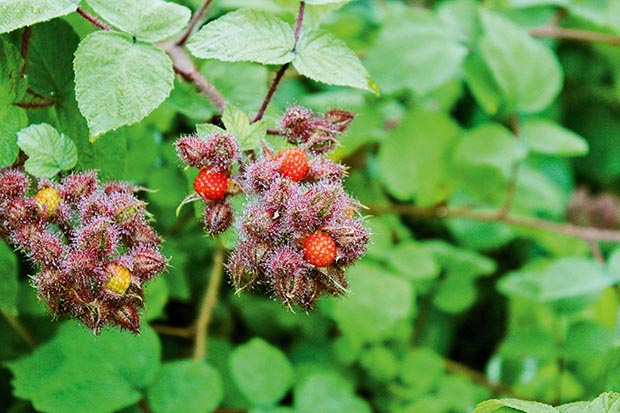 Don’t be afraid of trying new fruits, especially ones as delicious as this.

There’s no need to be scared of fruit. Some of the best fruits I have ever tasted were bizarre lumpy red knobbly things from busy market stalls in Asian cities. I recently ate my first Japanese wineberries (also known as the Raspberry Bush). Its Latin name, Rubus phoenicolasius, means red-haired from the attractive hairy, sticky calyxes surrounding the raspberry-like fruit.

It’s an attractive ornamental in its own right, but the blackberry-like vines in summer carry simultaneously the orange unripe fruit, the ripe red berries, and yellow star shapes where berries have been picked. The fruit taste just like a sweet raspberry but are shinier and more orange. I call it a “super-raspberry”.

I was surprised not to have seen or heard of it before, but it appears to be rare outside of its native lands in northern China, Korea, Japan and good old Missouri USA, where it is known as a weed.

HOW TO USE JAPANESE WINEBERRIES

The berries are particularly delicious to graze on in the garden so very few will ever make it as far as your kitchen. If you manage to gather a cupful, prepare as for raspberries. Serve as a fresh dessert with strawberries, currants and cream, or best of all, in a mix with ripe blackberries in late summer. 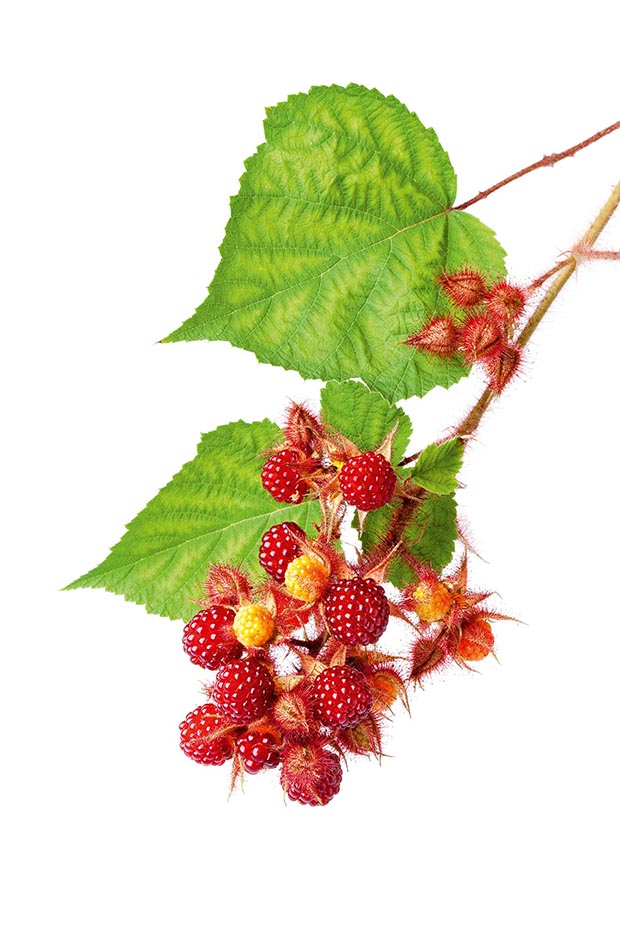 The shiny berries also make a delicious and attractive cake decoration.  The wine made from the berries is supposedly an aid to slimming (possibly because you wouldn’t even need food, now would you?). The fruits are also anti-inflammatory, and high in vitamin C.

It is no more difficult to grow than a raspberry, to which it is closely related.

1. This vigorous deciduous shrub can grow to 2.5-3m tall in full sun, or at least somewhere warm, even better in part shade or up a wall (facing north).

2. Don’t be fooled – it is also very hardy so I suggest experimenters be less timid with it, since it will also take temperatures down to -8°C and a foot of snow.

3. Water the vines well in summer to plump up the lovely berries.

4. Weed the plot and add manure in spring, cutting out old growth as with raspberries. They like lime.

5. They are very healthy and vigorous, free of the usual raspberry pests and a very abundant biennial cropper, growing canes the first year and fruit the second.

6. You can propagate Japanese wineberries by layering tips and digging them up when roots form. Unfortunately it can also self-layer and “wander off” like blackberry, so keep it trained and tamed along an espalier wire.

7. Cut back tips after fruiting to prevent them heading off country-wide in their seven league boots. This plant is a common weed along roadsides in cooler north-east America where it was introduced for breeding raspberry stocks, but like all Rubus types, if you cut them back they will not invade your garden. Anyway, I believe we have worse things to fear invading the landscape so don’t waste time being scared of rampaging berryfruit!