Is the Swedish Vallhund the ultimate Kiwi dog? 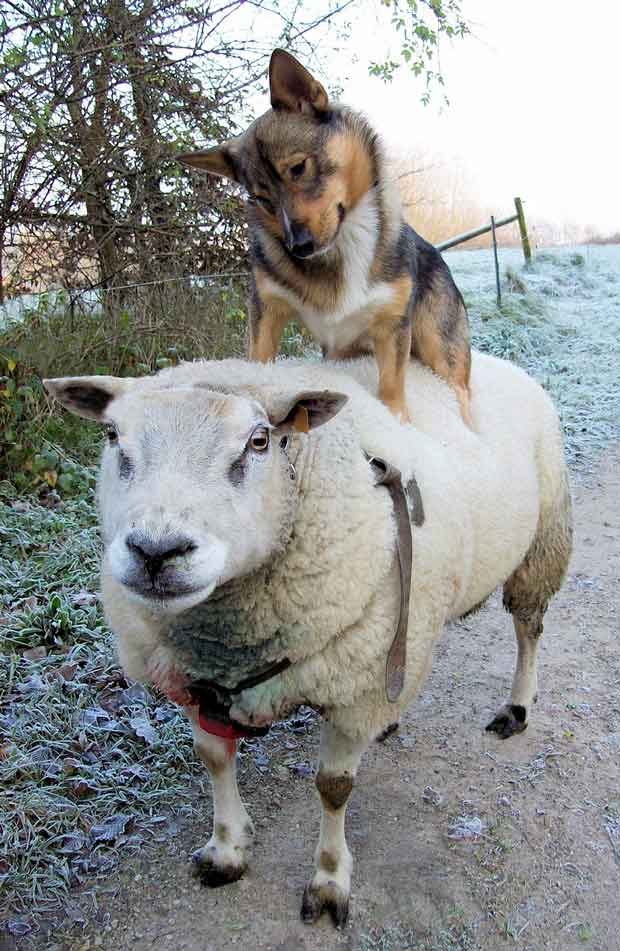 The Swedish Vallhund is a lot of dog for a small block.

Jenise and Bryan Moyle farm cattle on 64ha near Whangarei. Their Vallhund dog Zac was purchased as a family pet and enjoyed all those privileges, but was eventually titled “Assistant Cattle Shifter.” He earned it even though the Moyles already had two cattle dogs.

“Zac really enjoyed his job,” says Jenise. “He was always the first up onto the farm bike, barking if we were slow to get organised. He wasn’t afraid of working big cattle, especially the bulls where he loved to get in and bite heels – being small he was able to get in underneath the often-resulting kick. Bullfights were his speciality and with no fear whatsoever, he got in to break up any fights.”

My own experience with a Vallhund on a lifestyle block also proved successful in all aspects. I’ve always believed in having an old dog/young dog scenario and my aim was to replicate Duffy who had been an absolute star for over 13 years.

This was no mean feat since Duffy’s breeding was unplanned – Jack Russell mother/large collie working dog father – but he was, as I discovered over time, the perfect lifestyle block dog. He was brave enough to work any livestock including horses, a great guard dog, and yet about the size of a corgi, so small enough to come inside and be the family pet as well.

It was while reading this magazine in late 2000 that I came across an advert from Swedish Vallhund breeder Rose Madsen. It described Duffy to a tee and I realised he wasn’t the one-off dog I’d always thought he was. My search for his eventual successor was over. 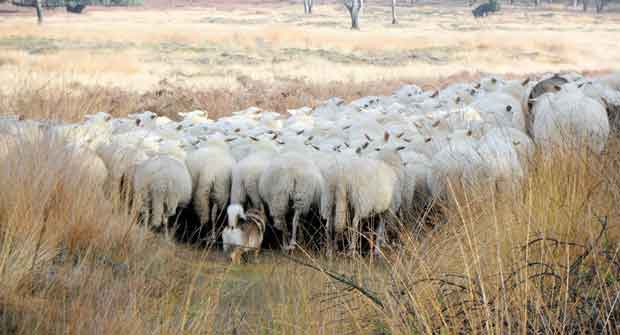 Rose was bringing some of her Vallhunds from Mangawhai to Hamilton for a show so I arranged to view them. I fell in love on the spot and ordered a male puppy with four white socks, blaze, ruff and a tip on his tail, similar colours to Duffy but in grey and white. Valkrista Nile (Gus) was born in January 2001 and turned out to be my dream dog.
One of my first experiences with a Vallhund’s determination to work came when Gus was only eight weeks old.

He watched Duffy help me to lunge a horse and joined in after a few rounds of careful observation. Trying to protect the precious pup from being run over by a fast Thoroughbred, I tried to stop Gus but no way was he having that.

He knew exactly what to do and became Duffy’s second in command straight away. I needlessly got grey hairs and it was a reminder that by six months of age it’s as if they’ve already been to university and got a degree.

Gus could fit out the cat door when he was a puppy and used to head off down the farm with The Cat when Duffy and I were being too boring and watching television. Their mission together, apparently, was to evict the wildcats which happened to like our hay barn.Gus would watch TV though – he loved the greyhound races.

He tried for three years to beat Duffy when they were racing on the farm. The day he actually did was very funny – Gus discovered WINNING! Duffy semi-retired that day and relinquished guard dog duties as well, leaving Gus to be the defender of property, livestock and his family. He didn’t fit out the cat door by that stage and became more content to watch TV. He’d seen The Cat curl up on my knee so Gus also took over the role of lap-cat from then on, much to the disgust of The Cat.
The affinity a Vallhund has with other animals on a block is astonishing at times. To see Gus racing through the house with The Cat was truly hilarious, but he would also sit out in the paddock in the shade of a horse, or quietly move around with the sheep and cattle. They weren’t all considered ‘friends’ but just meekly did as they were told.
There was no vermin on the property either: no rabbits, rats, mice or unwanted birds. “Stay off my land” seemed to be Gus’ slogan.
Another thing I discovered was that the Swedish Vallhund has an incredible sense of humour. If you laugh at something, they will perform this feat again and again just to hear you laugh. Ever the clown, Gus would “sit-up-nice” just to humour visitors, and he loved to play hide and seek.

Most Vallhund owners will tell you of their dog’s special language – known as ‘argle-bargle’ – and it’s quite a vocabulary. I’ll never forget the way Gus used to look me directly in the eye and yawn and sigh at the same time. This was a ‘hurry-up’ for me to get outside and do things if life was too boring inside.

One car got special attention from Gus each school morning as the child inside would lean out the window yelling “go doggie” as he raced them along the roadside boundary fence.
Gus was also a natural sticky-beak. ‘Supervisor’ would have been a great title for him as nothing escaped his notice. Nothing.
His breeder, Rose Madsen, liked to call her first male stud dog (Steppenwolf Zip) a “heritage working dog” and was adept at describing his abilities with cattle. She wrote how at five months of age, he would see off 17 two-year-old steers that intruded onto ‘his’ property. 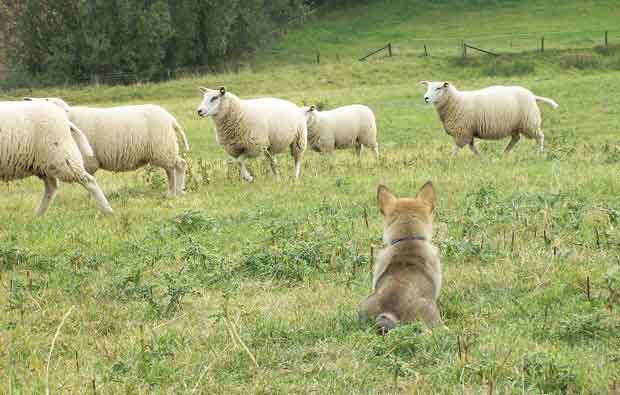 “At first we had no boundary fence on our new block and his purposeful barking soon got those steers moving towards their own place. Zip was never satisfied until they were right off his patch and across the drainage creek on the boundary.

His modus operandi, once he got them on the move, was to run up so close that he was actually running inside the rear legs of his chosen target. The steers seemed to find this quite terrifying, but in spite of flying heels, they were never able to connect with his little body. Just a little dog but with a big spirit and chockfull of his ancient herding genes.”
I love taking part in dog shows, but Gus didn’t and was only shown to make him up to a Champion, and also show the public what a handsome dog he was. He attracted fans like a magnet – “what a beautiful little dog” we’d hear repeatedly – but Gus was never as comfortable at shows as he was when at home in his natural surroundings, working and doing all the things a Vallhund is proud to call its legacy.

“A charming, intelligent, athletic little watchdog, friend, working dog and bed warmer,” wrote Rose Madsen. “Well skilled in the ways of the modern world who adapts as easily to home comforts as he does to life on the farm.
“Designer dog for the Kiwi lifestyle, I salute you!” 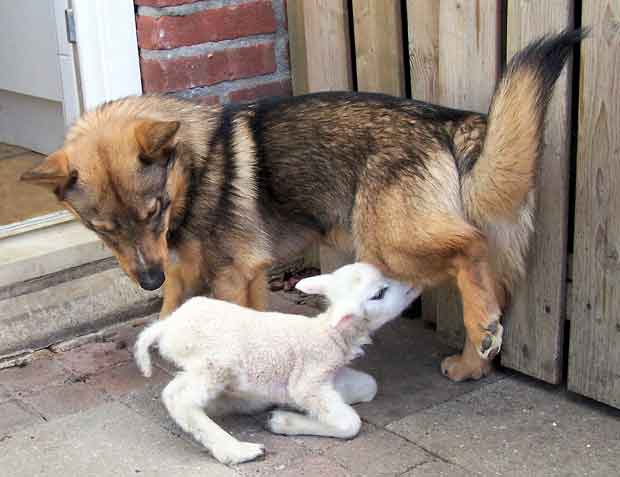 SWEDISH VALLHUND 101
(Swedish for herding or pasturing dog, pronounced val-HUND)
Size: 9-14 kg
Adult height: 30-33cm
Coat: short to medium length
The Swedish Vallhund is a small, powerful, fearless breed of dog that has been kept for centuries, originally in Sweden, as a farm dog for
herding cattle and sheep.

They were then known as the Swedish Herding Dog, Vasgotaspets or Swedish Cattle Dog, but are now a rare breed due to changing farming methods which left them nearly extinct by the 1940s.
A dedicated group formed to save them and today you’d think it’s a dog specially bred for the lifestyle block owner. They are still used in Sweden as a herder and by the Swedish Army as search and rescue and patrol dogs.

Such is the Vallhund’s versatility and mental aptitude there’s almost no job beyond them except feeding and bathing the family. They will though, if given free rein, supervise children to bed and will not go to sleep until the last member of their pack is safely tucked up and snoring, such is a Vallhund’s total devotion to ‘their’ clan.

If you are used to and like a dog that spends time on its own, prefers to sleep outside in its own space, heads off during and after work, doesn’t guard the property and sheds hair all over the place while drooling and standing heavily on your foot, then don’t get a Vallhund! They will want to spend all day with you, no matter what the chores or destination.

They have often been referred to as ‘The Grey Nurse’, such is their concern if anyone, including other animals, has been hurt or injured. They want to help and will tend to the injury if no other help is forthcoming.

Lesley and Ian Gray were some of the initial Vallhund enthusiasts in NZ. They believe the first ones came into the country in 1978 via a breeder in Tauranga. When Lesley and Ian retired, they took up obedience, agility and tracking with their Vallhunds.

Lesley would use the word “responsible” a lot when describing her dogs and it is a trait of the breed. They finish a job and do it to the best
of their ability.
“Vallhunds are steady workers and they keep on working – they don’t give in.”

For more information Visit Västgötaspets
The website is for New Zealand and Australian owners of pet Swedish Vallhunds.