The benefits of tree lucerne: Attracting bees and distracting the birds in your orchard It doesn’t bear fruit, but this little tree will vastly improve your orchard’s productivity.

This article first appeared in the January 2013 issue of NZ Lifestyle Block.

Tagasaste (tag-a-sars-tay) grows very fast in NZ and flowers in late winter when there are few other nectar sources for wildlife. The great froth of bright white blossoms helps to feed bees at a time when there’s not much in flower, plus they attract bellbirds and are a favourite of native pigeons (kereru or kuku) which love the blossoms and nectar.

Tree lucerne also flowers just before the stonefruit blossoms. The theory is the pigeons will be happily munching the tree lucerne flowers just as your valuable peach, almond, apricot, and plum blossoms are swelling and getting pollinated for a bumper summer crop. Pigeons are well known for doing lots of damage to fruit blossoms if unchecked, stripping the branches and chomping the flowers like lollies. Even after your tree lucerne blossom fades, the pigeons may stay and feast on apple, pear or other later blossoms. It’s fair to say that they can pre-thin a crop though, so who knows, perhaps they are helping to produce a better result in the end. 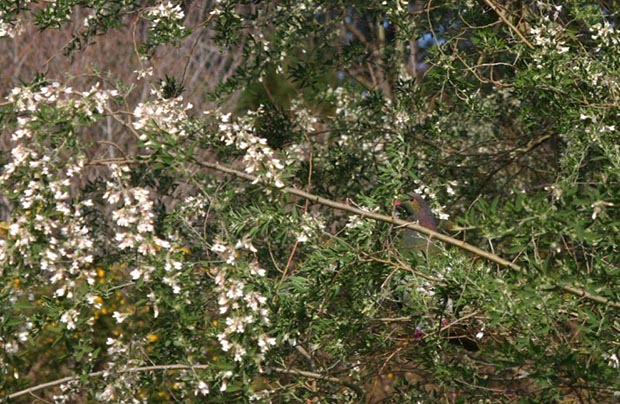 There is debate as to whether growing tree lucerne will attract more pigeons into the orchard to eat more plum blossoms, or whether the tree lucerne flowers will keep them all happy, allowing the fruit blossoms to grow. Some people tie string in the branches to deter pigeons. You’re not allowed to shoot them. They look wonderful with their dashing colours shimmering like silken cloaks as they do upside-down acrobatics from the bloom-covered branches. Their flight is very noisy and dramatic with great swoops so they are fun to watch too.

Tagasaste has adapted well to cooler and moister sites in New Zealand and seed selections have made it hardier. It won’t tolerate wet feet, tending to blow over and rot. It prefers well-drained soil or sand or a mound to grow on. It will grow very fast into a small broad tree, made stronger by topping back one metre when it is 2m tall. This stops that very bowed over, floppy look which comes from growing too fast. It’s a great orchard shelter if you keep the sides trimmed.

Like all legumes, including gorse and broom, tree lucerne makes very hot burning firewood, hotter than gum or pine. Its small size is handy for cutting slim logs from the branches or topping the trees to make more branches.

They’re generally short-lived – about 10 years – but in that time they can grow remarkably big to a bush about 4m tall.

The branches are good fodder for stock and were promoted by the Tree Crops Association in the 1970s. Like willow, the branches can be cut in drought and fed out to livestock.

ABOUT BEN
Ben Gaia grows trees for wood and fruit in extreme climate areas of the west coast of the South Island and runs an organic nursery, www.dialatree.co.nz.