US compost-maker Karl Hammer runs a grain-free flock that works hard for a living.

Peek through the door of the large, cosy laying shed at the Vermont Compost Company, 300km north-west of Boston in the US state of Maine, and you’re in for a big surprise.

There are rows of wooden nest boxes for the free-range hens and large dishes of fresh water on the straw-strewn floor. Shiny-feathered birds wander in to lay, then wander back out.

But there’s no feed or feeders. Instead, Karl Hammer’s flock of 1200 roosters, hens, and chicks feed exclusively on the mountains of rotting plant and food matter piled around the yard of his commercial composting business. The compost piles contain food scraps collected from local restaurants and cafes, animal manure, bark, woodchips, leaves, and spoiled crops such as rotten hay, and grass.

Karl started with 200 chickens, mixing grain into the food scraps, but says he quickly found the birds didn’t need it. “The goal was to produce eggs without grain inputs,” he told Australian permaculture expert Geoff Lawton back in 2013. “They do get a certain amount of grains because there’s bread, pasta, cereal, in (the compost), but they’re mostly eating lots of biota.”

That includes worms, crickets and other bugs, beetles, slugs, snails, and insect pupae that live in the compost. “(The windrows) have to generate enough heat to melt the snow and ice through winter, and the hens form terraces along them. They sit there and weed through it. We’ve even seen them eating fungal mycelium, pulling long strands out.”

More stories you might like:
Why the Red Devon is a smart cattle breed for beginners and lifestyle block owners 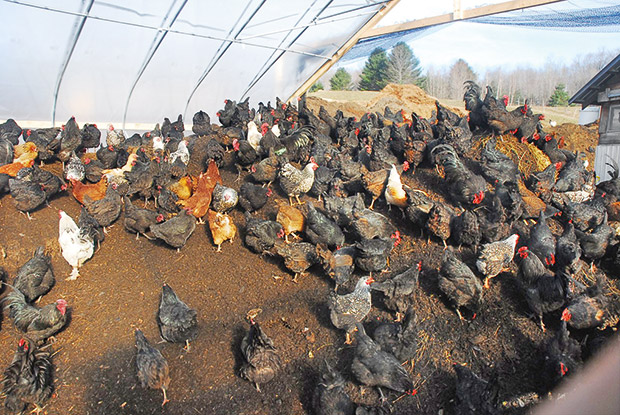 The compost gets the bonus of poultry manure, feathers, pest and insect control, and constant churning by the birds as they scratch through it.
Karl says his flock prefers to forage on the hot, newly formed windrows. Once the composting process is almost over, the birds aren’t interested in it and move on. That works well for his business, greatly reducing the risk of contamination from diseases such as salmonella.

His company produces several types of organic potting mix and compost, used by over 500 organic growing companies around the US. There are no fences to stop the flock straying into the surrounding fields and forests. Karl calls it a ‘free to leave’ system.

“But this is where they like to be; these chickens have a pretty good deal.”

There are foxes and other predators that can enter the farm, but Karl says thanks to the roosters, and three dogs, they don’t have a problem. “We’ve learned a lot about using roosters as primary predator protection – if you don’t have to buy grain, you can afford roosters.”

The flock consists of large breeds weighing around 3-4kg, mostly Light Brahmas and Black Australorps, which Karl says tend to scratch harder and deeper. The laying hens produce about 1000 eggs per month, depending on the time of year.

“They come out of the house and earn their living. They go out and feed, they dust bathe, they socialise. They’re incredible animals.”