Philippe Arregui is winning the hearts of New Zealanders one gourmet sausage at a time.

Growing up in French Basque country, Philippe Arregui learned the art of spin. His first job was chatting up tourists, with the aim of selling them sausages coiled in a frisbee. “The idea was that they would eat the sausage from the frisbee and then play a game,” says Philippe. “It was a bit of fun, but I loved sharing the flavours with new people.”

Forty years later, on the other side of the world, Philippe’s now walking the talk, making artisan sausages at Auckland-based charcuterie, L’Authentique. While many Kiwis consider sausages a cheap-and-easy barbecue crowd-pleaser, Philippe places them on a pedestal and believes some New Zealand-made sausages are just shy of blasphemous. A good sausage is an art form, he says, and should be cooked with the same respect as steak.

Given the quality meat and produce on our doorstep, some of our sausage-making techniques have Philippe reeling, such as filling them with offal and breadcrumbs.

“Sausage inside baguette is a beautiful way to eat it, but the bread belongs outside the sausage, not inside,” he says. And we also cook them incorrectly. Sausages must be seared, then cooked on a low heat, but Kiwis have a habit of cooking them until they’re “petrified”. Zut alors! Philippe’s advice? “Don’t stick a fork in them, it drains the fat, and they become too dry.”

Then there’s our habit of drowning sausages in tomato sauce. Wrong. “The flavour should be in the sausage. You don’t need sauce – maybe just a little mustard.” 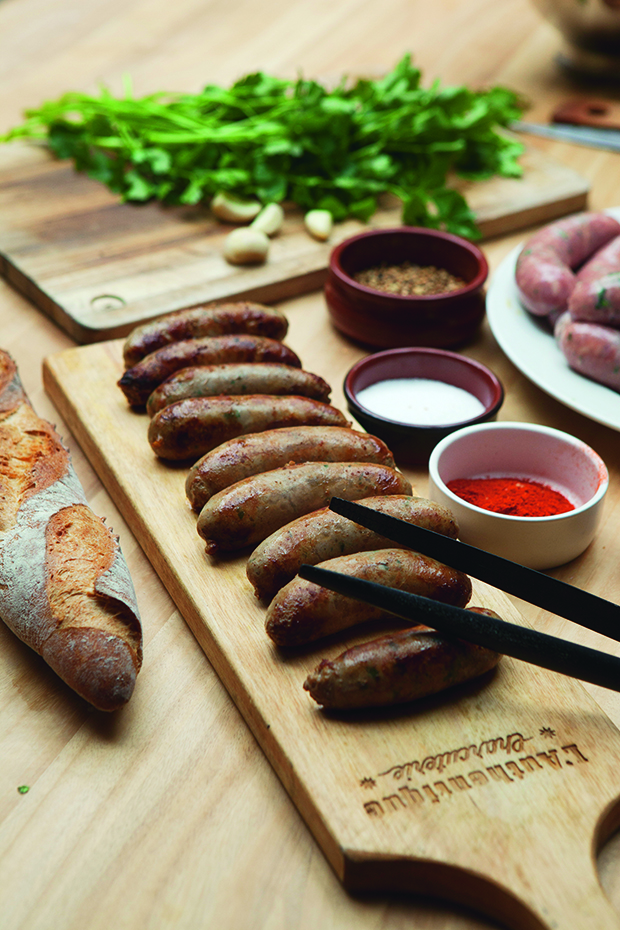 Philippe’s respect for the banger runs deep: he’s a third-generation charcutier. He has a black-and-white photograph of his grandfather draining the blood from a pig to make black pudding, a cigarette dangled from his mouth. He would go from house to house in his village butchering backyard pigs and making food from all parts of the animal.

“It’s hard for people to understand here in New Zealand, but before and during the Second World War, people in Europe were starving. They needed to grow animals at home and make the most of everything. I always remember this,” says Philippe, who is able to twist and turn sausage links with the deft, theatrical touch of a circus juggler.

Despite his rich heritage, Philippe arrived in New Zealand in 2010 with his young family, seeking a simpler lifestyle. “I was having a mid-life crisis. I wasn’t very satisfied with my life in France and with the way Europe was headed, and I wanted to show to my children a safe, kind place to live, like how I felt in Basque country when I was young. I am very thankful to be here.”

Although he’s keen to educate Kiwis about the art of charcuterie, there’s a lot New Zealand has to teach him, too. “Sometimes I’m a little too French for my own good. New Zealanders are an optimistic people – in France if someone helps you with something, you think, ‘Where’s the trap?’ I am still learning to see that the  glass is half full.”