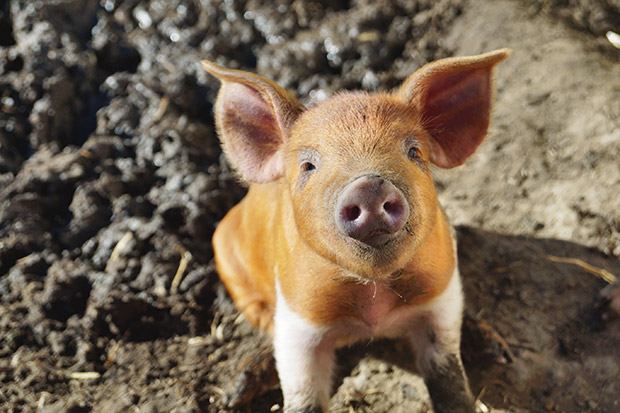 Meet a couple who love bacon so much, they left town to go pig farming.

Bacon’s heady scent is liable to cause even the staunchest of vegetarians to salivate. Calvin and Catherine Payne went the whole hog and completely changed their lives for the love of pigs.

They moved to New Zealand from the UK with their three children back in 2008. After the disruption of the Christchurch earthquakes in 2010-2011, which involved several more moves, Calvin and Catherine eventually found themselves in Fendalton.

“We decided we didn’t want to be empty nesters,” says Calvin. “And there was one thing we’d missed since moving to New Zealand – really good bacon – so we decided to buy a 10-acre block and grow our own.” The Payne family (from left) Tom, Sam, Calvin, Catherine, and Becky, with Ebony the Labrador.

They searched throughout Canterbury, finally stumbling across a property that was a perfect fit, 20 minutes from Christchurch.

“Catherine and I wanted a nice old house on 10 acres, but you just can’t find them. Then this came up with an old, unfinished house which had been moved from Merivale in 2001. It was all open walls and a mess, but just beautiful. I remember standing there on a Sunday afternoon looking back at this house and saying, ‘I’m taking tomorrow off, and I’m going to buy this,’ and we did.”

Calvin works in construction and set to work making their new home liveable as quickly as possible. Putting their mark on the place was important, but so was preserving heritage features where possible. Calvin with Shiraz and then-piglets Whisky and Rum.

“It’s still got (number) 23 Aikmans – that’s where it came from – on the door. I’ve refused to paint the front door because it just looks so cool.”

The rest of the property was well-appointed with mature gardens, fencing, a garage, some animal housing, and shelterbelts. A smile from Pinot.

“My father worked on the land all his life,” says Calvin. “But me and my wife had never done anything like this in our lives before; all we’ve had were dogs and cats. We just decided we’d give it a go because this had everything set up, even water reticulation.”

The first pig to arrive was Pip, a Kunekune. “She was our original,” says Calvin. “We had a boar, Johnno, who we’ve just sold, and we’ve got another boar in, a younger one to breed from. We sell them as pets… I’ve had people come around for something else, and as soon as they see them, they’ll stop, then buy one on the way out. It’s so funny.” 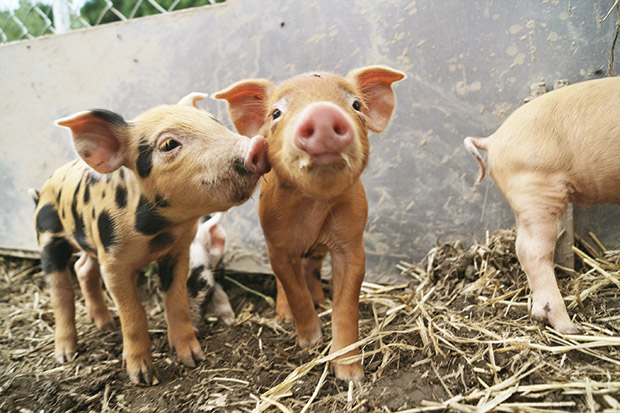 Two piglets from a litter of 14.

Catherine loves pigs. She comes from Devon, so a couple of Devon pigs (also known as Large Blacks) was an obvious step. When they grew to over 90kg, she felt they’d become too big to look after. It was time to try homekill.

More stories you might like:
From yolk to shell: The curious process of how a hen produces an egg

The first taste of their home-grown bacon was so delicious, they decided to ramp things up and share it with others. Four years and 186 piglets later, they now breed Berkshire, Tamworth, Wessex Saddleback, Duroc, and their cherished Kunekune.

Their maternity suites have a farrowing rail around the inside to help prevent piglets from being squashed by their mother. There’s also a small ‘crèche’ at the back, a separate room the piglets can access, but the sow can’t. 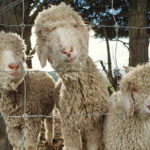 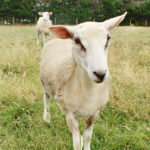 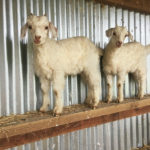 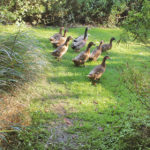 “The piglets all go in there and huddle up together,” says Calvin. “When they’re in the womb they’re all together, and when they come out, they can stay together. They all cuddle up in there, mum’s happy, and when they want feeding, they come out. We’ve found it works very well.”

The farm isn’t certified organic, but Catherine keeps a close eye on the animal feed and pasture management. Their fertiliser is a natural seaweed-based product.

“With chemicals and nitrates, you have to keep your animals off the land for weeks,” she says. “And you have to make sure you have some decent rain, so it gets washed down into the soil.”

Instead, they use trace element-rich seaweed powder, after their neighbour reported great results trialling it on her hay crop. They mix it with water and spray it onto the pasture; stock can go back onto the grass immediately. Calvin admits it can be challenging to manage the land naturally. 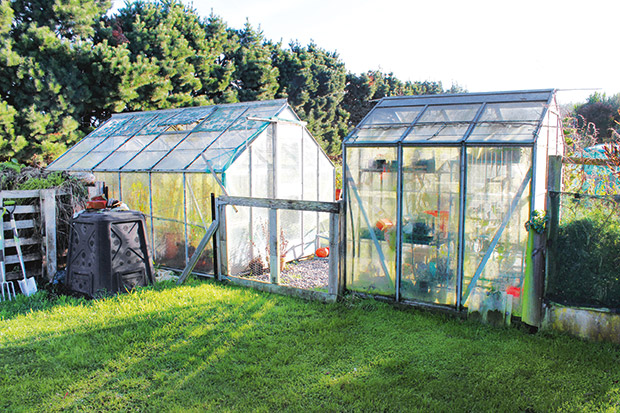 “We keep a rotation going with sheep, cattle, and goats to help keep the parasite levels down. That’s always the objective, to just do it naturally.”

They have an occasional stall at a local market to sell their pork products, but often don’t have enough to sell. A core base of regular buyers – Calvin’s work associates and locals – keep his phone pinging with requests, especially for Christmas hams. “You need hundreds of animals to make any money,” adds Calvin. “It’s really just to pay for itself and get some good food for us while knowing what’s gone into it.”

Calvin and Catherine care deeply about their animals, but they have learned to compartmentalise their love. That’s so they can deal with sending a chosen few to the abattoir. “We do name them all,” says Catherine. “But the ones bred for pork, we tend to distance ourselves from. There are our special ones, the ones we breed from who we form closer relationships with. They get an extra scratch and more attention.”

“You can tell the pork animals,” says Calvin. “Including the piglets, we’ve got 40 pigs here at the moment. They don’t get to know us in the same way, so they aren’t as friendly.” Calvin says they’re still learning, even after all this time. “Learning how to take care of all these animals – well, we’re still learning right now, even today. This is (Catherine’s) full-time job, doing most of the research while I do the pipes and wires work.

“I just love making my own bacon, and the fact that we can share it gives us great satisfaction.”

Catherine is passionate about using everything from their land, and that includes her pigs once they’re butchered. Her one difficulty is using the heads. After knowing them by name, feeding, and caring for them, the faces are just too familiar.

They’ve recently bought in another Berkshire boar, Charles (whose previous girlfriends were Camilla and Diana). He’s now with Betty, Ethel, and their mother Shiraz, who has produced Berkshire/Tamworth crosses.

“When you cross a Tamworth, which is ginger, with a pure Berkshire, its offspring is ginger all over with black spots,” says Calvin. “They’re known as a ‘plum puddings’’.” 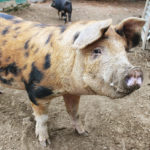 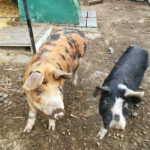 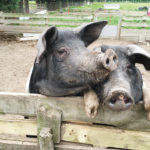 Calvin and Catherine are delighted with their latest plum pudding, Whiskey. At just a few months old, Whiskey is already developing into a fine-looking boar. His future is bright as he’ll become one of their new breeding stock. As members of the Pig Breeders Association, they’ll take Whiskey to compete in the next A&P show against some of the region’s finest animals.

More stories you might like:
What is freeze-dried honey? Meet the Chatham Islands apiculturists turning their liquid gold into meringue-like chunks

Elsie, a young Kunekune, is the current superstar of the farm. She won the Supreme Champion Kunekune award
at the Christchurch A&P show, judged and awarded her ribbon by Ken and Ken (aka the Topp Twins), and also briefly appeared on TV. The fame went to her head, says Calvin. She escaped her pen, causing havoc among the A&P crowd and other competitors. 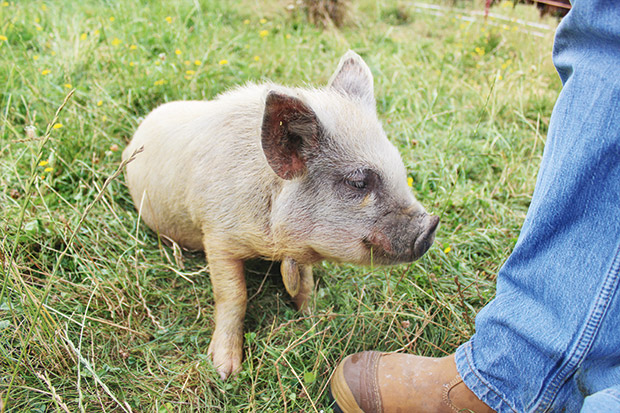 A young Elsie, before she became a champion.

“Catherine finally caught her, and Elsie started screaming the place down. Then about 60 boars started jumping around in their pens and screaming too. She caused the most fuss of all the animals there.”

While bacon has always been the driving force behind their endeavours, there is another animal that has stolen Calvin and Catherine’s hearts: Highland cattle.

“At the A&P show in 2014 we saw Angela and Layla, a Highland cow mother and calf,” says Calvin. “We really wanted to get some; they were so cute.” The couple didn’t waste any time. “The guy dropped them off on his way home that night.” Breeding Highlands is their latest passion.

Joining the New Zealand Highland Cattle Society meant they were able to buy and sell cattle on their website. The society promotes and supports breeders, keeping bloodlines pure with DNA testing and rigorous record-keeping.

All of the couple’s current Highland stock are full-bloods, which means they have been DNA tested to five generations. They bought a bull, Seaton, from the North Island to get the good genetics they wanted. “It’s mostly lifestylers who want to buy Highland calves,” says Calvin. “All I need to do is put up a picture on Trade Me of a Highland calf, and it goes ballistic.

No Highlands are eaten here. “We’re trying to produce breeding stock; we’re not producing meat with the Highlands.”

WHY THEY HAVEN’T EATEN BERKSHIRE BACON

Their most popular weaners are purebred Berkshires. Affectionately known as ‘the lady’s pig’, they’re a little smaller than some of the other breeds, with white feet, white faces, and a white tip on the tail.

“The only trouble is we haven’t been able to eat any ourselves yet because people keep buying them,” says Calvin. 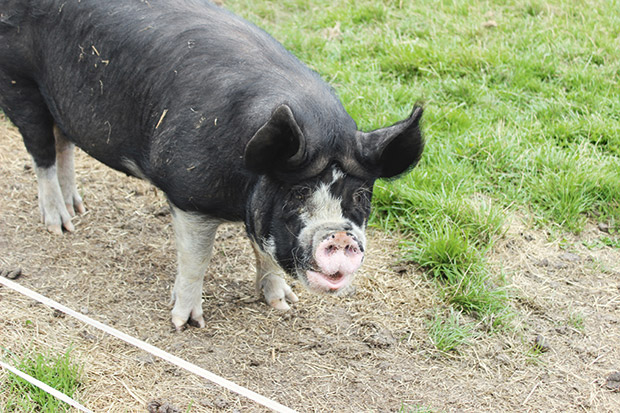 One lady phoned them four months after buying a couple of their Berkshires – Betty and Ethel – asking if Calvin and Catherine would like to buy them back. They were just too lovely, she said, and she couldn’t possibly eat them.

“So we bought them back and I thought, ‘yummy, at last we’re going to get some Berkshire meat’,” says Calvin. “But then Catherine said, ‘Oh, can’t we breed from them? They really are lovely.’

“So we tried and failed to eat them.”