Kellie Hollingsworth wasn’t interested in cars, let alone restoring them. But then a shabby old Toyota stole her heart.

“Mum,” said Kellie Hollingsworth (nee Knight). “Mum, I can’t come to your birthday dinner; I have to keep sanding.”

In the Knight family, Mum’s birthday dinner is not something one decides to skip. When Kellie, a public servant, explained that she had too much sanding to do, it was a simple choice; bring Mum’s birthday dinner to the workshop and join her. And so it was that Kellie looked up wearily from sanding her new car’s old paintwork to find her family — mum Sandra, dad Richard and sister Stacey — trekking into the dusty garage on a warm December evening with pizza and bubbles.

Not only was her mum bringing the party, but she was also prepared to spend her birthday dinner working so her daughter could meet a self-imposed timeline to have her “new” Toyota Corolla KE26 wagon up and running by her wedding day. This is the kind of mum every girl needs; this is the kind of mother-in-law that is the most fabulous dowry of all. Kellie’s husband-to-be, Paul Hollingsworth, must have struggled not to look smug. He got the girl, the car, and in-laws who, even if they didn’t yet understand this love of old-school Toyotas, were still prepared to support the cause. Paul, a mechanic, already had a Toyota Corolla KE25 coupe, one of about 100 still registered in Aotearoa, which he raced at the occasional track day. When he and Kellie met, she wasn’t even sure she was interested in cars.

Paul was passionate about his KE25 and was determined to add another one to the collection for Kellie. He was thinking of either a KE26 wagon or a KE20 sedan, whichever he came across first. Kellie was thinking along the lines of “whatever”, but Paul’s passion for the search was catching, and Kellie began to get just that little bit excited herself.

More stories you might like:
Water cooler talk: Curious cows and what to do with squishy persimmons

And then they found it; not a four-door sedan but a wagon, buried in a shed and needing work. “Excellent!” exclaimed Paul. “Oh, dear”, thought Kellie. “It’s a cool shape”, enthused Paul. “Oh, I dunno”, worried Kellie. But she went along with the purchase of the 1973 Toyota Corolla 1200cc KE26 manual wagon, not least because they found the vehicle in Whitianga, a favourite place of theirs. It is also where they would eventually be married. Kellie had so many fond memories of the town that she decided finding a car tucked away in this place must be meant to be. “Maybe,” she wondered, “did the car find us?” They trailered their find back home to Hamilton, and within a matter of days, it was stripped down to its shell ready to be sent for sandblasting. When the smoothed-out car returned, their friend, a panel beater, found space in his workshop for them to use for as long as it took and it looked, on closer inspection, that it might take quite some time. Paul thought he would like to have it finished so it could be a special part of their wedding day on the beach at Whitianga and so an ambitious deadline was set.

It took Kellie and Paul and a community of helpers almost 11 months to bring this treasure together. As Kellie sanded back its battered old skin, the vehicle got under hers, and she fell in love with it. She finally understood what excited people such as Paul; she finally saw that cars — old cars particularly — are not inanimate. They don’t purr along sweetly and silently on cutting-edge technology, often meaning the driver only has to point its nose in the right direction. Old cars have conversations with their drivers. Their engines mutter and stutter, their gears call for manual attention; they need to be fed and watered. Kellie realized all this and also had a sense of being part of a story — one that began before she was born. She started to feel more like a caretaker than an owner. It felt neat, she says, to help fill out her Corolla’s story, to be part of its history. “Being another owner in that story is cool,” she says.

More stories you might like:
New online tool HomeFit allows New Zealanders to test how warm, dry and safe their houses are

The vehicle still had its service book in which there was a lot of detail. Kellie saw it had been built in 1973 in Thames at the now-defunct Campbell Motor Industries. CMI assembled the first Corollas in this country from April 1968 before — a couple of decades later — it was bought by Toyota New Zealand. The plant is now used by Toyota to refurbish imported used vehicles from Japan. Kellie could see by the service book that her car had had at least two previous owners, although she suspects there might have been a couple more. It still had its original paintwork and was one of just approximately 40 still registered in Aotearoa. It had its original licence plates and its VIN number, which meant she could email Toyota New Zealand in search of its history.

She learned about engines, helped strip back the car, undid the bolts and labeled and bagged them, helped put in pistons and sat on a cold concrete floor late at night with grit in her hair and dirt under her fingernails while her mother poured her bubbly in a paper cup. It helped that they had friends who were motor trimmers and panel beaters and would work late into the night with them. Above all, it was nice to do it shoulder to shoulder with Paul, to get to understand his passion for cars and make that bond. 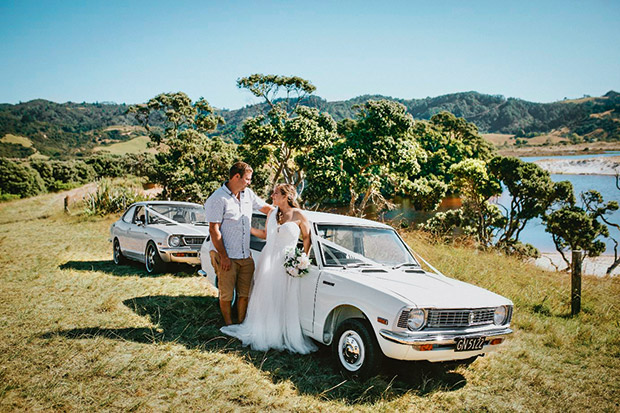 Kellie and Paul on their wedding day.

During the restoration process, the car was skillfully put back together in better-than-new condition with everything either powder-coated, re-zinced, chromed, painted or polished. And then it was finished and just in time for the March 2019 wedding although there were times during the restoration that they wondered if it was going to happen.

The car looked lovely at Paul and Kellie’s beach wedding; it was the icing on the wedding cake, and nearly outshone the bride. And so it should; an awful lot of love went into it. And in time, says Kellie-the-converted, it might be nice to find that sedan and have the whole set.

At present, the Toyota is just an economical weekend car because, admits Kellie, “when you get in you are going nowhere fast”. It is a car for just cruising, for reminding one to slow down and enjoy the scenery en route to The Mount, Raglan and, of course, Whitianga.

Kellie was lucky to find Abbott Brokerage/Star Insurance to cover the car while it was in bits. “It is not easy to find an insurance company that will cover such an old vehicle and, especially, to recognize that part of the car might currently be in bits on the garage floor,” she says.

“They understand that there are spare parts that are not necessarily going to be on the car and that the car could be trailered instead of driven to a destination.” 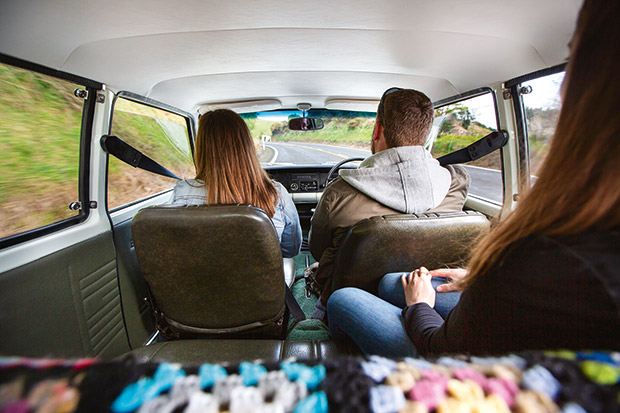 Kellie also learned that classic cars have to be driven in a more hands-on way. For example, the braking in her modern SUV is near instant, whereas in the older Toyota, she had to learn to brake much earlier to stop safely.

Although the lights in the Toyota have bright modern bulbs, they do not light up a wide area the same as today’s vehicles. But this is part of the fun of driving it, she says. “You have to be part of the vehicle, not just sit behind the wheel and steer.”