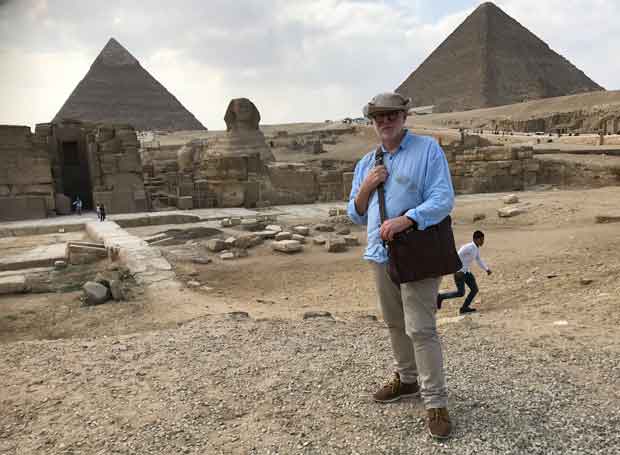 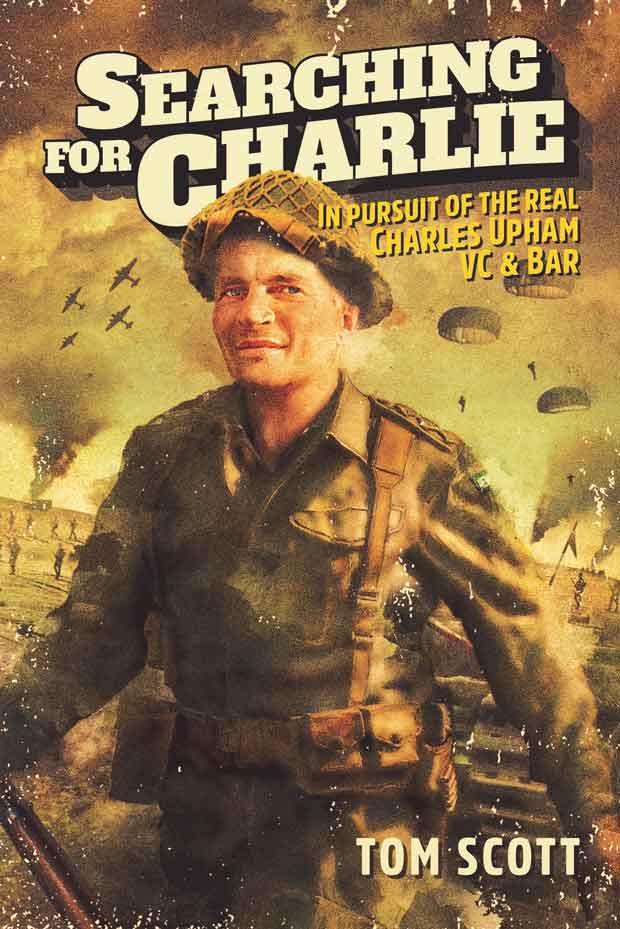 Searching for Charlie: In pursuit of the real Charles Upham VC & Bar
By Tom Scott
Upstart Press $49.99
Available in bookstores and online (upstartpress.co.nz for more information)

“Bloodnok is always rushing into the room exclaiming he’s just come from ‘the very thin of the fray’. So why do men of great courage intrigue me?”

A previous subject, Sir Edmund Hillary, with whom Tom worked and walked in Solukhumbu on the hill trails to Everest, was the subject of 2016 TV miniseries Hillary, written by Tom. He also wrote the documentary about Hillary called A View from the Top. 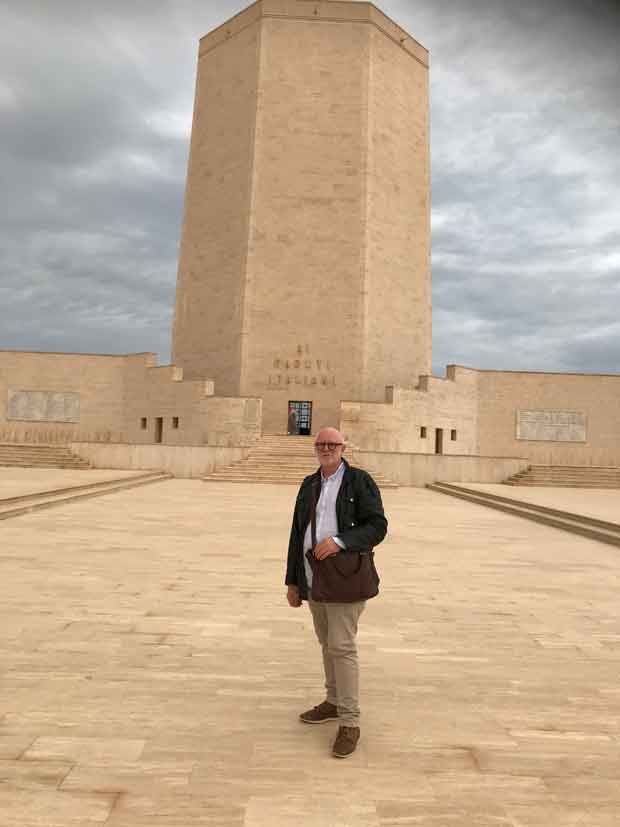 Tom Scott at an Italian war memorial on the Alamein coast.

His latest work is the result of more than a year researching and writing a biography of New Zealand war hero, soldier Charles (Charlie) Hazlitt Upham.

“In my career as a cartoonist,” says Tom. “I have stared down numerous papercuts in the line of duty, so that’s perhaps why men of great courage attract my interest.” 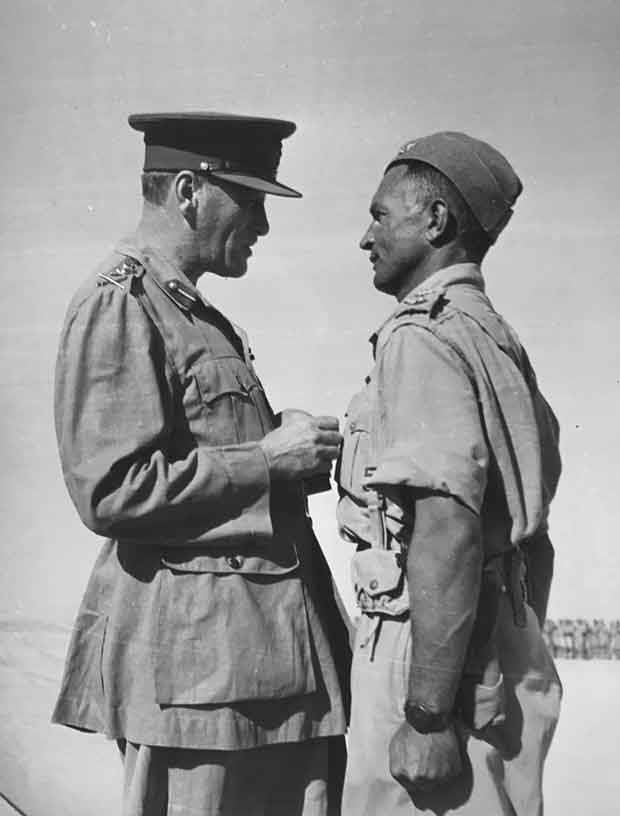 Charlie Upham receives his VC from British General Sir Claude Auchinleck November 1941. He forgot to salute afterwards until he had retreated several paces.

Humour, always self-deprecating, is a much-prized characteristic of a genuine Kiwi bloke along with a healthy dose of understatement. Tom hits the mark with both.

In his younger years, as parliamentary weekly correspondent for The Listener, Tom faced down the hair-trigger rage of a former prime minister of New Zealand, Sir Robert Muldoon. When Muldoon failed to force Tom to bow to his formidable will (and failed to get Tom sacked), he barred Tom from press conferences.

It was a cause celebre as Muldoon could reduce staunch men to jelly. Tom maintained his intestinal fortitude, Muldoon eventually lost an election and Tom lived to fight another day. He laughs at a suggestion it was principled and brave.

“I see myself as more of a coward who often ran the wrong way, and found myself running through enemy lines thinking this is not where I am supposed to be. But you have to keep going and pretend it was deliberate.”

Whatever, Tom. No talking down this latest piece of work, however. It is a magnificent biography of a remarkable Second World War infantryman twice awarded the Commonwealth’s highest recognition of conspicuous gallantry, pre-eminent valour and acts of self-sacrifice under enemy fire, the Victoria Cross. “The high eligibility threshold makes it extraordinarily difficult to win one [VC]. To win two is almost unheard of.” 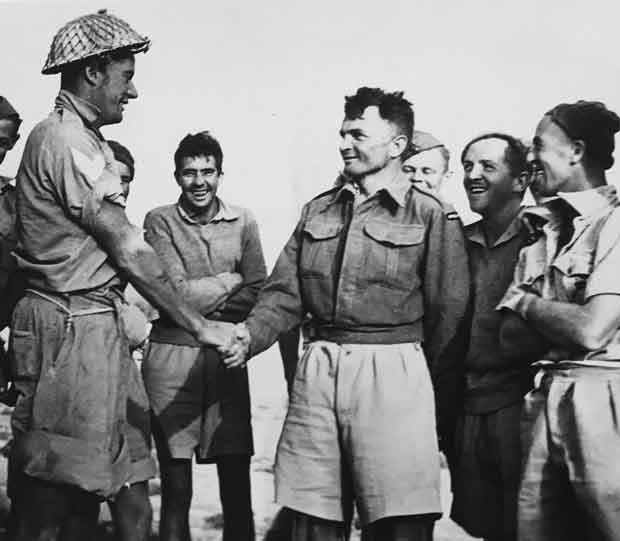 Research swept Tom from the staid streets of (1930s) Christchurch and the musterer’s huts of the South Island to the horrors and heroism of Charlie’s war; the Allied campaigns in Greece and Crete, desert campaigns against Rommel’s Afrika Corps, life-threatening treatment in an Italian military hospital and incarceration in Colditz Castle as a prisoner of war. He makes a convincing case that should valour and gallantry be accurately honoured, Charlie Upham’s chest would have worn more VCs. The last thing the modest man himself wanted; his commanding office once threatened to court-martial Charlie for cowardice if he didn’t front up to journalists for interviews about his first VC.

This wonderful beast of a book generously tells Charlie’s story and stories of many former soldiers, family and friends who Tom met during his research. Tom was seeking “the source of the Nile” trying to get to the heart of that trait known as courage and to identify characteristics that define a Kiwi. 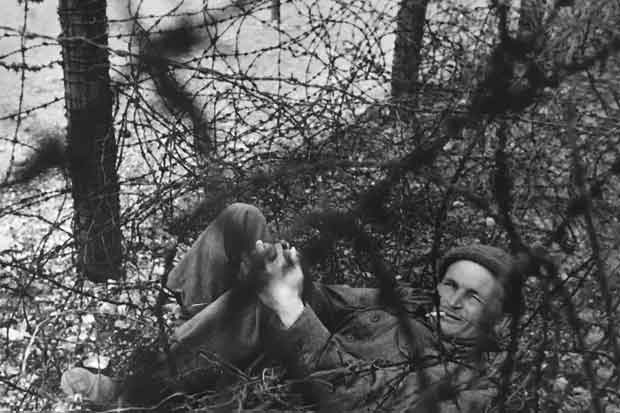 Charlie tangled in coiled barbed wire between the inner and outer fences when his escape bid failed.

“We New Zealanders want to feel that there is something about us, something that sets us apart. I was staggered to learn how highly regarded our soldiers were – by everyone. Rommel [German Field Marshall, the Desert Fox, Erwin Rommel] rated the New Zealand soldiers as the best in the war, British Field Marshall [Bernard] Montgomery was also highly laudatory and Australian war historian Alan Moorehead’s words about the Kiwi soldiers brought tears to my eyes.”

Such was the regard for the extraordinary bravery of Charlie Upham that on his death in 1994 a rare, if not unique, event occurred when his former enemies placed an obituary in a New Zealand newspaper. “One of the bravest and one of the best soldiers – in deep respect… on behalf of the Association of former Afrika Korps, Karl Heinz Boettger (Col. Retd.), Hamburg…” 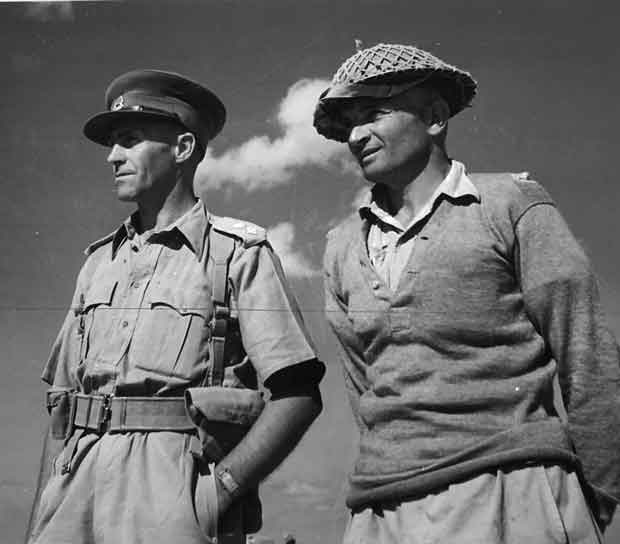 Tom did not find the ‘source of the Nile’, the well from which springs moral and physical courage, but he makes a confident crack at capturing the essence of Kiwi blokedom. Something Charlie possessed in spades.

“There’s that self-deprecating sense of humour, a wry way of looking at life, resilience, never asking someone else to do a job if you could do yourself, being egalitarian and fair-minded, physically strong, not complaining and whinging, quietly getting on with the job, being stoic, good-humoured, patient and resourceful. 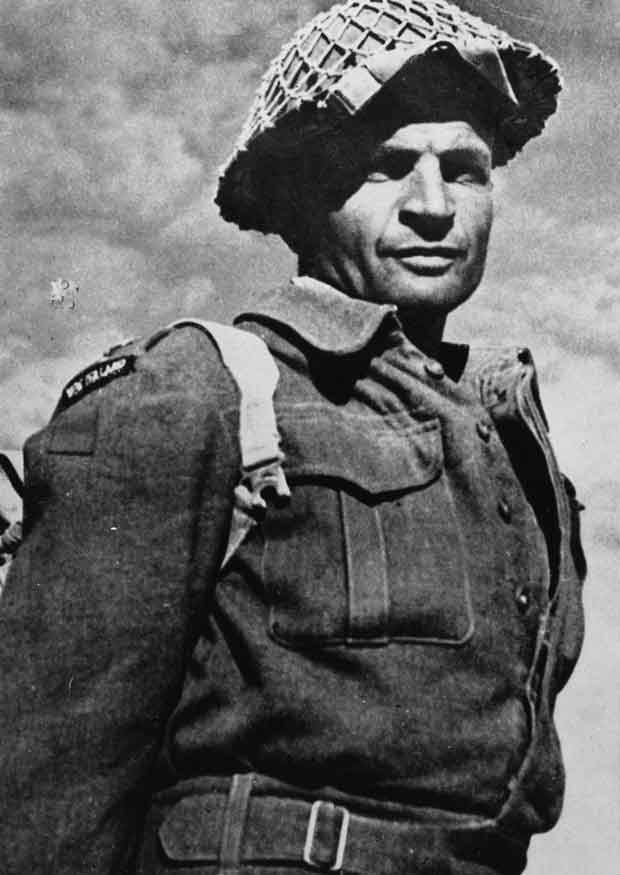 Iconic image of Charlie in helmet and battledress famously used to great effect on the cover of Mark of the Lion.

Charlie Upham was a huge character in my childhood, as he was to probably every kid of the 60s and 70s growing up in Canterbury, the province to which he returned and farmed overlooking the Pacific Ocean near the mouth of the Conway River. Mark of the Lion, by Ken Sandford, the first (and until Tom’s just-released book, the only biography of Charlie Upham) had an important place on my father’s bookshelf. I recall Dad giving it to me to read. Mark of the Lion sat alongside such significant titles as Irving Stone’s The Agony and the Ecstasy (a biography of Michelangelo Buonarroti) and Morris West’s The Shoes of the Fisherman (a Russian Communist becomes pope – fiction).”

Tom’s handsome tome would hold pride of place in the august company on Dad’s bookshelf. Dad met Tom once, in the 1990s, and was very taken with him. He’d have loved reading this book as will every Kiwi bloke I know. It’s the perfect Father’s Day gift.

What a time for us to be grateful for these supposed national characteristics of resilience and moral courage and to be celebrating and building them into our national psyche. Who isn’t proud to be a New Zealander right now?