Harvesting rainwater and greywater can be a great way to curb your environmental footprint. But regulations, safety and maintenance shouldn’t be overlooked.

Most properties can support some sort of simple rainwater collection system to use on the garden (note, rainwater that hasn’t been treated can’t be consumed). Greywater can also be reused outside.

Generally, rainwater running off a roof area is collected into a tank or similar. Use gutter guards to cut down on debris that could foul the water and impede its flow. Make sure the tank has a cover and a screen where the downpipe empties into it to stop insects from getting in and breeding. 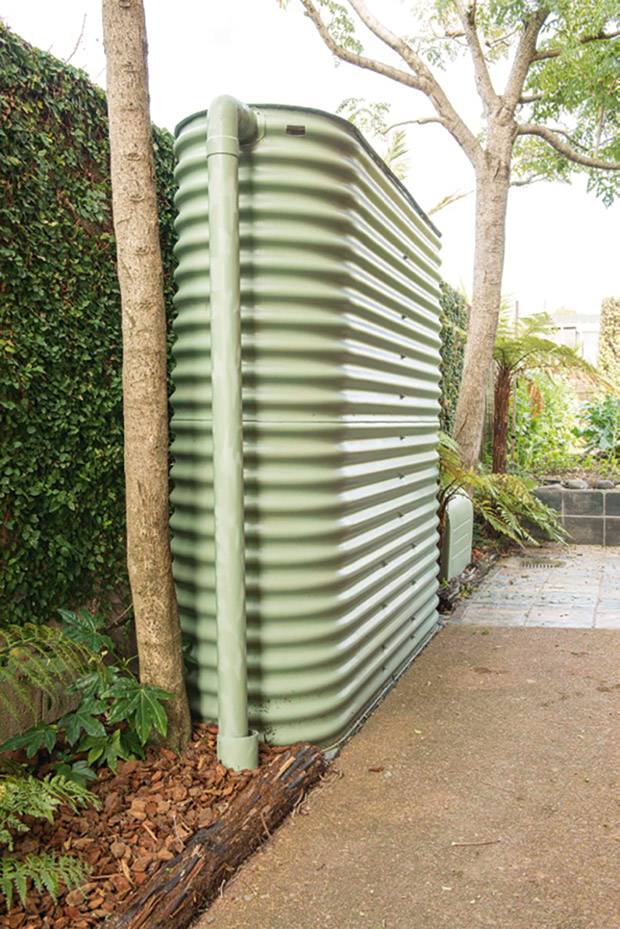 Many local councils encourage households to collect rainwater, both for watering and for emergency use. Some even subsidize the tanks, so check the local council’s website.

THINGS TO THINK ABOUT

Watch out for nasties: If there’s air pollution, contamination from lead in the roof paint, or a lot of animal droppings on the roof, the water may be too contaminated to use, even for watering the garden.

Water used for washing (greywater) may be used to water the garden and is particularly handy during droughts. But it must be done carefully.

Greywater can’t be used for drinking, cooking, washing (even clothes), and shouldn’t be used on food plants as it likely contains bacteria. Blackwater is water that contains human waste and must never be reused.

A greywater system is a lot more complicated than a rainwater system. It must be properly installed and maintained, and the water use must comply with local body rules.

The system recycles water from the washing machine, shower or hand basin. Simple systems have the grey water distributed directly into the garden or stored in a holding tank — with an overflow outlet to the sewer — for later distribution. 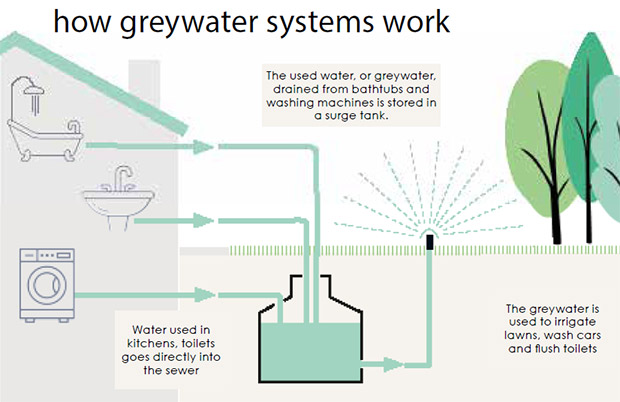 Either way, the system should include a filter to remove any food/grease/hair/soap/clothing fibres before distribution to minimize contamination and to stop the system blocking. Greywater from the sink cannot be reused because of the risk of bacterial contamination from meat and other foods

Discharging: Greywater should ideally be discharged below the soil (about 10cm), rather than sprayed on top. Use a branched distribution system through the ground, so the water is spread widely and isn’t allowed to pool on top of the soil.

About 20 per cent of a household’s water use goes down the toilet. However, a composting toilet — where faeces and other organic material, such as sawdust, are composted through a controlled aerobic process — uses no water for flushing.

Urine must be collected separately and usually it’s siphoned separately through a funnel as the compost must stay as dry as possible.

Composting toilets are less common in urban freestanding houses as they can’t be used anywhere there’s access to a sewer main unless the consent authority grants a waiver.

Not for the veggies: Make sure greywater is never used on vegetable gardens that are harvested regularly or near children’s play areas.

Council requirements: Check council requirements about how greywater can be stored and restrictions on its use. These include minimum discharge distances from boundaries, waterways, wells, bores and the sea, and how much can be discharged each day. Maintenance: The filter must be regularly cleaned of the food or fibres that will collect in it and become fetid. Be careful of contamination if cleaning filters.

Include a sewer connection: Ideally, a greywater system should also be connected to the sewerage system so water that’s not safe to use on the garden, such as that containing harsh chemicals or faeces, can go straight to the sewer.

This is an extract from our special edition In Your Backyard: Living Lightly

Keyhole gardens: How this 1990s garden design is helping farmers combat extreme weather and climate change in the Pacific