This week in the water cooler: we make our own cheese, share our award-season movie picks and try out icing therapy. 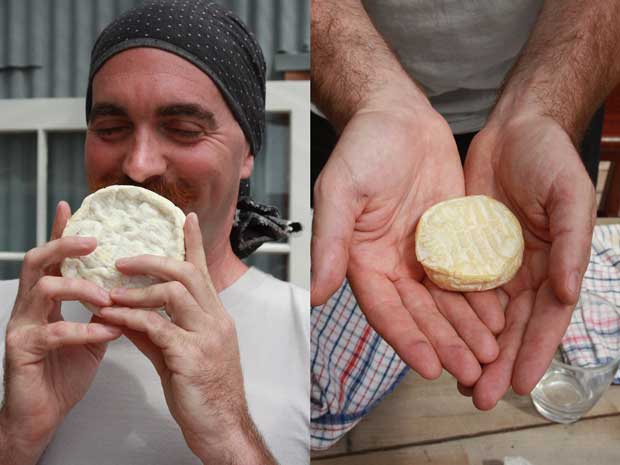 David Asher, a cheesemaker and teacher from the Black Sheep School of Cheesemaking in Canada, is currently touring New Zealand running cheesemaking courses. Last weekend in Waihi I got to spend a morning with him and another 19 enthusiasts learning about cheesemaking at the most natural level. Instead of using commercially available packets of cultivated, dried and foil-wrapped bacteria, David uses bacteria naturally-occurring in good quality milk and in the natural environment. It might sound terrifying, but it’s a fascinating thing to do, and the result is delicious. 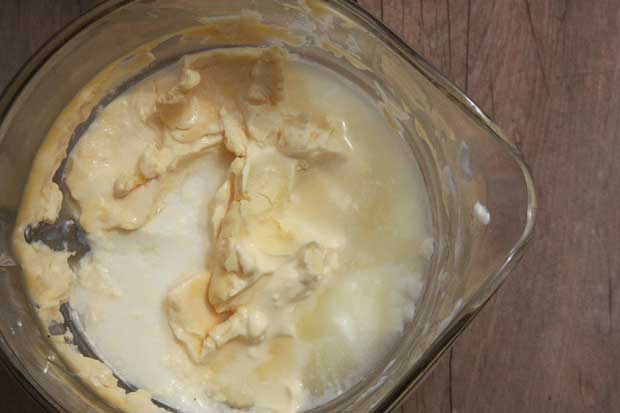 In this jug is fresh, raw and unchilled jersey milk, left on a kitchen bench for three days. This won’t work with pasteurised milk nor chilled, raw milk.
The thick yellow cream has risen to the top (jersey cows produce a far yellower cream than other breeds). It tastes like no other cream, and I know this because I took a big scoop of it. Ahh, the memory is still a delight.
Underneath, the milk has become a pale jelly, called clabber.
Clabber tastes like a very light, airy sour cream and is the result of a completely natural fermentation process in which natural bacteria in the milk converts lactose (sugars) into an acid, souring it slightly.
It was traditionally used in baking in place of baking powder, can be used as a starter for cheese-making, or if strained it through cheesecloth, the most natural kind of soft cheese in the world. Cheese at its very easiest and most natural.

ICING ON THE CAKE

I absolutely love to bake, however, my cake decorating skills are limited by my inability to draw anything other than a stick figure. Words, sure. Pictures, nope. But a girl can dream and dream I do thanks to the wealth of talented cookie artists popping up on Instagram and Facebook. The short and sweet videos are my new go-to whenever I need to give my mind a break – it is so soothing watching the piping and brushstrokes. The options are endless but two of my favourites are The HayleyCakes from Texas (whose videos are reaching around 100,000 views) and Sweet Ambs (with one million followers).

Case in point? I started writing this around an hour ago but have only just emerged from the inner circle of cookie heaven. My mouth is watering, and I’m now terribly late, but at least I’m calm!
Looking for more inspiration? Buzzfeed has a roundup here – clearly I’m not alone in this obsession
Cheree Morrison
Staff Writer

THE BEST FISH AND CHIPS 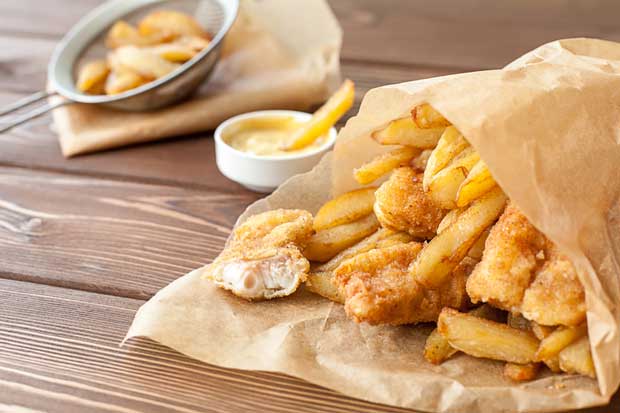 I’m going to make a potentially controversial declaration: I may have eaten the best fish and chips in New Zealand. I discovered the culinary delights of Waihola Fresh Fish, between Dunedin and Milton, on my recent southern sojourn. The light and absolutely delicious fish was battered and cooked as I waited. Lemon slices and white bread and butter were ready to go for an easy chip butty. Splash out a little extra for the blue cod but whatever you do don’t go to nearby Lake Waihola to eat them. The New Zealand version of Hitchcock’s The Birds is not recommended.
Tracey Yearbury
Advertising Manager
NZ Life & Leisure

Quokkas are nocturnal and generally come out in the late afternoon. This curious fellow was near my hotel Karma Rottnest.

My Christmas break highlight was a visit to Rottnest Island, off the coast of my hometown of Perth in Western Australia. The Dutch named the island rotte nest (“rats’ nest”) after discovering its population of cat-sized furry marsupials which they which they mistook for giant rats.
The quokka are current darlings of the internet following an article in 2013 in the Huffington Post claiming they “smile”. Visitors try to capture the supposed quokka smile in selfies. Look up the hashtag #quokkaselfie. Wikipedia says “This, combined with the relative lack of predators on the island, has caused some to give them the moniker “the happiest animal in the world”.” 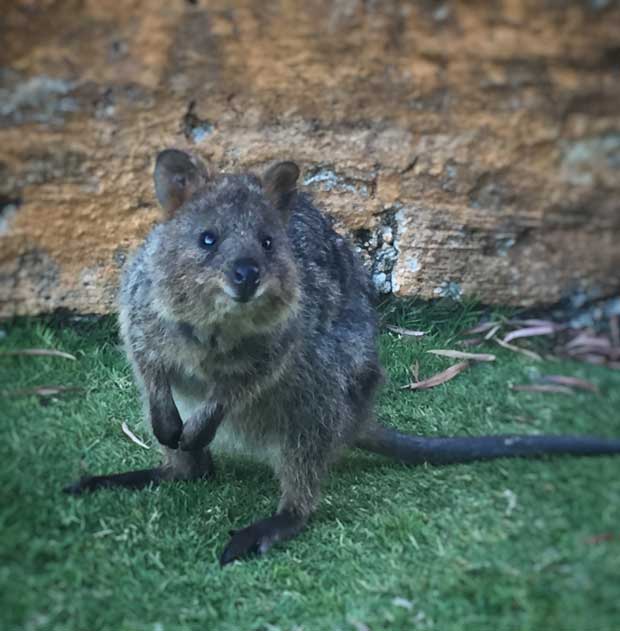 Is this quokka smiling?

I’m not sure how much the quokka are enjoying all the attention: I saw people in some very weird positions, lying on roads and in the bush, trying to capture the #quokkaselfie.
Rottnest’s only transport is by bike. With plenty of energy one morning, I took advantage of the pedal and flipper hire deal and headed to a remote white sand beach to go snorkelling. 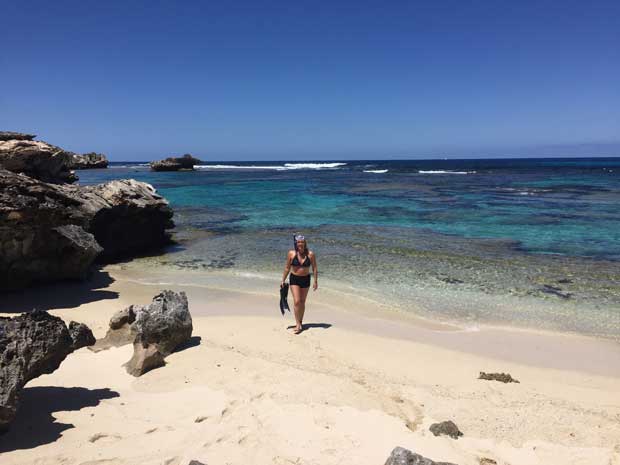 Snorkeling at a cove past Salmon Bay, on the south of the island.

Being an A-class marine reserve there were plenty of fish and coral in the clear, teal waters and it was a breath of fresh air to have a whole bay to myself even in the middle of the school holidays.

More stories you might like:
Water cooler: Dunkirk review, garden goals and why it's good to be a bag lady

It’s the best time of year for film lovers as all the good movies are released just in time for award season. La La Land scooped up the bulk of Golden Globe Awards – click here to listen to the Screen Sirens review if you haven’t already – but if musicals aren’t your cup of tea, critics have also been singing the praises of these other films. Lion, in cinemas now, stars Nicole Kidman and Dev Patel and is the tale of a young Indian boy adopted by an Australian couple after he being separated from his family. He returns to India as an adult to try and find his birth family. “It’s a bit of a tear jerker, but you come out feeling good,” says Ian Walker, our normally hard-nosed production consultant.

Aucklanders and Wellingtonians are the only ones lucky enough for a chance to see Moonlight on the big screen.

This limited-release arthouse flick picked up the Golden Globe for best drama and set in Miami during Nixon’s War on Drugs era, follows a boy growing up in a hard neighbourhood and struggling with his sexuality.

Also in theatres is Jackie, the drama following Jackie Kennedy in the weeks immediately following the assassination of her husband John F Kennedy. While Natalie’s impression of Jackie is uncanny (watch the 1962 archive clip below from the televised documentary A Tour of the White House with Mrs. John F. Kennedy), I found director Pablo Larrain’s treatment of the events melodramatic and perhaps more appealing for an American audience. Fellow Screen Siren reviewer Yolanta disagreed with me, saying it’s a powerful depiction of grief. That’s what good films do, they provoke thought and good conversation.
La La Land, Lion and Jackie are in cinemas nationwide. Moonlight screens in two exclusive locations; Rialto Newmarket and Lighthouse Cinema Cuba in Wellington