What is aquafaba? How to cook with the vegan substitute for egg whites (plus: how to make vegan chocolate mousse) Does the chickpea cooking liquid live up to its hype? Food editor Lucy Corry does some digging.

If there was an award for least likely cooking ingredient, aquafaba (a made-up Latin name for the liquid in which chickpeas and other legumes have been cooked) would surely win it hands down.

It’s unappealing to look at, smells a bit iffy and tastes exactly as you’d expect – but in the right hands, it has the power to mimic whipped egg whites, enabling vegans and other egg-avoiders to enjoy all manner of meringue-y, marshmallow-y delights, not to mention mayonnaise and aioli.

It sounds like the ultimate internet ruse, but aquafaba’s miraculous powers were discovered by a French opera singer. Joël Roessel – a vegan in a country where animal products are revered –started experimenting with chickpea cooking liquid back in 2014. He published his findings on his blog and things grew from there. 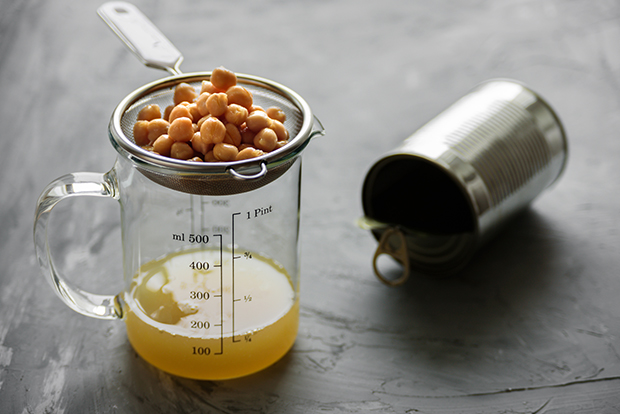 American software engineer Goose Wohlt (who apparently coined the term ‘aquafaba’) published his riffs on Roessel’s findings to a Facebook group and before you could say ‘vegan pavlova’, every man and his dog was whipping up a storm. Now, the ‘Aquafaba (Vegan Meringue – Hits And Misses!)’ Facebook group has more than 90,000 members and you can’t move on the internet without being assailed by wonder recipes on all sides.

Do they all work? I have to confess, I was skeptical. For every three people claiming aquafaba has changed their lives, there’s usually at least one or two saying, “I tried this recipe and it didn’t work”. I’m no vegan, but I hate food waste and love the idea of making something out of nothing.

More stories you might like:
Outstanding New Zealand food and drinks to add to your shopping trolley

Aquafaba is pretty amazing but, like everything, it can take some people a while to get the hang of using it. Here are five things you need to know before you embark on any aquafaba recipe:

If you cook chickpeas or other legumes at home, you can simply save the cooking liquid rather than have to buy the tinned variety. Once you’ve cooked the beans, return the cooking liquid to the pot and let it bubble away over medium heat to reduce by 20-30 per cent.

2. It doesn’t have to come from chickpeas.

According to my own experiments, the liquid fluffs up much more successfully if you chill it well before you use it. You can also freeze any leftover liquid.

Don’t even think about attempting an aquafaba recipe without some kind of machinery. It doesn’t matter how strong Nana’s old rotary beaters are, your arms will conk out before the aquafaba even begins to fluff. If you have a stand mixer, electric beaters or (if you’re making aquafaba mayonnaise) an immersion blender, use them.

And if you like the idea of using aquafaba but want to start small, I highly recommend Ruth Pretty’s incredible hummus, which uses chickpea brine. This sweet treat will please vegans and surprise omnivores. Make sure the chocolate you use is vegan – I recommend Whittaker’s Dark Ghana – and that the aquafaba is well chilled.

Using a double boiler or a microwave on low power, melt the chocolate. Set aside to cool.

Using a freestanding mixer or electric beaters, whip the chilled aquafaba for five minutes. Keep beating while gradually adding the sugar, then beat for at least another five minutes until the mixture looks like glossy meringue. If you can tip the bowl upside down without the aquafaba foam sliding out immediately, it’s done. If not, keep beating.

Using a large metal spoon and an up-and-over motion, carefully fold in the cooled melted chocolate and the sifted cocoa. The mixture will deflate when you add the chocolate, but try to keep as much air in it as you can.

Pour into a glass serving bowl or divide between four small glasses or cups, cover and chill for at least two hours before serving.